Language
What do you get when you blend the best of the digital and analog synths together? In the case of the Roland JD-XA, a huge sound with powerful effects and so much more to enjoy.

Roland is one of the world's biggest manufacturers of music hardware and in recent years has been moving towards returning to its roots as a builder of fat-sounding analogue kit after many years working largely in the digital domain. As you might expect, the digital side still plays a part, with features added that modern users expect. The AIRA series partly uses digital modeling of analogue circuits, but other elements of it are truly analogue. If you look at the design of the company's recent products, it's clear that people love synths that look, feel and sound retro but don't carry the burden of actually being rare or hard to maintain. Things have in some ways come full circle.

The JD-XA takes this idea to the next level. It's a synth with both analogue and digital sections that can be used independently or together with a remarkable degree of flexibility. It's a truly hybrid instrument that blurs the line between old and new in a way that is sure to have electronic producers queuing up to try it out. And you'd be hard pressed to miss it: it's gorgeous to look at, with most controls backlit with an enticing red glow, so it's possible to see and use all the controls even on a dark stage. Clearly, Roland knows people will want to play this live just as much as in the studio. It's lighter than you'd imagine too, but still with a solid build quality.

"It's lighter than you'd imagine too, but still with a solid build quality."

Around the back, you can really see the hybrid nature of the synth on display. There's a headphone out of course, plus stereo or mono jack outs, an analog dry output for bypassing the effects section when using the analog component, and a click output. An XLR mic input with variable level lets you use your voice either for vocoding or as a modulation source to modify sounds. On the other side are two control pedal inputs plus a hold pedal input and then twin gate and CV output connectors that can be used for controlling other CV-capable hardware using the synth's analogue section. There's hardware MIDI in and out as well as a USB to computer and USB memory port to bring the instrument into your computer's world. 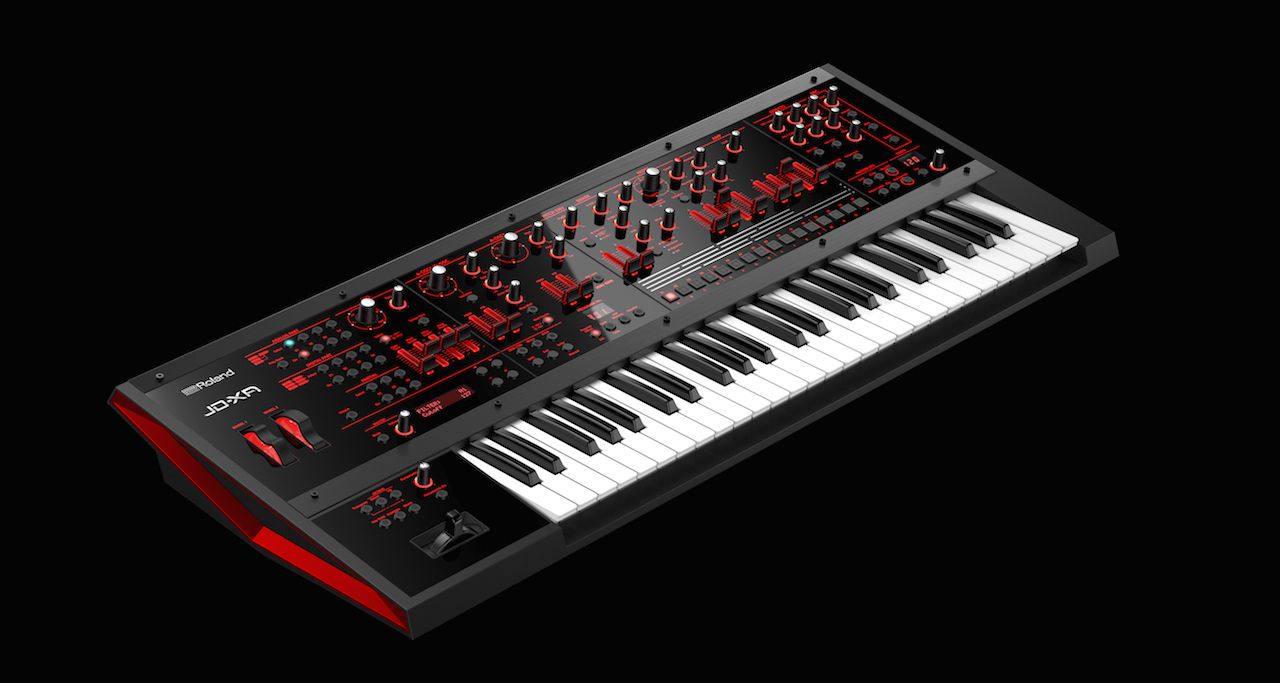 Two Brains are Better than One

The JD-XA has two 'brains', one analogue and one digital. The analogue side has a four-part engine with true analogue filters and as mentioned above, a direct dry output available. Each part has two oscillators, filter and amp sections and four envelopes with fast attack and response times. You also get two LFOs and the ability to send the signal to the digital FX section inside the synth. The digital side comprises a four-part, 64-voice sound engine that uses Roland's SuperNATURAL technology and is compatible with INTEGRA-7 sounds, many of which can be downloaded for free at Roland's Axial website.

"The analogue side has a four-part engine with true analogue filters and as mentioned above, a direct dry output available. The digital side comprises a four-part, 64-voice sound engine."

The top panel is logically laid out and controls are grouped by section. Your first choice is which engine to use, or indeed whether to use both together by switching them both on. For each activated and selected part, the majority of the parameters on the front panel will control your current selection with a small but serviceable LED screen showing you what you're currently editing. You do have to move a control to make the screen switch to display its parameters, unlike on NI's Komplete Kontrol for example where the knobs are capacitive and become active just by lightly touching them with a finger. In fairness these are very different products: where Komplete Kontrol is just a controller, here the sections are more set in stone and the instrument has a more dedicated focus. Still, touch sensitive controls would be an amazing addition.

Load up a sound or start from scratch and you're in synthesis heaven. You can select and tweak oscillators, filters and envelopes for each of the active voices and the filters are incredibly fat and smooth. The oscillator section has cross mod, ring mod and OSC sync modes, all of which can be used at once, and a mixer section with an aux stage for adding noise or mic input as well as high pass filter and drive controls make it easy to quickly morph and mangle sounds. There's even a 16-track pattern sequencer (8 internal, 8 external) and a performance section for animating your patches. Located on the left, you can quickly transpose and there's an arpeggio button with key hold functionality as well as a mono button for playing things like bass parts. Portamento on/off and time also have a dedicated control.

"The effects sound fantastic, and pushing the analogue engine through them is particularly rewarding as you hear the fat synth sounds given even more depth and punch thanks to the digital effects."

The effects section is really powerful too and you get a processor for each analogue and digital part with a total of 67 effect types plus five system effects processors. There's the usual delays, reverbs, compressors, bitcrushers and EQs and also some more unusual stuff like vinyl effects. These are selected using the knobs in the effects section and then tweaked using additional dials. The effects sound fantastic, and pushing the analogue engine through them is particularly rewarding as you hear the fat synth sounds given even more depth and punch thanks to the digital effects. The keybed is well-suited to these kinds of sounds, and there are manifold other features like two physical wheels, Unison mode for even fatter sound, Poly Stack for generating chords and onboard tempo management as well as the ability to link to your Mac or PC.

The JD-XA sounds phenomenal, able to produce the kinds of extremely dense, animated, rich sonic textures that are so popular in modern EDM. The sheer number of voices on offer and the ability to use both engines at the same time makes it supremely powerful. Just when you think it already sounds massive, adding another voice goes to the next level. Tweak the filters a bit and suddenly it's screaming with raw power.

As may have become clear, this is a powerful synth and you will get the most out of it by understanding something about synthesis. Roland claims its design is intuitive and this is true, but in giving you such total control over so many sound engines it also demands that you spend some time learning how it actually operates. A complete novice probably isn't going to spend this much on a synth and with an idea about how synthesis works, you'll figure the instrument out pretty quickly. But the kinds of sounds this can make, and the incredible hands-on control it offers mean I wouldn't be surprised to see it gracing some pretty big stages in the future.