Rode is perhaps best known for its excellent studio microphones, but the Australian company long ago diversified into the fast-expanding live sound and audio for video fields. I myself have used their Reporter handheld and the wireless RodeLink Filmmaker Kit microphones in many live situations and always found them to perform to the highest standard. Now, the company has taken things to the next level with two new products, available separately but designed to work together. Wireless Go and Lavalier Go are ultra-portable recording solutions for video or broadcast sound recording that embrace the latest technology to keep things as small as possible. Let’s start with the Wireless part of the equation. 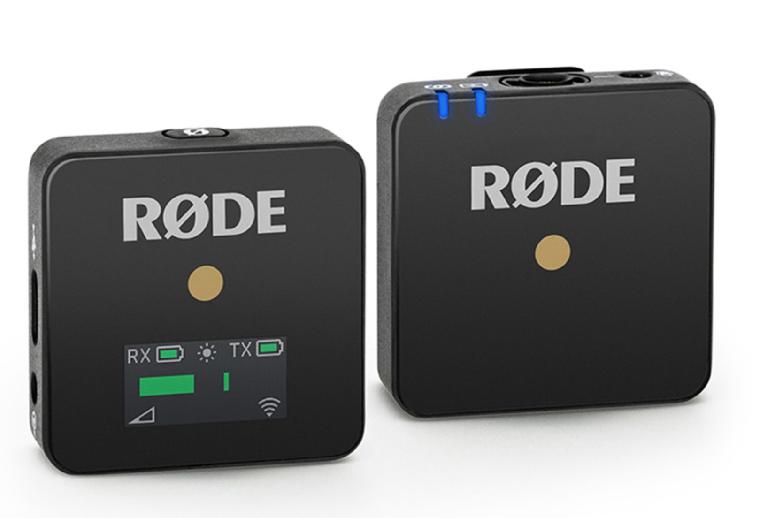 This duet of wireless modules is in many ways an evolution of Rode’s earlier wireless recording system aimed primarily at those capturing voice for video. It’s smaller, lighter and more hi-tech and includes pretty much all the things I’d have said I would like to see in this kind of device. There are two units - transmit and receive, and setup is a breeze. They come pre-paired, though you have the option of manually re-pairing them if you need to mix and match other Wireless Go modules into a system. Rode says you can use up to 8 of these units in a single location.

They use the 2.4GHz wireless band to communicate and have been designed to cope with very congested environments like convention centres where there can be hundreds of different networks and devices in play all at the same time. I have actually never experienced any interference issues with Rode’s wireless systems so if they have improved it from how it worked before, that can only be even better news. The connection is also 128-bit encrypted, so nobody will be able to eavesdrop on your signal. 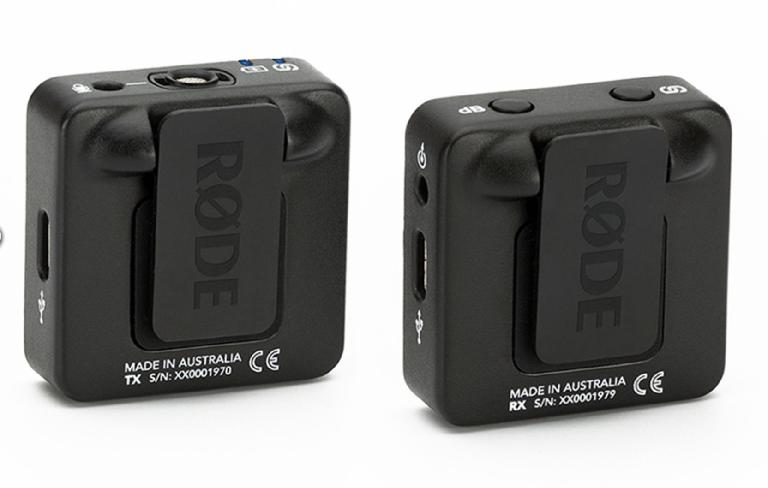 The units have rechargeable internal batteries and there’s USB-C for charging and firmware updates. Not using standard AA batteries has allowed Rode to make the housing far smaller, since you don’t need to be able to open the case. USB-C is becoming very common now, and seems likely to be a fairly future-proof choice of power option. Rode quotes up to 7 hours battery life on a full charge, and charging is pretty fast. You can also power directly over the USB-C port, meaning the system can still be used even if you run out of charge and don’t want to wait for a recharge. Two USB-A to C cables are provided so you can charge both Tx and Rx units at the same time. 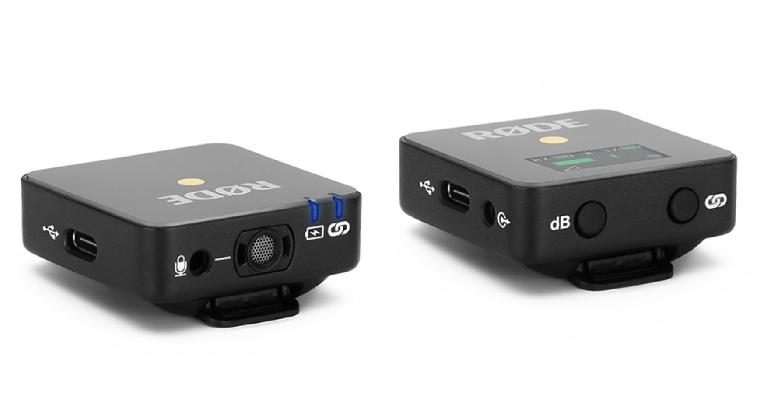 There’s a TRS mic input of course, of which more in a moment - but a clever addition is an omnidirectional condenser microphone built into the transmitter unit. This means that you can use it without adding an external mic - simply clip the transmitter to the person speaking (its small size means it’s possible to clip it inside a shirt for example without it being too prominent), and you have a working mic signal all ready to go. There are three gain levels available by pressing the button on the side of the transmitter - 0, -12, and -24dB, to compensate for either quieter or louder environments. I found the middle setting to be fine for most general uses. You also get two small fur windshields to deal with wind noise when working outside.

Another really nice touch is that the clips on the receiver and transmitter double as a hot shoe mount for your camera, which means no more struggling to affix the receiver to the camera cage or trailing wires from your belt or pockets (unless you want to). Pop the receiver into the hot shoe mount on a camera and it sits safely there, unobtrusive and working away. Connect it to the audio input on your camera or other device using the bundled cable and you’re good to go. It’s a great idea and one that videographers will welcome. Rode’s promo video even shows the system working with an iPhone and AirPods, making for a wireless mic, recording and monitoring system using just these units and your Apple gear, so it’s not just for people with expensive DSLRs. 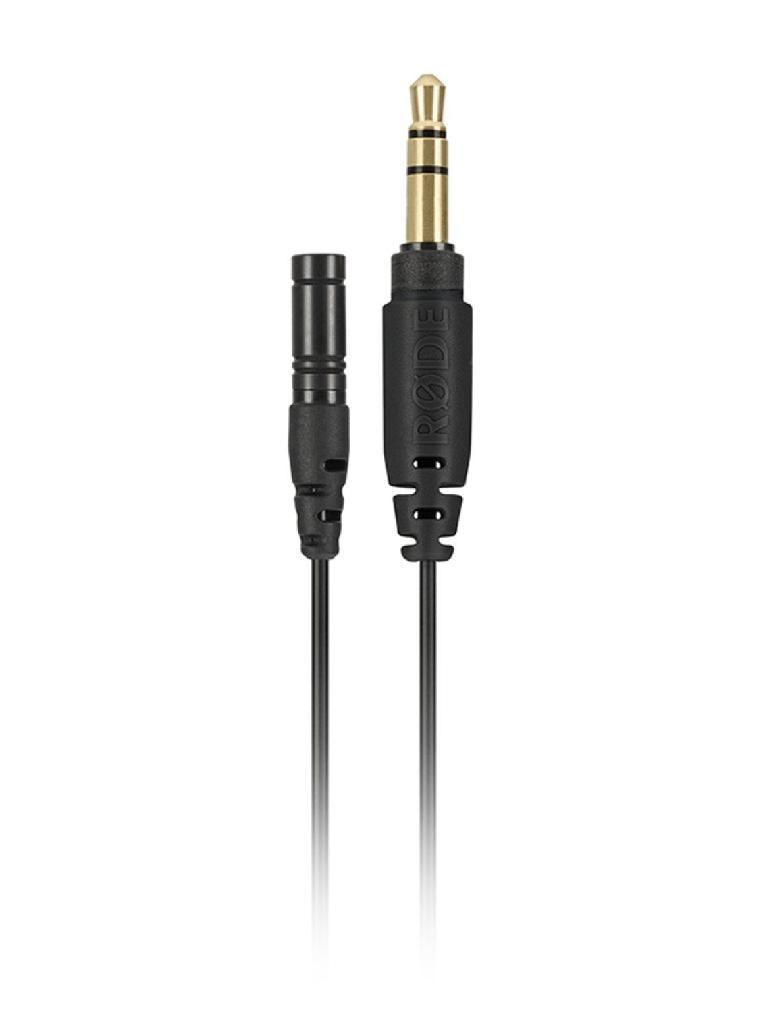 Having mentioned the Wireless Go’s built-in mic, there are times when you do need your on-camera mic to be as invisible as possible. In these cases you can use a lavalier mic - and Rode has made one to partner this system. The Lavalier Go is a broadcast-grade omnidirectional condenser mic with a 4.5mm capsule. It comes with a mounting clip, a foam pop filter and uses kevlar reinforced cabling to cope with the inevitable tangles and knocks that this kind of gear gets when it’s in use out in the wild.

It draws its 2.7v of power from the TRS socket in the transmitter unit, and will work with any mic system that can supply this. Similarly the Wireless Go will work with other lavalier mics, but since these two have been designed to work perfectly together it would seem to make sense to use them in tandem.

This system works like a dream. The setup is so simple that even beginners will find it very easy to get up and running, and once you’re going there’s very little to tweak or change except the pad settings for volume. Audio recording results were excellent and I experienced no lag or interference, or dropped connections. Battery life seemed very solid and in line with Rode’s figures. The built-in mic did a great job and adding in the Lavalier made the system almost invisible while maintaining excellent pickup and recording. if you are doing any kind of voice or broadcast recording, from run and gun on an iPhone to gimbals, DSLRs or larger video systems, this is an affordable and elegant solution that performs brilliantly.

Learn much more about microphones and recording: https://ask.audio/academy?nleloc=new-releases

iain gordon
A very goor review of Rode Go. What is the scope of this system specifically wrt recording choirs ? This is my interest and I have not seen in any reviews a mention of the scope of this mike OR is it considered only for voice recording ?
Thanks in advance.
Iain Gordon