Language
If you are making dance music, industrial noise, or creating sound design for games that require a little more 'edge'... You'll want to get hold of Rob Papen's RAW - a gnarly synth with attitude.

As a skateboarding, blog-writing, electronic reporter, living in the aether, I tend to get my demos of any, and all new products through the magics of the interwebz. However, recently, roaming through epic, florescent-lit halls of the monstrous Anaheim Convention Center, aka NAMM 2015, I actually got a demo from synth legend, Rob Papen, himself, demoing his new synth known as Raw. Even through the circus of booth babes and BS, I was able to hear the raw power of this synth. And, now that I've had a little time since NAMM to get my head around it, I'd like to share my thoughts with you.

Where most of the Rob Papen synths tend to have more of a rounded, futuristic look, Raw, aesthetically, has for obvious reasons been kept more minimal, and well… metallic. It's a little jarring at first, because you're expecting the usual, visual 'zing'. And yet, even as I reread the first sentence, of this same paragraph, the visual description is fully descriptive of the name, and sound. The visual presentation is simple, and yet jarringly raw. Okay, Mr. Papen, you made me say it. 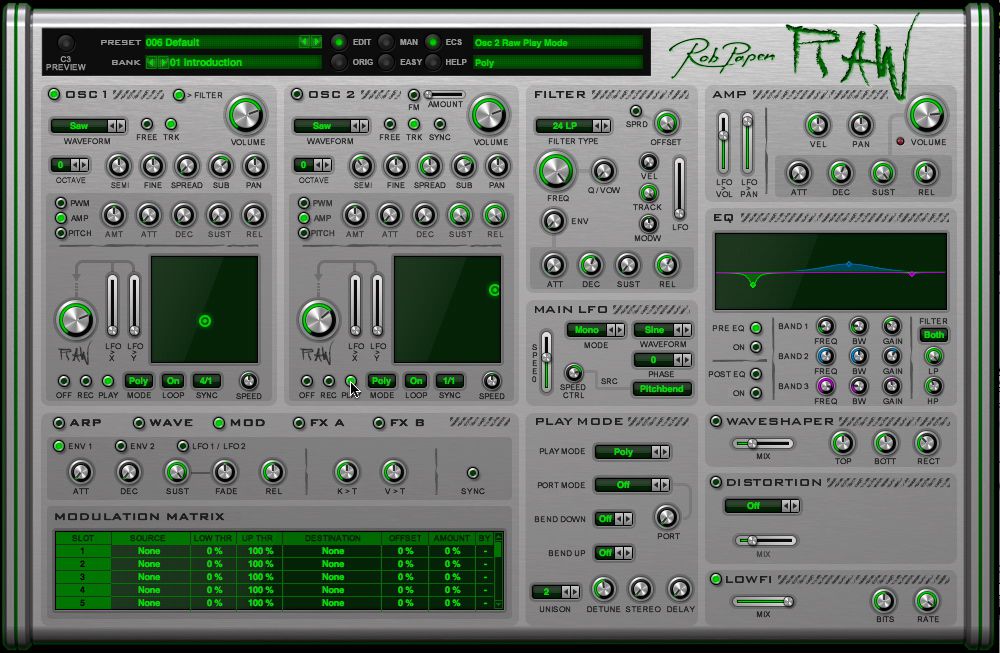 Raw steps up as a modern synth that sonically adapts much better than its forebears to the current market trends, where distortion and 'grrr' is becoming more and more prominent on the dance floors.

Raw is the destructive younger brother of the synthesizer clan of Papen. Where Blade, Blue II and Predator have given us amazing, phat, ominous patches of heavenly delight, and terror, Raw differentiates itself with more of a unique, signature sound that really is, in some sense, kind of its own thing. And, in another sense, Raw steps up as a modern synth that sonically adapts much better than its forebears to the current market trends, where distortion and 'grrr' is becoming more and more prominent on the dance floors.

Some You've Seen, Some You Haven't

As I chose the 'Default Preset', I began sculpting my own patch, using Raw. I was unbelievably impressed with just the basic oscillators, right off the bat. I simply selected a Sawtooth waveform and then started playing with the Raw section that appears below both Oscillator 1 and Oscillator 2, and is intended for phase distortion. Raw and its phase distortion is no joke. As soon as you raise a 'Raw' knob on either of the oscillators, things get dirty. And, keep in mind, I haven't even enabled either the distortion, or waveshaper, or a filter. Recording an X/Y pad is seriously easy, as the play and record buttons are right there. And, you even have knobs to have one, or both, of the LFOs modulate what the Raw module is doing. This thing gets wicked.

As I continued to make a lead patch, then a pad, then a bass, I couldn't help but be extremely gratified to know that the standard arpeggiator, effects and filter are included that separate a Papen synth from all the others. And, thankfully, the modulation matrix is present. So, even though modulation possibilities are widely accessible on the front end, you can jump deeper into the Matrix to program more subtle, and astonishing modulation possibilities.

Also, rather than having to select different distortion effects from a drop-down menu, Papen has supplied no brainer effects for a synth that prides itself on distortion, on the front panel. Distortion and a Bit Crusher known as Lo-Fi are easily accessible, along with a really nice EQ. I was actually really excited about this, as I use distortion a lot, these days, and would rather have it easily within reach, as opposed to having to select it, as one would with the Predator, then set it up. And, by having the EQ present, within the synth itself, I don't end up having to waste even more CPU, by dragging out an EQ plug-in, or filter.

Raw is a gnarly synth that has a slew of amazing, modern, and highly useable presets. And, while you may think that all the presets are wobbles and destruction, you'd be surprised to know that there are some really beautiful pads, poly synths, and more. So, don't think of Raw as a one trick pony. Though, I will say this—Raw, as powerful and as modern sounding as it is, might become a chief competitor to the other Papen synths. Raw gives you 'that sound' much quicker, and with much less hassle. And, whoever programmed that JP-8080 patch really knew what they were doing, it sounds just like the real thing. If you are doing any form of dance music, industrial noise, or even sound design for games that require a little more attitude… you'll want Raw.