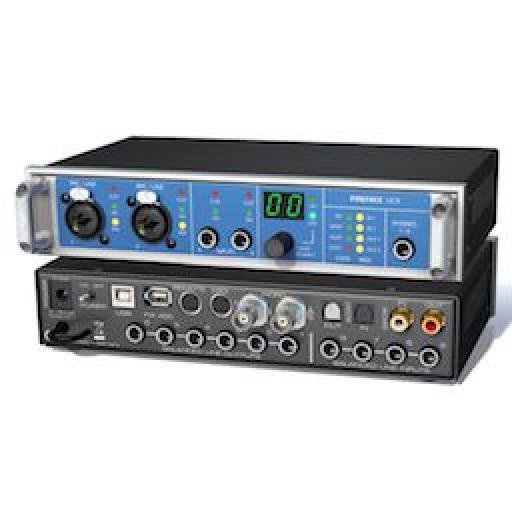 Language
RME are well known for their high quality audio interfaces. In this feature review Mike Watkinson puts the UCX through its paces and finds out that it has a useful trick up its sleeve.

The Fireface UCX is an unassuming audio interface, half rack size in a conservative blue-grey livery, but those clever people at RME have packed 18 inputs and outputs plus MIDI support, together with hugely flexible routing options, great sound and rock-solid build quality into its small form - and the UCX has a neat trick up its sleeve.

The UCX will connect to your Mac via USB 2 or FireWire 400 (you will need an adapter for FireWire 800 or Thunderbolt equipped Macs) and you will need to download the latest driver software installer from RME's website which will also install TotalMix FX, RME's routing and monitoring software (see below). As well as operating in standalone mode, the UCX is also a class 2.0 compliant device which means you can connect it to your iPad's dock connector via the camera connection kit and use it for multi-input and output recording using a suitable app such as WaveMachine Labs' Auria.

Four of the analog inputs are found on the front of the box. Inputs 1 and 2 are Neutrik combo sockets allowing the connection of microphones via XLR or line level signals via TRS balanced jack. These sockets also offer individually switched phantom power if required. Inputs 3 and 4 can accept either line or instrument level signals via balanced TRS or unbalanced TS plugs respectively. Inputs 5 to 8 (line level TRS) are found on the back of the unit along with analog outputs 1 to 6. Outputs 7 and 8 are available via the headphone jack if required. Optical ADAT (inputs and outputs 9-16) is connected via the TOSLINK sockets on the rear of the device. S/PDIF channels 17-18 use the same connectors if optical format is selected, and adjacent to these are found the two coaxial connectors for S/PDIF channels 17-18 if non-optical format is selected.

RME's TotalMix FX software (supplied with the UCX or available as a download from RME's website) is a comprehensive routing and mixing utility that allows control over every parameter of the UCX and has more features (but it has to be said - worse graphics!) than some DAWs. The UCX box does have one single endless rotary digital encoder on the front panel through which some parameters can be controlled, but there are no other hardware controls, meaning that complete control can only be achieved in software via TotalMix FX when connected to a computer. The X in UCX is for '˜extended', meaning that equalizer, filter, echo, reverb, compressor and expander effects are available, powered by the UCX and not by your host computer, and controllable from the TotalMix FX software.

The UCX has the ability to operate as a standalone mixer. You can create up to six configurations using TotalMix FX software, store them in the UCX itself, and then recall them in standalone mode using the rotary encoder control.

Great though this is, it does also underline a possible downside to the UCX. When connected to an iPad, it is essentially operating in standalone mode, but there is no iOS version of TotalMix FX, and the rotary encoder on the front panel only allows the control of some basic parameters such as analog input gain. RME are not however a company to rest on their laurels and it won't be a surprise if they release an iOS version of TotalMix FX in the near future. Or maybe they don't really need to, as you can also control the UCX via MIDI, Mackie Control Surface, or OSC. This is the Open Sound Control protocol as used by Hexler's TouchOsc app. RME supply a free iPad template for the UCX on their website. 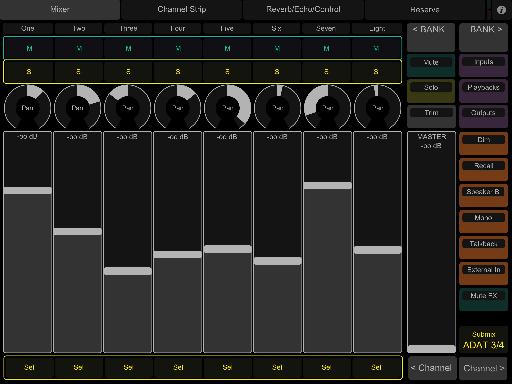 One of RME's TouchOSC templates for iPad - remote control TotalMix FX over WiFi!

The decision on whether to use the UCX with an iPad as a complete mobile recording solution is more likely to depend on the number of mic preamps you need. If it's more than two then you will have to carry some sort of mixer, or look elsewhere, and the fact that the UCX requires mains power will also limit your ability to capture recordings in the field (literally). Checking the information on Auria's website highlights another factor that may influence your decision. Despite being one of the few interfaces not to require a powered USB hub to work in conjunction with the iPad, only the eight analog ins and outs of the UCX are available - other (less expensive) interfaces will provide more ins and outs if you need them, but currently require the use of a powered USB hub. This is a rapidly developing field especially with the release of WaveMachine Lab's multitrack DAW app, Auria, so this situation will no doubt change in the near future, especially with the release of iOS 6. 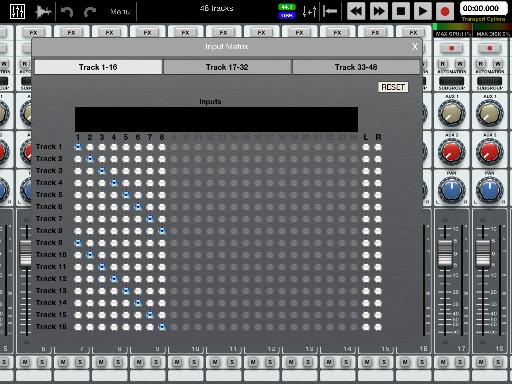 In operation the sound quality of the UCX is of the usual very high standard we have come to expect from RME. The mic preamps are clean, powerful and character-free, and the stereo imaging is stable and precise. I would have no hesitation in recommending the UCX as a high-quality recording in interface for your Mac, and the fact that it also allows multiple input recording when connected to an iPad could be the deal clincher.