Review: Refractor Audio Transport: Beyond the Realm of Sound

Language
Whether you're a fan of Celldweller or not, there's no denying the quality and inspiration in the samples from his new Kontakt instrument, Transport. Sounds designers and EDM artist take note. 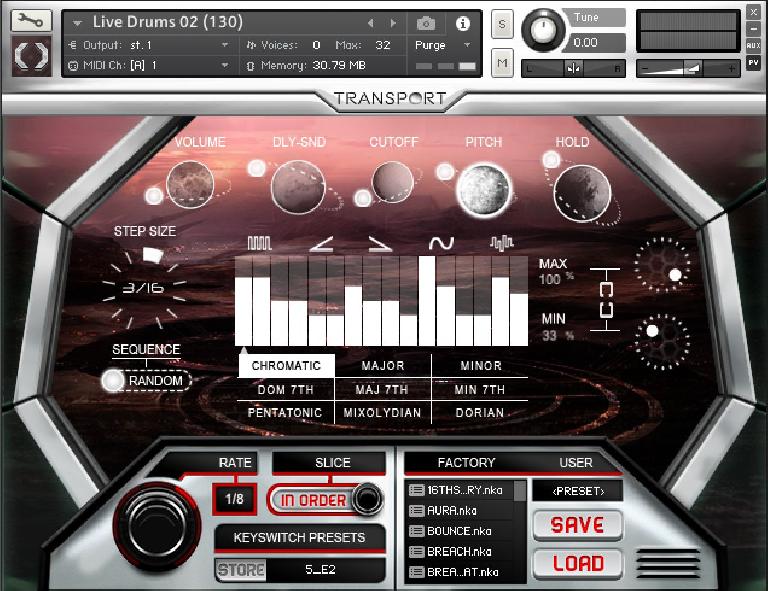 Transport’s Probability Engine underscores all its loop-based instruments. Allowing for polyphonic MIDI input, the Probability Engine juggles between slices of all simultaneously triggered loops at an interval defined by the Rate dial at the lower left of the interface, from a maximum of two bars down to a minimum of 32nd-notes, for more intricately mangled edits. The 1/4-note switching interval seemed to deliver optimally intelligible results with the various drum instruments, while the FX Loops and Score Percussion, for example, were served nicely by higher rates.

The slices can be played either “In Order”—meaning, for example, downbeat slices will only be triggered on downbeats—or toggled to Random, meaning any slice can be triggered at any interval, resulting in slightly less coherent rhythms (which might be just what you’re after, depending on context). 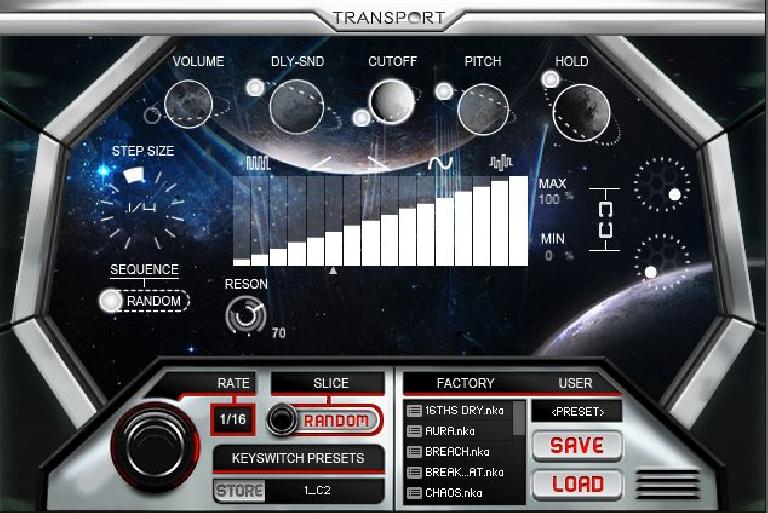 Adding dynamic movement on multiple fronts, five further parameters can be sequenced on top of the probability engine: Volume, Delay Send, Cutoff, Pitch, and Hold. With the exception of Hold, which is synchronized to the Probability Engine rate, the other four sixteen-step sequencers are governed by the Step Size dial to the left of the sequence editor, with available rates from two bars down to 64th-notes for extreme glitch-oriented sound design; dotted rates such as 3/16 and 3/8 are a welcome feature that yields compelling polyrhythmic results.

Simply drag up or down on each step to change the value—or select from the gate, ramp up, ramp down, sine, or random toggles above the sequence editor to quickly define a starting point. Each sequencer can once again be played “In Order”—which in this case means left-to-right in a forward motion—or set to Random, switching stochastically among the available steps. If more than one parameter sequencer is set to Random, their randomization will occur independently of one another. 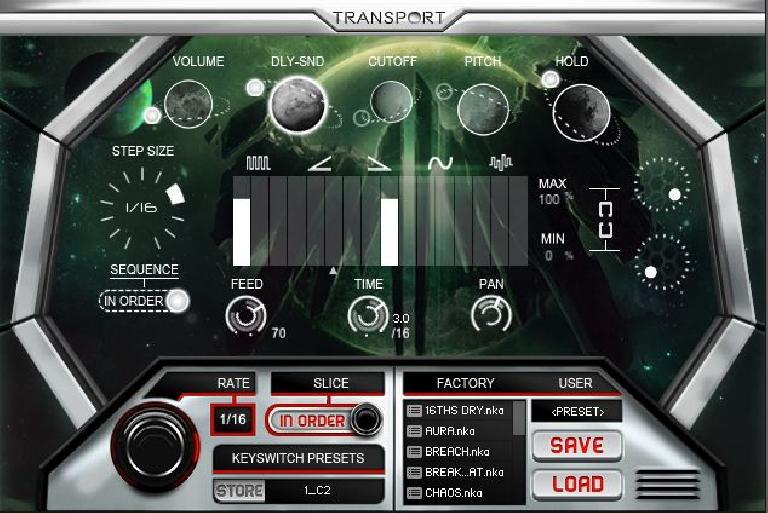 The pair of dials to the right of the sequence editor allows for easy minimum and maximum value constraints for the currently selected sequencer parameters; alternatively they can be combined via the Link toggle button just to their left to define a fixed range for the selected sequence.

The Volume sequencer features a global tuning control and velocity toggle—to receive or bypass velocity input—while the Hold sequencer features simple Attack and Decay controls to shape the triggered sample duration. The Delay section includes feedback, synchronized delay time, and a panning control for width, the low-pass Filter section has a nicely-tuned resonance dial, and the Pitch section features a quantization grid that can be selected between Chromatic, Major, Minor, Pentatonic, Mixolydian, or Dorian scales, along with Dominant 7th, Major 7th, and Minor 7th chords for easy diatonic results.

Factor in the Keyswitching—allowing for various preset states to be saved to and triggered by lower octave keys, along with dedicated repeat and upper octave transposition keys—and it’s not hard to generate captivating performances with a few quick tweaks of Transport.

The impressively presented sound library is focused on edgier material that may not suit everyone’s taste, but anyone producing drum and bass, psychedelic trance, or heavier strains of dubstep—along with video game sound designers and film composers working in darker genres—will surely find plenty of inspiration contained within.

Cons: Sequencer rate is global rather than per-parameter; the Delay line could benefit from some EQ or filtration and a free rate option as well.