If you like the idea of building your own instrument but don't fancy one of the heavier desktop tools, Reactable Systems' ROTOR may be just what you're looking for.

Reactable systems specialises in touch-based, modular software that somewhat defies easy categorisation and its latest product, inheriting DNA from some of its existing ones which have found favour with the likes of Bjork and Coldplay, is ROTOR. Billed as a “tangible modular music synth”, it takes elements of synthesizers, loop players, sequencers and DAWs and blends them into something quite remarkable. But more on that in a moment.

I have always quite liked the idea of building setups containing different devices for generating, triggering and controlling sounds but I could never fully wrap my head around programs like Reaktor or Max / MSP. Though clearly insanely powerful, they were more complex to learn than I was really prepared to commit to, with a whole language of their own. The iOS platform opened up a new way of working – via touch – but it has taken time for apps to be developed that could fully take advantage of it. It’s safe to say that by this point though, iPads (thanks to their larger screens) are definitely capable of being part of a professional workflow. 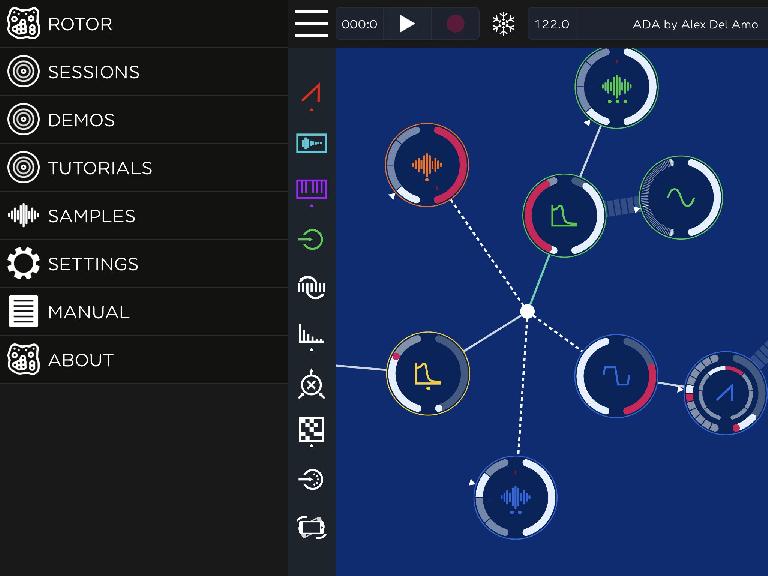 The main screen and menu

Running on an iPhone 4S, iPad Air or Mini 2 or higher, ROTOR is surprisingly lightweight at just under 65MB in size. I used it on an iPad Pro and obviously a newer device is always going to be more powerful but it didn’t feel like it was really taxing the CPU all that much. As with any app that uses its own interface paradigm rather than copying an existing one, there is a moderate learning curve at first as you find your way around.

Actually interacting and making changes is easy, though becoming familiar with all the devices and how they can be manipulated takes a little longer. Luckily the documentation is excellent and there are handy tooltips as well. There are multiple types of device that can be dragged from the column on the left. Although these can only be used once each per project, some like the MIDI sequencers have different behaviours that can be selected once they are activated. 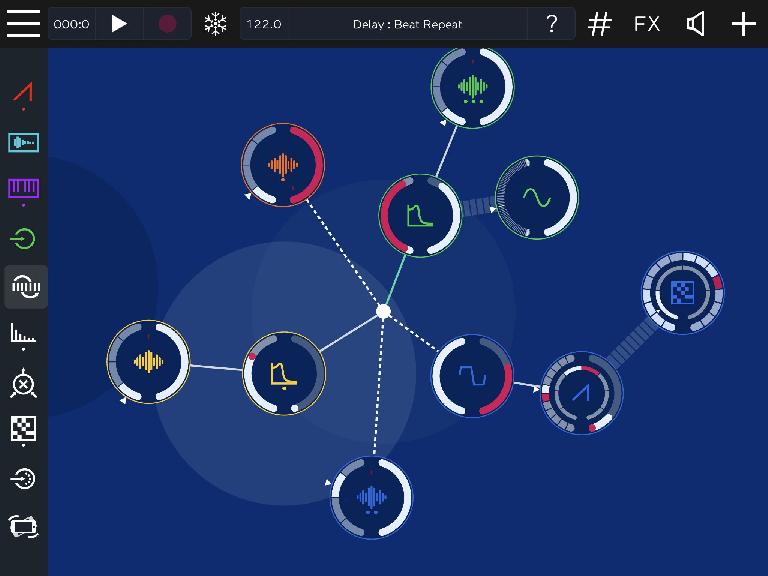 You might start by loading one of the demos and playing with it. The environment is a little abstract but does make sense if you think of it as a sort of living circuit diagram. Any device can be moved around by dragging it with your finger, and the app guesses based on your movements where you’d like to connect it, say for example by placing a MIDI sequencer next to a synth, or an effect between a loop player and the main output. Different kinds of connections are shown clearly: MIDI flow is a broken wide line, audio is a solid line and audio effects and shapers are denoted by a tightly spaced broken line. Some modules can transmit more than one kind of data. 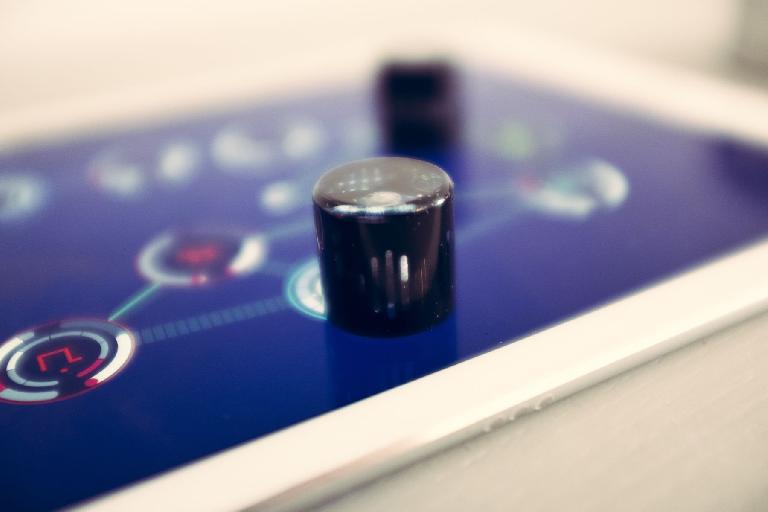 At this point I have to mention the controllers, optional extras available from here http://reactable.com/product/rotor-controller-set/ that provide an alternative way of controlling modules. Although modules can be easily controlled with a finger, for changing volume, selecting dry / wet levels or selecting loops and so on, these specially designed controllers take things to the next level. They are made of clear plastic but with small dots on the underside, which somehow register with the iPad’s screen. 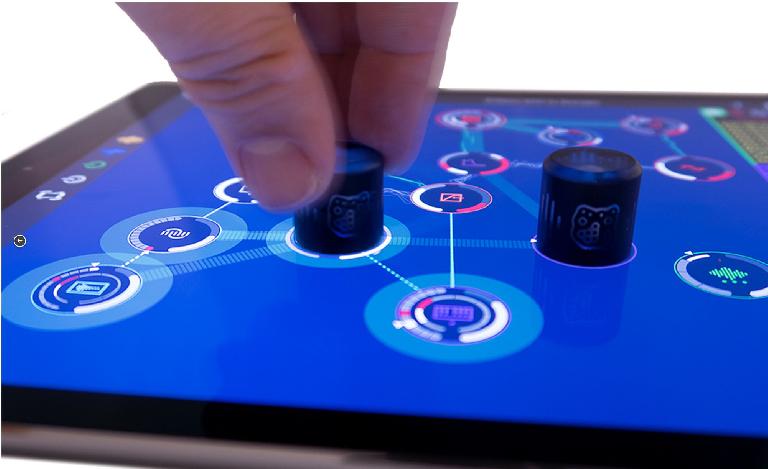 When you place them onto modules you get a wider view of the parameter display (so they’re not obscured by the controller itself) and you can make changes and also drag away from a module to create parameter changes, which isn’t possible with a finger. You can see it in action below. The controllers certainly add a more tactile element to the app and if you are planning to perform with it (which is a lot of fun) then they are definitely worth getting hold of.

Double tapping with your finger on any module or indeed tapping once with a controller opens a control panel. The functions available vary depending on the module but you get access to pretty much every setting for that module including factory and user presets. So for a filter you can choose type, ADSR and an X/Y pad. For a synth: waveshapes, MIDI control, a mini sequencer and more. For sample and loop players: tuning, looping, sample select, and for sequencer modules there’s also a small MIDI grid sequencer you can program for each one. Essentially this is how you tweak your modules, and it’s a really good way of working. There’s a “freeze” button too, which stops modules from being draggable while it’s active and is useful for performance when you don’t want to accidentally unlink any modules. 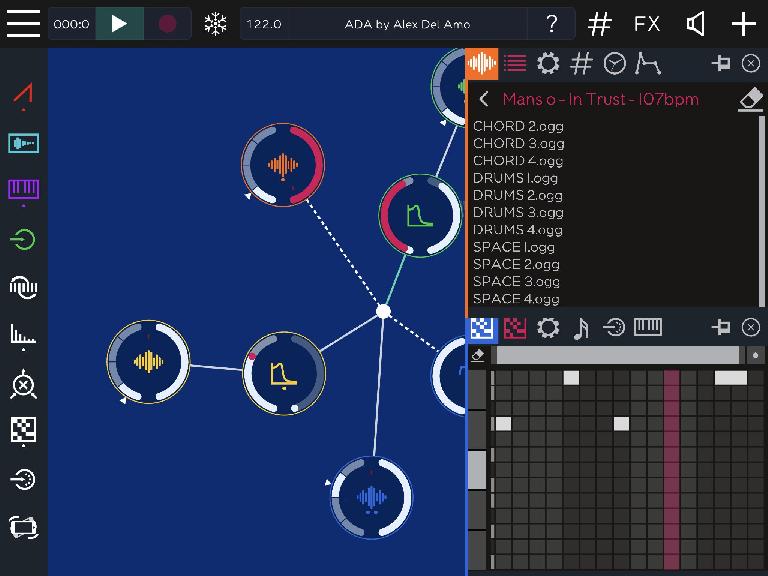 As well as having the internal modules, ROTOR can of course accept MIDI and audio input and output via IAA and Audiobus so it can be connected to other apps on your iPad. It also has automatic realtime key and tempo detection so that samples, loops and sequences stay in time and in tune with each other. This is particularly helpful when you are using its loop recording capability to capture loops on the fly. Devices inside a project can receive MIDI from other sources, and there’s Ableton Link available too for sync’ing with other compatible devices. Since your purchase gets you the iPad and iPhone versions at the same time, you can use Ableton Link to play both in sync without spending any extra money. 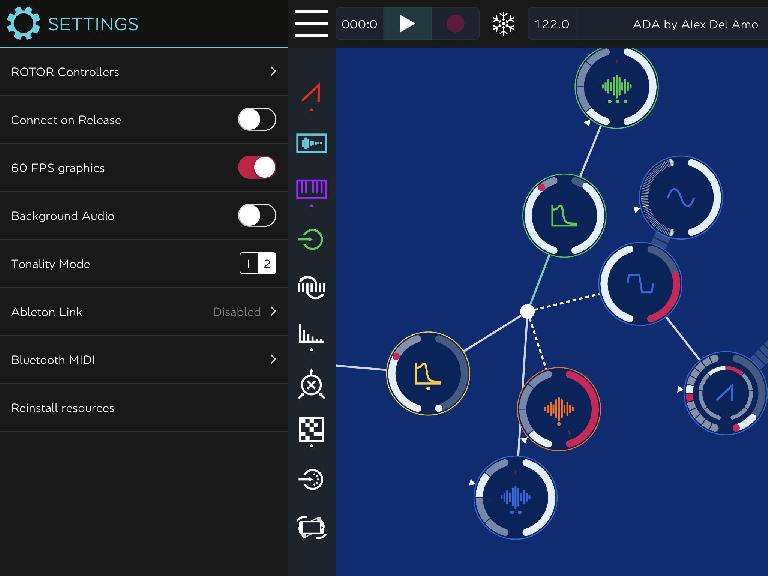 ROTOR is a very cool app that combines some of the most interesting elements of synths, sequencers and DAWs. Perfectly suited to the touch screen interface of iOS, it’s equally adept at letting you experiment and build patches, tweaking the settings and behaviours of modules as you go, and also helping you to perform live. Adding the two controllers (one per hand) transforms the live experience into a truly tactile one. Even if you don’t add those, it’s still a fun, interactive experience, albeit one that’s slightly less precise when performed with fingers. 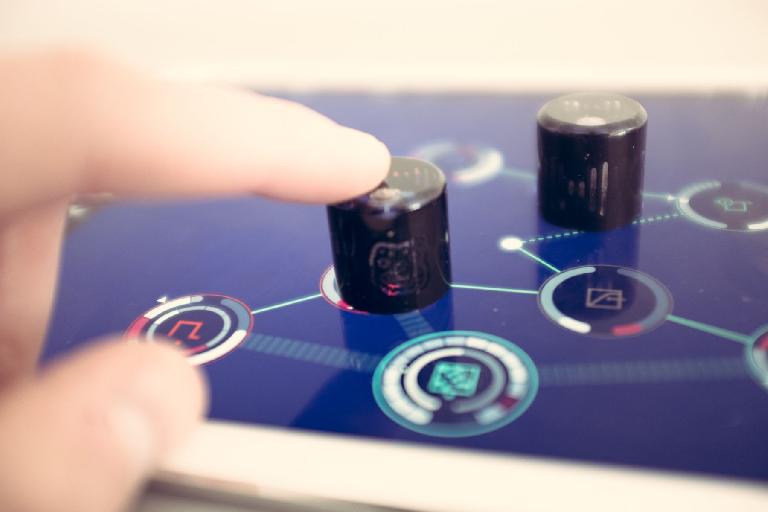 Some may find the limitation of being able to use only an instance each of the modules provided to be an issue, and it is slightly disappointing. However you can change these on the fly, loading new loops, changing synth waveforms and so on – and indeed this is kind of the whole point of the app – so there is more flexibility than may at first be obvious.

At $10 / £10, ROTOR is a bit of a bargian to be quite honest. With this depth of features and advanced design, not to mention the bundled loops, samples and the comprehensive I/O options, there’s plenty of fun to be had learning, experimenting and performing. It may at first look Reaktor-esque but it’s actually much more friendly than that, providing a truly innovative way to record, loop, and design sounds on your iPad or iPhone.

Cons: You can use any of the modules, but only one instance of each per project.