Firmware updates have greatly expanded the functionality of RÃ˜DE's podcast-focused mixing interface and recorder. Iain Anderson put it to work.

To take a serious look at this podcaster-focused mixer-recorder-interface, I’m going to give it my usual treatment: a five word review. The RØDECaster Pro is a device that’s versatile, voice-focused, tactile, self-contained and convenient. 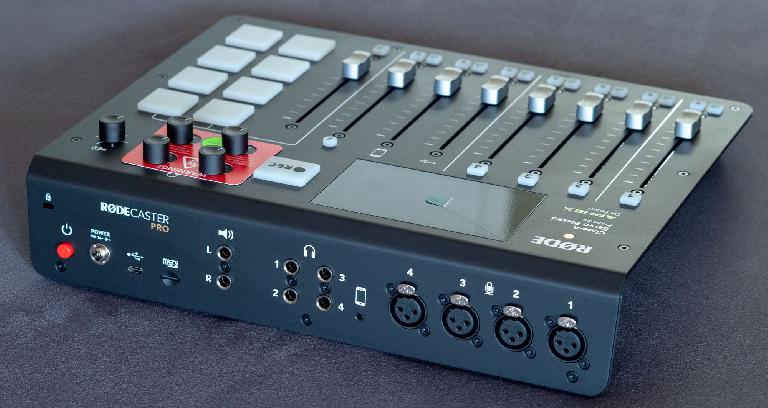 Fresh out of the box, this is what you’ll get on the back

Nothing impresses a client like giant colored buttons, sliders, knobs and a color touchscreen, but the details are often in the inputs and outputs available. The back has four XLR inputs for microphones (Servo-biased Class A preamps, all with support for 48V phantom power), a USB input/output for your computer, a minijack (TRRS) for a phone, and a screw-lockable power cord. There’s also a wireless Bluetooth input.

For output, there are two 1/4” L/R jacks and four separate labeled 1/4” headphone jacks, each with a separate volume knob. There’s also an unlabeled minijack at the front which can be controlled with the #1 volume knob. If you enable multichannel recording in Settings > Hardware > Advanced, then plug it into a computer, you can access every input on its own. Including the overall mix and some separated stereo pairs, that’s 14 different inputs, a big improvement over the lone stereo mix of v 1.0. 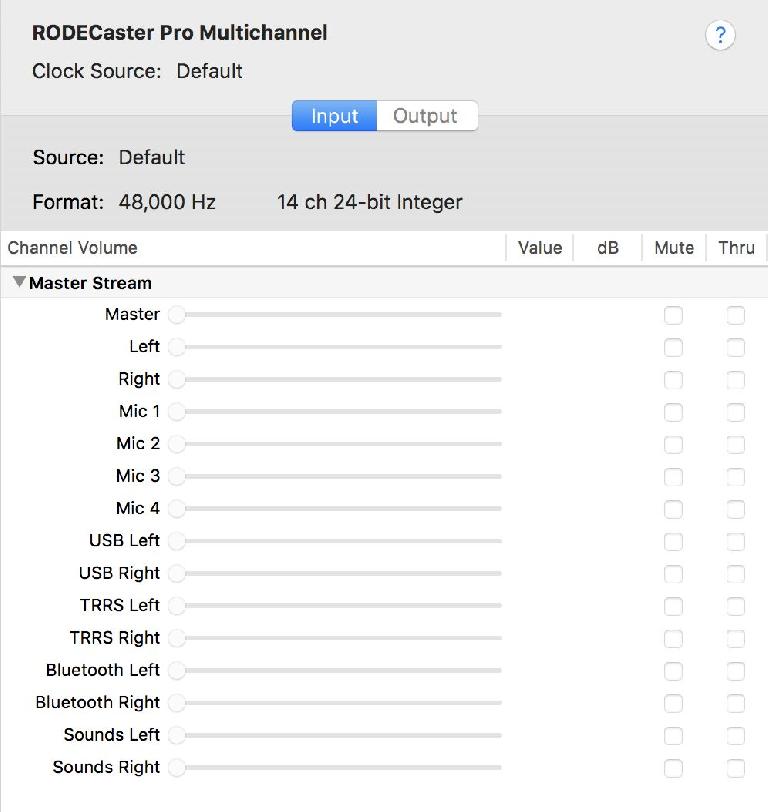 Plug in, and you can get hold of all those channels in Logic

For testing, I used a RØDE PODMIC on one XLR input, and my trusty RØDE NTG-3 (the same one I use to record my video courses) on another. I also tested audio from an iPhone XR via a Lightning adapter with a minijack-minijack cable, and my iPad over Bluetooth. In terms of quality, the minijack cable and the Bluetooth both sound fine: using Garageband on an iPad over Bluetooth for background music is perfectly OK. The XLR inputs also sound clean, with a comparable (low) noise floor to my Scarlett Solo or Zoom H5. While the new PodMic is a solid option (especially for the price) the NTG-3 is a rich delight.

Because there’s no minijack mic input, you won’t be able to plug in a headset or lapel mic, but that’s not what this box is designed for — it’s made for bigger, pro-level XLR mics, and if you really want to use a smaller mic, you’ll need to amp it through a phone or a computer to bring it in. 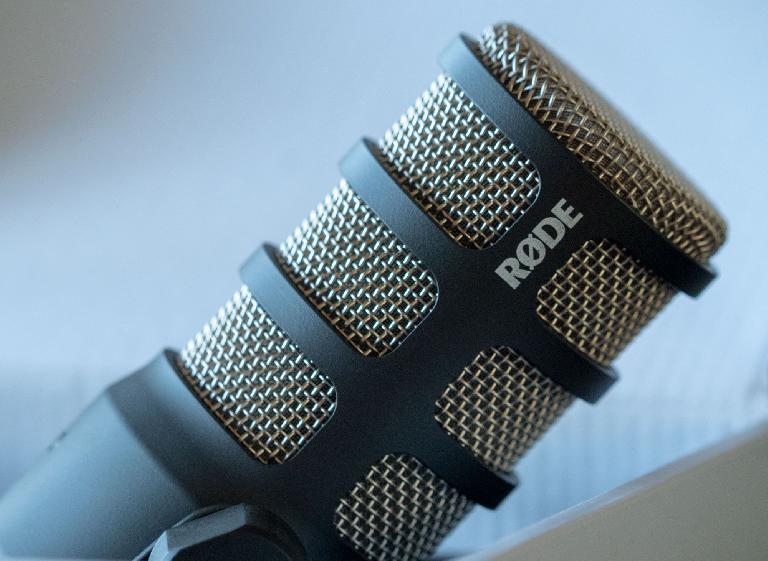 The new RØDE PodMic is clean, simple, and sounds good

There are a lot of settings to come to grips with when you’re setting up the microphones, and they can be tweaked in subtle and not-so-subtle ways. Besides the obvious sliders to control volume, there’s a second set of audio level controls for the XLR mics. You start by choosing one of several RØDE microphone presets (or just a generic Condenser or Dynamic microphone) then tweak the levels with plus/minus buttons on the touchscreen. These set a base level which the physical sliders then further adjust, and you’ll want to make sure that the levels of all inputs are fairly even before you start messing with the sliders.

Advanced controls are easy to find in the menu — just tap the color-coded hardware buttons to get straight to the controls. In Advanced, you can apply Compressor, De-esser, High-pass and Noise Gate filters to that specific microphone and for Mic 1 only, Ducking. Mix-minus is automatically included, so remote speakers shouldn’t have any issue with feedback loops, and it’s optional for the USB channel now too.

Each input can also make use of the Aural Exciter and Big Bottom filters from Aphex, and they’re worth a listen. The Big Bottom filter certainly adds some low-end depth if you’re looking for that radio (or “in a world” movie trailer) sound, though I don’t know if I’ll keep the Audio Exciter on myself.

Settings can only be tweaked indirectly, by setting each mic for a Deep/Medium/High tone, and for a Soft/Medium/Strong strength level. Still, the defaults are in a good place, and if you’re an audio engineer, you likely want to deal with all this yourself in post production anyway. One last limitation to be aware is that there are no inputs for musical instruments; this device is all about speech. 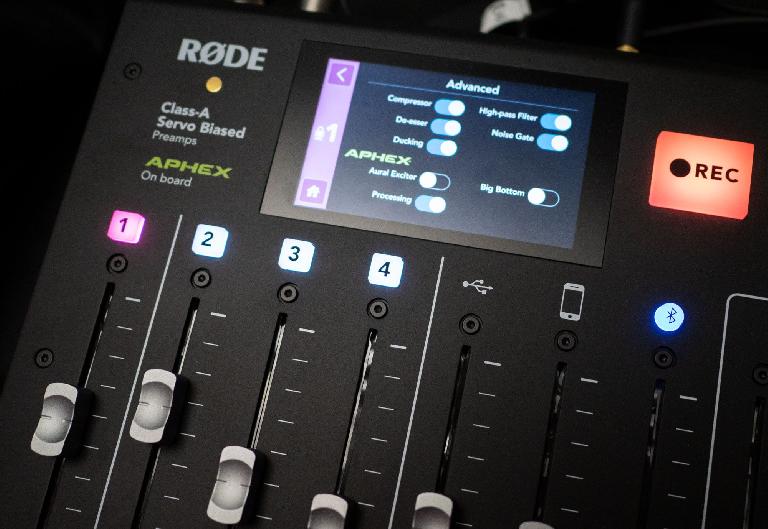 On top, you’ll find eight sliders, eight sound pads, a big record button, eight solos, seven mutes (no mute for the sound pads) and five volume knobs. The volume knobs are clicky and feel tight. The pads and buttons have a good feel and give the right feedback when you push them. The sliders feel just a little less solid, a little more plastic, and with a little side to side play in them. The only button on the back is the power button, and the device will confirm the shutdown before actually turning off, a nice touch. The touchscreen itself, while mostly used for setup, can also be used during recording to add markers. (These markers are readable in some apps but not all — yes in Audition and iZotope RX Audio Editor, no in Audacity and Logic.)

The sound pads come pre-loaded with a selection of effects (applause, rim shot, wah-wah-waaaah, etc.) but you’ll want to load up your own sounds here. Using a computer and a simple provided app, you can drag and drop new sounds in, one at a time. Alternatively, you can record directly into the device — for example, to pre-record a short interview — but you can’t trim recordings made in this way. There are three options for playback, but Latch is the most flexible as it allows you to stop and then restart a sound.

Lastly, tinkerers should note that this is not a MIDI device, so unless there’s an update, you won’t be able to repurpose it as a mixing console or color correction controller. 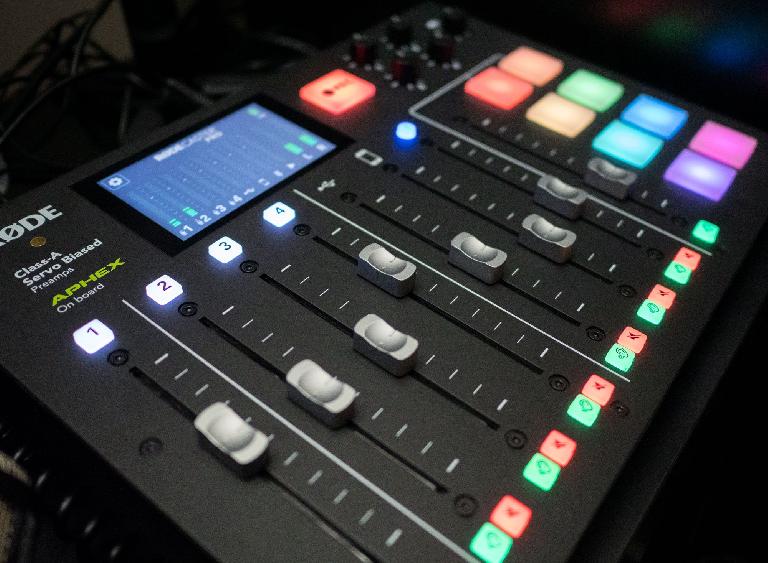 So many sliders, so many buttons

The RØDECaster Pro’s great strength is that it’s a standalone unit. Without even being connected to a computer, you can hit record, start talking, control levels, add sound effects, and end up with a single finished stereo file that’s ready to upload. And while that’s all you could do with the device as it originally shipped, the February 2019 firmware update added the much requested ability to record multiple channels at once — if you’re happy to plug it into a computer. Now, if you’re willing to do a little post production, you can mute a speaker who coughs while someone else talks.

If you’re happy to simply record a finished stereo file, your computer could instead serve as an audio source, a live streaming device, or nothing at all. In a world where so many tasks are moving to a multi-functional computer in your pocket, there’s something very welcome about a dedicated hardware box that does one thing, and does it well. 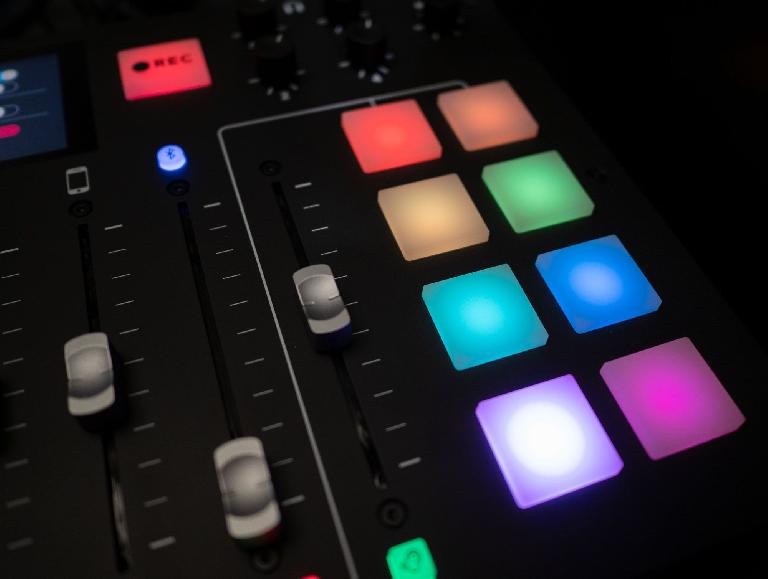 Because every podcast needs a sting, a “wah-wah-waaah”, and a “ba-dum-tish”

Out of the box, the experience here is far simpler than any previous podcasting workflow. Instead of needing a dedicated app to play back stings and bumpers (or adding them in post production) you can load them into the box itself and just play them live, just like a radio DJ. That makes life easy for the host, and puts any guest speakers at their ease.

What if it’s just you, and you don’t often have guest speakers? While inputs 2-4 might go unused by a solo podcaster, there’s still value in the box from the sound pads, the self-contained recording feature, and the audio processing. If you’re not sure what Compression is or what a Noise Gate does, you can get their benefits by just flicking them on. The user interface is direct, and every setting is, at most, just a couple of taps away.

For most users, the RØDECaster Pro neatly hits that balance between power and ease of use, and lets you focus on your content without getting lost in the technical details. While it’s true that it would be nice to tweak a few more settings on-device, such as being able to pan each XLR mic to a new stereo position, that’s easy enough to fix in post. 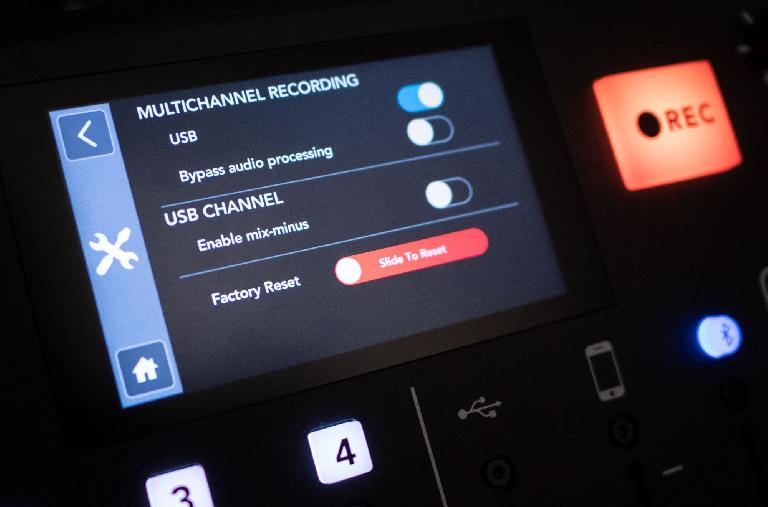 Record stereo to an SD card, and 14 inputs to a computer

So is it a winner? Yes. This device was designed for podcasters, but I can see a clear use case for  anyone who conducts multi-person interviews through audio or video. The speaker outputs mean that it would work for a live event too; I wouldn’t be surprised to see one of these backstage at a panel discussion, or at a community radio station.

In the short time since its release, it’s improved significantly. When originally released last year, this multi-input device could only record in stereo, but it can now record to 14 separate channels. That should expand its target market significantly: control over individual mics in post-production is important to many technically-minded users.

Even if you’re using it alone for recording voiceovers, or as an audio interface for studio-based YouTube recordings, the voice enhancement effects give you a simple path to clean, professional audio. Add in the audio pads, physical sliders, extensive inputs and outputs and easily accessible controls, and it’ll suit a lot of people. For what you get — especially if you value ease of use — it’s worth the price.