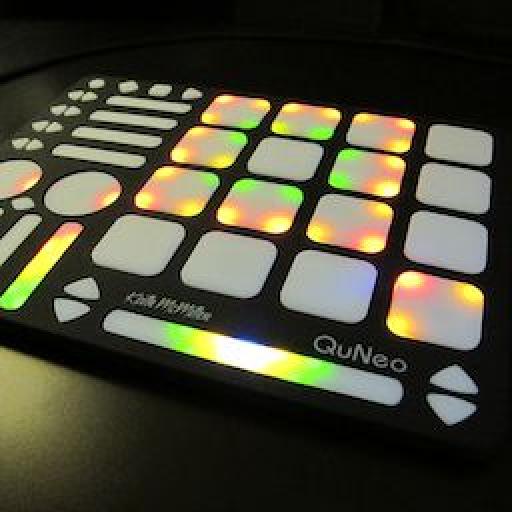 Language
There are a number of innovative MIDI controllers coming through: Ableton Push & ROLI's Seaboard to name a few. Darren Burgos reviews another unusual one. Find out if the QuNeo pushes his buttons.

The QuNeo isn't your ordinary MIDI controller. It has drum pads like some other controllers out there, but QuNeo goes much farther by not only giving you velocity sensitive “sensors” (QuNeo's term for the various pads, sliders, buttons, and rotaries), but pressure and position too. It can sense what “Location” you've pressed/touched, the quadrant you've hit on a single drum pad, wether you've slid your finger up/down/left/right on a pad, and even how hard you press after the initial contact. In addition to its “3D multi-touch” capabilities, QuNeo has multi-colored LEDs under each sensor that express visual feedback. For example on the horizontal and vertical sliders the color green represents a low value being sent from the sensor, yellow is medium, and red represents a high value. They also look great for performing live! Although it's pretty obvious QuNeo was built by Keith McMillan instruments to control drum modules, DJs, Lighting engineers, keyboardists, and producers alike can all take control in countless different ways. 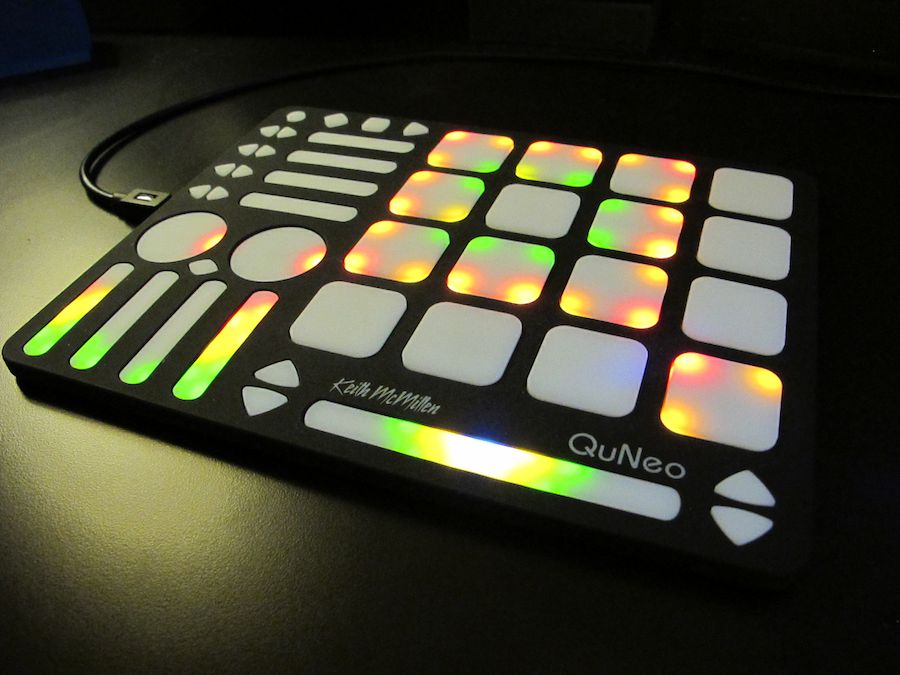 First thing you'll want to do, is download the QuNeo Editor software from the Keith McMillan site. The software is one of the most robust editors I've ever seen for any MIDI controller on the market today. With the software, you can edit the individual sensors, update the firmware on the unit itself, and so much more. 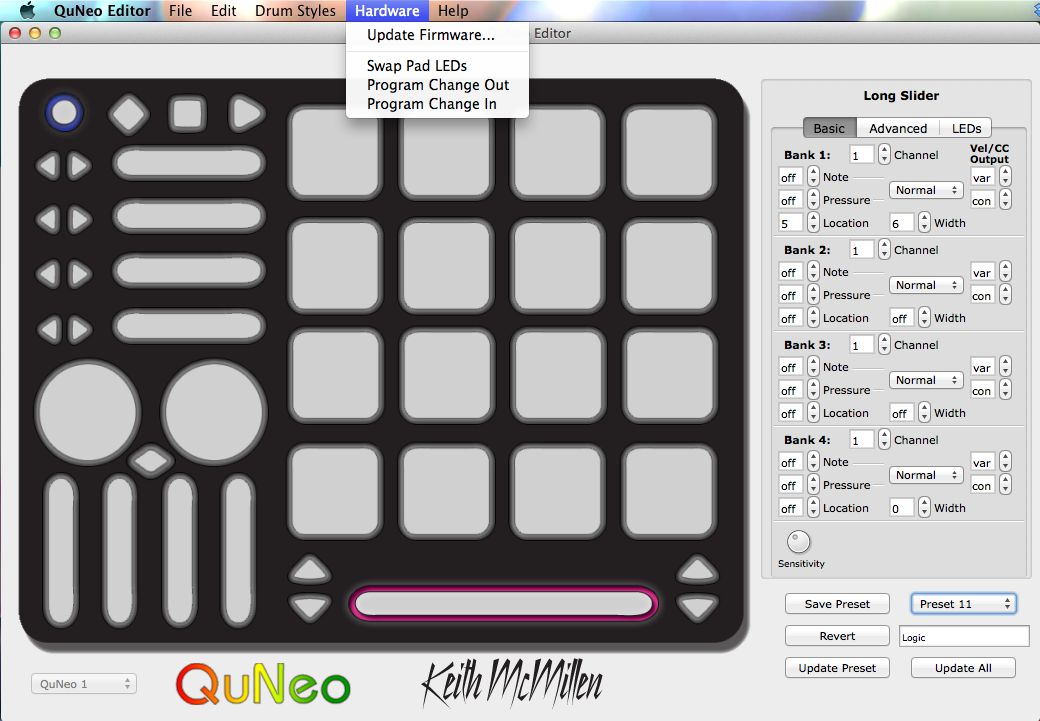 When installing, you also have the option of adding “components” for the various applications you use. These aren't the factory presets within the unit itself, they're projects you can open that match QuNeo's built-in templates for instant satisfaction. These are convenient if you're starting a song from scratch, but not so much if you'll be using QuNeo in an existing song. Luckily, most DAWs today like Ableton Live and Logic Pro allow you to quickly and easily assign MIDI controllers to most any function within the application. 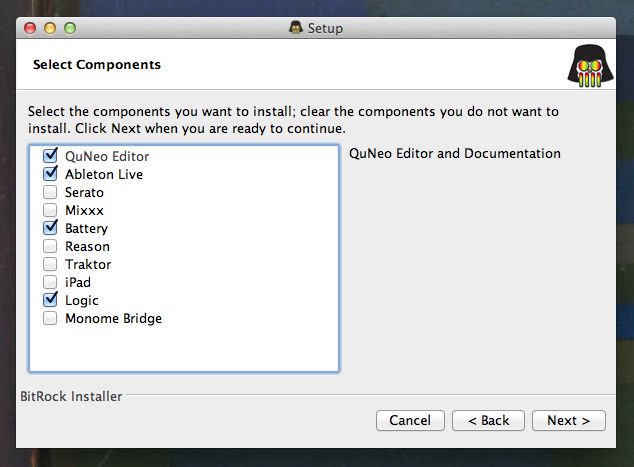 On a side note, if you're a Logic user, be careful if you've mapped another controller extensively within Logic's Controller Assignments... Installing QuNeo's Logic component will write over your existing assignments. Back them up! If you've never mapped a controller, or map on the fly as you produce (like me), you don't have to worry about this.

There are a total of 16 built-in preset templates for various applications like Ableton Live, Logic, Serato, and Battery. In Ableton Live for example, QuNeo can be used as a highly capable clip launcher for hands-on live arrangements. In Logic Pro, (along with the included Logic project) it can be used as a convenient way to use Ultrabeat's pattern mode. If you don't use all of these applications, any/all of the presets can be written over. In my opinion, the real power of QuNeo comes from the nearly unlimited customizations you can make within the editor software, all of which can be saved to any of the 16 preset slots. For example you could save a preset so the 4 vertical sliders are assigned to your synth or drum module's Attack, Decay, Sustain, and Release envelope parameters. You could, set the drum pads to only trigger notes within the musical scale of your song, and the Y access to open and close modulation assigned to an LFO, that way QuNeo can be used to control a virtual synth. The sky's the limit... nearly any combination you can think of can be achieved by using the QuNeo Editor software.

Keep in mind that unless QuNeo is being used as an OSC-based controller (currently only available for Ableton Live), like most standard MIDI controllers, it can't receive info back from your DAW regarding virtual parameter positions. If you adjust the same parameter in your DAW after you've assigned it to QuNeo, it won't update the LEDs. As soon as you readjust from QuNeo, it will match up again.

The top left button of QuNeo is called the Mode Button. It allows you to choose from the 16 presets by pressing it first, then on the corresponding pad. The bottom left pad is preset 1, on up to preset 16 on the top right pad.

If you hold down the Mode Button for one second, it puts QuNeo into “CoMA Mode.” This allows you to easily trigger a specific controller assigned to a sensor, to your DAW while it's in MIDI learn mode. The drum pads for example can send 4 different types of MIDI control. While in CoMA mode, the pads send the 4 types of data only from the different corners of the pad. Say for example you'd like to assign the Y access on a pad to the filter cut off on a single voice of your drum module... while in CoMA mode you simply press the bottom right corner of the pad. The manual shows the location of where specifically each control on a sensor is sent from in CoMA mode.

There are a total of 10 different types of sensors. The Drum Pads for example can be set to either Drum or Grid Mode. In Drum Mode, they can be used to send Note data, velocity, horizontal and vertical touch (X/Y), and pressure. In Grid Mode, each individual pad can send 4 different MIDI notes. You set these in the QuNeo Editor via the 4 cardinal point parameters (NW, NE, SW, SE). Grid Mode also sends velocity, and pressure, but not the X/Y touch control data. The vertical and horizontal sliders can send a MIDI Note, velocity, and allow you to assign a MIDI CC number to Pressure and Location. The round “rotary” sensors can send Note, Velocity, Pressure, and Location. You can also use them as an incremental “knob” so to speak. This mode is called Direction. When you move your finger clockwise or counterclockwise around the sensor, it sends either a 1 or 127 value. The speed at which you move your finger determines how fast the values are sent, and of course, the speed itself can also be adjusted. The Long Slider below the drums pads can send Note, Velocity, Pressure, and Location. This can also have a “width” setting that allows you to use two fingers to simultaneously adjust two different CC# values. There's also a trio of transport buttons for assigning to your DAW's Record, Stop, and Play functions. 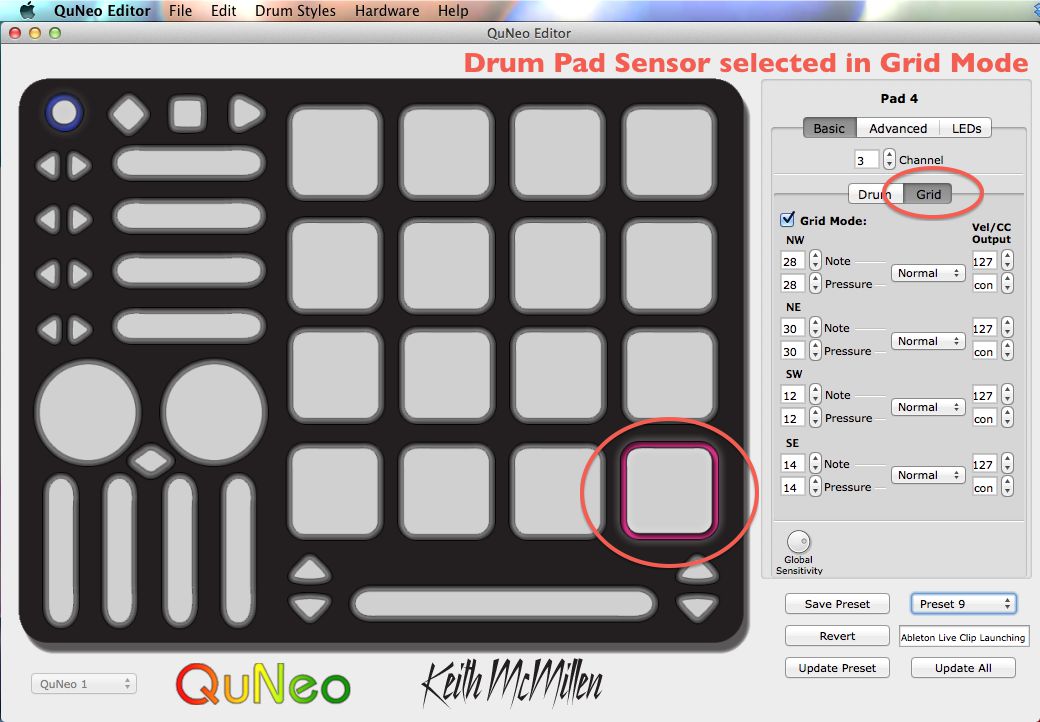 The small triangular (and the one diamond shaped) button(s) next to many of QuNeo's sensors, can be used to send much the same data as the standard sensors above. Their main duty though, is for changing banks. These buttons are called Up/Down, Left/Right and Rhombus. Most of QuNeo's main sensors can be switched between 4 different “banks”, and all three of these button types can be assigned to do the actual switching. Switching banks basically gives you 4 completely independent settings per sensor. When using the pads to trigger UltraBeat sounds for example, you can assign the bottom left Up/Down buttons to move the pads to bank two. This way you can easily access the next set of sounds above the first 16. The buttons even graphically shows you the band has been changed by lighting up. 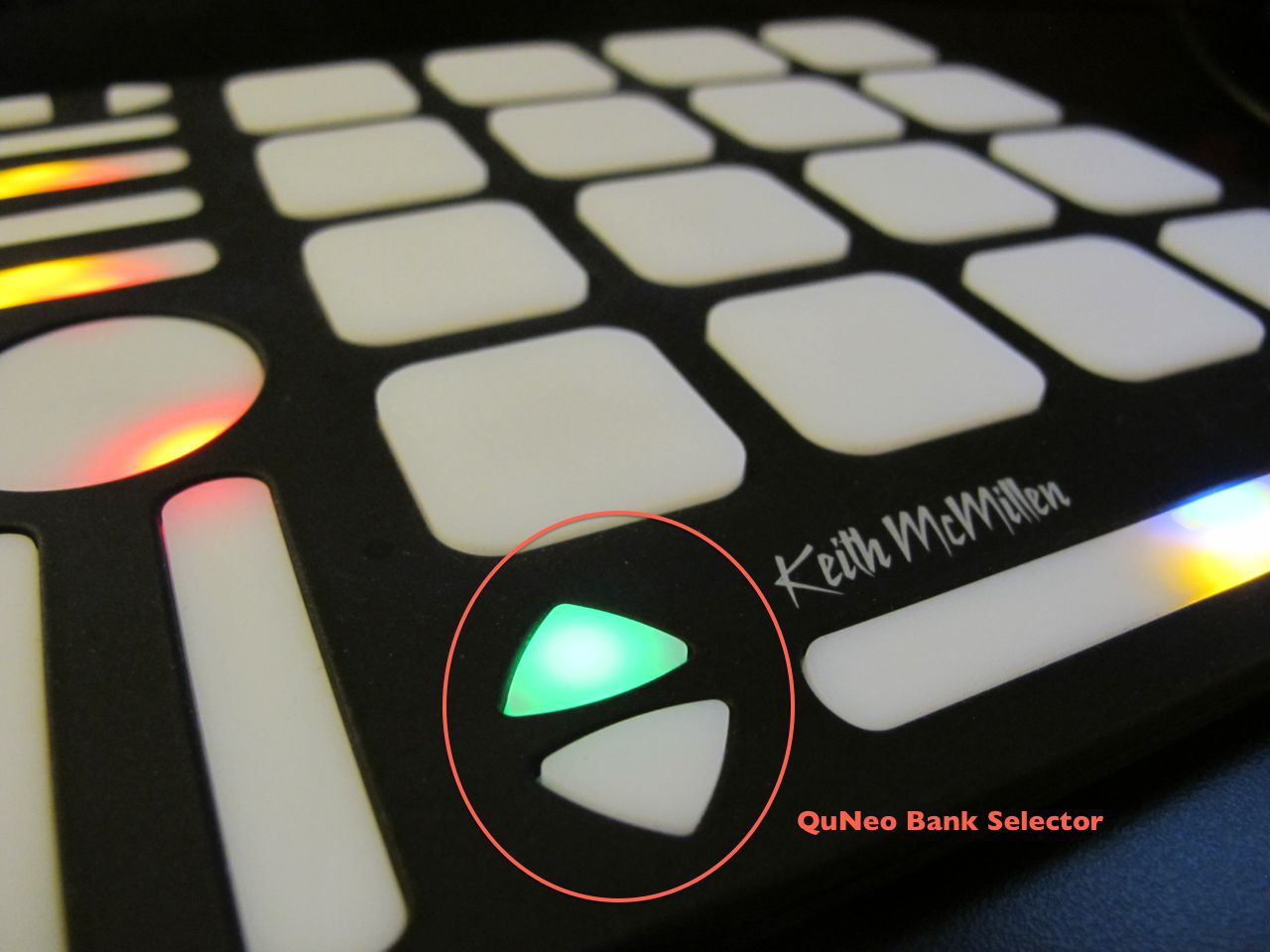 I have several MIDI drum, keyboard and control surfaces from various companies, but most of them are collecting dust. QuNeo is the one MIDI controller I actually find myself using. It's light, and small (about the size of an iPad), so I can easily take it with me anywhere. It's incredibly cool looking, and it has depth like no other unit out there. There are a few things that could be fixed. The Long Slider to me seems perfect for a pitch bend controller, but it can't yet be assigned for it. The rotary sensors send their first value at the top making it less convenient for controlling virtual instrument parameters with knobs that start at the 7 o'clock position. And the last thing, which is probably a good thing for all the MIDI geeks out there, is that the editor software might be slightly too deep for some. All of these things can easily be addressed with future editor software and firmware updates though, so don't let them distract you, try it out, you'll love this thing.