Adding randomization to the modulation of your CV signal is a great way to introduce all kinds of unexpected and pleasing new effects. Chance from Qu-Bit is a module that lets you do just that.

What is Chance? Chance is a modulation source that creates musical voltages with a digitally generated coin toss. Every time the clock pulses the coin gets tossed, generating random values for infinite modulation combinations. This method of randomization was inspired by John Cage’s use of Chinese divination text; Qu-bit has taken these ideas and packaged them into and attractive 14HP module. Not only does randomization occur on Chance at each coin toss, but there is a designated coin toss button that allows us to manually choose a new value before the clock pulses again. This type of modulation is great for improvisation and spontaneous harmonic voltages, but there’s much more to this module. 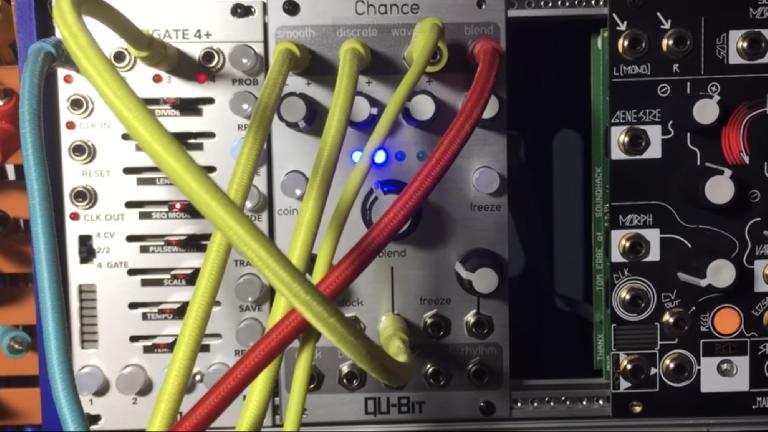 On the top of unit, we have our four Distinct Algorithms, each with their own corresponding Attenuverters:

Smooth: Discharges constant random voltages in response to the rate being received as well as its destination.

Discrete: Produces a differently fixed voltage when the coin gets tossed, which can occur both naturally or by pressing the Coin Toss button.

Wavetable: Emits a nonstop changing tempo-synced LFO fluctuating between division and multiplication at each clock pulse.

Blend: Creates a smooth transition between all algorithms, which has no relation to the voltage currently present of each output.

As I mentioned before, Chance has a “Coin Toss” button that when pressed sends new values to each of the algorithms. Opposite of that is the Freeze button, which freezes all voltages for each algorithm and changes a great many behaviors of each output. The Rate knob controls our internal clock, the speed at which the Smooth Algorithm fluctuates, and gate signals of the Burst Output. The Rhythm Knob sets the chance of random values through Rhythmic Divisions and Multiplications. The Blend Knob switches between the four Algorithms that are produced from the Blend Output.

To the far bottom left is our Rate CV Input, next to that we have our external Clock Input, Blend CV Input, Gate Input for Freeze, and CV Input for Rhythm.  On the gray area at the bottom of the module we have an Output for External Clock, the Burst Output which tosses the coin at every clock pulse or by pressing the coin toss button generating random parameters each time. We also have the nice addition of White noise, which is gentle and soothing, and Digital noise, which is harsh and unforgiving. The Rhythm Output arranges the probability of our values at every clock pulse or multiple of clock pulses when divisions occur.

Chance is perfect for anyone trying to get more out of their already existing modules. Distinct Attenuverters for each algorithm give you even more control over how each Outputs interacts with whatever is receiving. Without modulation, melodies can be lifeless and repetitive. Chance changes all of that by molding randomness into each clock pulse, creating a different set of values to be sent to your modules resulting in infinite combinations of unpredictability.

Cons: Changes are sometimes not very noticeable. Knobs are a bit stiff.

Learn more about synthesis in the Ask.Audio Academy here: https://ask.audio/academy?nleloc=category/audio/topic/synthesis