Is it a bird? Is it a plane? No, it's Reason 9.5 with full support for VST instruments and effects. Yes, you read that right. So what's going on? Hollin Jones finds out...

When Reason debuted way back in 2000, it set itself apart from other DAWs by virtue of what it didn’t do as much as what it did do. It was MIDI only, didn’t track audio and didn’t support plug-ins. You could connect it to other DAWs using ReWire, which Propellerhead invented, but otherwise it was pretty much self contained. You’d think that might have counted against it but in fact the stability and ease of use this approach ensured at a time when “bigger” DAWs and software generally was still plagued with crashes and lockups meant Reason established itself very quickly and remained popular.

Times do of course change. First to go was the audio issue, when Reason was merged with Record and gained audio tracking, later expanded with time stretching and more. A far more advanced mixer was introduced. Then, Rack Extensions were invented: instruments and effects designed in accordance with a special SDK that opened up Reason to third party models, as long as they were approved. Now in version 9.5 the previously unthinkable has happened, and Reason has gained support for VST plug-ins. There are a few caveats, but on the whole this has been done as you’d expect from the Props. It’s clean, straightforward and it works. Before we get into the details however, a quick recap. 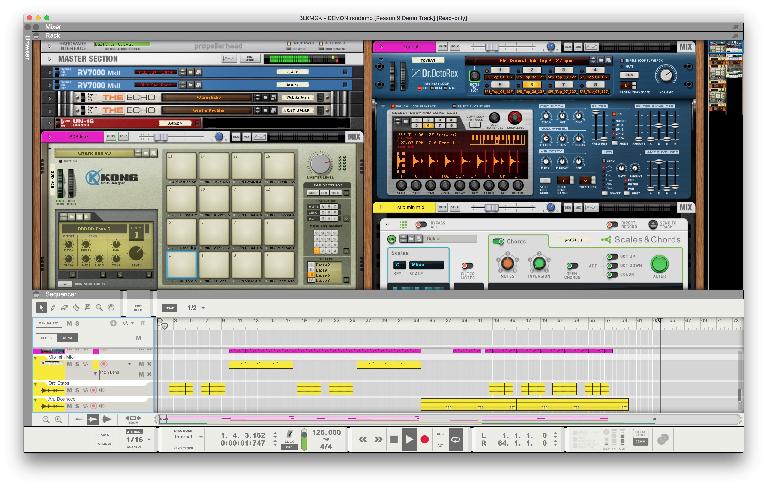 One important thing to understand is that VST support is pretty much the only user-facing change in version 9.5. That’s not to diminish the amount of work it must surely have taken to do it, but the Props have chosen – wisely – to put all their effort into making VST support work properly rather than also trying to add a bunch of new features at the same time. So everything that we liked about Reason 9 is still here and I won’t rehash all those points. You can read our review of Reason 9 here. The upgrade is free for existing users, so you really can’t complain.

And so to the new stuff. When you first run this updated version of Reason it scans your VST folders and warns about any potentially incompatible plugs that it finds. The implementation is based on the VST 2.4 standard, which encompasses the vast majority of plugs out there. Even if you have VST3 versions of some plugs, they will almost certainly have a 2.4 version as well. AU on the Mac isn’t supported but again, the vast majority of AU plugs will have a VST version. The Preferences’ Advanced tab gets a new area where you can see your system’s plug-in folders and also add custom folders if you like. In the Window menu is the option to open a Manage Plugins window from where you can manually disable or enable any plugins – handy if any are unstable or out of date. 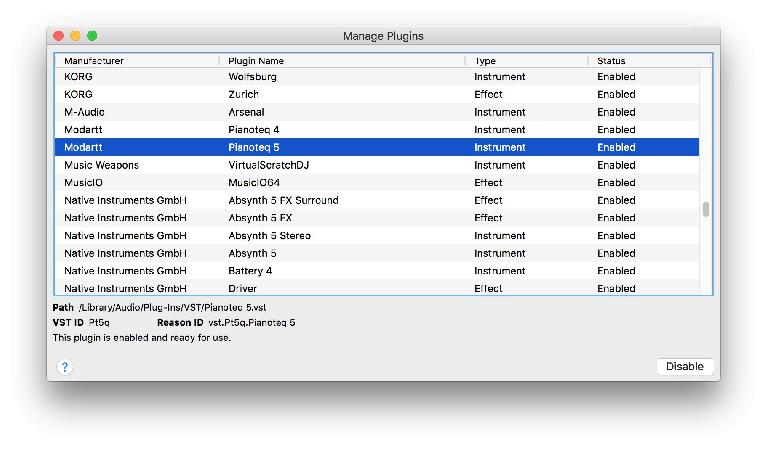 VST instruments and effects appear in the Browser in their respective tabs, below the Props’ own models. They are grouped by manufacturer and shown with generic icons but you can screen grab any plug-in using the Screenshot button on its GUI window once opened. This stores a grab of the interface in the Browser, meaning you can navigate more easily by sight. You don’t have to do this for all your plugs, just the ones you want to identify with a glance. Instruments are loaded by dragging into the browser or double clicking, just like any RE or native device. They live in a new VST Instrument module which behaves like a simplified Combinator front panel with pitch and mod wheels, module presets and a CV assignment section with 8 slots – more on this later. 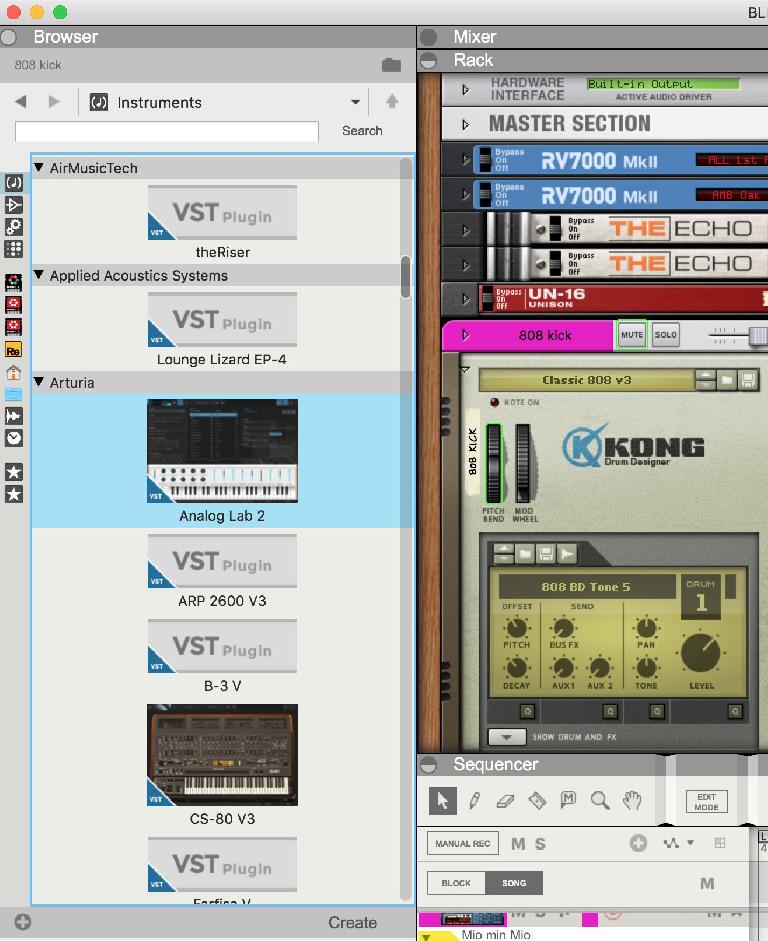 VST plugs shown in the Browser

A World Of Plug-Ins

Double clicking opens the instrument or effect’s own interface, just like in any other DAW and they are useable just as they would be in any other situation. The container window has some common toolbar buttons. “Keep open” ensures the VST window doesn’t disappear when you click away, Automate and Remote allow for automation and remote control assignment as found in Reason’s own modules, and Screenshot as mentioned places a grab into the Browser. VST instruments behave basically like native modules but although their onscreen keys and pads will trigger sound, this isn’t sent to the sequencer. I don’t imagine anyone really records that way though. 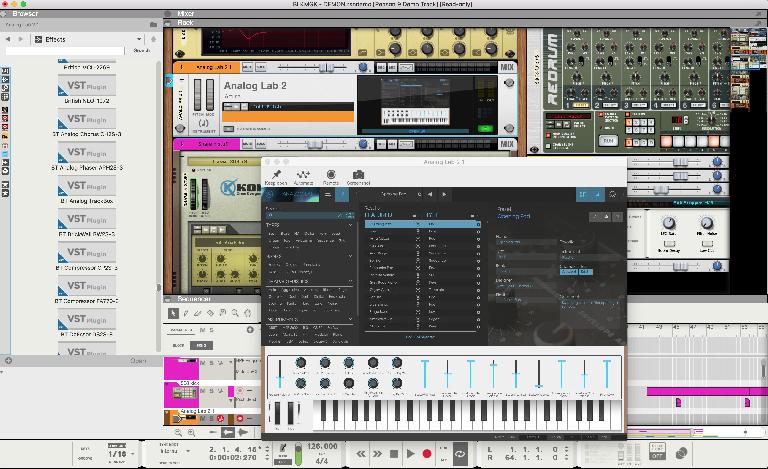 A VST running in Reason!

So you can play all your VST instruments inside Reason, use Player devices to trigger them, automate them and use Remote to assign MIDI controls to them. VST effects can be dragged and dropped just like Reason’s own effects and behave as you’d expect. Where a plug uses the fxb / fxp preset bank format, you can access these from the rack module. Where they don’t (and many of mine didn’t), you generally have to open the UI or alias the presets folder to the Browser.

Where things get really interesting however is when you start to take advantage of Reason’s modular and CV talents. For a start, you can freely patch audio with VSTs just like with any other modules, so you can split, process and mangle signal to get creative. Just spin the Rack around to access the rear panel and access up to 8 audio ins and 16 audio outs per module. Plugin Delay Compensation is also now available and can be turned on or off from the Transport panel – it’s on by default. 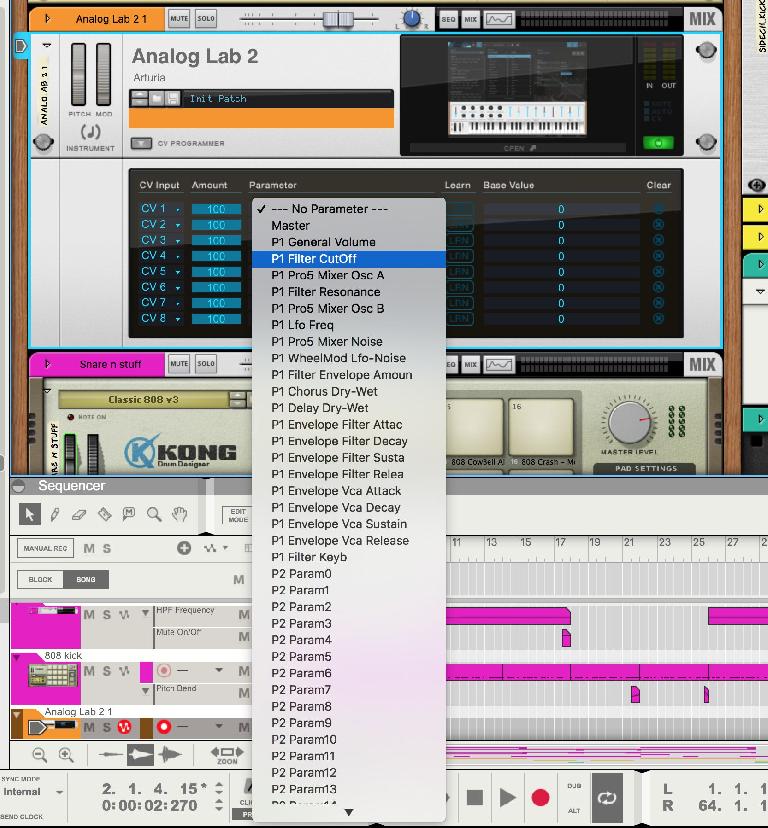 You also get note and gate CV sequencer control plus 8 modulation CV inputs for every VST Rack module, which you can find by expanding the programmer section. On the front is a matrix for assigning CV inputs to parameters which vary by plug-in. All of a plug’s parameters that are available for CV control will appear in these dropdown menus so for a big synth the list will be long, and for a simple overdrive it will be shorter. You can use a Learn control for each slot too, so by moving a parameter on a plug you will instantly assign it – handy for big, complex instruments.

The implications of all this are pretty cool. Reason’s CV patching system and specialsed modules – mergers, splitters, sequencers, arpeggiators – means suddenly all the excellent stuff you could do with Rack Extensions and Reason’s own modules is also available for VSTs. Third party plugs can also now be included in Combinators. All the creative control you are used to (and Reason’s patching system remains one of the best in the business) now automatically works with your whole plug-in collection. 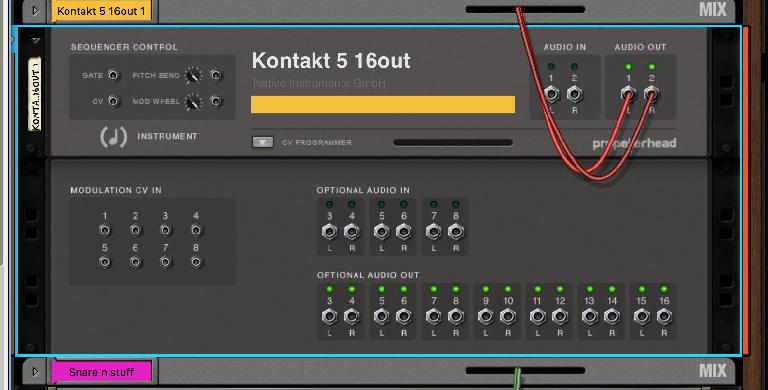 Are there limitations? A few, but no deal breakers. VST MIDI effects aren’t supported yet, VSTs can’t be used while in ReWire mode and multitimbral instruments aren’t supported, meaning you can’t send more than one MIDI channel to a single instrument – although you can of course just load more than one instance of it. When you load a multi-output VST like Kontakt’s 16-out version, only one mixer channels is created by default rather than 16, so you have to manually create and route these though this is done to prevent mixer clutter, since few patches would use all 16 of those channels. In my tests, VST support didn’t introduce any stability issues. Of course the Props despite all their testing (7000 VSTs so far) can’t account for every plug out there, so there is some crash protection built in.

For existing Reason 9 users this update is free so it’s a no-brainer. For new users, Reason is now even more of a compelling proposition. No, it doesn’t have the insane depth of features of Cubase Pro or Logic Pro, but honestly it’s friendlier to pick up and start using and these days has a rich set of tools that are more than adequate for a great many producers. The patching system is also more or less unique in that it works across every part of the software, not just inside a few synths. 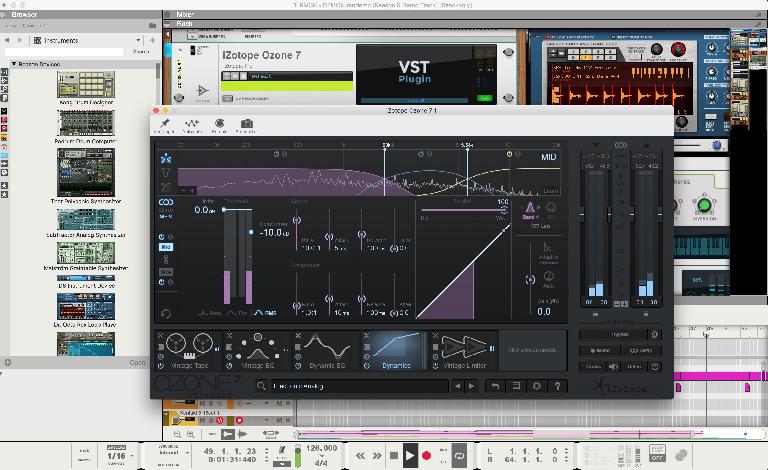 Mastering with Ozone inside Reason

By introducing VST support and crucially making it work properly, your reliance on Reason’s own instruments and even on Rack Extensions is greatly reduced, as is your need to connect to another DAW for processing. Now you can strap Ozone across your master buss, or load Waves GTR plugs to process your sounds. I’d expect to see Reason 10 build on this – features like notation and video support have been on my wish list for a very long time – but in the meantime, Reason remains an excellent DAW for people working in all kinds of music production.

Pros: Open up your system with support for VST instruments and effects inside Reason. Implementation is nicely handled, VSTs behave just like other Rack units. Patching audio and CV with VSTs opens up massive new creative possibilities. All the cool stuff from Reason 9 is still here. Still very stable and friendly to use. Less need to use ReWire now.

Cons: Accessing VST presets can be fiddly when a plug doesn’t use fxb / fxp banks. Can’t yet send more than one MIDI channel to an instrument. Some manual patching required with multi-output instruments. No AU support – at least not yet.

Learn more about Reason in the Ask Audio Academy here.