Language
The Reason platform from Propellerhead continues to be popular amongst music makers, performers and sound designers. GW Childs finds out what's new in Reason 9 that'll convince you to try it out.

Reason, the platform that convinced many of us, years ago, that we no longer needed hardware, is back with version 9. But after a few lackluster releases over the last couple of years, is it worth your time? In this review, I endeavor to answer those questions, as I cover one of the coolest Reason releases in a long, long time.

Back In The Rack Again

Like many, I have stepped back a little from Reason over the last couple of years. I still use it, like an old trusty synth that never lets you down. But like most consumers, when you splash some new colors on something familiar, you can’t help but be a little excited. This was definitely my reaction the first time I changed Reason’s ‘skin’ color to a hue that was a little darker, and more adult. 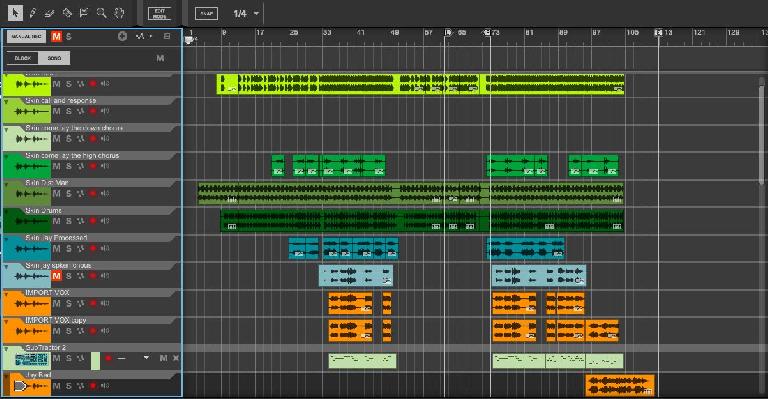 Adult is actually a word, I think, describes Reason 9. Since Reason 6, I feel like we’ve been seeing an awkward rise through the teenage years. Each release giving us little signs of adulthood—Like a more practical, and useful work environment, a new browser, a method for pattern-based sequencing, and Rack Extensions. The latter being a game changer, as it finally allowed us to see third-party names in the Reason rack.

Reason 9 is one of the first releases in a while that really goes beyond updating infrastructure, for the most part, and begins adding true, new features that don’t just emulate other platforms, but add something to them, in true Propellerhead fashion.

I began my foray back into the virtual world of Reason with a few stems of a track I’d been working on, in another app. Just basics like vocals, a bass synth, and some drums. I thought it would be fun to check it out with a real project. My first stop in the isle of new features was the new pitch correction feature. And, let me tell you at the start... This ‘little’ feature was like a big hug, saying “Welcome home”.

I use Melodyne a lot, and love its power, and I’m not saying Reason 9 excels past the reigning pitch powerhouse... but I will say it made me forget about it for more than a moment! Granted, Reason does not have the ability to polyphonically interact with chords, like Melodyne, but it sure does come close. And the way it deals with monophonic is fine enough, anyway. Pitch correction was a huge addition for me, as I wind up with several instances of Melodyne, usually within a session. Having pitch features organically reside in my session without having to pull additional resources from my CPU—Big thumbs up! 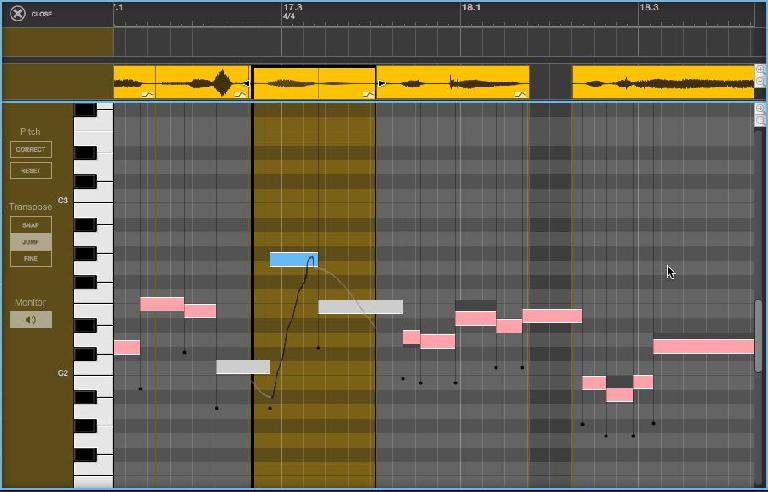 When you match the pitch correction features with the new ‘Bounce in place’ feature of Reason, you really do begin to, strangely, start feeling old school again. You realize that it’s really easy to create complex harmonies, and then bounce them down to audio as a single stereo file, freeing up resources, and still sounding just as awesome. 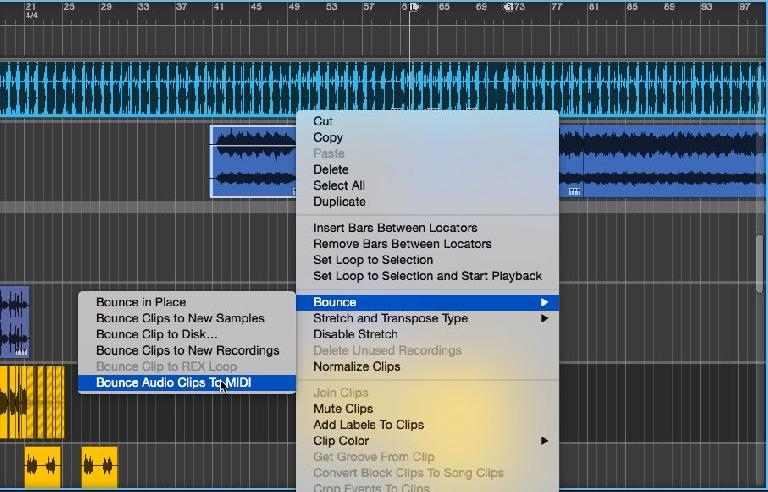 While I’ve only used the pitch correction, the ‘right’ way, I have not forgotten, and will not hesitate to remind you that misusing pitch features as a practice has produced many major sound effects, and character voices (Battledroids in Prequels, anyone?) in movies, video games, and even music. I’m very curious to hear how Reason adds to this rich history of audio voodoo.

The new Audio to MIDI feature is way more helpful than I thought it was going to be. It does not work with polyphonic tracks, but if you physically drop an audio file of a bass line or a vocal melody onto an instrument track, or if you right-click and select ‘Bounce Audio Clip to MIDI’, doing either of these particular rituals causes Reason to give you a very accurate MIDI recital of your audio file. And, it actually makes the MIDI pattern, and the obligatory Subtractor that comes with a MIDI conversion, into your audio track. This is sooooo helpful, as it keeps you from collecting a myriad of additional audio tracks to deal with later. Instead, every track just grows within itself. Reason 9 just reclaimed Reason’s throne as my main remix tool!

Especially considering that because you can now reverse audio in place, as well, I am now creating vocal lines with reversed audio. Just reverse the audio, and start pitching your vocalists work into new, and exciting free form singing sessions. So much fun! Reason 9 also did something that no version of Reason has ever done: it’s added a new class of tools, known as Players. Reason 9 comes with three players, initially. But, I’ll bet, since this is a new category of device, we’ll see more in the future. What you do get, especially when it comes to the Dual Arpeggiator, is more fun than I could have ever imagined. Seriously, it was like Christmas morning, with my brand new TR-707. 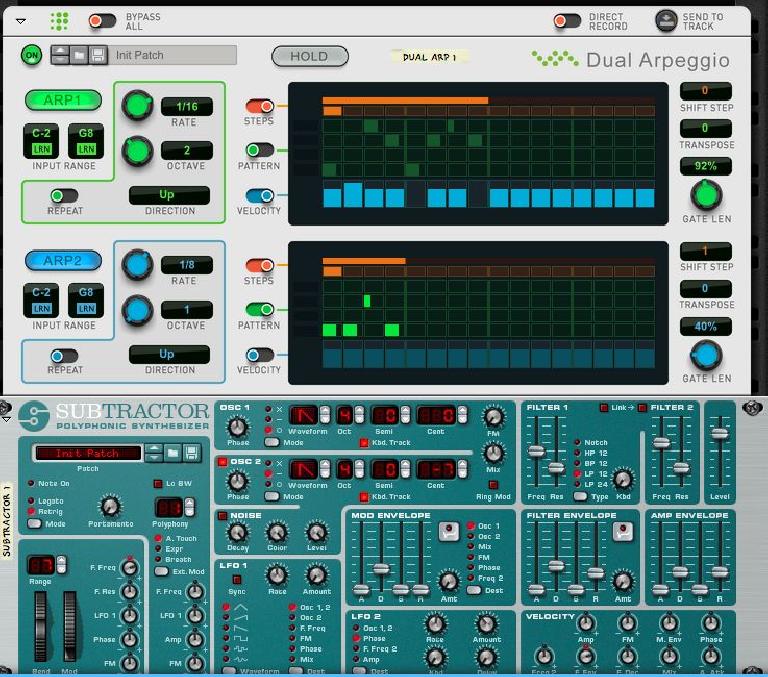 Dual Arpeggio, since I mentioned it first, just killed every other arpeggiator out there for me... Like the name states, there are two arpeggiators in one. Both allow specific programming for steps, specific patterns, and velocity programming. What I found particularly helpful, especially for Combinators, is the ability to map specific arpeggiators to specific key ranges. And, the ability to direct record, through the arpeggiator, over to the sequencer. And also a ‘Send to Track’ button to do a direct burn of the MIDI, over to a clip.

Note Echo is off the chain cool. I’ve used copying to create MIDI echoes for years to save CPU, and also just because it has a different sound. Having an actual device do this is awesome for creating sick, tight MIDI patterns without all of the copying and pasting. And, because you can take Note Echo out of sync, just imagine the kind of MIDI destruction you could output?!

Finally, the Scales and Chords player makes it one step easier for non-musician producers to have a chance of creating some sick MIDI performances. But, for the players out there, I don’t think you’ll want to shy away from this device, either. You can use it to quickly get chords from single inputs, experiment with chords, play chords without using a MIDI keyboard. Great when you are on the go! And, build your existing knowledge of chords and scales, while you work!

Reason 9 was not something I really saw coming. And I make this statement almost as an admittance of guilt to the Propellerheads. Reason changed music for me, irrevocably. It made me see that hardware didn’t need to be the beginning and end of my career. It showed me that amazing tools could exist within any package, and hold just as much of an emotional charge. Sometimes products go through awkward phases, just like teenagers. It’s easy to write off people, ideas, concepts and software when they go a strange direction that doesn’t make sense. But, when you accept those decisions, directions and even version numbers, even when they don’t make sense—More often than not, people and software, alike, will surprise you and cause you to grow, update and evolve, in turn. I am so glad I practiced acceptance and forgiveness towards my old friend, Reason and the Propellerheads. Now that I understand, it all makes sense. Reason 9.

Cons: Convert Audio to MIDI does not work polyphonically, Sequencer could still use some updates in basic MIDI operation.

jimijames
Nice review, G.W. I dropped Reason for a bit after 7 in favor of LPX. And though I'm still using LPX (it's amazing in it's own right) I may have to pay the upgrade fee to come back and see what my old friend Reason is up to these days.
Beat Stimulator
Hello,
Nice review. I am an avid Reason user and i really enjoy the upgrade to reason 9. The only thing I am dissapointed with is the audio to midi conversion. I have tried to convert bass lines or piano riffs and everything comes out on one note lane.
Amanichai
I had the same issue using the Beta version. Quick fix: open the pitch editor and auto correct the entire audio. Then bounce to Midi. That works for me.