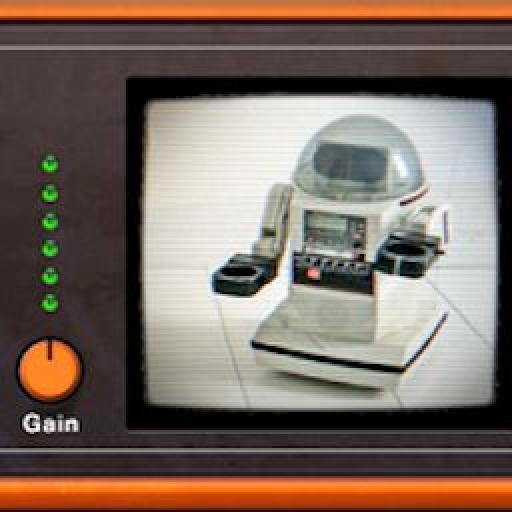 Language
The latest version of Propellerhead Reason is here! Mo Volans puts Reason 7's new features through a rigorous test, from parallel channels to the External MIDI instrument and the new REX features.

I've been lucky enough to have access to Reason 7 for a good few weeks now. I have spent quite a lot of time using its new features and although there is more evolution than revolution here, the updates are certainly going to be welcomed with open arms by hardcore Reason users.

Let's get stuck in and take a look at all the new features and tweaks the Props have added here...

Towards the end of March, a small macProVideo team was invited to The Red Bull Studios in London for a Propellerhead press event. After a good meet up and some geeky chat, we were treated to an expo of the latest incarnation of Reason... you guessed it Version 7! '¨'¨We were shown Reason 7's ability to create REX files directly from an audio clip, group and parallel channels and the addition of the much anticipated External MIDI Instrument. Although these features may not seem groundbreaking to the average Ableton or Cubase user, you can bet your boots they will to the Reason users out there.

After a few demonstrations from James Wiltshire of the Freemasons, we left with high hopes for the new version, looking forward to getting our hands on the beta. I've been running Reason 7 ever since and overall can say I've really enjoyed the update. Let's break down the new arrivals... 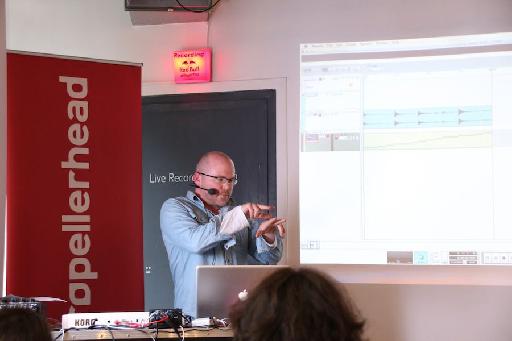 James of the Freemasons gets into Parallel channels at the RedBull Studios Event.

Group channels are nothing new in other DAWs, but they have just arrived in Reason 7. Let's not play this down though, Reason users have been waiting some time for this and the elegance in which Propellerhead have implemented this feature is great.

Group track creation is an instant process and works perfectly with zero latency and a solid, clear workflow. More interesting however is the implementation of parallel channels. Creating a parallel, mirror image, of your audio (or instruments) has always been possible by simply copying the data, but now you can do it right within the console itself.

A single click will give you a duplicate stream of your audio and most importantly, the new audio produced is replicated at a '˜pre-fader' level. This essentially means it's 100% dry and unaffected by any processing applied to the original. The result is also totally phase coherent and I've had no problems with timing at all.

One of the most highly anticipated updates here has to be the addition of external MIDI support. You heard right, you can now hook up your MIDI synths directly to Reason 7. I used a Nord Drum and a Moog Slim Phatty for this purpose, and I have to say the whole system worked perfectly.

Outgoing MIDI is tight, with flawless timing and setup takes about 5 seconds. A few things you should know before you get hugely excited... Reason by default sends MIDI out but does not receive it.

What this means is that if you want to record MIDI controller data it can be done, but you need to set up your synth as a control surface in the preferences. Not a big deal really, but it would have been nice to avoid the extra step.

Also if you want to monitor through Reason, you have to use a dedicated audio channel. This allows you to add effects, etc. in real time. I found the latency to be almost imperceptible when working in this way but again, it would have been perfect if this had somehow been rolled into the External MIDI device.

All this aside, it's great to have full MIDI functionality in Reason 7, and it brings the app one step closer to being the DAW killer that many people think it can be.'¨'¨

The console-based EQ has always been a bit of a gem. It's extremely musical and generally works well with pretty much any element in your mix. In Reason 7, you'll find a graphical representation of the console EQ coupled with a new spectrum analyzer. The Props made it very clear at the press event that this is not a new EQ, but rather an expansion of the existing one. 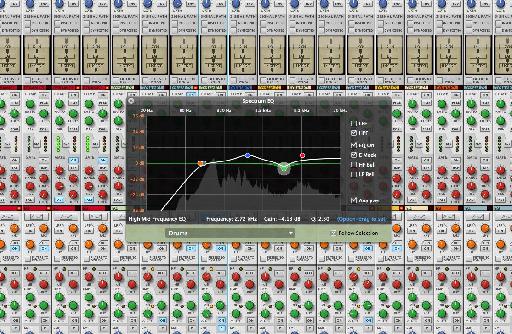 I found that using the EQ with the new interface was incredibly refreshing and I have to say I actually prefer working this way. I don't use it 100% of the time, but the ability to visually see the effect of your tweaks on the sound in real time is certainly welcome.

Another of the main attractions here is '˜in-line' REX creation. Simply put, you can now create and edit REX files without ever leaving the confines of Reason. I've been hoping for this sort of functionality before Reason was even conceived... ok so that may be a slight exaggeration, but I've been after it for a while at least.

This streamlines the process of getting your audio loops into an OctoRex by an amazing amount. What used to be a task that involved multiple applications can now be achieved with just a few clicks.

By double-clicking on an audio clip, you will be presented with a series of '˜handles' on each of the transients. These can be moved, deleted and created. This process will be very familiar to those who own Recycle.

The resulting '˜sliced' audio can then be moved around right within the editor or exported as a REX file. This will then appear in the media library and can be double-clicked to create a new OctoRex preloaded with the new loop.

So ultimately, this new feature gives us the ability to tweak the groove, timing and placement of individual hits and slices within your audio AND export Rex files with a single click. Very good stuff!

We've covered just about all the major updates here, but there are some extra tweaks and features worth mentioning. Top of the '˜B List' has to be the new Audiomatic device. It's a bit of a weird one but a lot of fun.

It reminds me of the Scream 4 a little and basically allows you to choose various models with which to mangle your audio and instruments. There are tape, vinyl and amp models here, as well as more unusual robot voices and machine code type effects. It's a lot of fun and pretty quirky. The Audiomatic is an interesting addition to the R7 rack.

As you might expect, Reason 7 also comes bundled with an expanded sound bank that will have you covered across a number of genres from dubstep to metal! And bringing your own sounds into Reason just got a whole lot easier, too. The Props have added support for a wider range of audio formats, including mp3, aac and even wma.

Finally, there are a number of cosmetic tweaks such as new graphical touches to the rack mixer devices and console faders. You may not notice these at first, but they are there and they do make the whole app look that bit slicker.

All in all, this is a solid update bringing features that Reason users have been after for a while now and if you are thinking of moving from your current DAW, there really has never been a better time.

BPGeez
Mo Volans! Ur the coolest!!
jimijames
Thanks for the update Mo. Looking forward to macprovideo covering Reason 7 down the road.
spencer
the new version of Reason 7 is awesome

only been a few days of getting my upgrade,but have seen a lot of changes so far

Cannot wait to use it properly and ,make some tracks