This one-stop shop for scoring movies, TV and games comes with a heavy focus on horror, action, sci-fi and blockbusters. Hollin Jones delved into its vast library of sounds.

The explosion in the number of TV channels and streaming services available means that composing and scoring for picture has never been in greater demand than it is now. ProjectSAM has been at the cutting edge of creating sampled cinematic scoring libraries for many years and the latest addition to its lineup is Pandora, the fourth member of the Symphobia family. Each one is broadly themed - version 3 is designed for more fantastical and mysterious productions, whereas this new library is very much tailored towards action, horror, sci fi and blockbusters.

It’s a huge, multi-part download that unpacks to a 76GB folder of samples and instruments, so laptop users are going to want to have a strategy possibly involving an external hard drive to store it on. Running in Kontakt 6.1 or higher (including Kontakt Player), it’s authorised via the Native Access app. Once inside, the sounds are grouped into 7 categories, each with multiple instruments inside containing folders. Some are individual instruments - there’s a common design and layout to each one - and some are combinations of multiple instruments stacked together to form combos. 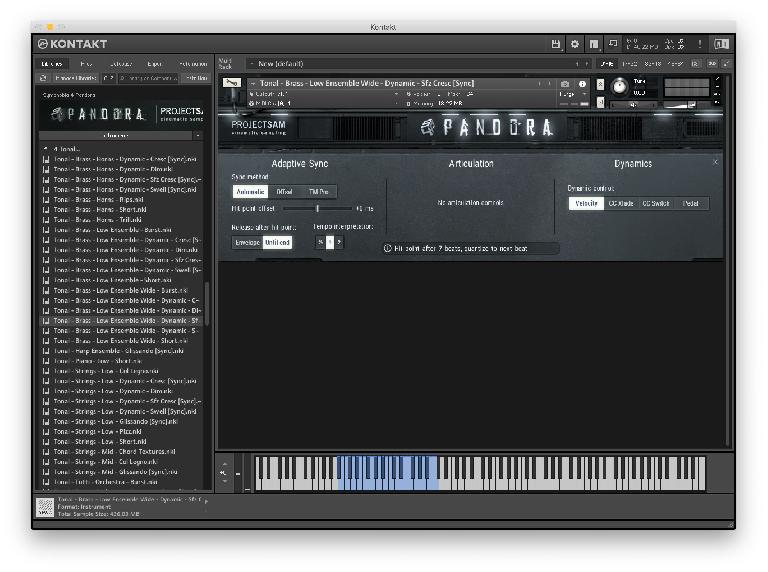 Adaptive Sync To The Rescue

One of the problems that composers have when working with time-based cinematic sounds like rises, sequences or percussive loops is that they are not tremendously flexible when they exist in the form of samples (as opposed to being synthesized in real time). Yes you can time stretch samples, but this can be tedious when you have to do it repeatedly. Pandora’s solution is something the developers call Adaptive Sync. Put simply, this is a way of automatically ensuring that every time-based sound that has for example a start, crescendo and then a stab at the end, syncs to your project’s tempo. The behaviour of the syncing is also of course editable, so you can make a sound take longer or take less time to get to its end point, but it will always end at the place you have specified.

This works seamlessly but behind the scenes, a lot is going on. If you change tempo for example, the system automatically selects the most appropriate version of the sample from its library, to match. It’s something that is going to save composers a huge amount of time that would otherwise be spent aligning MIDI notes and time stretching samples. Over the course of a whole soundtrack the time savings could be considerable.

The key to creating believable and dynamic scores is having sequences that don't just sound static and repetitive. The orchestral instruments here have a wide range of articulations available, and these can be assigned to MIDI notes. So again, sounds are not static but can be quickly modified to play in a different style or with a different accent on different notes or beats. Taking things even further, entering Sound Design mode allows you access to the samples themselves, with the ability to reverse the sound, change start positions and so on. The Mics section also lets you change the balance of different mics - up to four per patch from the original recording sessions, and a powerful effects section adds another layer of atmosphere to everything. 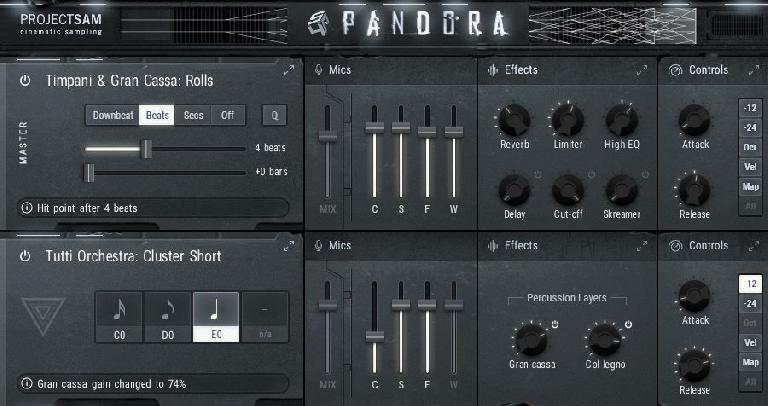 In addition to haunting swells, rises and stabs, the instrument contains some other very useful types of sounds. Cluster and Tonal Pulses are clusters of notes for the strings, brass and woodwind sections. For each pulse, a matching crescendo and staccato crescendo phrase is available. These make it easy to quickly create and modify dynamic, moving sequences to underscore onscreen action. Finally, Combos layer together multiple individual sounds to create truly massive results - whole soundtracks under just a couple of MIDI keys in many cases.

Pandora does a fantastic job of covering almost any base that someone composing for action, horror or sci fi might need. All the touchstones are there in terms of hits, rises, swells, sequences, tones and textures. The addition of Adaptive Sync means that tempo matching is no longer really an issue, and you’ll quickly wonder how you ever lived without it. The articulations are great as well, and the cluster feature also makes it much simpler to create patterns and variations, all while staying in sync.

Some of the patches are stylistically quite on-the-nose, in the sense that you hear them and instantly think “oh, action sequence” - though that’s not a criticism since it’s pretty much what the library is aiming for. Certainly if you need instant results, you will find them here. And there are so many sounds that you won’t run out of material any time soon. For more adventurous sound designers, digging a little deeper into the sound design section, effects section and articulations means it’s possible to customise and reshape sounds and dynamics pretty easily. Plus, the workflow and layout are straightforward, especially for an instrument that has such complexity behind the scenes. For anyone composing for modern action or horror - including games - this library is a one-stop shop for all your scoring needs.

Learn more about composing for fiml, tv and games with these pro video courses: https://ask.audio/academy?nleloc=category/audio/topic/musiccomposingscoring