Language
The Lyra 2 is Prism Sounds first offering into the travel friendly USB audio interface market. Bill Burgess runs it through its paces to see how it stacks up.

Prism may be a new name to many readers but the company enjoys near unanimous acclaim in the upper reaches of the pro audio industry for their superior audio convertors and test equipment. It makes sense. It's all about the sound. But I'll share more about that later. Lets have a quick overview of the Lyra 2.

When I first pulled the Lyra 2 out of its packaging, I would imagine a small grin appeared on my face. As a musician who travels a fair bit, the first thing I check for in new equipment is the possibility of knob shear. That condition where pots and faders get bent, and even sometimes break and get lost under the rigors of travel. Isn't gonna happen on the Lyra. The knobs are solidly attached and well built. The footprint of the entire unit is roughly the size of a 9 x 11 piece of paper. It's a bit on the husky side in terms of weight, but I don't mind. After several flights I can tell you it travels very well in my laptop bag. The front face is a tasteful gunmetal gray that resists fingerprints nicely. The metering is excellent and surprisingly high resolution given its smaller size. It comes with two well built SPDIF to AES RCA to XLR pigtails. As far as software, I was up and running with drivers installed in 5 minutes. 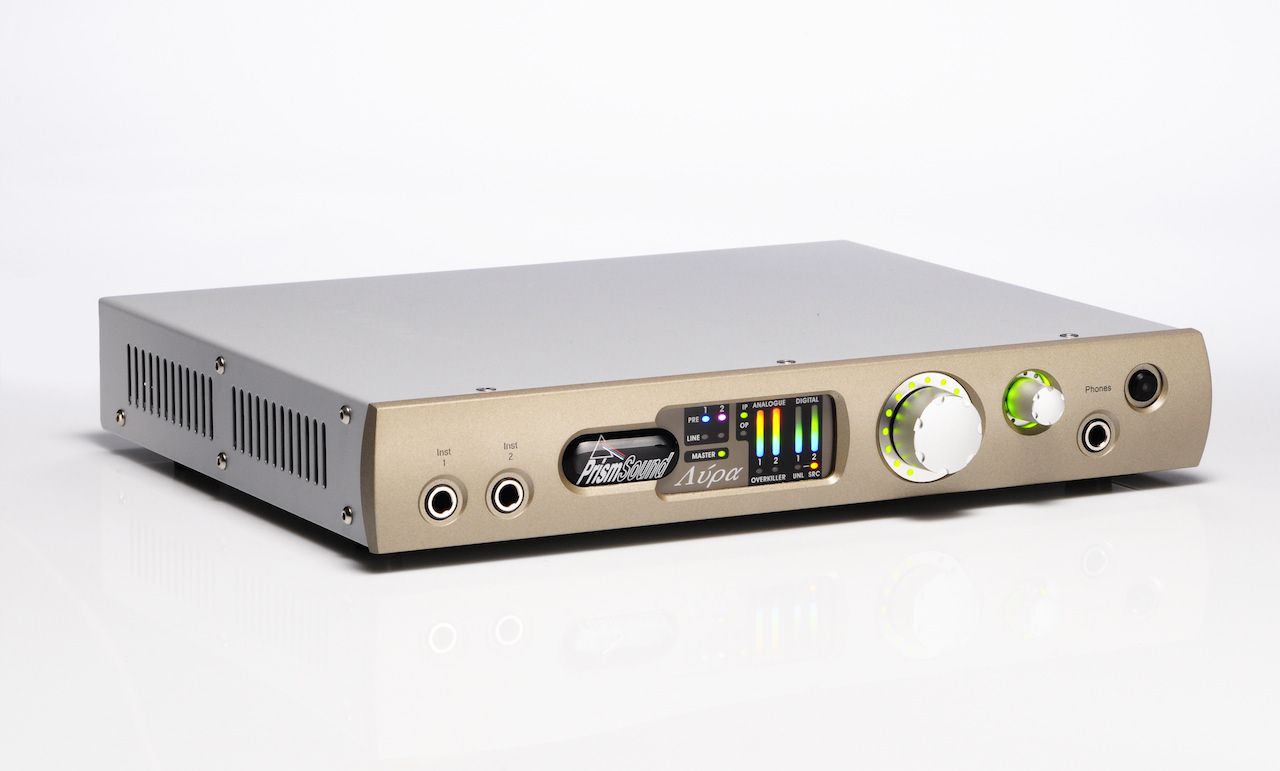 The Lyra 2 interface has four analog input channels, two high impedance line inputs and two microphone inputs. The two HiZ inputs are essentially two premium quality DI boxes for guitars, basses, drum machines, etc. One could easily send DAW channels out of the Lyra, process them through plentiful pawnshop guitar pedals, and then bring them back into the DAW via the HiZ inputs for premium conversion back to digital.

Nice! But it gets even better. The Lyra has the same high quality mic pre-amps as Orpheus. They feature software-controlled gain in 1dB steps, switchable phantom power, a 20 dB pad—and very low noise and distortion. These inputs are auto-sensing with software over-ride. Each of the analog inputs have individually-selectable Prism Sound "Overkiller" peak limiters built in, just as on the higher-priced ADA-8XR and Orpheus, to catch those fast distortion inducing transients. If you have ever tried to record drums or close-miked VO or percussion without a limiter or compressor, you can instantly recognize the value of an Overkiller function. It provides real-time limiting of the signal, preventing digital overload. This feature alone can save many headaches and even your reputation as a recordist down the road. The pre-amps are extremely clean and accurate with very little coloration. They are comparable to my $3,700 Focusrite Red One, if a bit less noisy and cleaner. In my opinion the Lyra 2 is nearly worth the price on the basis of the HiZ inputs and mic-pre's alone. It also runs without a computer, making it a future proofed bit of kit that retains value even if USB somehow falls out of favor. 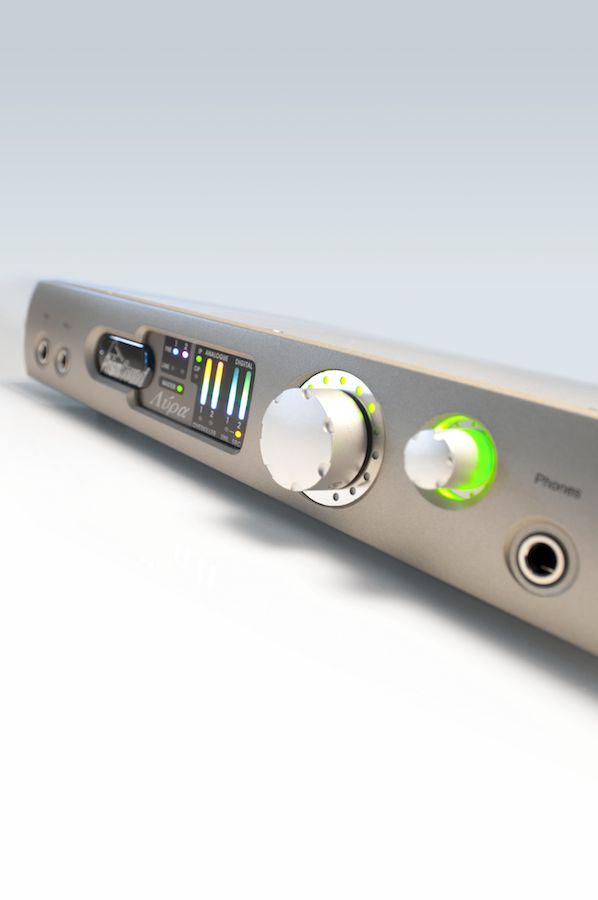 When the Lyra arrived, I had been working and mixing on my built-in input for about a month. I wasn't expecting much. Boy was I wrong. The Lyra sounds absolutely stunning. Even running a low fidelity Pandora stream, everything instantly got wider and more precise. I heard imaging, depth and width as never before. The detail and punchiness of the bass is excellent. After a month using the Lyra, I hit a major breakthrough in the quality of my own mixes, and I have to give much of the credit to the Lyra. I can simply hear everything, flaws and all, better. Like I said earlier it makes sense. Prism was founded by two engineers who met while working on groundbreaking DSP research for Rupert Neve, king maker in the world of analog circuitry and recording.

Even running a low fidelity Pandora stream, everything instantly got wider and more precise.

As far as software, the Prism control applet isn't the worst I've seen. But I may need to recuse myself here. I can walk up to almost any analog or digital console and get something going within minutes. But when it comes to nearly all of the digital audio applets I've used to date, this one included, I've been like a child lost in the woods. I've come to the conclusion that using a tabbed structure instead of a fully laid out console just ruins my ability to “see” where the signal path needs to go. Early on, I had a bit of trouble setting up the Lyra to do more complex routing options, but once I got it I was fine. I found much of the software to be easily understood, but if I were called on to set up the “zero” latency headphone monitor mix the Lyra offers I would certainly allow myself extra time. 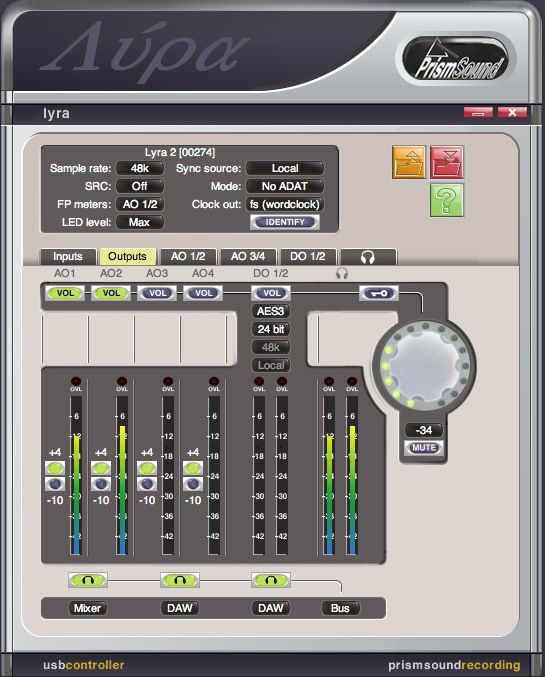 I'm deeply impressed with the Lyra 2. While it may be quite a bit out of the range of many beginners, it is an obvious must for traveling producers and musicians who insist on the best possible fidelity for their work. Having four inputs hasn't limited me whatsoever. In fact, the other day I used the Lyra as a master digital clock at another project studio with a name brand PCIE audio system with multiple inputs. The Prism clock made a remarkable difference in the fidelity of that system as well. All in all, it's a remarkable and flexible piece of kit that I can highly recommend buying.