Language
Those who score music usually reach for Sibelius or Finale. However, PreSonus have recently acquired Notion, which at version 4, looks set to provide a capable alternative. Lynda Arnold checks it out.

Notion 4 is the latest notation software release by PreSonus. PreSonus, an industry leader in the development of audio hardware and software, has just acquired Notion, adding it to their growing list of high-quality products. In a competitive field dominated for years by Finale and Sibelius, Notion 4 gives these established brands a strong run for their money with an intuitive interface, a wonderful built-in sound library, and 64-bit support. Notion is not only powerful, but very affordable compared to its competitors, at $99 for download and $129 for the boxed version.

There are many features unique to Notion worth mentioning. In fact, there are many features unique to big DAWs integrated into Notion that allow composers to use this program as a standalone, increasing workflow and productivity. I was able to dive right into recording parts without having to dig into tutorials or the manual. This is a testament to great design. With that said, there is a user guide built into Notion and an extensive collection of video tutorials in the media section of the Notion website that can help get you started. 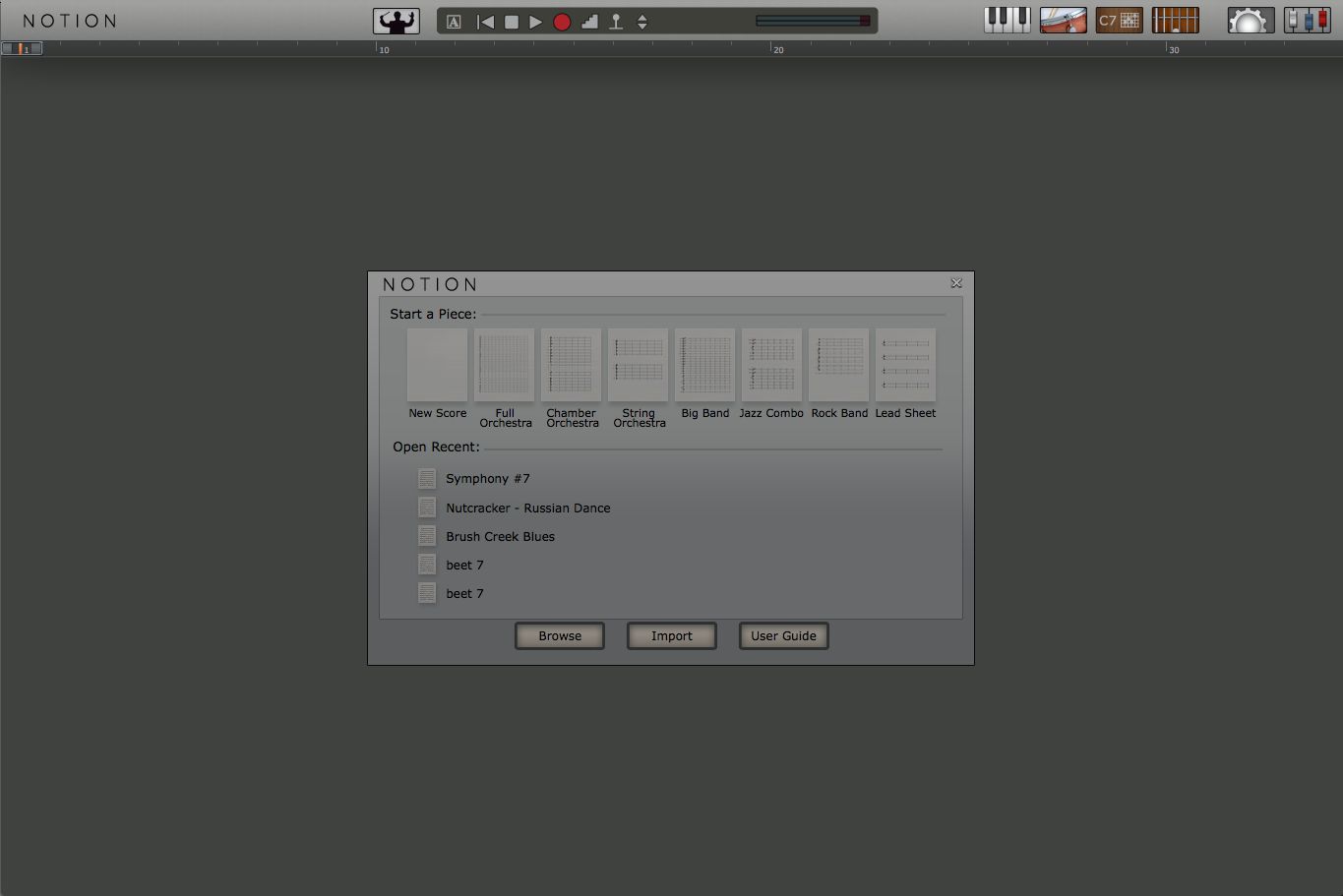 There are a number of useful scoring templates to choose from after launching Notion. They provide the most common: Full Orchestra, Chamber Orchestra, String Orchestra, Big Band, Jazz Combo, Rock Band and Lead Sheet. Or, you can build one from scratch. Editing the score template with the Score Set-Up window is easy. At the end of the article, I've provided an orchestral score and a guitar-based score screenshot from the Notion website so you can see how detailed scores in Notion can get. Many ways to Input 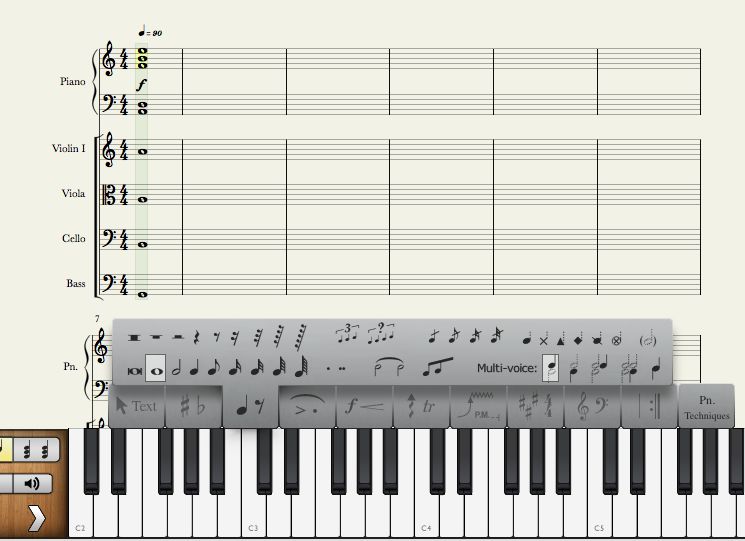 There are many ways to play parts into Notion that will appeal to every instrumentalist. You can play in parts with the on-screen or outboard midi keyboard, with the drum pad section, or with the guitar fretboard. For more detailed work, notes can be placed on the staff with the mouse or by using the step sequencer. Notion has 64 levels of undo, so don't worry if you happen to make some mistakes all the way. I also like the chord library for making lead sheets and jazz scores. The layout is clear and provides all the main chords you would need.

Notion is host and slave Rewire compatible. It can be run through any major DAW like Studio One, Pro Tools or Logic and also host VST instruments as well. There is built-in integration with Vienna Symphonic Library Special Edition Plus 1-4, Miroslav Philharmonik and Garritan Personal Orchestra. This is great news for composers who like to write with certain instruments from these libraries. When you launch another sound library, the individual instruments show up in their own slots separate from the VST instrument section and can play all the articulations and dynamics that you play or program into the score. Make sure that your external orchestral libraries are authorized and up to date before launching them within Notion. Notion's Sequencer Staff and Sequencer Overlay, are definitely standout features for the program. Sequencer Staff shows MIDI notes instead of the traditional notation for composers who like to edit velocities or note lengths by dragging MIDI notes. Sequencer Overlay shows the midi notes and traditional notation at the same time, so composers and editors can access both. This is the first time MIDI notes have been integrated into notation software in this way. Notion also offers MIDI merge recording mode to composers for stacking parts within an instrument or for building expression cues in sections. This is similar to other DAWs but extra useful in this application.  It's clear that Notion developers want composers to use this program as a standalone composition tool.

Notion for iPad ($14.99) is a perfect compliment to Notion users. Compositions can be swapped between devices for editing and composing on the go. Notion is the only notation software that allows for editing and composing on the iPad with the function of transferring files between devices. The competitors are currently 'read only' on the iPad. This sets a new standard for audio software developers to create programs that appeal to both iPad and computer version users, increasing their market reach. Notion for iPad installs with some classical music demo scores for playback and study, a useful tool for musicians who like to learn from interactive examples. I would use Notion for iPad in my music lessons with students who want to learn more about composition. 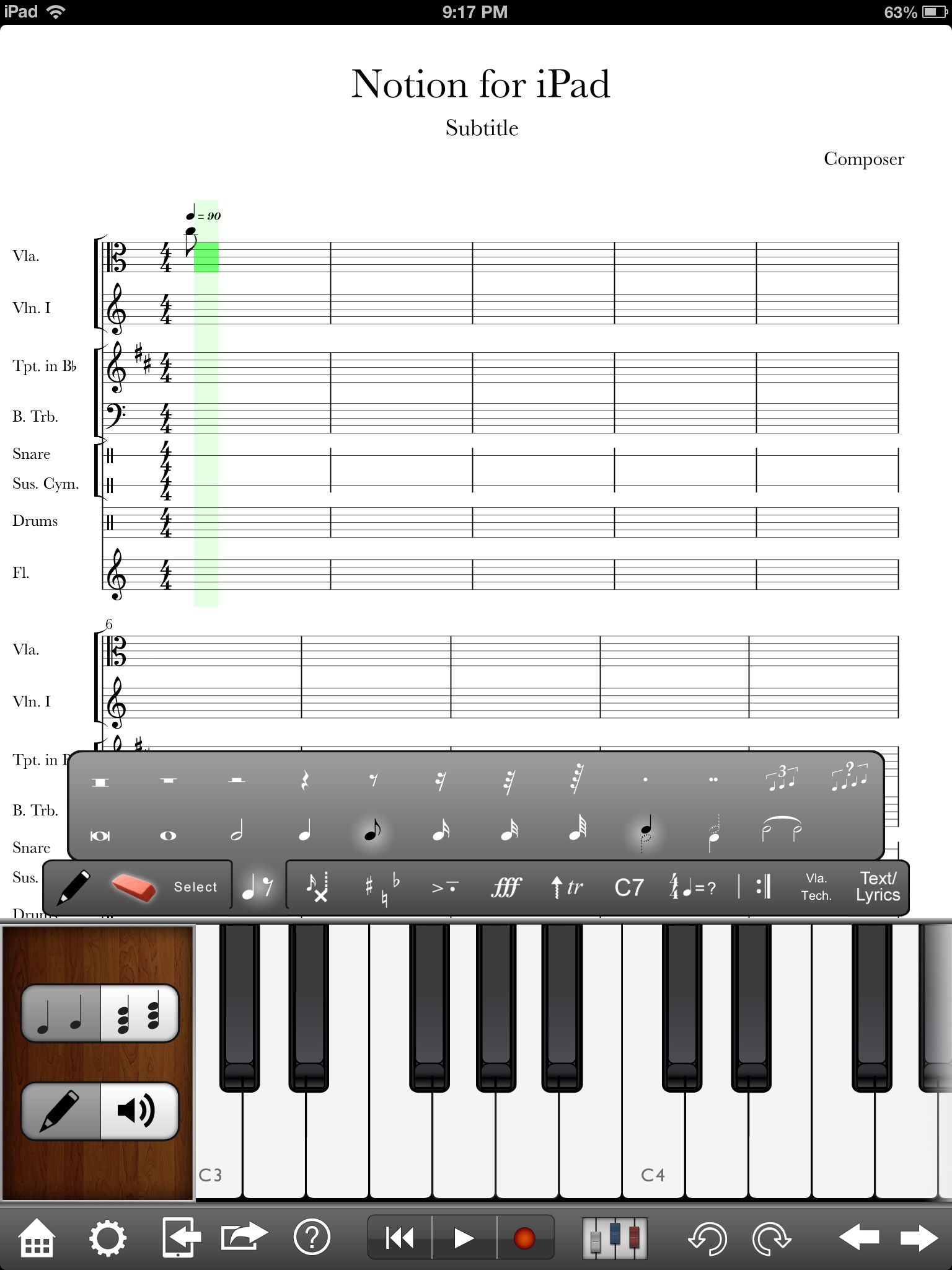 A Tool for Learning

Notion is a great tool for instructors and music students alike. I can easily create scale sheets, lead sheets, simple arrangements of songs and exercises for my piano and flute students. I use my iPad for music theory Apps already, so Notion is a logical addition to the musical teaching palette. And, students would have fun creating simple scores of their own. Students can work in the lesson or at home and transfer files back and forth for me to check in with their progress. This program potentially opens up the notation software market to a whole new generation of music composers who value ease of use above all other bells and whistles.

Notion appeals to a wide range of composers, producers and music educators and is quickly becoming an integral part of studios, thanks to great design, great customer support and compatibility with the iPad. Hrubehs
Hi great tutorial, i got only a question, is it possible with this software to register an instrument connected to the sound card like a guitar, and does the software automatically create the notes on the sfaff?
Thank for the answers