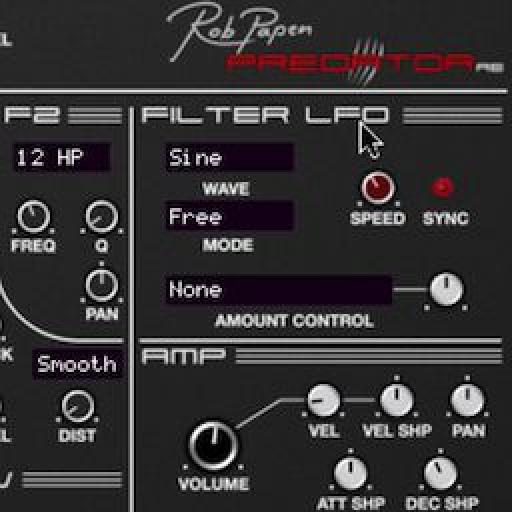 Language
What do you get when you cross Reason's Rack Extension technology with Rob Papen's killer synth, Predator? Predator RE!! G. W. Childs explores how much depth this will add over existing Reason synths.

Rack Extensions have been available for several months now, and I know for myself, they've really changed my whole Reason experience. With effects like Buffre, Polar, Echobode, and the like, how could it have ever stayed the same?

But, it's largely been effects that have dominated the Propellerheads RE Shop. Seriously, if you take a look, very few instruments have come along. Granted, the instruments that have are completely off the chain. Korg PolySix, anyone? But, there hasn't been a killer synth to come along and give the native, Thor, a run for it's money.

Well, Rob Papen has finally thrown his hat into the mix with an already famous synth of his, Predator. And, the big question is, how does it fit in with Reason?

What's Up with Predator?

Predator is a 3 oscillator, 2 filter, mega synth with 3 effects processors built-in to it. And, it comes with a slew of patches made by the man himself, Rob Papen and many other well known friends like Junkie XL. For those of you who don't know him, Rob Papen has been party to many of the presets filling staple synthesizers like the Access Virus.

I must admit, as a former owner of an Access Virus, I was more than happy to hear that Rob's patches would now be available in Reason, in some form. But, how do they sound in comparison to some of Rob's earlier work on the Virus? Well, much closer than I had even anticipated. There are tons, upon tons of extremely useable patches that are entirely reminiscent of the Virus in some cases, and completely different in others... But, in a good way. So, for a guy that loves '˜that sound', this was money already well spent.

But, patches aren't really enough are they? Of course not! This is Reason! So, while we want an instrument that does a good emulation, we also want something that brings new options, in terms of Control Voltages.

Well, Rob covered this as well. Predator has an extremely powerful arpeggiator that, in my opinion, has far more functionality than the beloved RPG-8. For instance, you can actually program basic melodies in to the Predator, where the RPG-8 only allows you to select note on and off for rhythm purposes. When you add in features like Tie Mode, and classic dance modes like Chord mode, you have yourself a very powerful arp.

And, Reason makes it even more powerful, as there are control voltage outputs for the arp. So, even if you aren't into the dreamy, electro sound design prevalent through the patches of Predator, you can use the Predator arp with an instrument that you really do like.

So, What's the Verdict?

By the time you're reading this, a newer version of Predator will be available with newer oscillators than what were being used in 1.0. This update is also currently available for the VST and AU version. The new anti-aliasing oscillators sound far better and makes Predator, as a whole, much lighter on the CPU for Reason and for the non-Reason version of Predator. Having A-B'd the sound against old version and the new, I can tell you there is a huge, huge difference. In addition to the new oscillators, two new banks of patches are being added, Dubstep 1, and 2.

Personally, I really enjoy Predator. I think the hundred dollar price is right, and truly believe that this will be a centerpiece in my virtual studio. And, as a nostalgist, having Rob's style of sound design easily at my finger tips, for a change, makes this a '˜must have for me'. But, when I add to the fact that the developer continues to update their work in big ways like this, this gives me a feeling as a consumer that I'm buying a piece that will be well supported into the future.

So, in closing, I'd suggest picking this one up... Even after the 30 days of '˜Try' are over. True depth will be added with this one. Especially with the new oscillators.