Language
Positive Grid's BIAS FX guitar FX processor has been a hit on iPad, so we were happy to see it come over to Desktop too. Toby Pitman plugs in and finds out if BIAS FX is a worthy desktop equivalent.

A little while back Positive Grid ported their Bias amp modeling software from iOS to a desktop version. This allowed you to get all the amp goodness of Bias inside your DAW.

Bias FX is a new take on Positive Grids other popular iOS app JamUp. This integrates the amp models of Bias (which are top notch) and combines them with models of many popular guitar stomp boxes and studio effects into one plugin.

The main difference between Bias FX and Bias (besides the effects) is you can’t tweak the amps complex internal settings like you can in Bias Desktop. So what you get are essentially some preset amps to play with. You can however still tweak the front panel and Cabs/Mics, etc. The ‘Pro’ version contains 32 amps compared to 12 in the ‘Desktop’ version.

The top half of Bias FX is where you build your rig. This can consist of any combination of pedals that can feed not one but two amp models. These can then be fed into post amp effects like studio compressors, reverbs, etc.

You build a rig by dragging and dropping from a list of effects (grouped into type like Comp, Drive, Mod, etc.) into your signal path. Just click an effect to edit. 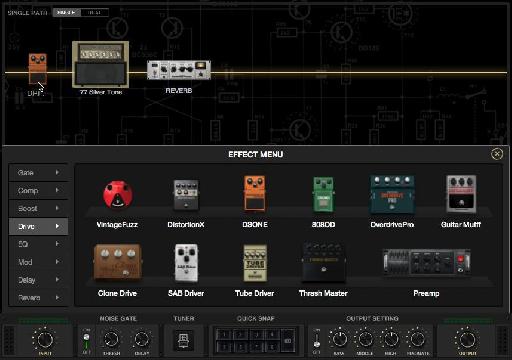 To change an amp just double-click it and select a model in the browser. If you own Bias Desktop you can easily load any custom amps you’ve made (or expansion pack models) into Bias FX Desktop by double-clicking an amp in the top panel and going to the ‘Bias Amp’ tab in the selection window. 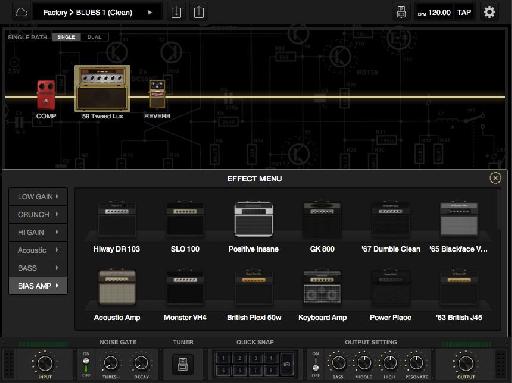 At the bottom you’ll find a Noise Gate, Tuner and global EQ. It’s all fairly easy to navigate and you’ll be up and running pretty fast. You also can switch to a fancy ‘Pedal Board’ view as well if you like.

Bias FX can work in both Single and Dual amp mode. This means you can split the signal path into two discreet chains of amp and effects and blend into a final output. This allows you to create some interesting tonal patches. You can split by frequency or in an ABY type fashion. 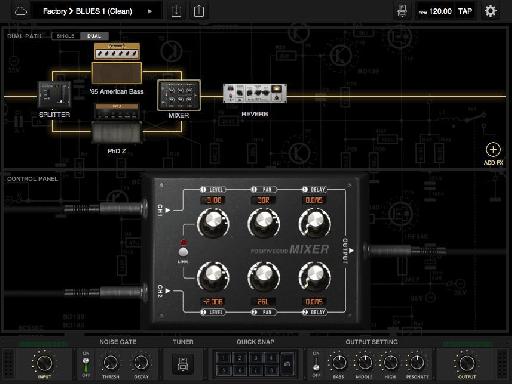 One curious thing is how Bias FX deals with its stereo effect models in front of a mono amp. You’d think that if you only had a single amp (mono) that any ‘stereo’ pedal that was fed into it should be summed to mono. That would be expected behavior right? Annoyingly Bias FX hasn't done this in the first release and instead stereo-izes (I made that word up) the amp? It limits your choice of a mono chorus effect into an amp to one pedal (the yellow one) which has a width control that you can turn to zero and make mono. This needs to be addressed. (Editor's Note: Positive Grid informed us this is now fixed!).

Bias FX comes with a pretty good selection of presets to get you started covering a wide range of styles. There are also a few simple ‘sample’ presets as starting points.

There is also the Cloud feature which is great. Once you're logged in to your account via the plugin you have access to literally hundreds of user presets uploaded to the Cloud. You can of course share your own creations too. This is a great feature and very well integrated into the plugin. 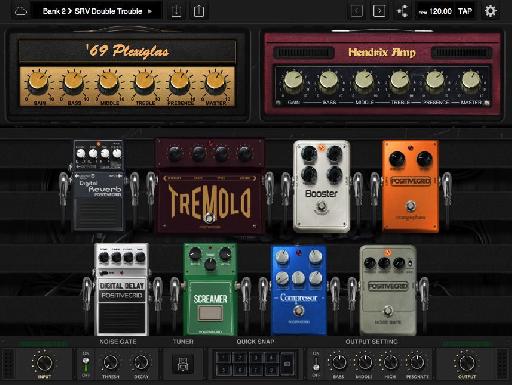 The only thing missing are forward/backwards buttons for presets. It would cut out the three or four clicks it takes to call up a new patch every time which can become tiresome. Effects Bias FX comes with a truckload of both stomp box and ‘studio’ effects. Everything you need for guitar and bass is here. From compressors, drives, delays and a wide variety of modulation effects you’ll have a great deal of fun making that perfect pedal board!

The quality of the effects are pretty darn good and I found myself making some highly useable sounds. Unfortunately the Wah and Whammy pedal are rendered useless due to the fact you can’t move them with anything other than a mouse. More on this next.

Bias FX Desktop has a few big drawbacks at the time of writing this review when it comes to DAW integration. Before we go into them, Positive Grid have assured us these are “on their task list,” and “will be coming soon.” However, as we’re reviewing this first version of BIAS FX Desktop, we feel the need to highlight these regardless. (Editor's Note: Positive Grid informed us all these issues are now fixed!)

In the first release, there is no option to instantiate a Mono > Stereo version of the plugin.

Guitar DI inputs are recorded to mono tracks right? If you make a piece of software that boasts high quality stereo effects for guitar it’s probably a good idea to have some sort of logical DAW integration that converts a mono track into a stereo output on the back end of it at the DAW level!

This is a rudimentary feature of all (yes all) ‘professional’ amp sims that integrate stereo effects into the signal path post amp. So unfortunately not in Bias FX 1.0. So, here are your options:

This internal ‘Mono to Stereo’ thing is something that works great on an iPad but if you're going to port to Mac and PC you need to get with a modern DAW architecture! Otherwise it feels like you're using... well, an iPad!

Speaking of DAWs this brings me to automation... there is none. Nada. Zip. Nought. There’s also no MIDI control either. Heck, even the iPad version has MIDI control! (Editor's Note: This is also fixed in the latest version.)

This renders the plugin absolutely static in your mixes. You can’t toggle pedals on/off, tweak delay feedback, automate snapshots, etc. This is extremely important stuff! What’s the point of a Whammy pedal if you can’t... Whammy it?

Again, Positive Grid have told us these are on their list for future updates, so hopefully soon after you read this, they will already be fixed.

So here’s the way I feel about Bias FX. It sounds really good and is really fun to play with. You can let your imagination go wild with a bunch of great sounding amps and effects in all sorts of creative signal chains. I’d use that in production. That’s all great!

However, I feel if you want to bring an iPad app to a desktop market you need to give it ‘desktop’ features!!

Don’t get me wrong. I think Bias  Desktop is one the best amp sims available for your DAW and a really, really great product. And even though that has no track or MIDI control either it’s less of a problem as it does one thing well: Amps! And it does it better than most. Bias FX Desktop claims to be a 'complete tone solution', once it can be controlled in real time, this might be the case.

Cons: In version 1.0 we tested, there’s no DAW automation or MIDI control. Hopefully Positive Grid will change this soon to make Bias FX Desktop more worth the asking price.