For so many years now, the tools of music production have been moving more and more inside the box, but here’s a product that takes the opposite approach, in a pretty dramatic way. Polyend’s PERC PRO is a mechanical drummer system that provides a collection of beaters which can play a real, physical drumkit, controlled from MIDI (or analog CV/Gate) triggers. 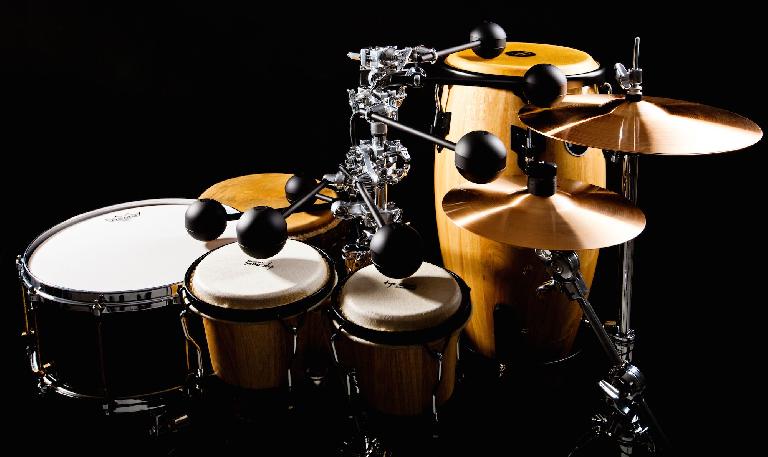 Thinking Outside the Box

PERC PRO provides an alternative to sampled drum sounds—a system of mechanical beaters, managed by a converter box, lets the user “play” a real drum kit from either MIDI drum sequences or CV/Gate trigger signals from an analog sequencer. This can allow songwriters or EDM composers to enjoy the sound of real acoustic drums and percussion, even with parts that might be beyond a human drummer’s ability—many of the very fast, very complex mechanical rhythms often found in modern music styles can be “performed” on a real kit with ease, thanks to the speed and sensitivity of PERC PRO.

But you can also play real drums live—it was quite a trip to be able to tap out rhythms on a MIDI keyboard and have the acoustic kit pieces respond in real time (in fact, the audio examples below were created from MIDI drum parts I tapped out in real time on the keyboard). And of course, you’re not limited to basic drum kit or percussion instruments—any collection of suitable surfaces could be turned into a percussion ensemble.

PERC PRO is not really a replacement for a live drummer—nothing can substitute for the individual style and nuance of a top-notch performer. But it could be used to augment a live drummer, adding more mechanical/sequenced components to the drummer’s performance. And it could definitely add the rich sound of acoustic drums and percussion to what might otherwise be a more electronic/sampled tonal palette. For DJs and EDM artists, the visual aspect could certainly provide an extra level of excitement on stage—instead of simply generating electronic drum parts from within a DAW, they could sequence and even play acoustic sounds from their rigs, for a more dramatic performance element.

So what does a PERC PRO kit consist of? A set is made up of beaters, cables, clamps, and a brain/controller, which is capable of handling up to three beaters—I tested a full three-beater set (multiple sets can be combined for larger setups). In the box—incidentally, a very nice flight case—were the three beaters, clamps (to affix them to drum or mic stands), cabling to the controller, and the controller itself. 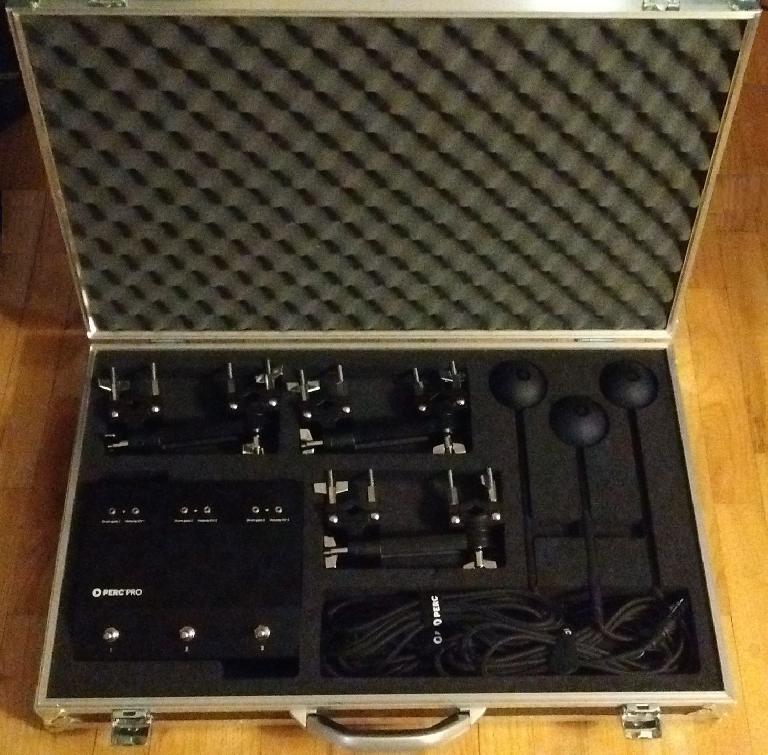 The controller has full MIDI i/o (including the MIDI input from your drum machine, sequencer, or DAW), as well as CV/Gate inputs for each of the three beaters, for use with analog synths/sequencers). There are connections for the (captive) cables attached to the beaters, and finally, a USB jack and standard power cable connector. 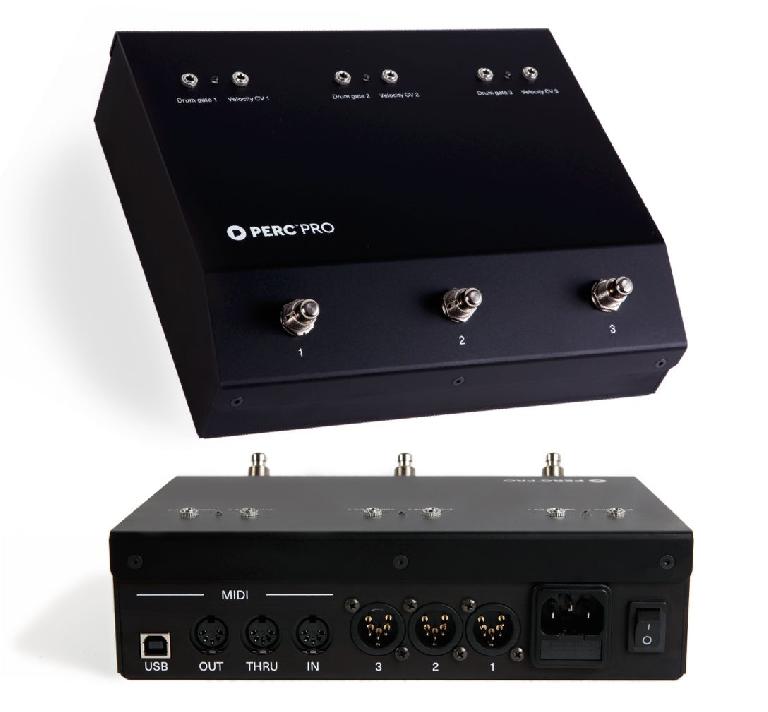 Three footswitch buttons let you set up the incoming trigger signals, a process which couldn’t be simpler. Holding down a button for a couple of seconds puts the box into its learn mode—you then send a signal from the controlling device (in my test this was a MIDI output from Logic Pro X), and the PERC PRO controller learns the note (and MIDI channel) that the corresponding beater will respond to. Once this is done, and the beaters are set up and in place, you’re ready to start triggering drum and percussion parts.

I tested the 3-beater PERC PRO set with a small drum kit, consisting of kick, snare, and that controlled via MIDI from Logic on a MacBook Pro. Setting up the connection between DAW and controller box was as I just described. I attached the beaters with the included clamps to both drum stands and mic stands. 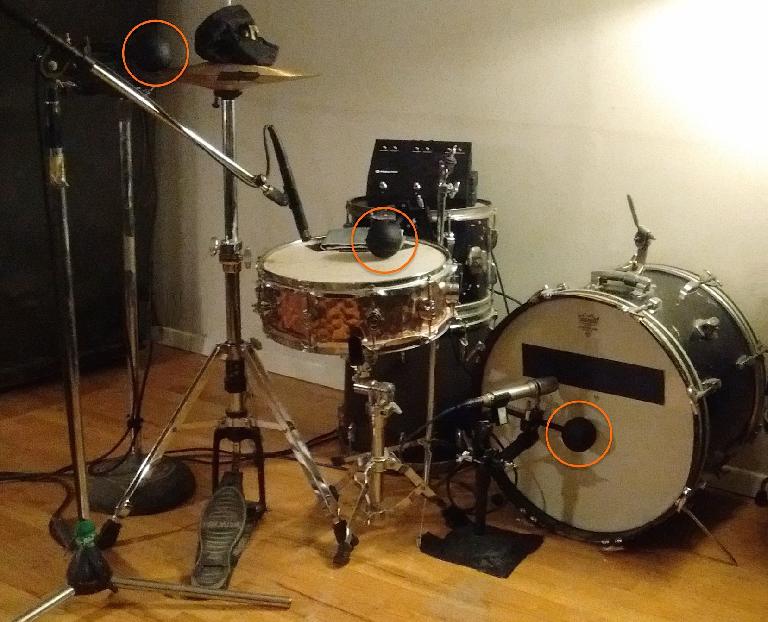 As you can see from the pictures, I used a couple of lightweight stands, but I’d recommend using heavier-duty hardware, and possibly taping it down as well—the light stands did tend to move when the beaters struck, enough to throw them out of position, until I taped them down. The beaters need to be positioned carefully, at just the right distance from the surface of the drum or cymbal, to allow for the optimal throw—this will insure proper response in terms of both speed and dynamics.

Triggering the system live, by tapping out parts on the keyboard, felt comfortable—I wasn’t bothered by any latency, and it felt natural to play through the PERC PRO in real time. Of course, triggering sequenced parts worked as expected.

I recorded a few simple drum parts real time, and then played those back while recording the acoustic drums. Once again, timing seemed right on. More importantly, the PERC PRO hardware tracked the parts I played very well, including smaller gestures like flams and simulated drags & rolls (which I do by mapping several keys to the correct drum note and then rolling my fingers over them).

To get a sense of how PERC PRO handled superhuman drum parts, I sped up a couple of the MIDI parts I’d recorded considerably—PERC PRO tracked these artificially enhanced parts perfectly, providing an appropriately mechanical musical gesture, but still with the natural sound of real drums (apparently, as a mechanical protection, PERC PRO scales down the velocity of very fast (>800 BPM) parts, but this actually makes such super-fast passages sound more natural).

Audio Example 2—A couple of the above MIDI parts, with the Tempo sped up, to test PERC PRO’s speed response:

On the subject of Velocity response, PERC PRO does properly track the Velocity of the incoming trigger signals; however, the dynamic range is not as wide as the dynamic variation a live drummer might employ. But it is enough to clearly articulate accents and builds, providing you’ve positioned the beaters at the optimal distance, as I noted above.

All in all, in my brief tests, PERC PRO acquitted itself well, and on top of that, it was a hell of a lot of fun to set up and play around with!

Polyend’s PERC PRO is an innovative product that works well, and turns the usual in-the-box trend on its head, with excellent results. While it is undoubtedly a niche item, for those who can envision its potential for creative use, I think it could be a very welcome addition to their arsenals of music-making tools.

Discount: Get $90 discount for a limited time by signing up to the Polyend newsletter on Facebook here: https://www.facebook.com/madeinpolyend/app/100265896690345/