Language
Plogue tasked themselves with bringing back to life the classic machine speech synths from many a popular electronic toy from childhoods now past. Noah Pred discovers a unique and playable instrument.

With the rise of Autotune and the popularity of vocoder effects, electronically-enhanced vocals are a fixture in the landscape of popular music—but they still require a human to at least utter the lyrical content. What if we could make the computer do all the work? Anyone who grew up testing the limits of a Texas Instruments Speak'n'Spell can likely relate to the childish exhilaration of forcing the hapless machine to reproduce any inane phrase typed into it. Now what if it could sing a melody of your design as well? Plogue's dedicated research team has developed an ode to the classic speech synthesis tools of the past, bringing them into the future as a versatile musical instrument called Chipspeech.

To begin with, Chipspeech comes enabled with seven Voices: Bert Gotrax, based on the Votrax SC-01; Dandy 704, modelled on the IBM 704 chip; Dee Klatt, built from Stephen Hawking's DECtalk device; Lady Parsec, developed from a TI-99/4A module; Otto Mozer, a version of the TSI; Spencer AL2, a tribute to the SP0256-AL2 voice chip; and Terminal 99, another model based on the TI-99/4A.

Each voice has a distinct tone and formant characteristic based on the type of synthesis of the original chip: analog, waveguide, cascading poles, segment sequencing, or lattice. They also come equipped with a different anime-style “character” image that serves both to convey some temperament of the sound, and to easily remind you which patch you're using. There are also three circuit-bent models on offer: SP0, TMS, and TSI.

The master controls in the upper section of the GUI allow you to store and select snapshot presets of the entire device (including lyrics, parameters, and selected voice), adjust pitch bend controls and master volume, and switch between monophonic to polyphonic playback modes. Phoneme Speed controls how quickly the transitions between vowels take place without changing the overall playback speed, while Wave Rate changes how fast the entire voice plays back.

In the Words pane of the interface, you can type up to 128 lines of text using alphabetic or Japanese characters typed in from your computer keyboard. Chipspeech will automatically play each line in sequence from one to the next, moving from syllable to syllable with every new MIDI note triggered.

For added control, you can opt to loop whichever line of text is currently selected and switch to another line via MIDI CC automation supported in almost any DAW—it worked just fine in Ableton Live.

The Move Up and Move Down buttons can be used to rearrange the placement of the currently selected line of text, and there's a handy Undo button to correct ill-fated clicks. Copy and Paste All buttons allow you to copy the entire text to and from the clipboard.

The tricky part is getting your syllables to line up with your melodies: with each syllable being triggered by the next MIDI note, you may have to play around with your note timing and placement to get everything coming out lined up just right. 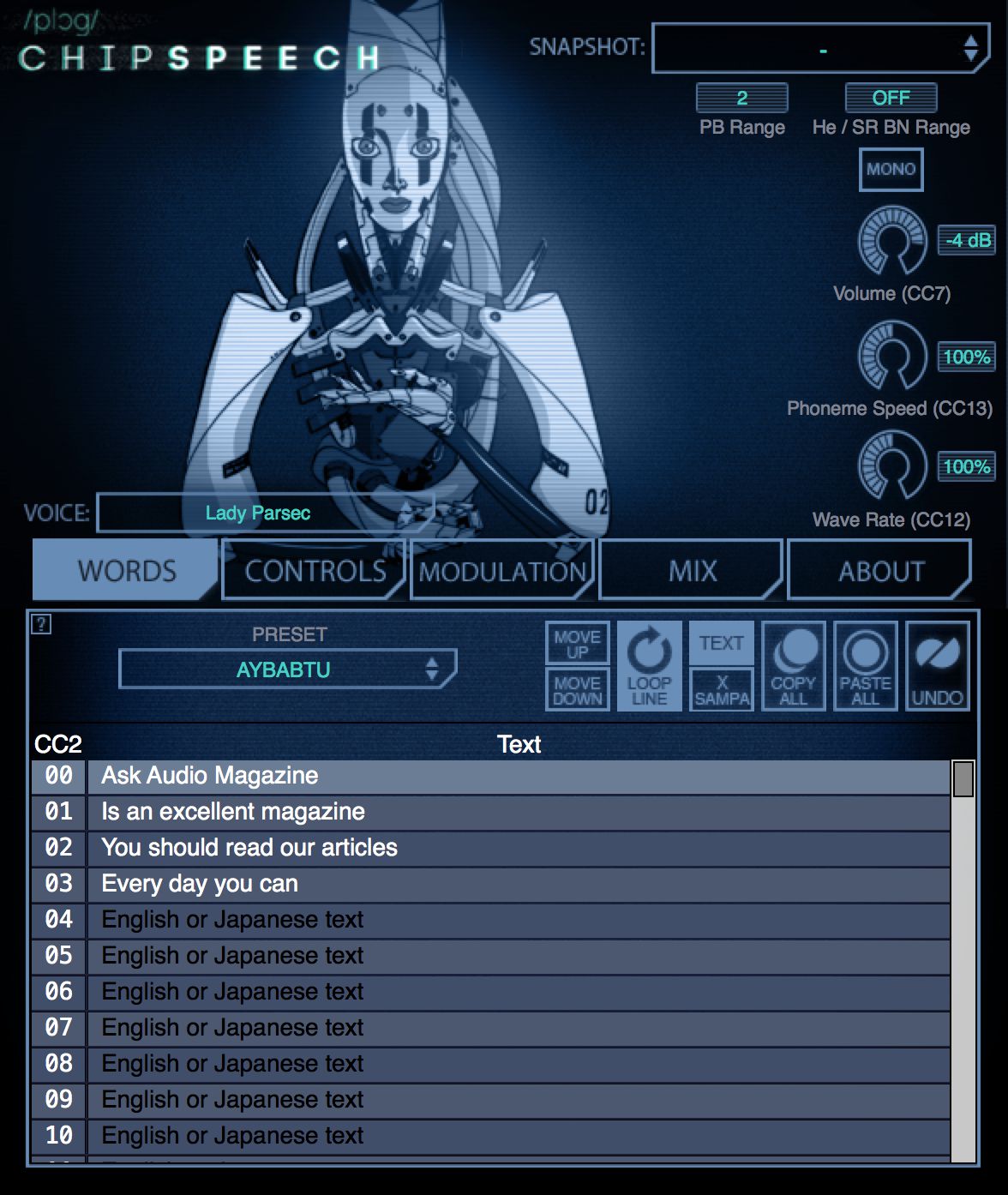 Lady Parsec about to sing some cheeky lyrics.

When using one of the Circuit Bending models, Data and Loop editing areas appear where the lyrics would be using a Voice model. Depending which model you're using, you get a selection of phoneme banks to start from, and an automate-able Selected Entry dial which pulls a different phoneme (or word sound) from the bank; twisting this control can result in some very unique digital scratch-like effects. Beneath this, you can adjust loop start point and length, as well as toggle looping on and off, to generate chaotic circuit-bent sound design.

Chipspeech's Control tab provides access to intuitive and potent tonal settings. Helium controls the formant sweep, corresponding to how wide the mouth is, resulting in powerful expressive filtration. The Fem Factor adjusts the gender of the voice, with 0% lending itself to more masculine sounds and higher values increasing the amount of sonic estrogen. Depending on the model, HF Sizzle brightens the top end through a few different methods, while the Breath control introduces a corresponding amount of white noise.

The Impulse allows you to select from 12 different vocal cord simulations including Votrax2, CD2802, and a basic Square wave. Impulse Width controls the “stretch factor” of the Impulse waveform, and IDWK determines the degree to which the Impulse Width is affected by keyboard input, allowing you to scale the waveform as higher notes are played. Sibilance attenuates the impact of noisy consonant sounds such as P, K or S.

Stack Density and Detune determine the amount of layered voices and their proportional detuning amount, respectively, while the Setup pane gives control of basic parameters such as Polyphony, Legato mode, release time and overall tuning. 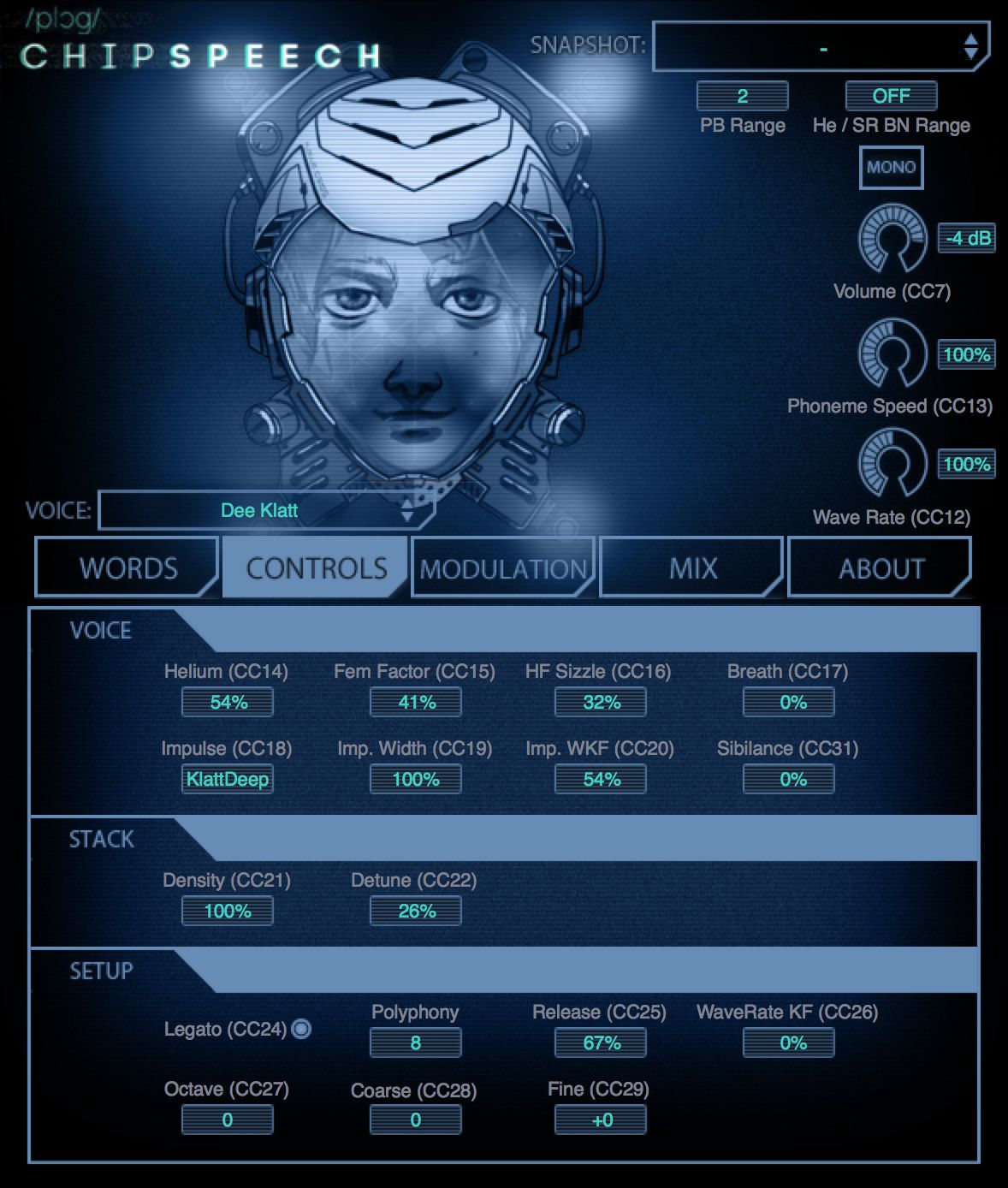 The Modulation pane gives access to a detailed Vibrato effect—essentially an LFO—that can be applied in varying amounts to the pitch, volume, overall tone, and helium parameters. It can also be delayed by an amount set here, while the Acceleration value determines how much the Vibrato increases in speed once activated—either via automation, or by a connected modulation wheel. The Expression section allows the volume and HF Sizzle amount to be controlled by mod wheel as well. Humanizing the Pitch and Volume amount can allow for some intriguing randomizations, while the Glide and Legato Glide amounts—particularly useful in Mono playback mode—can be accessed here as well.

A simple yet potent Detuned Chorus effect or an expansive Reverb can be selected in the mix section, giving a final touch of polish to the final output from Chipspeech. 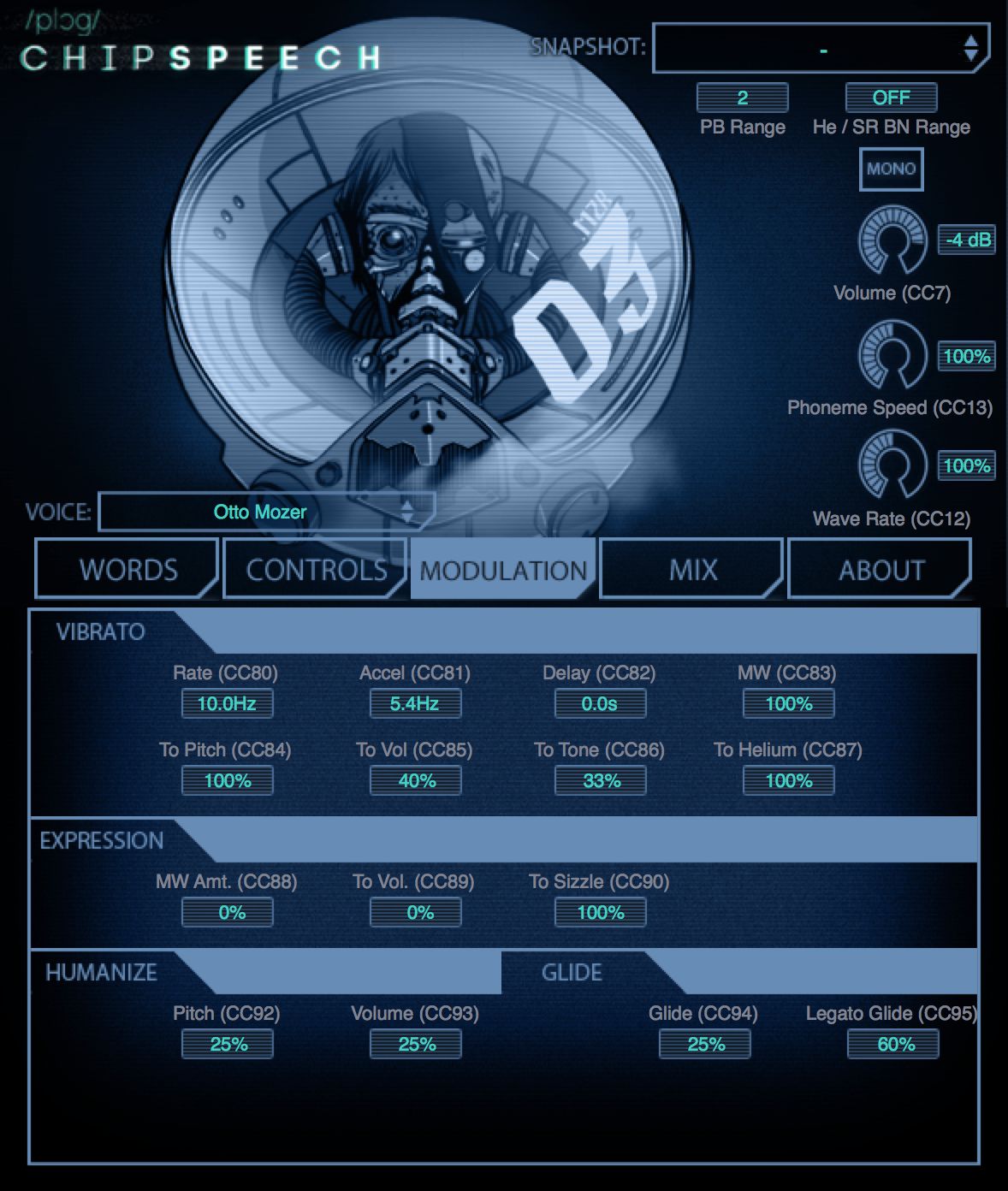 Otto Mozer set up for some modulation.

Every once in a while, an innovative plug-in comes along that actually provides a whole new perspective on instrumentality. With an intuitive interface, a selection of timbres, and the ability to push it in completely strange directions, Chipspeech could easily be used to make your computer sing—literally—or for all kinds of devious sound design applications. The potential that lurks beneath the surface of Chipspeech may just be a preview of what it could feel like to encounter actual artificial intelligence.

Lurch
The price is actually $95, not $75 as stated in the article. Also, there is a time limited demo. Definitely a fun plugin, but a little pricey for what you get. Just my opinion though.