This month I was spoiled with not just a module, but an entire synth to review. In this case it’s none other than the Microvolt 3900, a semi modular, tabletop analog synthesizer from Pittsburgh Modular. I gradually learned that the Microvolt defies simple description and comparison by offering a clever combination of familiar and novel features. So let’s take a look at what the Microvolt brings to the tabletop arena.

My first impression was that this little guy was like a mini Arp Odyssey module. And yes, aesthetically the signal flow diagram and use of sliders over knobs is similar. Plus, they both feature low pass filters along with ADSR and AD envelope generators, but beyond that the commonalities dwindle. Perhaps a closer comparison could be made to the Make Noise 0-Coast, as they are both tabletop semi modulars blending east coast and west coast synthesis approaches. However, the Microvolt has plenty of features that separate it from the 0-Coast to make it either a worthwhile alternative or companion. 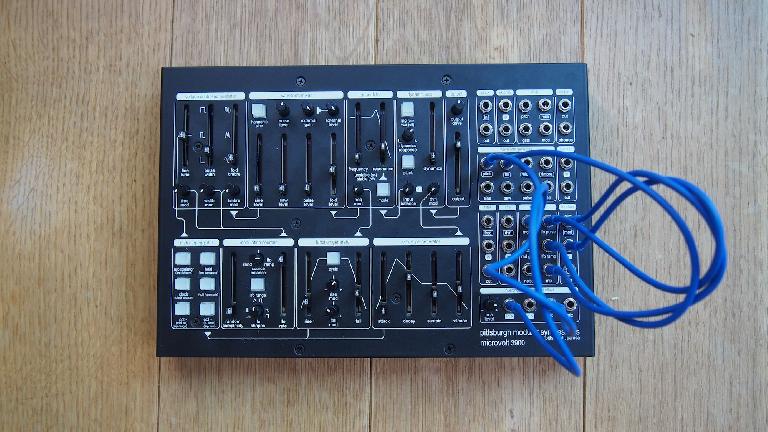 I’m not sure where the 3900 number comes from. A quick Google search brings up Cisco routers, a Queensland electric train engine, the Lego part number for a minifig wand thing, but most significantly, a type of subatomic particle made of quarks that was thought to be the first experimentally observed tetraquark. Since the Pittsburgh Modular guys are obviously space nerds, as evidenced by the inclusion of NASA trading cards and plastic spaceships with their products, my bet is on the last option.

The Microvolt feels way more substantial in person than I expected based on my initial sightings from its NAMM unveiling. In fact after handing it to a few friends, without fail they all expressed surprise at how heavy it is. The reason for this is a reassuringly solid metal enclosure with a classy dark wood panel adorning the front. Pittsburgh opted to take the same approach as the Moog Mother 32 by separating the patch bay from the rest of the controls, thus keeping the layout much more clean. With the Mother 32 because the patch bay is one solid section, I often found it easy to get lost in its grid of patch points. Thankfully the Microvolt divides the 39 jacks into relevant organized sections to streamline navigation. Patch points are labelled with outlines to indicate CV inputs and solid blocks for audio inputs. However there is one curious exception: The gate inputs for the envelope and function generators are labelled “in” with a solid background as if they were audio inputs. 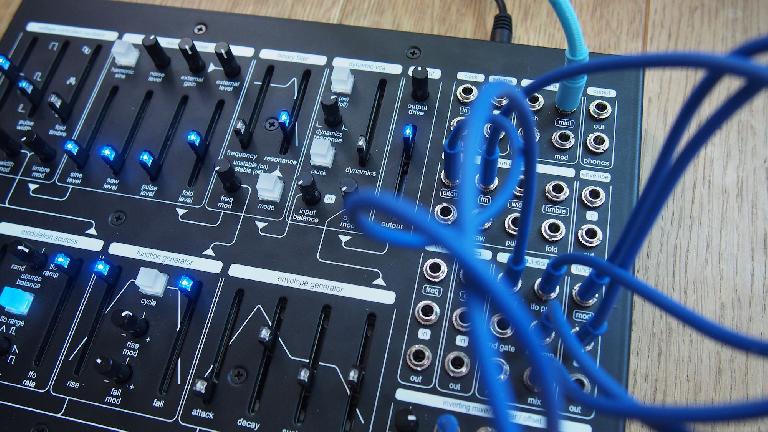 Also included in the patch bay is a clever multifunctional mixer similar to the one featured in the 0-Coast, with two inputs and two outputs. Input A has an attenuverter, but it is also normalled with a 5v signal. This means that with nothing plugged into input A, you can use the two mix outputs to send fixed voltages determined by the attenuverter position. This is a great way to create performance macros where you control a few parameters together with one knob. Alternatively you can blend two signals with attenuversion on one, or you can duplicate a signal.

The Microvolt is a single oscillator monosynth with a low pass filter. Four waveshapes of the oscillator can be blended together using sliders. There are the usual sine, saw, and pulse waves, but there is also a unique fold waveform. Fold can take on dramatic wavefolding character by manipulating the timbre slider and cv input. Additionally, the sine has an alternative mode called “harmonic sine” that can be toggled with a button. This option appears to thicken the complexity and richness of the pure tone by offsetting the symmetry and roundness of the sine wave.

Each of the waveforms has a separate output, and making a connection will remove the waveform from the mix sent to the filter. The sliders still control the level of the signal sent to the individual waveform output, which is useful if your destination does not have an attenuator. The waveform mixer section also features a knob to add white noise to the signal, as well as gain and level controls for the external input. This gives you the option of conveniently injecting line level signals into the Microvolt for all kinds of mangling, or overdriving internal signals.

Additional overdrive can be obtained through the Microvolt’s output drive control on the final output stage to push things even further. Just be aware that this will also increase the volume level, so you may want to ride the output slider or use a compressor to keep your levels steady. Furthermore, the manual also points out that the headphone output can be routed back into the external input to create a feedback loop. 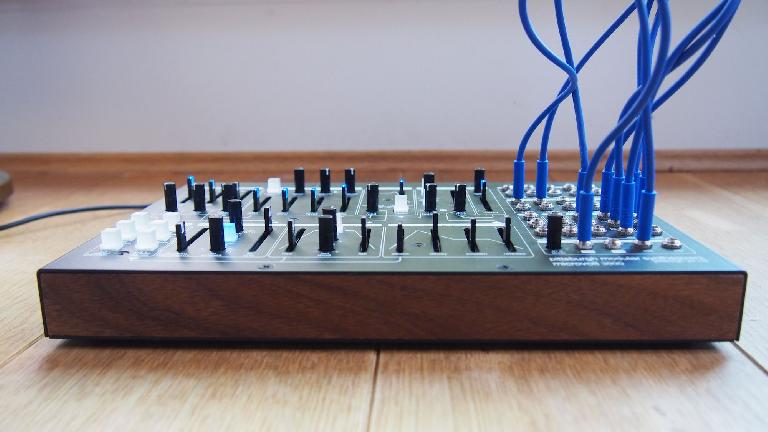 A basic sequence auditioning the various waveforms with drive applied towards the end.

A test of applying drive to a sine wave.

Experimenting with using the headphone output to create a feedback loop.

I call this: Motorcycle Drone.

The 12db low pass filter of the Microvolt is labelled as binary because it can be toggled between regular and “unstable” states. In its normal state, the filter is smooth with a pleasant liquid growl at high resonance levels, but no self oscillation. Toggling the filter into unstable mode engages self oscillation, and the tone of this will be greatly influenced by the level of the incoming signal along with any drive applied. Unstable mode also inverts the polarity of the resonance control. The idea is that this allows you to make a smooth continuous increase of the resonance by bringing the slider up, toggling into unstable mode, then bringing the slider down. Personally, I found this a little counterintuitive and confusing.

An additional filter mode is available through the VCA when low pass gate mode is engaged. This means that the VCA and filter open in tandem, so that louder sounds also have more high frequency content. This was a technique developed by Don Buchla to simulate the natural behaviour of instruments in the real world. To aid in the use of low pass gate mode there is a Pluck toggle that causes the VCA to create a trigger based on gates sent to the dynamics input.

A melody using the filter in self oscillating territory with drive applied.

Randomness with the low pass gate. 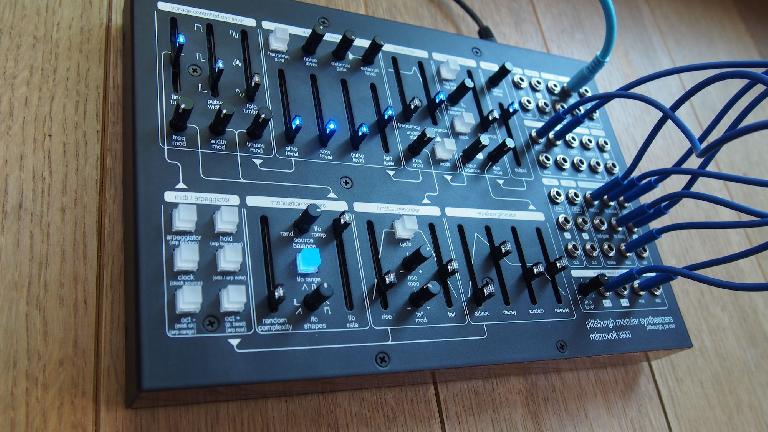 The bottom half of the Microvolt is dedicated to control and modulation. On the left is the MIDI and clock control center made up of six buttons. Here you can transpose the synth by octaves; set your clock source and division; and interact with an internal arpeggiator. The arpeggiator is quite a bit of fun, with some cool randomization settings and other modes under the hood. However, I found that the range of features accessed by those six buttons was greater than the visual feedback offered by their labels and lighting.

Having fun getting to know the arpeggiator.

Next to the MIDI/Arpeggiator section is the modulation sources section, made up of a random generator and an LFO. The Microvolt’s random source takes its inspiration from the Buchla Music Easel and takes the form of a six stage shift register. Shift registers work similarly to sample and hold, only in this case once a value is sampled it is passed down a chain. The random complexity slider determines the likelihood that the Microvolt will sample a value to replace it in the chain based on the timing of the chosen clock source. Because it is using six steps instead of a single sample and hold value, the randomness can take on a somewhat controllable amount of repetition.

The random complexity also determines the density of random gates fired. The LFO is fairly straightforward, with a toggle between two rate ranges along with a knob to affect the simultaneous pulse and ramp waveshapes which each have a dedicated output. These two modulation sources are sent via a mixer knob to the VCO section to control frequency modulation, pulse width, and wavefolder timbre. I would have liked to have CV control of the LFO rate, but this can be done with the function generator. It also would have been nice to have an input for the shift register to inject the values that it samples.

Does it Krell? I wanted to set try a Krell patch with the Microvolt and tried using the pulse wave output with the clock divider to set a chaotic fluctuating rate. 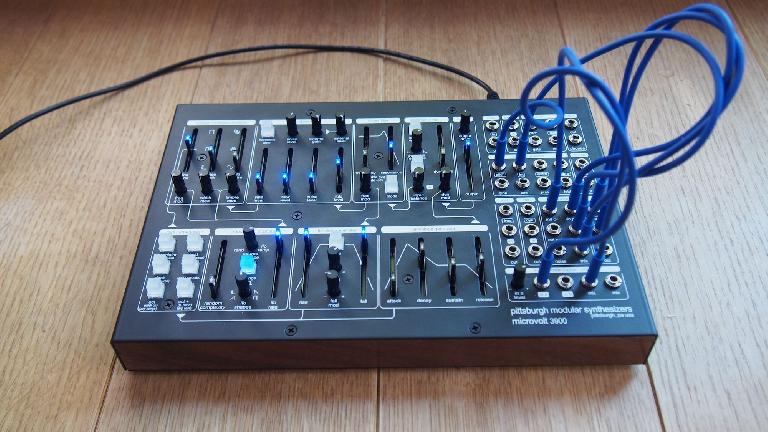 Creating a compact standalone synthesizer is by necessity an exercise in restraint, compromise, and creative solutions. Pittsburgh obviously put a lot of thought into the creation of this little powerhouse, both in what to include and what not to include. Using compact sliders and knobs dramatically increases the amount of controls and features they can include. At first glance I was worried that it would feel cheap or fiddly, but once I got my hands on it this proved not to be the case. Although, I think it would be wise to offer some kind of lid to protect the top surface. With a small synth like this, a lot of users will want to transport it, and unfortunately the box and included bubble wrap would not be an effective long term solution. Overall, I really enjoyed my spin with the Microvolt. It packs a ton of features into a tight but sturdy little package. It’s fun and intuitive to use considering the level of complexity, either on its own, with some kind of MIDI controller or with a larger modular system. It walks the line between east and west coast synthesis comfortably without being too vanilla or unapproachably weird. Whether you’re looking for your first entry into the world of modular synthesizers, or something new to complement an already crowded collection, the Microvolt measures up.

Filip
Hi there, i would like to ask does microvolt osc need to warm up before use?
thanks
Scott Riesterer
Sorry for the delayed reply!

I found that the tone of the synth definitely benefitted from a few minutes of warming up, but the pitch stability was generally fine. If you contact Pittsburgh directly they might be able to offer a more detailed answer.