Language
With Eurorack hardware more popular than ever, we got our hands on the Pittsburgh Modular Lifeforms Percussion Sequencer to see what unique features it brings to the table.

The Eurorack realm has no shortage of sequencer offerings, and for good reason. They can generate the pulse that drives an entire system, bring a patch to life with modulation, provide the rhythmic foundation to support your patch, or whatever else you can conceive. Because they are so critical to so many systems, and because there is such a diverse range of approach, the market still does not seem saturated. However, I imagine it’s becoming increasingly difficult for manufacturers to make sequencers that stand out by offering something unique and exciting. Pittsburgh Modular adeptly pulls this off by creating a relatively small, hugely functional, performance ready, four channel sequencer. 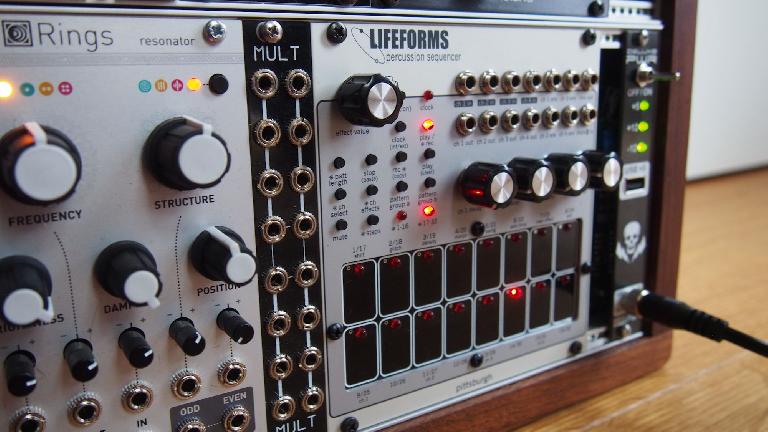 In the case of the Lifeforms Sequencer, the unique and exciting aspect begins with the four VCAs. The concept is that because modular systems are generally adept at producing noisy signals (both intentionally and unintentionally), why not shape that raw noise into percussion rhythms? Each channel of the LPS has both an input, output, and an envelope output with control over Decay. The envelope out can also work as a basic impulse similar to a kick drum. This arrangement offers a great deal of flexibility because you can rhythmically gate a noise source, trigger and sync with other modules, send percussive envelopes, generate kick tones, or any combination of the above from one place. Combine that with the ability to save 32 patterns and you have a powerful little sequencer indeed.

Kick from the Envelope Output

White noise with variation on the Decay

At a slim 24HP, the module is definitely on the smaller end of the spectrum and I was actually quite surprised when I opened the box at the diminutive form factor. Luckily, Pittsburgh Modular have come up with some innovative solutions to maximize functionality while conserving space. The layout of the unit is divided between the parameter buttons on the top left, CV I/O and Decay knobs top right, and sequencer pads across the bottom.

The parameter buttons provide your primary means of navigating the sequencer. They are fairly intuitive and I was able to dive in after just a quick glance at the manual. The Clock connection is both an input and output, and you select whether the sequencer will operate as a master or slave by pressing and holding the function button. If the LPS is the master the clock button works as a tap tempo, and if the LPS is slaving externally the clock button changes the clock division.

LPS as an impulse source for SMR

The unit has a main mix out, but using a channel’s individual output removes it from the main mix. This makes it easy to route the full mix out or process channels individually, with an elegant combination of options. Last month I had a look at the Befaco Crush Delay and they were kind enough to let me keep it for another month so I could try it out with the LPS. As I suspected, the crunchy, evolving washes of feedback ably produced by the Crush served as perfect source material for the percussive VCAs of the LPS. Similarly white noise with a slow resonant feedback sweep was quite effective.

The envelope out can function as a basic kick drum sound, and works great to trigger filters or resonator modules like Mutable Instruments Rings or the Spectral Multiband Resonator from 4MS. Running simple or complex noise sources into the four VCAs for percussion sequencing is a lot of fun and immediately rewarding. While this can easily be accomplished with any combination of VCA, Envelope and Sequencer, the LPS makes it remarkably quick and easy to accomplish. Most importantly, it makes it fun, easy to control, and allows room for happy accidents with a variety of effects. 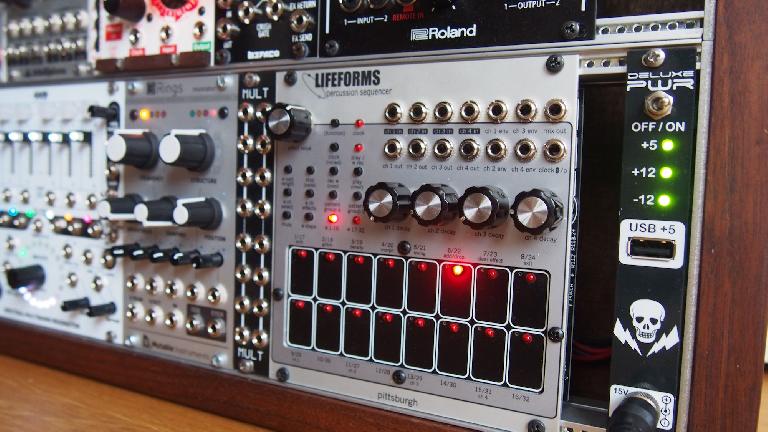 The sequencer offers something unique and exciting.

The LPS boasts six pattern effects: Shift, Glitch, Density, Morph, Swing and Add/Drop. Shift delays the trigger by a division of the tempo ranging from 1/8th to 7/8ths of a beat. Glitch adds chaotic but tempo synched gates. Density controls the number and timing of triggers for each active step, ranging from doubling to rolling patterns.

Here you can hear the Density effect applied to White Noise with a resonant filter sweep.

Morph is a probability-based algorithm that modifies the existing pattern by adding or removing active steps. Add/Drop is similar to Morph in that it adds or drops steps, but in this case the changes are temporary rather than compounded so the pattern stays anchored to the original. The familiar Swing effect adds “Feel” by shifting the timing of every other step.

The amount of each effect is dialed in with the Effect Value knob at the top left. You can apply one effect to each channel and also have one master effect, meaning for example that you can have independent swing amounts per channel, a global swing amount, or a global swing amount with individual offsets. I liked Morph and Add/Drop in particular because they spiced up my patterns with more variety, making shorter patterns feel longer. It’s also worth mentioning that you can easily set different lengths for the patterns of each channel so you can get polyrhythmic.

Getting polyrhythmic with the SMR

All things considered, I think Pittsburgh Modular struck a great balance between size and functionality. Arguably they could have used smaller knobs and pads, but that surely would have detracted from the satisfyingly solid build quality and the enjoyable tactile experience that comes from using this module. The Lifeforms is clearly designed with live performance in mind, and if it was any smaller it would be too crowded and finicky to use competently in a live setting. However, it could potentially benefit from an expander or breakout unit to increase the channel count, add CV modulation to the Decay rates, reset one or more patterns, or add a dedicated clock divider output. 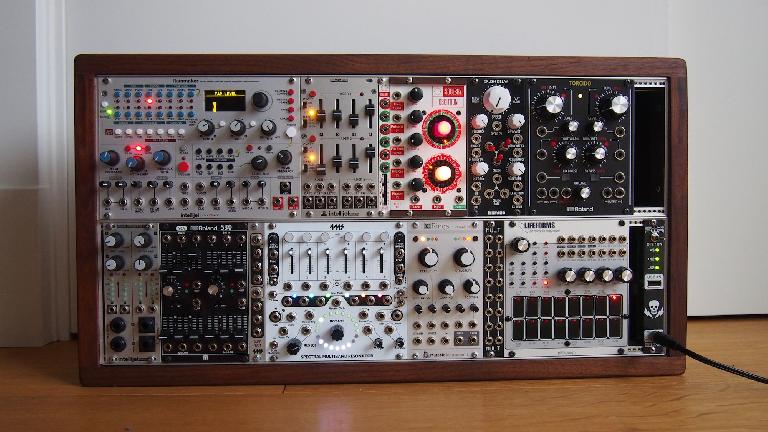 While creating the Lifeforms Percussion Sequencer, Richard Nicol wanted to make a drum machine that was part of a modular system, and not just something that interacted with one. I think he’s pulled this off effectively with a useful and fun module, but it’s worth mentioning that it can be much more than a drum machine since those percussion triggers can launch whatever tones you choose. Of course this is why we love modular systems: a module is never merely what the description tells you.

Getting spacey with envelopes triggering Rings through Rainmaker

Pros: Tons of functionality in a small package. Fun to use. Intuitive and solidly built. Six effects that can be applied per channel and globally. Polyrhythmic. Save up to 32 patterns.

Cons: Only 4 channels of sequencing. No control of Decay rates. No attack control.