Pioneer's new SQUID sequencer connects up every part of your studio from computer to Eurorack and beyond. In out exclusive video review, Rishabh Rajan shows you exactly what it can do.

Standalone hardware sequencers are slowly making a comeback. Pioneer have stepped into the game with the all new TORAIZ SQUID. Let's see what this multitrack sequencer is capable of.

The SQUID is purely a sequencer. If you are familiar with the TORAIZ SP-16 sampler, it was a sampler with sequencing capabilities. The SQUID focuses just on sequencing, though certainly does it quite well. It has a 16 track sequencer, where each track can have up to 64 different patterns. You can also create pattern sets to sequence a series of patterns. It runs off of USB bus power but does come with a power brick that makes the LEDs brighter and can run independently without a computer.

The sequencer has a lot of direct control buttons, and alternate controls via holding down the shift button and tapping those same buttons. There's not too much menu diving required. The 4x4 grid RGB pads are smaller than the AKAI pads but bigger than the Novation Launchpad ones. The pads have velocity sensitivity and feel great but do show fingerprint smudges quite easily.

The I/O is quite impressive on this sequencer. You get 2 DIN MIDI ports, 2 CV/Gate ports, 1 clock in/out, 1 USB MIDI and 2 DIN sync ports for syncing external hardware. The USB MIDI port doesn’t double up the DIN ports, it's an actual separate port that can be addressed independently from the hardware. 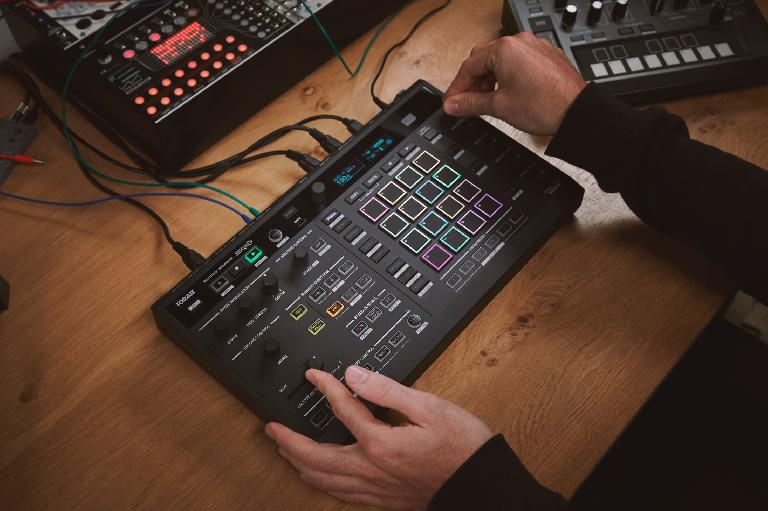 Pioneer has done a fantastic job with the sequencing engine on the SQUID. You definitely can’t get everything from the software DAW sequencing world but its quite a capable standalone sequencer.  There is a step sequencing mode that’s fairly straightforward and the unique thing about this mode is that each step can have up to 8 notes. So if your synthesizer is polyphonic, you can create chord pattern sequences.

Then there’s a scale mode that gives you access to performing and recording in real time. You can set specific scales, engage the arpeggiator while recording or even switch to a chord mode to access preset collections of chords that will be triggered on individual pads. There’s a harmonizer option with 6 customizable real time harmony options. Just tap one of the harmonizer buttons and hear that specific harmony.

Probably my favorite features on the SQUID relate to all of its timing manipulation features. You can create a straightforward pattern and then totally transform the rhythm with just a few clicks. Individual patterns can be set to odd number steps to create interesting polyrhythmic patterns. Each pattern can be set to playback at double, half or 1.5 times the original rate.

Patterns can be offset to start from a different step aside from step one. There’s an entire section on the hardware dedicated to playback direction that lets you manipulate the way the steps are traversed through in the pattern. If you have used the Make Noise Rene sequencer, some of these modes will look familiar. There’s a global swing amount and a groove bend feature that lets you push or pull the feel of a particular pattern, just like how a real drummer might play a bit laid back or rushed. 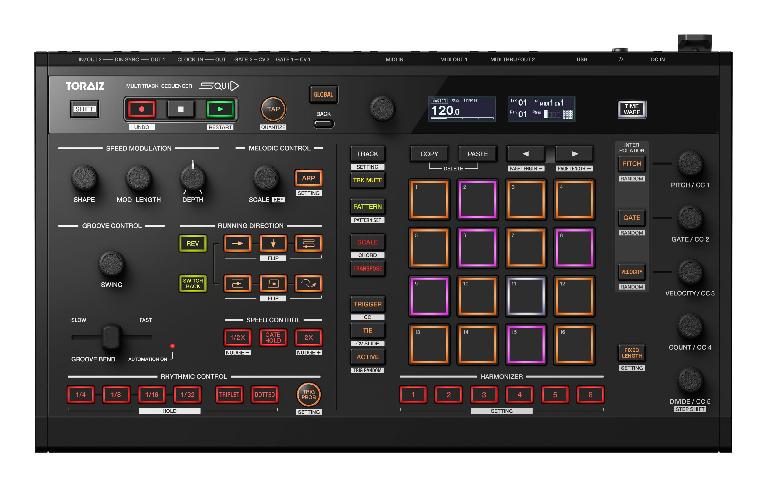 With Time Warp you can go back in time and replay any patterns or sequences of patterns that you may have performed. The SQUID is always recording all the performance information internally so this makes it easy to ‘recover' performances.

If you have never used a hardware sequencer, the whole process can seem a bit intimidating. It's not as straightforward as firing up a DAW in your computer and mousing around to create music. But if the idea of working with a hardware sequencer and embracing the nature of hardware sequencing intrigues you, the SQUID is a great choice. If you are looking to perform music live and step away from a computer, a sequencer like the SQIUD would be an ideal option.

Since this is just a sequencer, you have to incorporate sound modules, drum machines and synthesizers. There are some hardware sequencers that have in-build sound capabilities; with the SQUID you don’t, instead you get a fairly deep sequencer with a lot of real time control. So if you’re in the market for a hardware sequencer or maybe want to find a way to integrate your existing synths and drum machines into a live performance set, the SQUID could be a great choice.

Cons: I noticed some issues with the Arpeggiator on the CV out, but nothing that can’t be addressed with a firmware update.

sELF
There are some features that make me wonder if this can beat my Squarp Pyramid sequencer...? Itâ€™s got some great features, but how good is it in song mode?