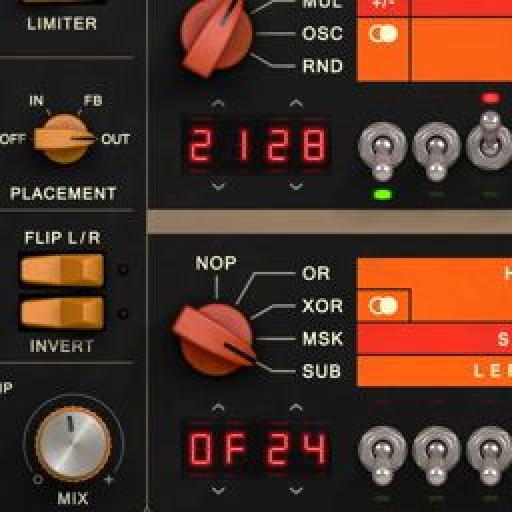 Language
The announcement of the Permut8 plug-in by Sonic Charge brought with it both adoring comments and head scratching. G.W. Childs gets to the core of this glitchy audio plug-in in this excellent review.

It is very, very rare that you run in to a plug-in that redefines your sound. Not just for me, for everyone.

One such plug-in, for many, was DB Glitch. Because the plug-in was relatively cheap, up until it became a freebie, and because it gave such instant gratification as soon as you'd run anything to it, regardless of the complexity you supplied it with. I used DB Glitch for a long time, up until I went totally Mac. Then, no more Glitch, it was just no longer an option.

Permut8 is no DB Glitch, and I'm not saying this to put it down. The reason I make the comparison is that this is the closest I've come to having a plug-in, again, completely redefine my sound.

Even Sonic Charge, the developers, do not supply a complete explanation of what Permut8 is, but I'll do my best. Permut8 is a delay, a filter, a limiter and several beat synced effects that behave differently depending on what 'Bits' are enabled in each 'Instruction' panel, and what tempo you're playing at. All in all, it's a Frankenstein.

It also excels at making anything sound very gritty, and 'different' with 12-Bit D/A, A/D conversion with a Variable Clock Frequency of 0 to 352 Khz. 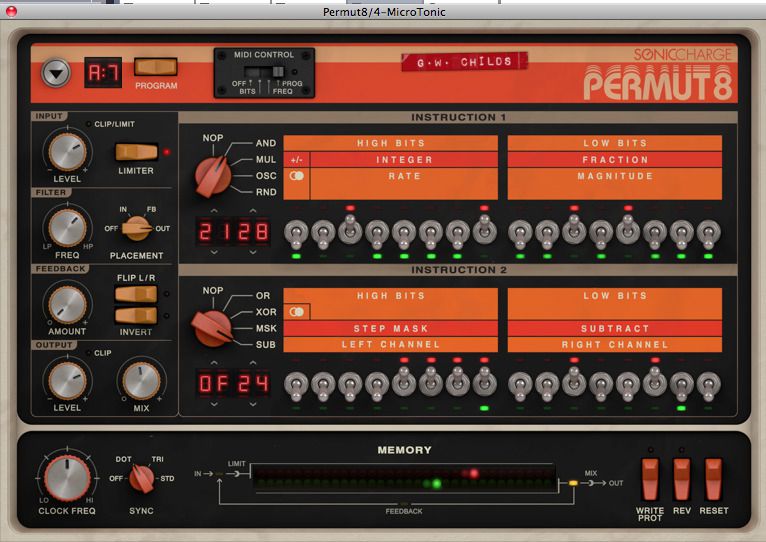 Well, that's the best question, so far! It sounds amazing! I'll take a simple drum beat like this...

As you can hear, the results are more than apparent. There are so many effects laying in wait to be discovered in this sandbox of sound.

How Easy is it to Work With?

It should be noted that because the interface is so cryptic, and vintage 'techie' that it can be a little intimidating off the bat. Personally, I've grown to greatly appreciate the return to the 'just push a button and see what happens' approach that Permut8 inspires. And with the 80's style graphics, it does take you back a couple of decades mentally, while at the same time remaining modern with its 'circuit bent' sound. That's an experience I'll happily pay for!

Technically though, with its hexadecimal leanings, you really can get as deep as you like behind the mindset and theory that Permut8 is based on. In this way, it really does have something for the right brained, and left brained camps.

But, what really takes Permut8 over the edge is MIDI controllability.

Permut8 can also be MIDI controlled. In fact, it has several modes in which MIDI will do different things.

In Bit mode, MIDI keystrokes will toggle individual bits. Because bits play such a major role in how the Instruction sets work, simple keystrokes can have massive effects take place.

In Freq mode, you have the ability to transpose the effects playback speed. This, in turn, causes Permut8 to become melodic, while at the same time giving you the possibility for the 'tape stop' effect when using your Pitch Bend.

Finally, in Prog mode, you can use your MIDI keys to switch between multiple effect programs. This is my favorite mode, as it makes Permut8 very similar to Stutter Edit and The Finger. You can tweak till your hearts content.

Honestly, this is some of the most fun I've had in ages, and it sounds amazing. The most amazing part is that the asking price, at $66 + VAT, for Permut8 is as cheap as its impact on your processor.

Like all Sonic Charge products, there is a demo version that only requires a code to unlock it as the full item. Therefore, you have no excuse not to check it out. I can assure you, within the first few minutes, you'll probably fall in love.