Language
If you haven't played around with reversed sounds, you've got some satisfying sonic fun coming your way! Hollin Jones puts Output beautifully crafted REV sample instrument to the test.

Reversing sounds is one of the most useful tricks I have ever used in producing music, whether it was the old reversed cymbal, or reversing textured sounds like guitars or synths to make them sound more interesting. Usually this involves getting to the point where you have an audio clip on the timeline then using your DAW to reverse it. Virtual instruments often have one or two 'reversed' patches in them, but rarely more than that. It was with great interest then that I received a copy of REV, a new sample-based instrument by equally new music company Output, made up of writers, musicians and producers, many of whom have very impressive lists of credits to their names.

The idea here is not just to create a bunch of reversed instruments but to make them musical and playable as well, something that can form the basis of a track or a score rather than just a musical embellishment. I'm pleased to say that it succeeds in this, but before we get to that, a bit about the nuts and bolts.

Like most sample-based instruments, REV is fairly large and in this case you have to use a special downloader app and paste in your code to start the download. This is split into multiple files of around 1GB each and can be paused and restarted if necessary. One minor niggle is that the downloader app insists on downloading the content, unzipping and 'installing' it all at once. So if you want to move the content afterwards, say to an external hard drive, you have to do this manually. It runs in Kontakt Player 5.3 or higher, the full or free versions, and you can add its library and authorize it via NI's Service Center as usual. The content folder is a shade under 7 GB, which is par for the course these days. Computer-wise you'll want OS X 10.7, Windows 7 or higher and 4 GB RAM for a smooth ride.

REV comes with four separate engines, all based around a similar interface so once you have found your way around, everything should make sense. It's well laid out and the learning curve is fairly gentle so beginners need not be afraid. The first engine is Instruments, which contains 500 presets split across multiple styles and types. These range from fundamentals like piano or string sounds through pulses, swells, complex pads and aggressive tempo-based sounds. Each section has multiple sub-patches so there's plenty to be getting on with. As usual with Kontakt, the onscreen keyboard uses color coding to show you which keys are assigned to which sounds or which are triggers to switch various effects and other controls on or off. 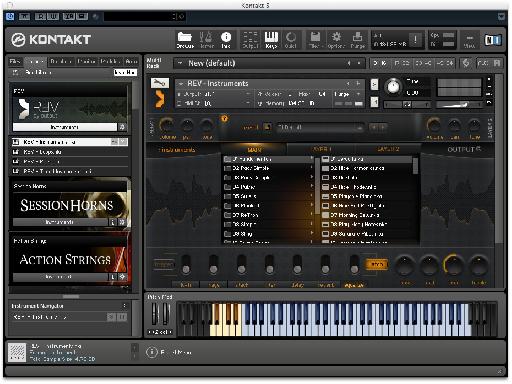 The interface is well laid out and it has its own preset navigation system.

Each sound is made up of two layers and each layer has its own control section, both identical. You can quickly turn a layer on or off or change its sample start setting to affect the length of the notes. Additionally, there's a comprehensive sound tweaking section available for both layers. You get stutter, filter and envelope controls, all with a tempo sync option which make it easy to modify sounds. Along the base is a row of effects which can be turned on or off, with a contextual control area for effect tweaking. 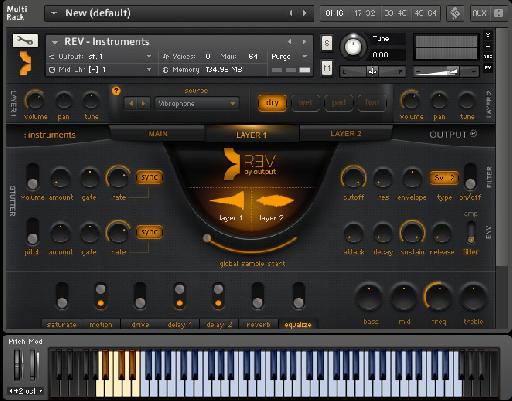 Use the layer sections to tweak the behavior of different effects as well as the way the sound is generated.

Along the top is a global control bar with layer volume, pan and tune controls as well as the option to use any of four sources for any given layer : Wet and Dry meaning with or without effects, Pad which means a sound is looped to create a pad effect, and Fwd which plays the sound in a regular forward direction. So between all these potential controls you can easily modify and shape the sounds to your liking.

The second engine is Loops, with 15 banks of tempo-synced loops all recorded live as original sounds. As well as access to all the effects you will find a half / normal / double speed control which makes it easy to quickly set the rate of a loop to make it fit more appropriately into your project. 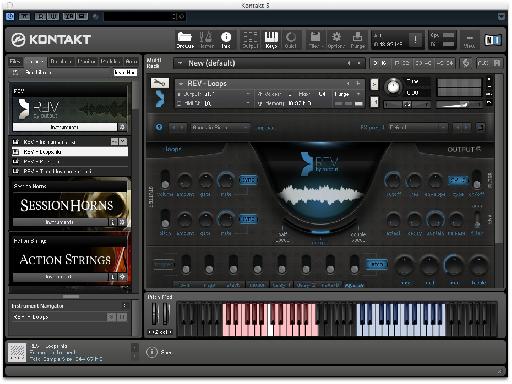 Tempo synced loops are great for soundtracks and electronic music.

Next up is Rises, hundreds of stuttering, pitch shifting sounds that can be used to punctuate and embellish changes in pieces of music. You can set the length of a rise, whether you want a tail or an abrupt ending and with a little tweaking you have a rise that times out perfectly.

Last but not least is Timed Instruments. This is similar to the regular instruments except that the length of sounds is set by a note length control, it's not set freely. So for example you can set the slider to half notes and all patches will play a half note in the tempo of your DAW. These are useful for ensuring that however you play your notes will always obey a length setting relevant to the current project tempo. 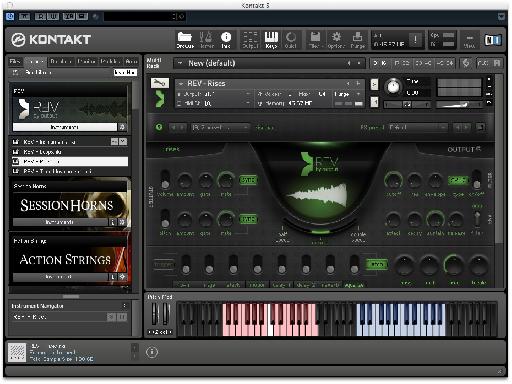 Rises are a good trick for punctuating tracks.

I was really impressed by REV and the quality and musicality of its sounds. It is so much more than just a load of reversed instruments : it's amazing for sound design. You can tell when you play it that some of the people involved in its creation have worked on major movie scores because it has that same ethereal, cinematic quality. So many synths on the market have a lot of uninspiring presets and then you watch a movie with a great score and wonder where those sounds come from. Well, at least some of them will probably be coming from REV from now on.

Would you build a whole album out of reversed sounds? Well, maybe, but it would get old pretty fast. REV's strength lies in its versatility to complement other kinds of instruments and make your productions as a whole much more interesting. If you are making a score or some other kind of soundtrack, you could very well use REV as your main instrument. Between the excellent bundled patches and the ease with which you can tweak to create your own edits, it's a fantastic addition to almost any musical setup.

Pros: Excellent and high quality sounds for a wide range of genres and soundtracks. Easy to tweak and well laid-out, a refreshing and genuinely useful new sonic palette for your music setup.