If you've ever lusted after the exquisite analog sounds that are now firmly back in fashion on TV and in the movies, Output's latest might be just what you're looking for.

The dreamy sound of the 80s synth still resounds, thanks to hit shows and movies like Stranger Things and recent bad ass series, Fox’s Legion. Noticing a hole in the current market for old synths mixed with million dollar orchestral sessions, Output has returned with a 20 GB sample volume designed to help you get both your orchestral and your synth arsenal eligible for a trip to the Grid, and possibly a few more gigs doing scores, trailers and even dreamy synth pop. Does Analog Strings succeed? Let’s find out!

Patience is a Virtue…

There’s no way around the bear of a download that comes from a 20GB sample library. It’s even more frustrating when you think you are only downloading supposed analog synth pads. As any basic synth can pull this sound off. Even the free plugs out there can have you bouncing out a decent, modern synth arp, almost perfect for television, and what’s going on in the center stage of pop appeal. 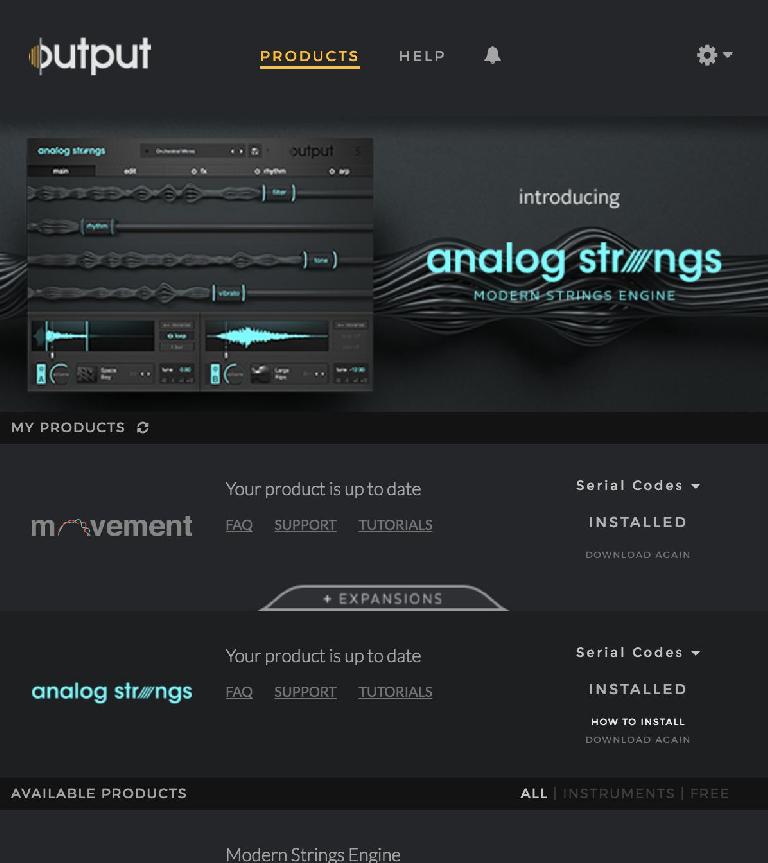 The Output Hub slowly guarantees a successful transfer to my drive.

Starting in the morning and finally finishing my download some time in the late evening, I expected to be bombarded with a bunch of PWM pads with thick choruses, being modulated in some cool, Output way. Sitting down, I was instead soothed by some gorgeous orchestral recordings, cleverly modulated, cleverly wrapped and lovingly executed. But more than anything else, It has the sound of my current pop culture. 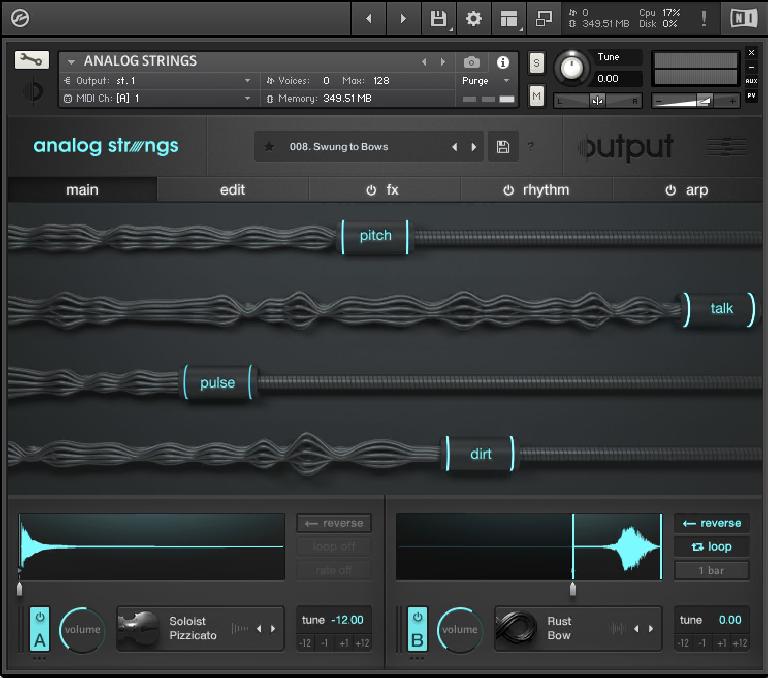 Laden with patches that give no small gentle nudge within their titles to their sci-fi sources of inspiration, a composer with even half a heart for nostalgia will be smiling. Stranger Things, Blade Runner and Tron references abound and make it very easy to summon moods often talked about but rarely achieved. While many have access to thick, little synths, these days, few have access to a full string quartet, a tape machine or a Mellotron. Even fewer know how to record and engineer sessions that make all of the above sound like right now, right now. These aren’t just sad, melodramatic drones, effective for Vangelis, Sea Bee narrations. 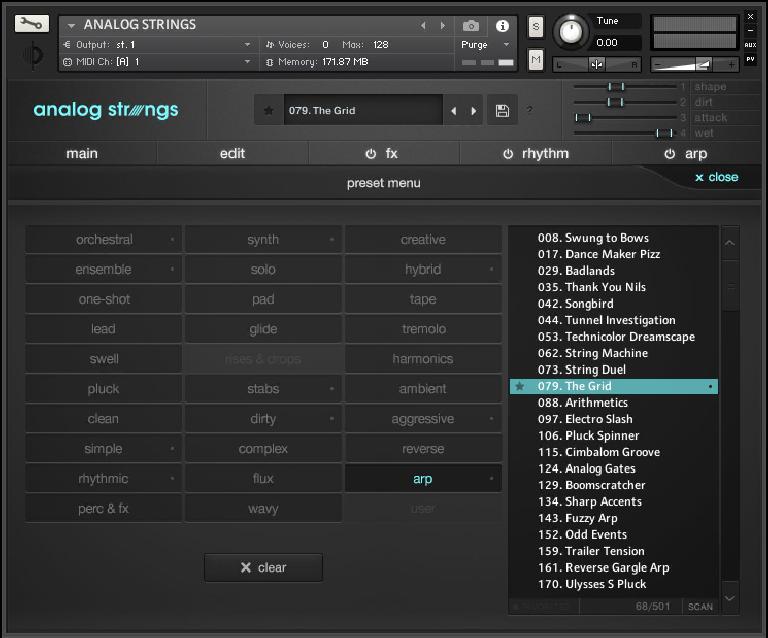 These are big money string riffs, melodies and rhythms that you will definitely have a hard time building on your own, outside of a very handsome budget. And even if you do, it won’t be this unique audio experience.

Is it Just Patches?

Analog Strings, while being sold as sort of a sample library, is actually an instrument in its own right. If you’ve ever worked with any of the old Roland JV series synths, you’ll know exactly what I mean. The patches may all be highly produced, highly engineered. But as a volume-complete, they become an instrument of distinct character, capable of adding a unique mood to a workflow and sound to a performance each time. 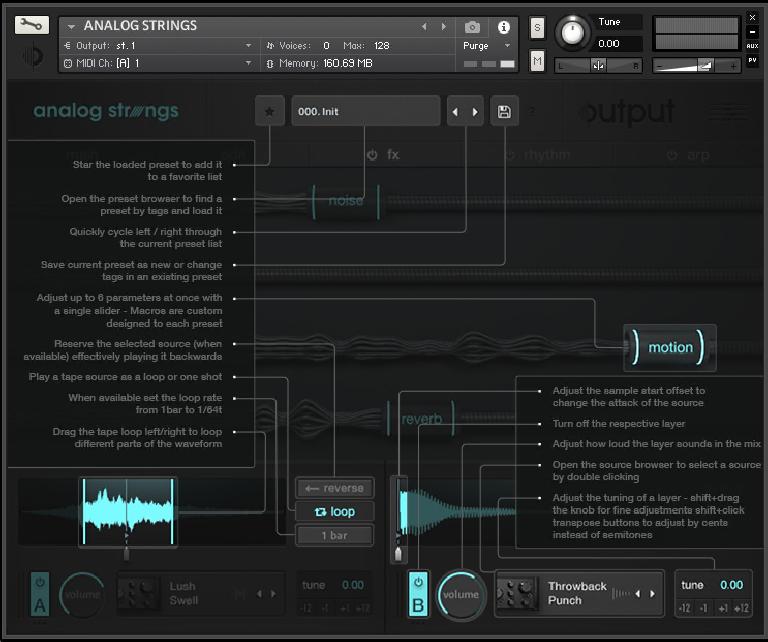 Within each patch, you’ll get a simple interface that at first glance centers around 4 gorgeous macro controllers as well as a set of tools and FX  that will easily help you customize your patches. 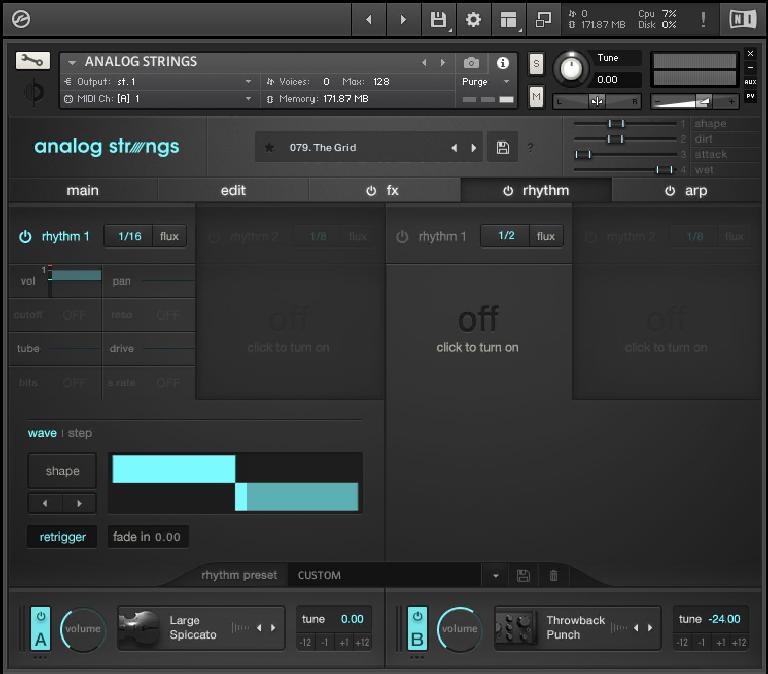 This, however, is where I got a little frustrated at times. Pinwheels occurred periodically from minor changes to the internal arpeggiator. And like the download times, at first, even loading up Analog Strings takes more than the average bear. So it goes without saying that running Analog Strings off of a secondary computer is going to be critical, for regular and long-term use. But, there are patches in there that are so good, I don’t mind spending a couple of minutes bouncing down to audio tracks to free up resources.  Because of the additional effects and tools like the Arpeggiator, Rhythm (Modulator) and a fully programmable effects section, each patch is an audio assurance that this won’t be just another download, taking up space, getting an occasional bit of usage. You can spend an hour with one patch, easily, tweaking the large amount of gorgeous sounds coming out.

As I mentioned, Output gives you many tools within the custom interface of Analog Strings. I was particularly impressed with the Source Menus for Layer A and Layer B. Output made it easy for anyone to mix and match instruments within their patches, in a way that I’ve really only seen Apple do it, using GarageBand as my example. All of the sources are broken down into clever categories that make it easy to find what you’re looking for. There’s no digging through directories, everything is present in the interface. Not an easy accomplishment! 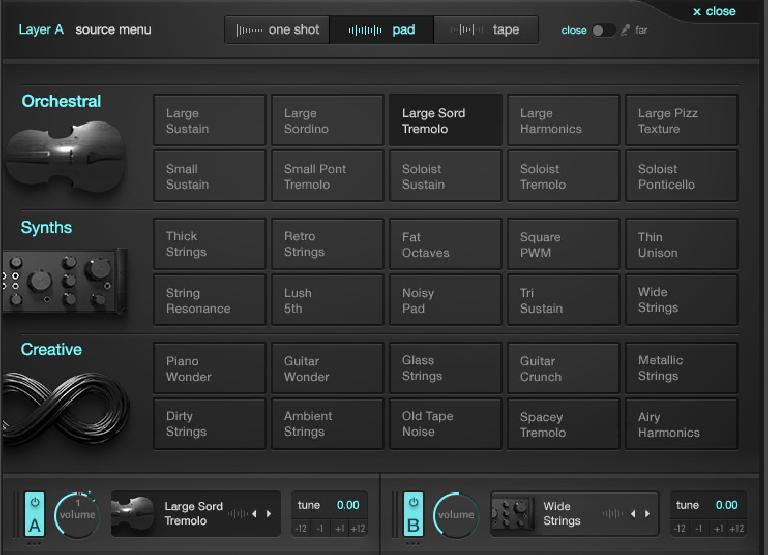 The FX section is just as imaginative in its execution as it is thoughtful. You have the ability to apply individual effects settings to each of the two layers using the Layer FX section, as well as apply blanket effects for the entire patch using the Global FX section. I particularly appreciated the Compressor/Limiter built in to the Global FX section, as it really helps keep some of the giant patches that reside within this volume easily reined in.

I also loved Motion within the FX section, which is a Phaser/Chorus unit. Chorus and Phaser both can play a very big part in getting the thickness of a pad to come out. But beyond the expected Fattening up, the Motion section carries two effects that very much resemble the sound and era they are trying to emulate, in that there is this ‘dreamy’ quality that comes out with very little effort. Once it’s out, you won’t find Chariots of Fire or St Elmo’s fire too difficult. 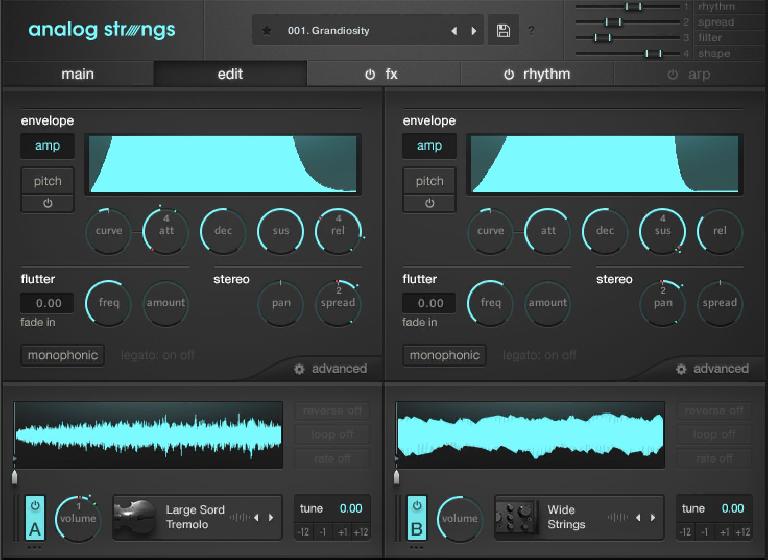 Also, the Edit section makes it easy for beginner or pro to feel comfortable in tweaking patches so that they have the timing and feel that the composer in question is looking for. Adjust the Amp Envelope and also adjust the Flux sequencer, which lets you assign and sequence different parameters available within Analog Strings like Pan, Volume, Filter Cutoff and Resonance. Paired with a truly powerful Arp, which is both programmable and filled with example patches of its own, you’ll begin to wonder why a volume called Analog Strings is so bouncy and aggressive! 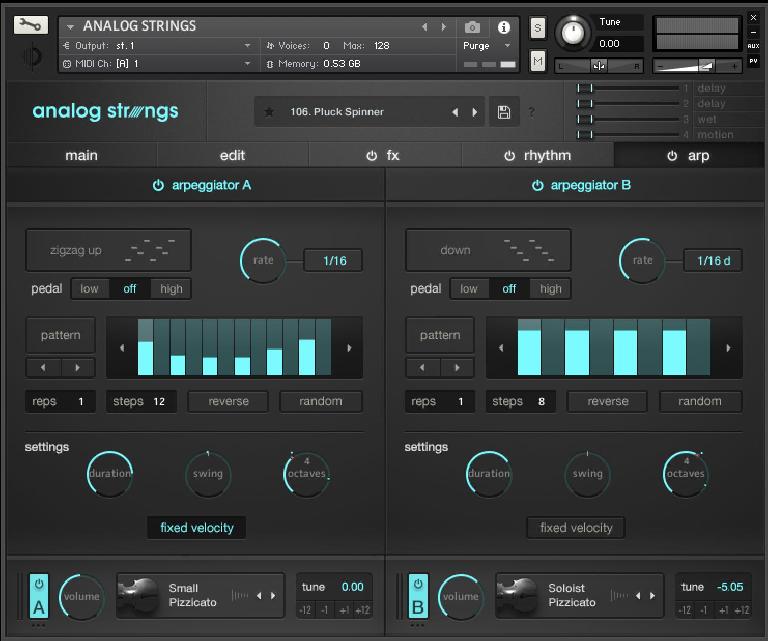 Analog Strings won me over with its cool, Tron-like appearance in the visual department. Especially the sweet graphical macros that almost look like electric lines powering and controlling the virtual unit hiding within Kontakt. It blew me away in terms of its gorgeous patch contribution. I do wish, and this also goes for Motion, that it’s wasn’t such a system hog at times. Long load times of the interface and waiting for some options to enable can get a little annoying. But the sound more than makes up for it. And updates come out all the time, optimizing volumes and patches alike. In the meantime, nothing out there sounds like Analog Strings. And nothing, as far as I know, will help you tap in to current dark, electronic, 80s dreaminess that is pulsing inside of all of these new TV shows.

Pros: An amazing instrument/sample library that captures the current, dark electro sound appearing in many TV shows and movies like Stranger Things, Blade Runner, and Tron 2.0. Output Hub makes it easy to download and manage the 20GB download. Beautiful sound!

Cons: Large download, a bit of a system hog, and the interface can become a little unresponsive sometimes.