Language
If you're looking for a capable iPad phrase looper that is Audiobus compatible and can be controlled via a MIDI controller, then Ostinator should be on your app shopping list. Watch the video demo!

If you’ve ever sat in on a performance with someone skilled at using a phrase looper, you’ll note that it can be a beautiful, improvisational experience. Well, of course, depending on the instrument being looped, I should add. While a violin soloist, who knows how to use a phrase looper can captivate a crowd, a dude with a drum machine, going through a phrase looper, can also get people moving and, grooving, with not much else. Living Memory recently released a new iPad app known as Ostinator that attempts to fill in for the classic, hardware loop pedal. Let’s see how close they have come! 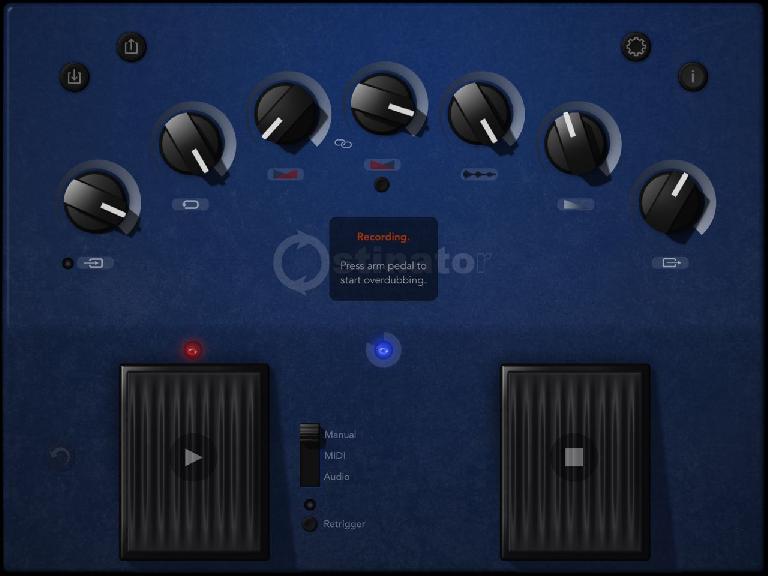 Watch this video demo of Ostinator in action:

Simple is As Simple Does...

Ostinator is presented just like you remember those beat up old devices, a few knobs, and a few pedals, and that’s really part of the charm of Ostinator. It rekindles the experimentation that a hardware loop pedal tends to inspire. The labels are very minimal, which I think gives it a bit of fun if you just like tweaking knobs and flying blind. Though, with a touch of the information button (I) on the right, a set of comprehensive labels appear to kind of walk you through a device that should be really simple. 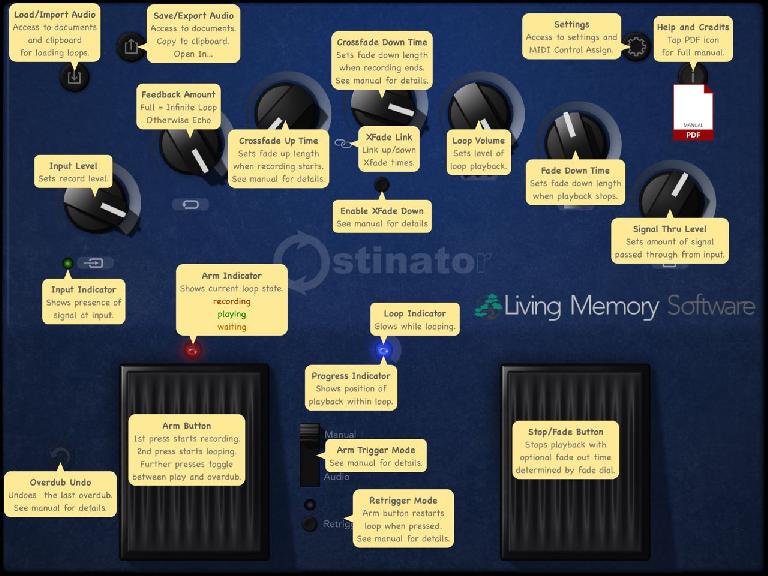 Ostinator is Audiobus, and Music IO compatible. So, I took it for a spin with both apps, in an attempt to not only rock out, but also an attempt to just see what it can really do.

There are two pedals that take center stage, when dealing with Ostinator. On the right, you’ll notice the plain, Record Pedal. Press this to begin recording your loop, and press again to begin immediately playing back what you recorded. Press again, and you begin overdubbing. There are different trigger modes—MIDI, for example allows a MIDI controller, perhaps with a physical, hardware pedal, to trigger the record/overdub pedal. The pedal to the left is the Fade pedal, which fades out, and in the current, loop buffer.

With Audiobus, Ostinator actually played pretty well, together. Though, there’s a momentary lapse, where Ostinator (in the Effects Slot) will for a moment play input from the internal mic, causing feedback. Within a second, or so, Audiobus routes the instrument input, and the feedback stops. I’m pretty sure that this is an Audiobus thing, but I'm not totally sure.

With Music IO, Ostinator worked really well, with the exception of a latency that seems to slowly creep up, even with a low buffer setting, such as 64, which should be lightning fast. Even with Music IO’s internal latency settings at their highest, I still ran into this occurrence.

Ostinator is also compatible with any app that uses Inter-App audio. Unfortunately, I didn’t have one of these apps to test with, but I’m assured by the developer that this is the best way to experience Ostinator, should you have an app that is compatible.

Ostinator looks and sound as good as any hardware loop/echo pedal that I’ve ever encountered in the past. But, with some extra MIDI, iOS, and, well, modern amenities, Ostinator is a mind-blowing must have, at a price that hurts my mind much more than my pocket book.

Pros: Sick, growing, immersive echoes and phrase looping, with all the features you’d expect and more.

Cons: Had a consistent crash with the Crossfade Down Time Knob, when using Audiobus. This is version 1.0 of Ostinator, however. So, just keep an eye on it, before you take it to a gig.