Language
Casey Edwards, the creator of Oracle, is best known for composing music for games like Killer Instinct 1 and Killer Instinct 2. Now you can get hold of his epic sounds in Oracle.

If you're doing video game, film, or even commercial composition, 'Epic', in terms of scope, texture and all around sound, are essential. Recently, I was allowed to review a sound library, known as Oracle, from a musician/composer known as Casey Edwards that is no stranger to 'Epic', having composed for games like Killer Instinct 1 & Killer Instinct 2. How did he do? Read on!

The Oracle Has Something to Say...

I'm going to level with you, I get irritated when I read descriptions about libraries that claim lush, atmospheric and the buzzword from earlier, 'Epic'. Thankfully, I was spared the irritation of false marketing here. It's all lush, atmospheric and 'Epic'. The pads that Casey supplied in Oracle (always the first thing I look at) are haunting, rich and clear, and with very little effort can evoke dark, or even a heavenly feeling. And, if you're a fan of mega synths like Nexus, that offer quick modulation tools like a step sequencer for gating, filtering and creating rhythmic effects from thick synth chords, I'm pleased to announce that Casey has included a sequencer that works very much the same, and is really easy to program. With that being said, I can easily say that this library's scope of use goes far beyond game and film scores. 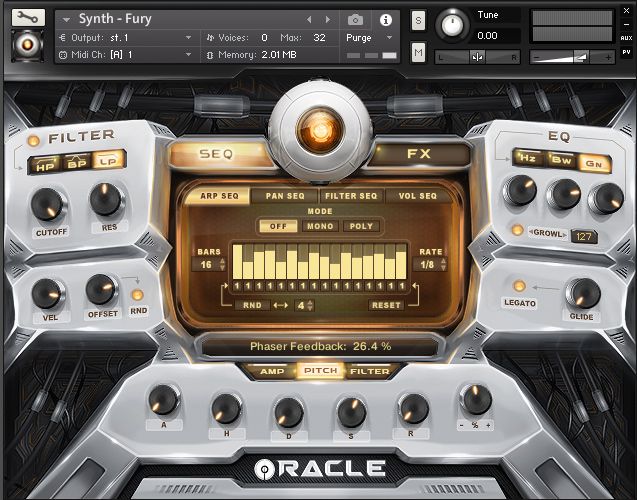 Sure, Oracle sports tons of amazing patches that recreate atmospheres, drones, and all the ambient sounds you'd expect. But, there are also some really fat synths in there, too. And, these synths can be tweaked in some really cool ways, beyond just the step sequencer. For example: Oracle also supports a very nice envelope that can be assigned to filter, amplitude and pitch. No special routing need take place, just select Pitch from the Bottom, for example, modify the attack, decay, release, etc., and then push up the percentage in Semitones of how drastic the envelope will be. Very simple.

It Looks So Good!

The graphical interface supplied with Oracle is stunning. It supports a futuristic look, with an aesthetic that is vaguely reminiscent of Killer Instinct... Nice! Small, black wires appear in the back, and coil around really cool panels that very much help the cause. The EQ Section is awesome. Casey has supplied the ability to control and modify Gain, Frequency and Bandwidth, which actually really does give a great amount of flexibility in modifying any of the supplied patches with new characteristics, tone and overall sound. And, when you enable Growl, things can get really interesting.

Oracle also sports a mighty fine filter, and a really elaborate effects section. Effects like Chorus, Phaser, LoFi, and more are easily accessed and enabled. However, it's the Reverb that really needs some attention here. Casey has given us the ability to use Oracle's Reverb as both an insert and a send effect. This is extremely cool, because Oracle comes with a ton of Impulse Responses. 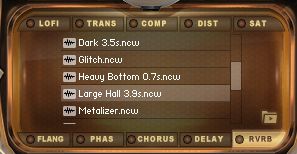 Oracle is a really polished piece of work. The look, the sounds and flexibility that have been supplied make this a library that can truly become a work horse set of tools. And, because the patches that have been included have been so carefully tailored to the feel and sound of both modern games, as well as modern electronic music, you can rest assured, this won't be a purchase that will sit there and collect dust. I would strongly encourage taking a look at Oracle for both composers and electronic musicians alike.