Language
There's lots of string libraries to choose from but not many include muted samples. Numerical Sounds Universal Sordino provides IRs for convolution reverbs to simulate the muted sound you're after.

Most of today's popular string libraries do not include recordings with mutes on, or sordino as is the commonly used term. Composers ranging from the great Bernard Herrmann to more contemporary composers like Thomas Newman use this sound to great effect. Many of the library developers get around this with a sordino script, with varying aesthetic results. This can also be dicey when you are working with multiple libraries trying to blend them.

Enter Numerical Sound with its new set of Timbral (Impulse) Responses that can be loaded into any convolution reverb that allows importation of IRs, including the one that is a feature of Kontakt.

You get a lot of TRs for both 48 k and 44.1 k for violins, violas, celli, and basses in three perspectives: stage, near, and far. Each group has four tonal variations ranging from Half Sordino, Bright, Normal, and Dark. And within those tone variations are four options for reducing the low end: Very Light, Light, Medium, and Full and Deep.

So as you can see there is quite a range of choices that you will want to spend some time exploring. Just to give you an idea, in Pic 1 you see the folders for the 48k TRs and in Pic 2, the contents of just the Half Sordinos in the Stage folder. 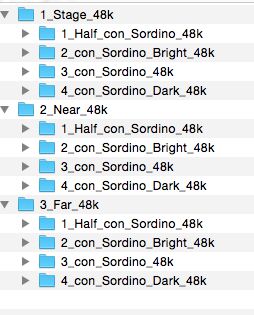 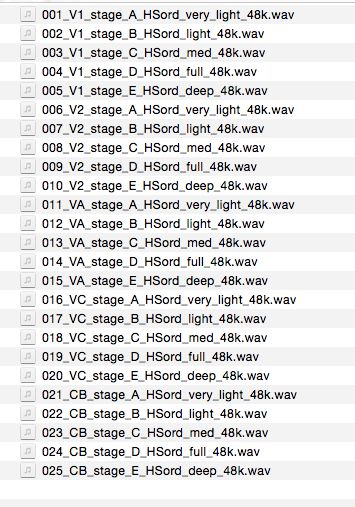 On their website are a number of examples of dry stems from a bunch of the libraries without mutes, with the scripts for mutes for those libraries that include that feature, and with the Universal Sordino impulses. I think the difference is considerable.

Rather than duplicate that, I am going to do this in Logic Pro X with just included content for the EXS24 sampler and the Space Designer convolution reverb.

Here is a little piece I whipped up using legato patches for the EXS24 with no reverb. The samples were recorded very dry so they are useful for this purpose, though clearly not on a par with the best string libraries available.

One of the nice features of Space Designer is that I can simply drag and drop the TR (or IRs) into the interface. What to choose? In this case since the samples sound to me to have been recorded with pretty close mics and I want to add some ethereal effect, I am going to the Far folder and choosing a deep brighter patch, at the suggestion of Ernest Cholakis, the man behind Numerical Sounds. Admittedly, this is just one personal choice and it will take you some time to figure out your favorites for different kinds of compositions.  See Pic 3.

To hear the effect, inside Space Designer I need to turn the reverb up to the maximum wetness and turn down the dry signal, as you see I have done in Pic 4. 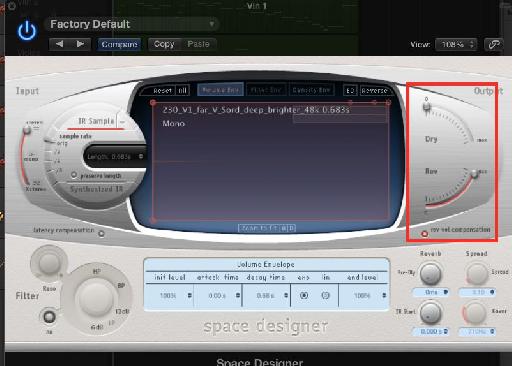 Listen to the 1st violin without and then with the sordino impulse in Audio examples 2 and 3.

I can then even dial some of the dry signal back in to get the balance I want. I also can send it to a little reverb as I have in audio example 4. For that reverb I am using one of the included Hollywood Sound IRs.

Now it is just a matter of repeating this process for the 2nd violins, violas, celli, and basses. Again at Ernest's suggestion, I used some lighter Timbral Responses for the celli and basses.

In audio example 5 is the final result. Even with the less than stellar samples if you listen to this and compare it to the audio example 1, you can hear I think that the sordino effect is being replicated well.