Language
Nasty surprises when streaming your own music could be a thing of the past thanks to MasterCheck Pro with advanced metering and realtime codec previewing.

NuGen Audio makes a wide range of specialist audio processing and analysis tools for mixing and mastering. An update to its MasterCheck plugin, this new Pro version adds some interesting new features but before we get to those, a little background on what this tool is for.

It’s a given that music and other digital audio like TV and movie sound is now distributed by and consumed on many hundreds of different platforms. Where once almost all music came on CD, now it might be streamed from Apple Music, Spotify, played on digital radio and so on. What is not always so well known is that each of these services uses its own compression settings and formats. Radio and TV stations have their own electronics that are used to perform all sorts of processing on sound before it is transmitted, whether it’s to make sound louder or quieter, more intelligble or less upfront.

While mastering has always been about getting music to sound good on any playback system, there have never been anywhere near as many different playback systems as there are now. It’s unrealistic to try to test out more than a few of them while mastering, since by definition, your music has to be broadcast before you can hear how it sounds. This is where MasterCheck Pro comes in. 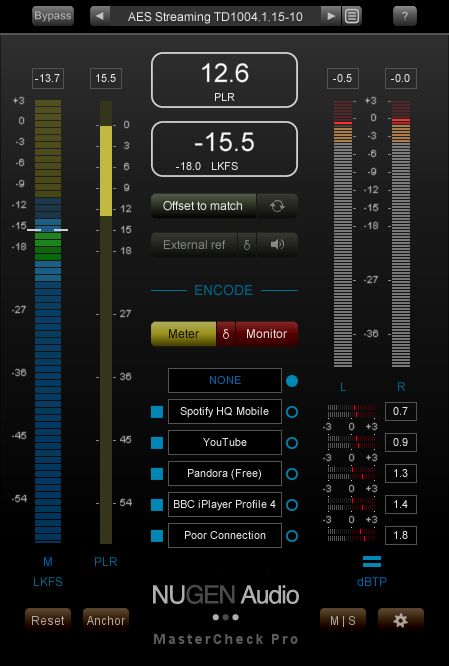 So what is it?

A plugin that is typically strapped across your master bus or mastering chain, MasterCheck Pro provides advanced analysis and simulation tools to let you preview how a mix is going to sound on multiple different services. The idea is that you then make a master for Spotify, one for BeatPort and so on. It achieves this by providing different kinds of audio meters which are calibrated to industry standards. This means you can measure your track’s loudness and dynamic range accurately and adjust it according to the requirements of the target media.

You also get True Peak Metering to ensure your material won’t clip at later encoding stages, and codec streaming simulation to let you literally hear how the compression codecs used by specific broadcasters like YouTube, the BBC, Pandora and others is going to affect your signal. It can even reveal if certain codecs are going to cause frequency masking or distortion problems later down the line. 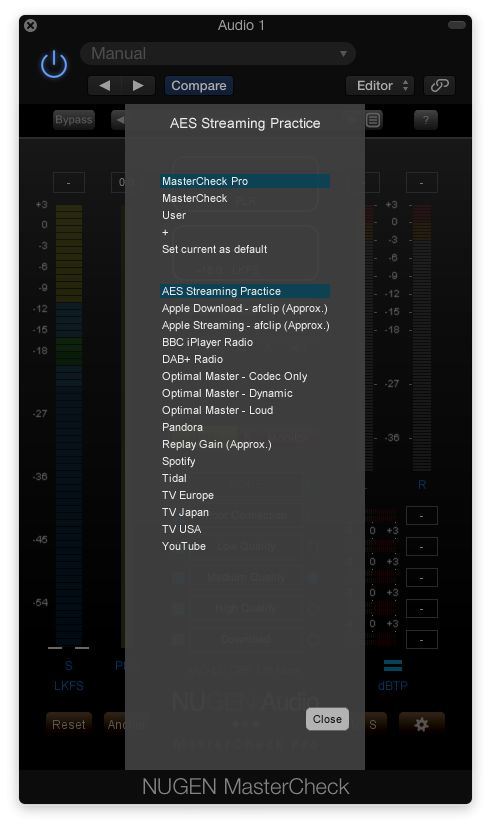 MasterCheck Pro is a relatively niche but important product for anyone who masters a lot. While it may be overkill for many bedroom producers (although the advanced metering is handy), if you actually produce a fair amount of music that ends up out in the world, it’s invaluable for attempting to compensate for processes that will take place after you have submitted your tracks.

Some streaming services seem to introduce very little noticable change to tracks in my experience, but other media, especially radio stations, can have a huge effect on the volume of your material. Technologies like live codec preview streaming have been around for a couple of years, but they’re still essential for anyone putting out music commercially in this digital age.