Language
The Launchpad became THE controller for Ableton Live. Now the Novation Launchpad Pro aims to become THE grid instrument for expressive performance in Live & other DAWs. Hollin Jones follows the lights

Novation has always been at the forefront of developing hardware controllers designed specifically to work with Ableton Live, and has arguably been a driving force in making Live one of the most performance-oriented DAWs available. The Launchpad has been around for a few years and gone through various iterations, and the latest is the daddy: the Launchpad Pro. With significant enhancements over the regular Launchpad, Novation reckons it’s the ultimate accessory for Live so I was keen to put it through its paces.

The hardware is reassuringly well-built with a rubberized underside to hold it firm on a surface, and cool-looking orange cables. (Why don’t more companies use varied colors for cables?). It powers over USB from a computer but also comes with a power supply which is optional when using with a computer but required when connecting to an iOS device using the Camera Connection Kit (which you would have to supply yourself). 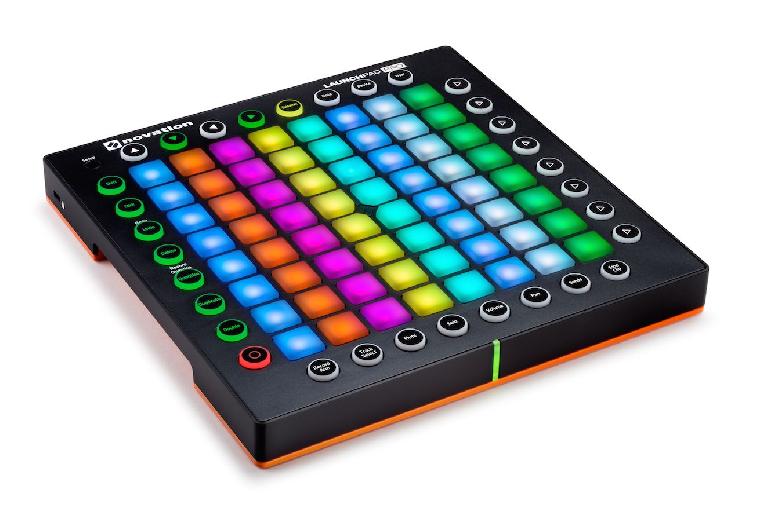 It comes with a copy of Ableton Live Lite and also naturally works with the full version of Live 9. Setup is pretty much nonexistent and once connected, you don’t even have to specify the device in Live’s preferences: it just seems to know it’s there. You can use it as a generic MIDI input device for your computer too. Mac users don’t need to install anything to enable this, though Windows users need the small driver installer. There are special mini MIDI in and out ports on the back, and you get two adaptor cables supplied, also in eye catching orange. The ability to incorporate hardware MIDI kit into your setup is a nice touch and extends the usefulness of the Launchpad Pro even further. 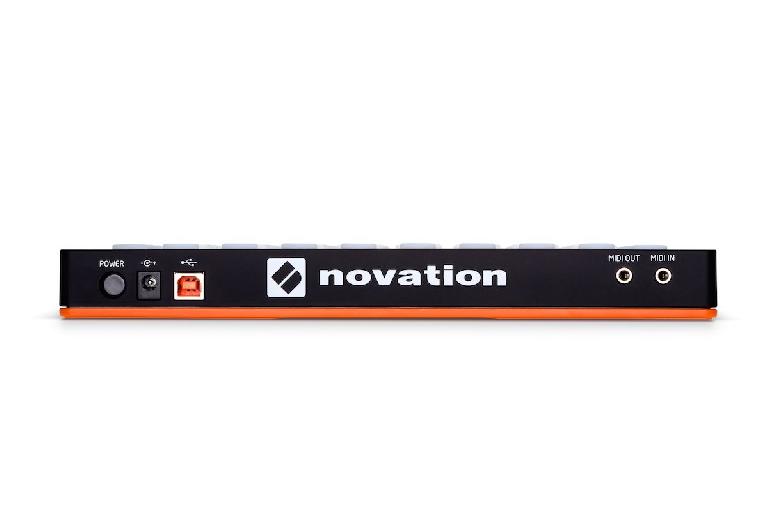 At its heart, the Pro has similar aims to its smaller sibling the Launchpad but as the name might suggest, it goes further. There are still the 64 RGB backlit pads, and although these still match the colors of your clips in Live for easy visual feedback, they are now velocity and pressure sensitive. So as well as triggering clips and actions, they can now be used for more expressive playing of beats, melodies and even chords. The color coding works really well, changing depending on whether you are playing a drum or an instrument device for example. In Note mode, the grid becomes a chromatic keyboard that is surprisingly familiar to play even though it is a very different technique to pressing a piano keyboard. This mode can also be used when triggering MIDI hardware or other software.

Novation claims that the extra rows of buttons around the outside edges of the Pro are fairly self explanatory and while you’ll still probably end up looking up a few commands in the manual while finding your way around, this is one of those rare times where that’s probably true. Having more physical controls means less reliance on shift+press to access sub-functions (though this is required on occasion) so a button’s label just does what it says. The color coding of the pads is invaluable here too, changing to show different modes and functions. You can navigate around a project using the arrow keys at the top and switch between Session, Note, Device and User modes too.

The right-hand side hosts the clip launch buttons and along the base are the track parameters, things like record arm, mute, solo, volume, pan and stop clip. The sensitivity of the pads comes in particularly useful for changing volume. Press the Volume button and tracks’ levels are shown using green pads of differing heights. A soft tap will cause a fader to move slowly to the new position. A hard tap makes it move more quickly, and this is an excellent way of achieving variable fader movements without having any actual faders. On the left side are programming and editing buttons including quantize, duplicate, delete, undo and a shift command for changing the functions of a couple of the buttons. 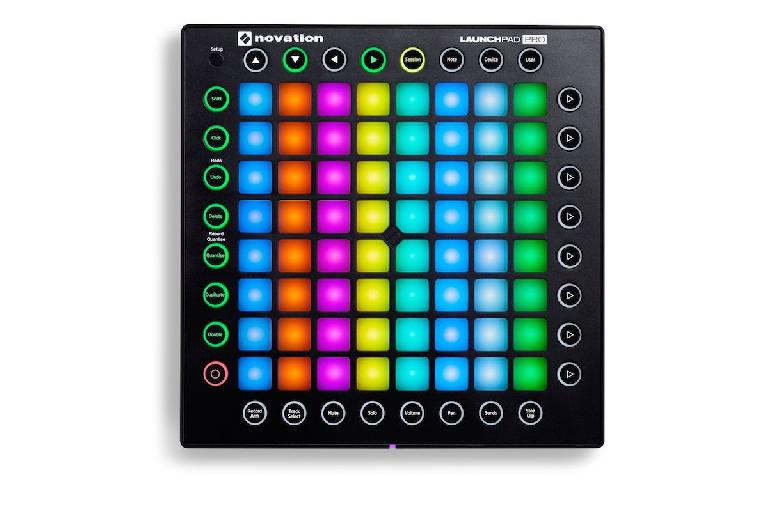 Don’t you just want to press something?

One of the nice things about using the Launchpad Pro is that many of its controls are available without fully switching modes. In the middle of a performance for example you could press and hold the mixer button then quickly adjust a couple of levels, and release the button to jump straight back into the main clip control mode. Similarly when programming parts, you can input MIDI really creatively by using the recording controls. Flip into Device mode and you can control your effects and plug-ins easily, and again leap straight back to performance. The workflow is excellent and all achieved without recourse to an LED or LCD screen thanks to the clever backlit pad system.

Even for a newcomer to the Live platform, the Launchpad Pro doesn’t take much learning. The added creativity that’s available to you thanks to the velocity and pressure sensitive pads plus the mixer and performance controls are both useful and fun. I honestly found myself barely looking at the computer screen when using the device, which is surely the aim of any DAW performance controller such as this. Obviously it doesn’t do everything and there are tasks for which you will have to turn back to the mouse, but this is in the words of Novation “an instrument designed for live performance” and not intended to be a complete replacement for traditional DAW control methods.

As well as Live Lite, you also get a Loopmasters sample collection and plug-in versions of the classic Bass Station and V-Station synths to help you get started. The Pro costs a little more than the regular Launchpad which won’t come as a surprise, but it’s genuinely a more rounded performance instrument thanks to its enhanced control and interaction features. If you plan on performing with Live in any capacity at all, you’d be hard pressed to find a better way to do it than connecting a Launchpad Pro and getting seriously hands-on with your music.

Cons: Really none if you’re an Ableton Live user.