Language
Has the latest update for Novation's Launchpad for iOS improved the overall experience of this mobile music station? G.W. Childs puts it to the test in our in-depth review.

If you're a fan of the Launchpad line of products from Novation or you really want to start making some music of your own and don't have a lot of money to go around, you really want to read on. Novation has recently launched the Launchpad App for iPad, and while it's a free music app, with some items for purchase, don't be quick to shrug this one off. It's really cool and let me tell you why.

Launchpad for iDevices is amazingly robust for a free app. Upon first launching and getting into the App, I was more than surprised by the amount of loops, effects and vocal samples already in there. What inspired me the most was just seeing the layouts that were put together for each of the different patches/styles available for use within something that costs nothing. Columns are neatly laid out that separate loops, main drums, bass, arps, and so on. And, because all the grid buttons have neat, readable labels, you're never really wondering what you're about to bring in. 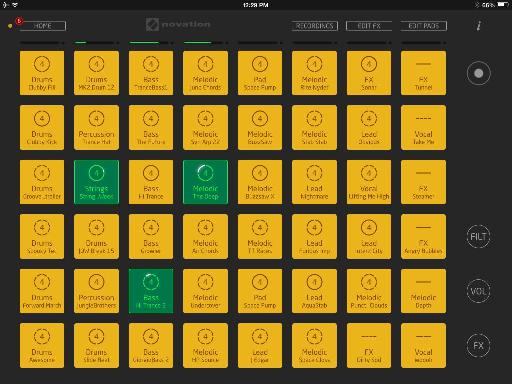 And, if you think you've built up an arrangement that's worthy for the ears of others, you'll be happy to know that you can record your arrangement, as you build it, and then export it out to an iPod, or your favorite DAW.

Of course, being able to trigger loops and record the progressions is only going to keep most people occupied for so long. This is where Launchpad really begins to step up and furnish you with some additional features that can really make things interesting. The Filter page supplies filters for not just one but for all loop columns within Launchpad. In this page, lowering the faders from the default middle setting will induce Low Pass Filtering, allowing you to remove unwanted higher frequencies from synths, or you can just use it for an effect. Conversely, you may also raise the fader up, from the middle position, wherein you will cause High Pass Filtering to take place. I really like the layout and sound of the filters. But, most of all, I like the ability to record my filter movements down to an audio file, once the record button is pressed. Though, sadly, there is no way to draw in filter curves, etc. Well, not without some upgrades. 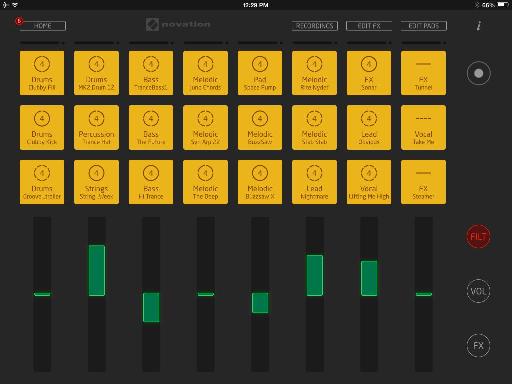 This is where things can get really interesting. Especially, if you don't mind throwing in a couple of bucks for some upgrades! Novation has effects available for sale, within Launchpad, that really up the ante. Since we're talking about filters, already, let's talk first about Autofilter, a really nice sounding, and editable Filter that includes a built-in LFO. When you go over to the FX Edit page, you'll find that you have more than a little bit of say in how your Autofilter, or any other purchased effect may work.

For example: You can switch Autofilter's filter type, LFO speed, and even the phase and amount. This, in turn, leads one to the ability to either introduce amazing filter sweeps with the touch of a button. Or, latch that filter and have it modulate a portion of your performance.

There is also the Stutter effect, which is one that I really enjoy working with, though there's really not much to edit. In fact, if you go into the edit page, by simply pressing your desired effect, within the Effects Edit page, you'll only be greeted with one big, yellow dial, which sets the length of your stutter. This sounds, at first, a little weak. But, when you hear Stutter in action'¦ Well, it does very well what the name inspires. And, with the quick, easy FX trigger buttons, as they are set up in Launchpad, it's so nice to have such an easy way to rhythmically trigger stutters with such ease.

Gater is probably my favorite, as I was one of those kids that used to always do rhythmic gating on my aunt's old analog car radio, with classical music and the volume knob. And, out of the current effects lineup, this is probably second runner up for most programmability. In the FX edit menu, Novation gives you access to the depth, speed and width of the cuts that Gater will be making. Do you want thick, hard cuts to make it sound hard and industrial. Or, do you want slight dropouts to augments a nice trancepad. It almost makes me sad, as I used to spend hours getting this effect. Now, my 6 year old nephew can get it for a few bucks. My analog MIDI gate cost me $100, back in the day!

I saved the Delay for last, as it is highly programmable and quite beautiful for an iDevice effect. Novation gives you Delay Time settings for the left and right channel, which is awesome, as this means that you can add some real complexity to basses, beats and so on, by having alternate, competing delay times in separate speakers. And, when you tie in the Delays built-in filter, and a very intuitive LFO by which to modulate the filter, you get a very intense delay'¦ Cheap!

Keep in mind, all of these effects can be used as master effects, or can be routed to individual tracks, through the FX edit menu. And, all the effects have tons of presets! You don't have to create them! But, if you want to, it's nice to see Novation include that option, on an iDevice, no less!

I was lucky to get to spend a lot of time with Launchpad, prior to writing this, and really had a good time with it. It's an easy, no frills, intuitive music station, for the iPad, that includes upgrades that really do add something! Plus, with the option to be able to bring in your own audio files, through the Import upgrade, you really could do an amazing set, just from your iPad, of your own music.