Language
Notetracks enables musicians, producers and composers to sketch out musical ideas on their iPad or iPhone and make notes on any imported audio file. Lynda Arnold finds out how useful it really is.

There’s often a need for musicians, producers and composers to take notes and sketch out aspects of the music they are working on. As we creative folk know, inspiration doesn’t always happen in front of the computer workstation. As with most iOS App technology, it’s larger purpose is portability and instant access to information, especially when it comes to music professionals logging their ideas. Alternatively, using the iPad or iPhone in conjunction with our DAW workflow gives us another screen to work with for using other instruments, incorporating effects, and now, note taking with Notetracks for iOS. Notetracks is a handy app for iPad and iPhone useful for taking a wide range of notes on any imported audio file. 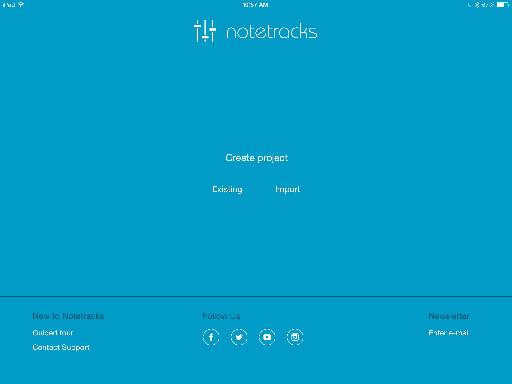 Setting up a Session and Importing

The main Notetracks window (shown above) is the place to create a project, open an existing project or import a project. You can also contact support and take a guided tour of the App before diving in. Import options for Notetracks include Dropbox, WiFi transfer and iTunes. WiFi transfer involves syncing with your home computer to transfer files to the iOS device and works great. I was able to sync my Dropbox folder with Notetracks and import a file within an existing session. You can import an iTunes file, which includes any song you have purchased or downloaded that is already on your device. The Demo session is a great way to discover how the App works.

There are three main tools for logging notes in Notetracks: Comments, Symbols and Drawings. 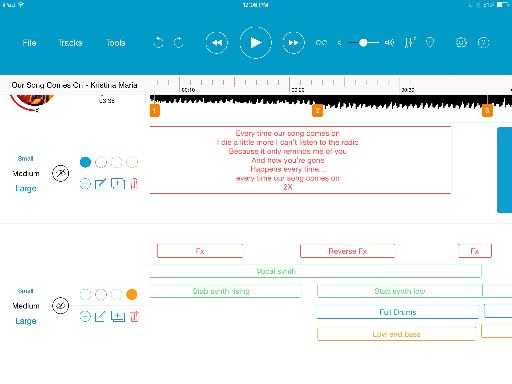 The Comments section allows you to write lyrics, take notes on certain sections and map out the arrangement of instrumentation with customized text boxes. You can color code them for better organization. In the demo session provided you can see this in action. I also like that there’s a separate section for lyrics and another comment section for instrumentation notes. 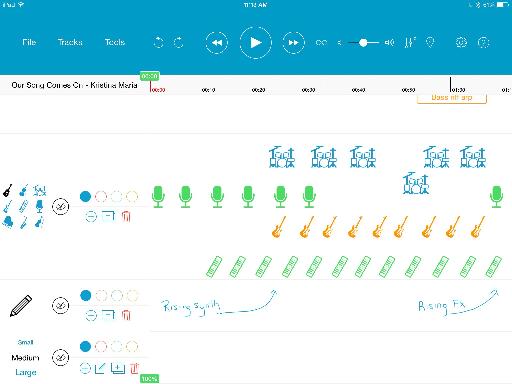 The Symbols section contains 9 typical instrument symbols used in musical arrangements. This is great for rock, folk or pop songs, but limited when working with audio that contains a full orchestra or exotic instruments. This should be sufficient though for most popular music arrangements, included EDM. I would use the comment box section to map out instrumentation personally, but other people may like this visual approach.

The Drawing section allows you to hand draw a note or picture into the timeline. In the demo session, this is used the indicate transition sounds like ‘Rising Synth’ or ‘Rising FX.’ The drawing box isn’t large. It’s ideal for small handwritten notes or pictures.

Markers are very important for organizing the location of the notes you take. It’s also important to have Markers for looping certain sections of the audio. They are easy to insert and move around.

In the Audio effects section, you can filter out frequencies if you wish, change the pitch and change of the tempo of the playback. The Tempo slider is the most useful here, especially for transcribing parts or zeroing on the details of the certain section.

Another strong aspect of Notetracks is the ability to create and share a PDF of the notes with other members of your team, band or any else working with you on the project. In any creative endeavor, it’s important for everyone to have the same information to keep a project running smoothly. Make sure you are zoomed out enough in the project window before you make the PDF so all of your notes are visible. You can share a file via dropbox, AirDrop, email or other apps if you select the project in the Existing project main window by swiping left to reveal the options.

There are many applications for using this App from student musicians to audio professionals. Some of the applications that come to mind but are not limited to:

When importing audio from Dropbox, you have to do it within an existing project in order to see your audio files in your DropBox window. I made the mistake of trying to import a file on the session setup page but this option is only for existing Notetracks project sessions that are in progress or that you may be sharing with others for example.

Another stumbling block I had was adding comment fields. Every time I tried to add a comment field for text anywhere in the timeline, the app would freeze. I was able to figure out that my Logitech Bluetooth keyboard was not compatible with the App. When I turned off Bluetooth, I was able to add and edit comments again. The Notetracks support team was very prompt in responding to my issue and assured me that they are adding compatibility updates for external devices.

Generally, it takes a bit of practice with the App to get a flow going in terms of using and organizing the comment, symbol and drawing fields effectively. It’s best to rely on the markers to help keep the session organized with important notes and comments remaining in the right location. Thankfully, it’s easy to select, edit, move and delete any text, symbols or drawings to keep your workflow moving efficiently.

Notetracks can be useful in a variety of audio related contexts, and I think the developers have done a great job of being the first to design a tool of this kind for iOS. Although I prefer to use some of the features like markers and comments right in DAW while working on session, I would absolutely use the note taking features when writing lyrics over an instrumental track or when transcribing a part using the convenient loop and tempo manipulation tools. Notetracks is definitely worth checking out if you are looking for a tool of this kind for iOS.