It might have a complicated name, but as Scott Riesterer discovered, this new performance oscillator module from Noise Engineering is lots of fun to play with.

The Cursus Iteritas Percido continues the Noise Engineering tradition of giving their modules cryptic and confusing names, unless you studied Latin at some point. This company has been on my radar for some time now, but I never had a chance to try out one of their modules until now. Previously, friends have raved about the unique sound of the Loquelic Iteritas, and it seems like everyone either has or wants a Basimilas Iteritas Alter (I’m in the latter camp for now), so I was eager to get my hands on one of their offerings.

This 24 HP monster is an expanded version of the original 10 HP Cursus Iteritas. For the Latin-ignorant folks out there like me, according to Noise Engineering, Iteritas means “repetitiousness”. The root “itero” means “to repeat” and the suffix “tas” indicates “state of being”. I suppose it could also be translated as a repeating state of being which is what occurs in vibrations or oscillations. For this reason it is the term they use for all of their oscillators. Cursus refers to a series, and percido means danger, so the full translation is “A series of dangerous repetitiousness”. So what we have here is an oscillator made to create dangerous vibrations, which I think is apt considering the vicious and menacing tones it can create. 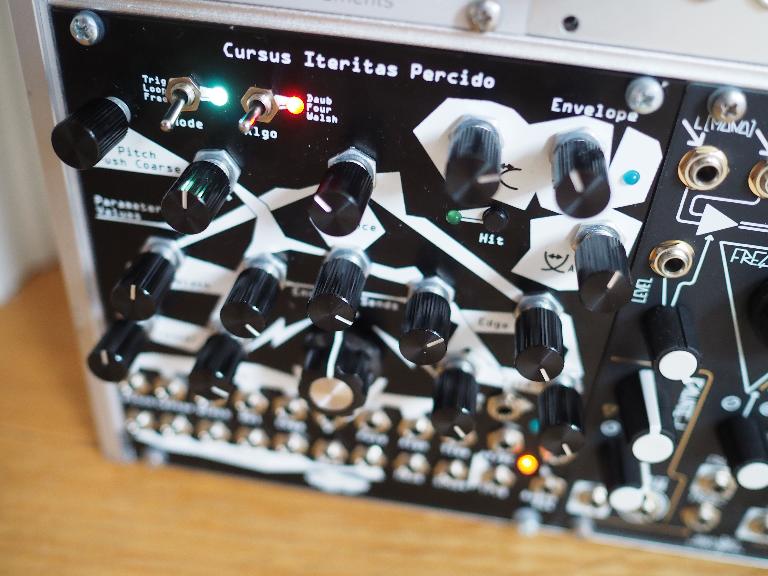 I like to think of the Cursus Iteritas Percido as a performance oscillator. Sure, any oscillator can be used in a live performance setting, but this one has some features that make it uniquely qualified. For starters, the pitch knob defaults to only provide fine tuning, but when pressed will allow coarse tuning. This prevents you from accidentally detuning it if you brush up against the knob while tweaking other neighbouring parameters. Second, the module can function as a full synthesizer voice without the need for an external VCA or filter. Most important however, are the clever Percido features which include a simple but flexible envelope, a phalanx of attenuverters, and one knob to rule them all: The Master Blaster. These features combine with the tone controls to produce a radically fun, hands-on interface capable of quickly transforming tones from growls to screams.

The envelope section has three modes to determine its behaviour. Trig activates the envelope when it receives a gate at the Trig input. Loop causes the envelope to restart once it completes a cycle, and it will reset if it receives a gate on the rising edge. Trig and Loop will both control the volume level at the Audio Out, but Free will not. Therefore, Free will let the module perform more like a typical oscillator that sends a constant tone, while the other two modes allow the module to function as a standalone synth voice. While in Free mode, the envelope can still be triggered by gates to the Trig input to modulate the various parameters of the module.

The envelope itself is a unique design as it does not have the usual attack and decay controls. Instead it has one knob for AT/DC to control the weighting of the attack and decay. Turning the knob counter-clockwise reduces attack and makes the envelope percussive. A centered position has equal attack and decay, while a clockwise position leans more toward attack with a short decay. The shape knob sweeps between logarithmic, linear, and exponential curves from counter to clockwise, and Time sets the length of the envelope. These three controls are different from the usual function generator but quite quick, intuitive, and effective to use. Plus they can all be modulated by CV. 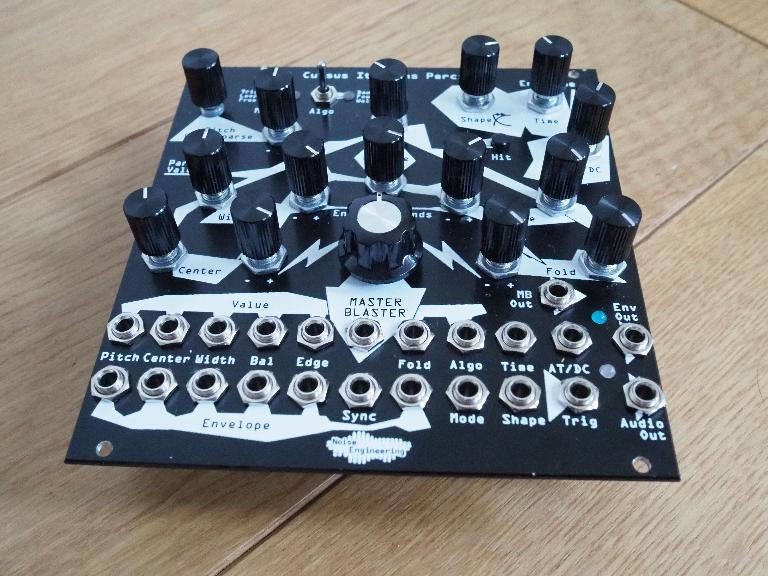 The internal routing of the envelope is where things start getting really interesting. Each one of the tone controls has a full sized attenuverter to control the amount and polarity of modulation sent from the envelope. All of these attenuverters are in turn attenuverted by the central Master Blaster knob. Basically you can set the amount of envelope modulation you want for each parameter, then sweep the Master Blaster to scale the effect of the envelope, or invert it. This makes it easy to make things wild and dial it back, then make things even more wild. I should warn you that this set up is very addictive and rewards active twiddling. With so many knobs with such interrelated responses, it can be a bit of a rabbit hole. Furthermore, the Master Blaster and envelope each have their own CV outputs, so you can control other destinations in your patch in tandem with your probing of the Percido parameters.

Like its slimmer predecessor, Cursus Iteritas Percido is a wavetable oscillator with three algorithms, Daubechies, Fourier, and Walsh. The selected algorithm, along with the settings of the tone controls determine how the wavetables are created and the resulting timbre. Center, Width, and Balance all relate to the harmonic content and relationship of the waveform. Edge is actually an internal oversampling filter control, which can make the tone more bright or dull. Lastly, Fold provides a wavefolder to add more harmonic content and complexity. 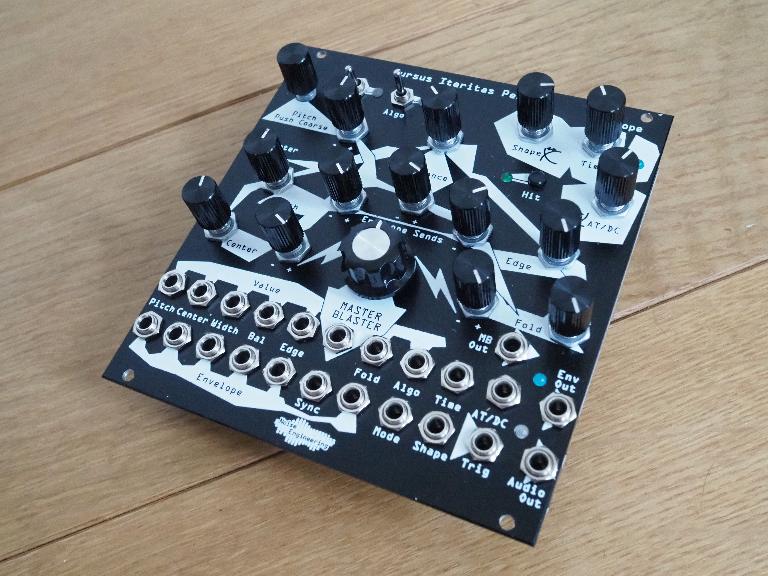 Apparently, the design of this module was largely influenced by Baseck, a friend and supporter of the Noise Engineering crew. He showed them a patch he had set up using Cursus Iteritas with a bunch of pitch envelopes, and I assume a bunch of attenuverters. The Master Blaster idea was then suggested by a new member of the team. It is possible to create this behaviour with separate modules, but its certainly more convenient to have it already set up with no cables required.

While there are certainly lots of other wavetable oscillators out there, Cursus Iteritas Percido takes quite a different approach. Of course, other options may offer a wider tonal palette, but that’s not really the point of this module. Instead of selecting premade familiar or exotic wavetables, they are generated using musical algorithms without the need for a screen. This translates into a very immediate and hands-on oscillator with no menu diving. If you want to get that tone into your system but don’t have the space available, the 10 HP version has you covered. Each offers a digital tone with a lot of character, capable of being metallic, gritty, brash, or smooth. 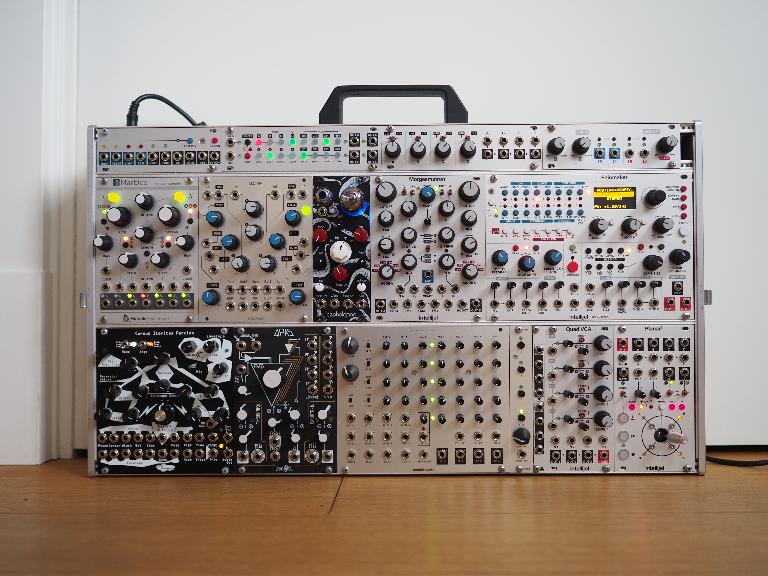 Cons: Envelope is prone to clicking with some settings; Limited tonal range, not a huge difference between algorithms.