Language
Discover why NodeBeat and NodBeat HD for iOS have been turning heads in this review by master educator and musician, Adam Goldberg.

Seth Sandler, Justin Windle, and Laurence Muller have teamed up to create a very organic, entertaining and easy to use music making app that can keep users of any level of ability and experience engaged for hours. With its ever evolving hues, and soundscapes that can develop either randomly or under the control of the user, NodeBeat is an app that is both visually and aurally engaging, while containing a deep enough set of features to provide creative inspiration to the serious musician. The interface is very clearly and intelligently laid out, inviting all to explore. And, for the advanced user, a recent update enables MIDI out on up to 5 channels simultaneously, making it a prime choice for random fun and inspiration when those MIDI channels are sent, for example, to a DAW like Logic Pro for further manipulation of the MIDI, but I'll get into that in my next article. For now, let's get into the onboard features of NodeBeat HD. 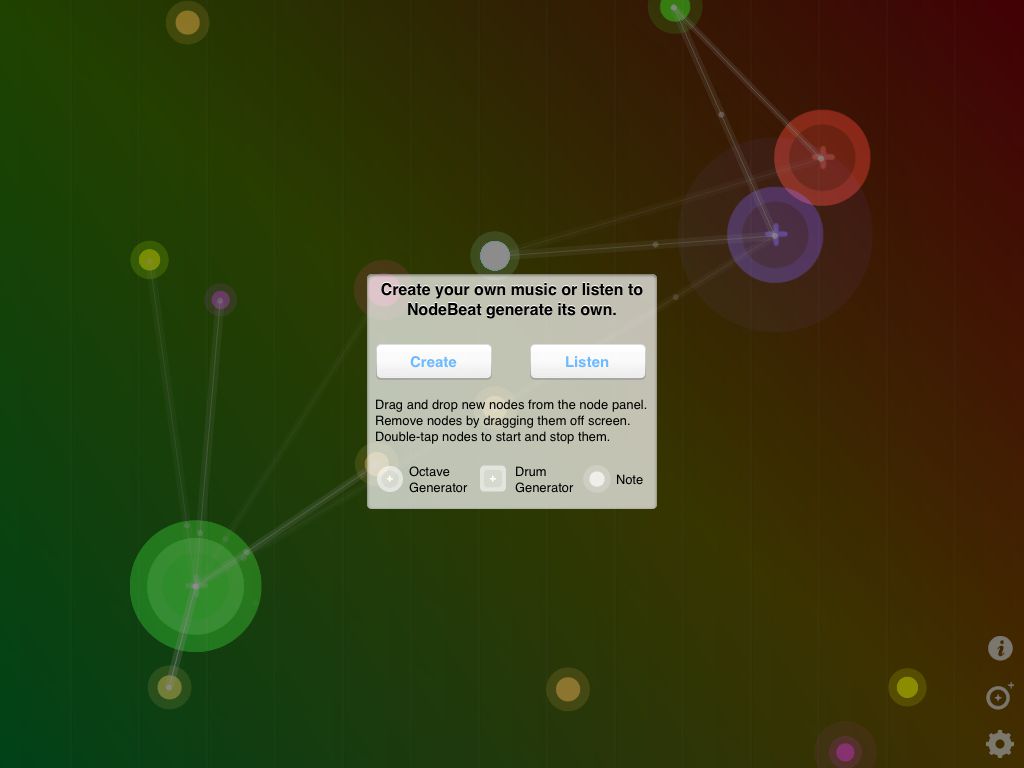 Upon initially opening NodeBeat, one is introduced to Generators and Notes. The startup window shows what the Octave and Drum Generator icons look like, as well as the Notes icon. NodeBeat starts playing immediately upon opening it up, thereby allowing the user to see the basic concept behind the way sound is produced with the app. Different colored Generators are seen pulsing out Nodes along line segments that connect the Generators to various Notes, as they all move in random ways. As the moving Nodes strike the Notes, sounds are generated. The start-up window prompts you to either 'Create' or 'Listen'. Choosing 'Listen' allows the app to continue its random generation of music, but also allows for interaction, as the user can play the Keyboard (delineated by the lines across the interface - vertical or horizontal, depending on orientation), move Generators and Notes around, turn them on and off by double-tapping on them, drag them completely off the screen, as well as many other options that we'll explore soon. The Keyboard allows up to three notes to be played together, and will bend pitch slightly as it responds to finger movement on each 'key'. Moving on, we'll start with a blank project by choosing 'Create' from the startup window. 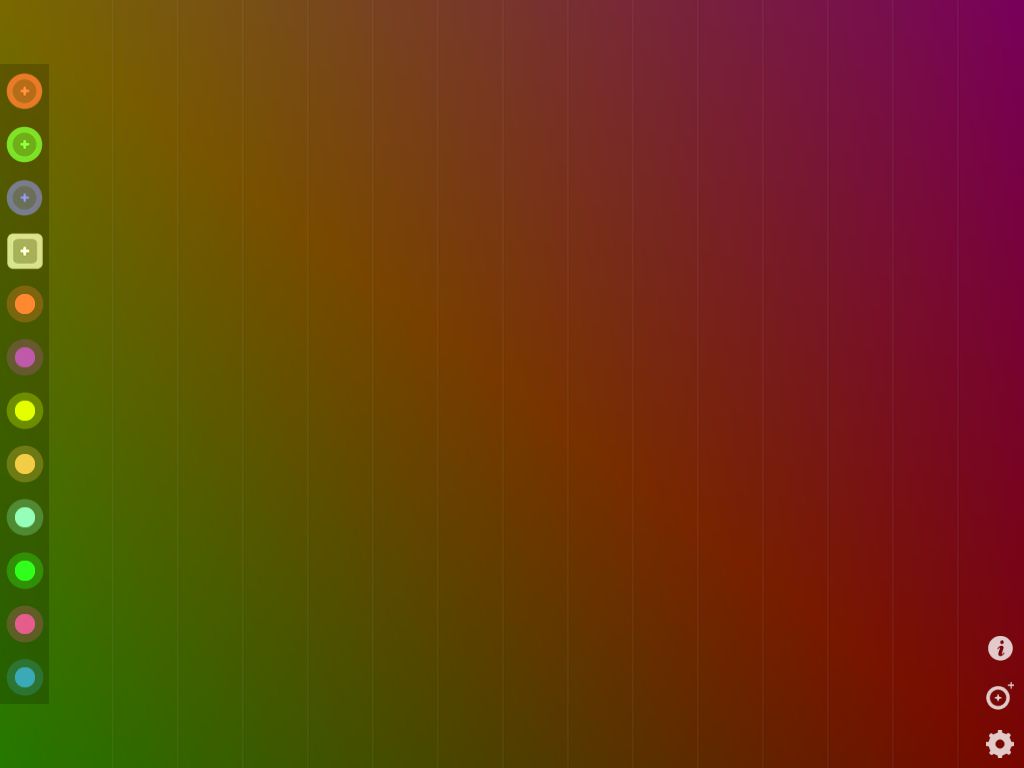 The Beginning of Creation with NodeBeat

On the left side of the screen, the Generators and Notes are arranged vertically. Either can be above the other, depending on orientation, with their colors indicating range. For instance, the purple Octave Generator always plays the highest octave, and the pink the lowest, while the blue Note Generator plays the lowest note within the octave, and the pink the highest. The square generator is the Drum Generator, and sends various drum and percussion sounds to the Note Generators. As Generators and Notes are connected, it's easy to see that rhythm is determined by the distance between them.  You can have multiple instances of Drum and Octave Generators triggering multiple Note Generators. Have some fun seeing how much music you can make before you totally fill the screen!

In the lower right corner of the screen are the global controls for  the General Settings menu, hiding or unhiding the Generators, and app info.

Evolving Further Through the General Settings 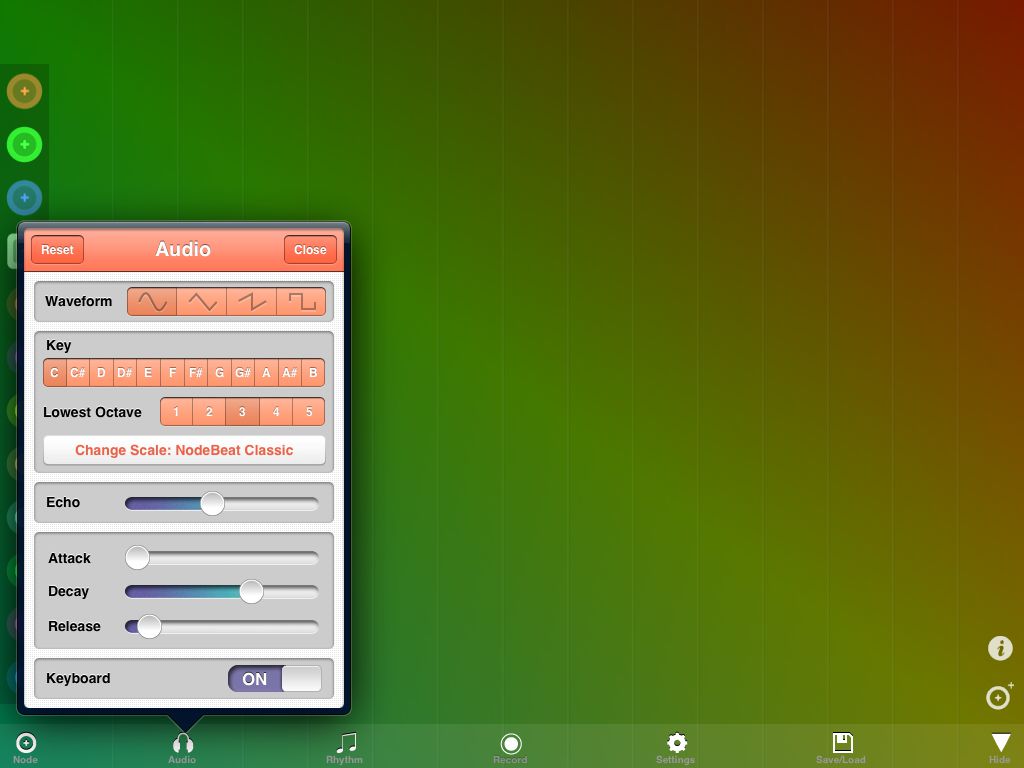 The four basic waveforms at the top of the Audio menu can be altered via attack, decay, and release. One of five different octaves can be chosen, and any key can be set. Twenty-three different scale choices are available, which include the expected, as well as some more exotic ones. A slider for echo allows you to control how many times the echo will repeat, but no other effects are offered. An option to turn the Keyboard on or off is found here as well. It would be a nice addition to see the ability to assign each Generator, as well as the Keyboard, its own audio settings. A basic mixer would also be nice. Perhaps that's something to look forward to in a future update. 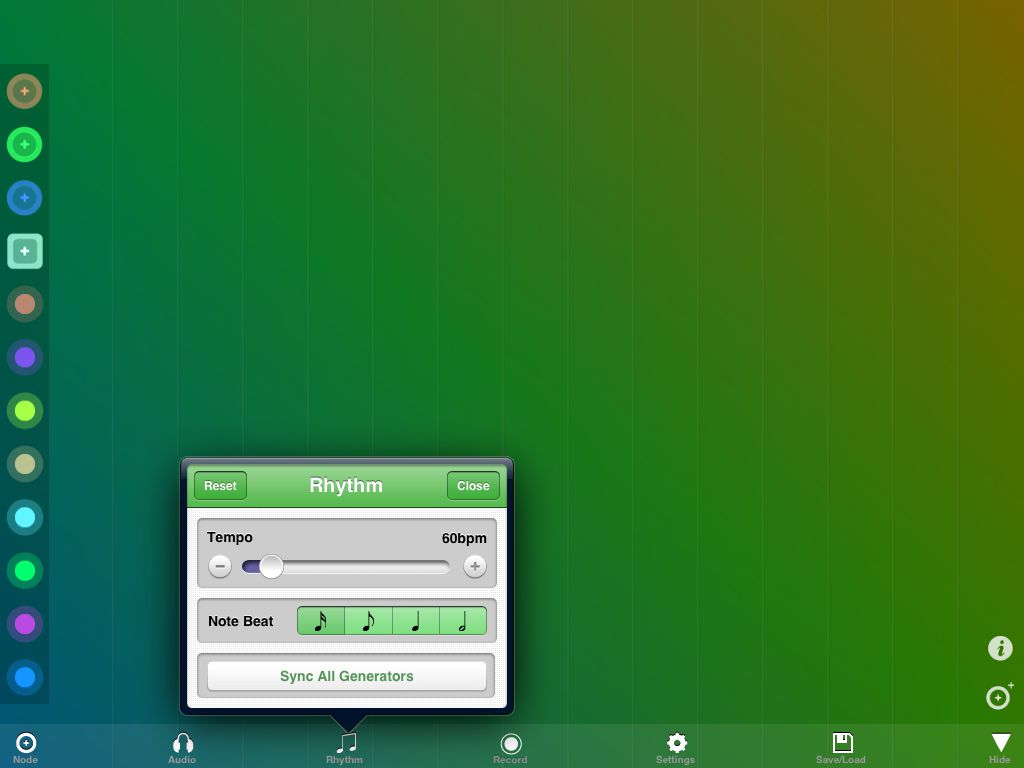 The Rhythm menu contains a tempo slider, with a range from 50 to 150 BPM. Four durations of sixteenth, eighth, quarter, and half notes are offered, along with an option to Sync All Generators. 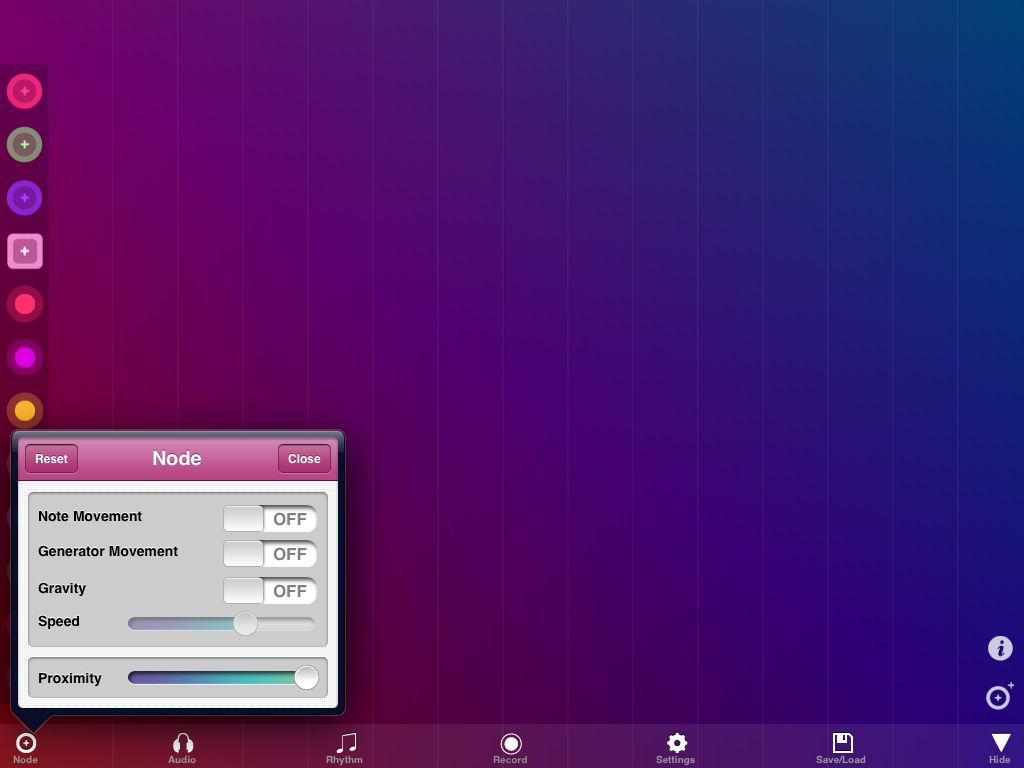 The Node menu is where some of the most fun and inspiration can occur while using NodeBeat. Random Note and or Generator movements can be activated, and the speed of those movements can be controlled. When movement is activated, gravity can also be applied, further adding to the possibilities. Using Proximity adds the final touch for control and variation, as this slider can be used to determine the distance Notes need to be from Generators in order to be activated by Nodes.

NodeBeat projects can be saved, and the app comes packaged with seven different projects pre-saved for you to reference, or mangle if you wish. 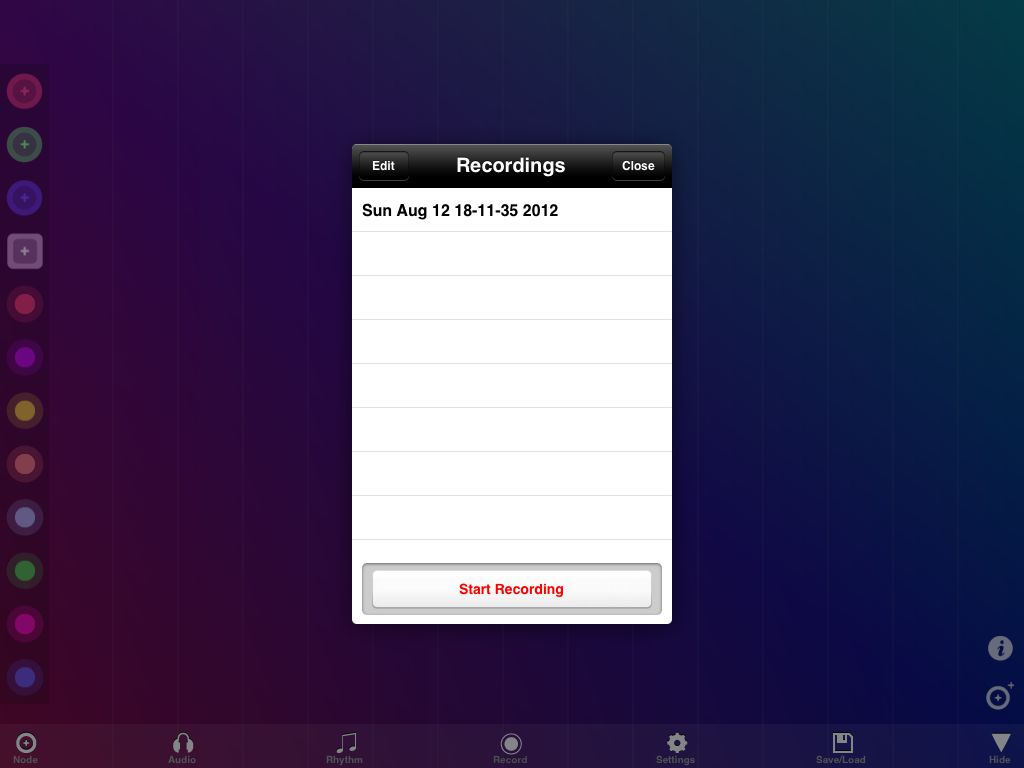 The record button enables you to record your project for the desired duration, then gives you the option to use AudioCopy, send to SoundCloud, iTunes, or email. 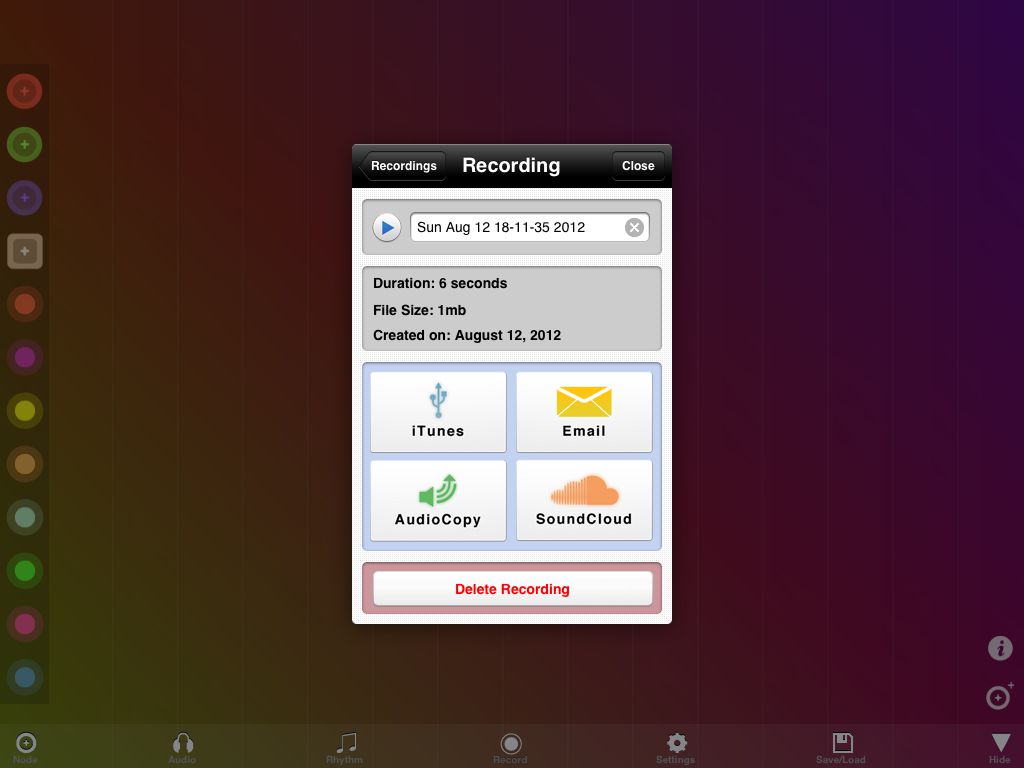 However, what turns NodeBeat into something really unique is its ability to send MIDI on up to five channels simultaneously, as mentioned earlier. Hence, NodeBeat becomes a one of a kind controller with incredible creative potential! I'm off to use it over Wi-Fi to control Logic Pro on my Mac right now. I'll write back about it, if I don't get too absorbed!