Language
Hollin Jones got hands on with NI's flagship DJ controller, Traktor Kontrol S8, and gave it a thorough workout. In our in-depth review we focus on how the S8 feels and works in the real world.

I was lucky enough to be given an early preview of the Traktor Kontrol S8 at NI's offices in London and not too long afterwards received a review model to explore for myself. Let me tell you, it's quite a feat of engineering and if you're as familiar with NI's products as I am you will almost certainly recognize hardware features from its other family members : the backlit pads and large color screens from Maschine Studio, the touch strips and touch-sensitive knobs from Komplete Kontrol, plus a bunch of stuff that's unique to Traktor. Like those instruments, it  continues the blurring of the lines between hardware and software, and shows a continued drive to make NI's software almost entirely accessible from its hardware. 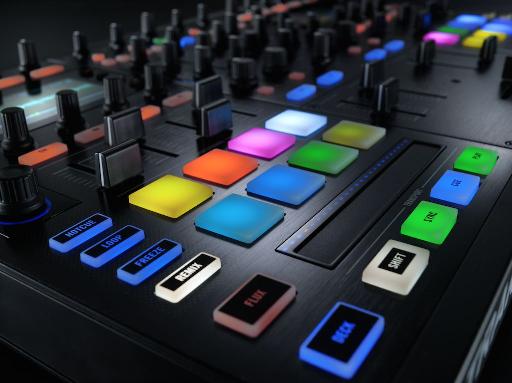 Let me preface this review with an admission: there's a vast amount that this unit can do, and I don't have space to talk about it all in detail. I also want to avoid simply listing features, since all of these are available on NI's website for you to check out, along with some great videos. What I'm going to talk mostly about is how the S8 feels in real life and how it does its job.

The S8 is large'"it has to fit all those controls in'"but less thick than you might imagine at just 6.6 cm. At 5 kg its weight feels about right and the build quality as always is excellent. There's a Kensington lock port and also six screw threads on the underside for securely attaching it to a surface or perhaps a flight case. It's portable enough that moving it around isn't a chore, though at the same time it's not really meant to be carried about in a rucksack either.

"Look around the back and you will understand why this is a flagship product: there's a ton of I/O."

Look around the back and you will understand why this is a flagship product: there's a ton of I/O. As well as integrating with Traktor, it's designed to also operate as a completely standalone DJ mixer with no computer present, so it has to account for that as well. There's a USB port for connecting to your Mac or PC (and it can also act as a generic audio and MIDI interface with any software, not just NI's), and hardware MIDI in and out ports. There are four line/phono inputs each with a toggle switch for connecting turntables or CD players as well as a Ground Post, two mic inputs (one XLR and one jack), stereo jack outputs for Booth Out to connect to stage monitoring and a Main output section. This has two sets of connections: unbalanced RCA and balanced XLR, the latter better suited to hooking up to power amps and club sound systems. The front panel has its own controls with switchable crossfader assignments for each deck, an XF Curve Knob and a headphone output with both mini and ¼ inch jacks, great if you've lost your headphone adaptor. 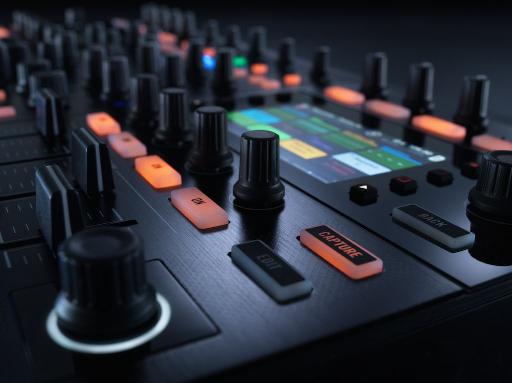 The front panel broadly mirrors the layout of the Traktor software, and you get Traktor Scratch Pro 2 bundled, with all the features of Traktor Pro 2 plus timecode control functionality. The central section is the mixer and this has gain knobs and level faders for four decks. You can control master volume, cueing and mic inputs from here and it's clearly laid out. The EQ and filter sections also work in standalone mode and there's a crossfader at the bottom that feels durable yet fluid enough for even the most demanding scratch DJ. A Traktor mode button on each channel flips it between Traktor and standalone mode, useful for handing over to the next DJ. 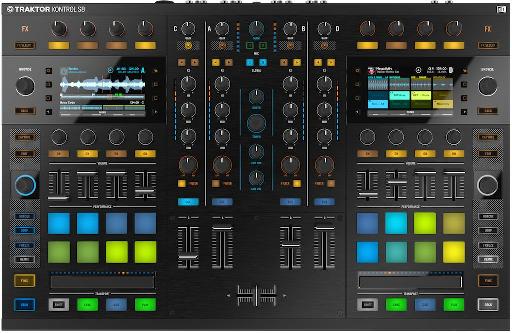 The color screens take the S8 into a different league when it comes to using Traktor without looking at your computer and performing and making edits on the fly. They're not touch screens which is a good decision, since to make touch work on a product this complex you need really quite large screens. Instead there are buttons on all sides that call up various functions depending on the current mode. Within each screen you can call up small additional menu displays, and these are perfectly usable. Browsing tracks is done graphically with the Browse dial, and all beat grids and waveforms are shown on screen together with all the information you'd get in the Traktor application. 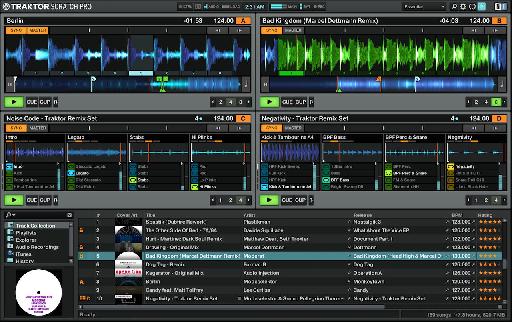 You may have noticed that the large CD jog wheels have gone, to be replaced by new touch strips with LED feedback. These are really nice to use, and double up as pitch controllers and scratch pads as well as letting you zoom around a track when you hold Shift and drag. They can be configured in the software's preferences. Another great feature is the touch-sensitive knobs in the FX sections at the top. Touch one and you can see all the current FX values without changing them, and also cycle through effects using the Select button. All of this is actually taking place on your computer of course.

"The large CD jog wheels have gone, to be replaced by new touch strips with LED feedback... (which) are really nice to use."

Lower down the unit is the performance section and this has various functions depending on whether you're in Freeze, Beat Jump, Remix or regular playback mode. You can sample sections of tracks into slots using the Capture control and drop them back in, trigger slices of a loop, jump back and forth using Flux mode or use Remix mode to create whole new performances. All of this has its own detailed but clear feedback on the screens and thanks to the size of the unit, there are enough physical controls that you're not constantly using Shift keys to access sub-functions. This makes it easier to learn than a smaller box might necessarily have to be. Most of the controls have clearly labeled functions and when they have more than one, this is shown using clever feedback on the screens.

The S8 is a fantastic Traktor controller and also a standalone DJ mixer and an audio and MIDI interface in its own right. Remarkably, when you use it with Traktor you forget that all the work is actually being done on a computer, so complete is the integration between the two. This would be impossible without the two screens and to a lesser extent, the color-coded, backlit buttons. Bringing the touch sensitive dials over from Komplete Kontrol is a good move, and the touch strips suit DJ'ing really well, letting you navigate, zoom and manipulate scratch controls with ease. The I/O is excellent and means that you can bring lots of physical sources into the mix, not just tracks streamed from your computer.

"If you're serious about performing, you'll find that the S8 does pretty much everything you could ever need."

Another important thing to note is that pairing the S8 with Traktor seems to make the software easier to use, in my opinion at least. This is almost certainly because of the large number of physical controls, the smart layout and the way the hardware opens up access to the software's many features in a manner that's more or less impossible on a computer screen using a mouse. It's an investment, yes, and possibly a stretch for those with only a passing interest in DJ performance. But if you're serious about performing, you'll find that the S8 does pretty much everything you could ever need.

Ray
How is the pitch control when mixing tracks between different genres?