Polyplex by Native Instruments has been designed in collaboration with Twisted Tools and is an eight-part drum sampler with an emphasis on randomizing all kinds of elements to create new, interesting and unique kits. It's probably aimed most directly at producers making electronic music though these days that means casting a net much wider than EDM and can encompass soundtracks, TV music and other genres. It runs in the free Reaktor 5 Player or in the full version of Reaktor 5 and thus can run either as a standalone app on your Mac or PC or as a plug-in inside your DAW in all of the major plug-in formats. At just £59 / $69 it's remarkably good value too as you may agree after having read about its capabilities.

Polyplex has eight slots and each one of these can hold up to four samples which make up the different layers of that specific drum sound. Layering sounds together to build beefier sounding kits isn't new but the way the instrument works with them is much more ambitious than you might expect. Each layer can have a type and a subtype selected such as Kick > Analog or Snare > Acoustic for example. Polyplex comes with around 200 MB of samples which isn't a lot but once you see how flexibly it lets you work with them, will almost certainly seem like enough. There is a “User” option in each layer which allows you to use your own samples as layers, though this does mean delving into Reaktor's Sample Map Editor which might mean spending some time teaching yourself how that works if you don't already know. In truth although it's nice to have the option (albeit a slightly fiddly one) of using your own samples you may well be happy with the bundled content. The interface is slick and functional but definitely not basic.

Next to this section are various sound control sliders. Samples lets you specify which sample to use and is set as a MIDI value between 0 and 127. Pitch and Pan do what you probably guessed they do and Start sets the starting position of each layer in time. Finally there's a volume section to mix the layers against each other. If you click through to the other control sections you will find similar sliders for Envelope parameters and also for EQ and all these controls have configurable minimum and maximum values so you're not always varying between 0 and 100% of any given control.

Use the sliders to set the parameters of each layer.

Here's where stuff starts to get interesting: you can randomize almost anything in Polyplex. Starting with the master control panel at the top, you'll find a Master Randomization button. If you press this, Polyplex will alter each slot and each layer within each slot plus the controls of any layer that has randomization enabled. You can actually switch randomization on or off for any slot and also for any parameter where the small dot button appears. So you can either randomize  a whole kit, or if you're mostly happy with it, just randomize one drum sound to alter it. Or, just randomize the start position of one layer and nothing else, or any combination of the above!

There are seven Kit Variation slots available per instance for copying and pasting setups and creating modifications as well as the ability to map MIDI keys or notes to individual slots using MIDI learn. For any sound slot, there's also a quick controls bar where you can control volume, balance, tuning and decay with the mouse for quick sound alteration. You might notice the sound slots are color-coded, and these sync up with the colored keys (Light Guide) on NI's new Komplete Kontrol range of hardware MIDI control keyboards.

Use MIDI learn to quickly assign pads or notes to slots.

This all works brilliantly and it's a breeze to create whole new kits or make cool sounding changes to existing ones using these randomize controls. There are also some great onboard effects to liven things up: 18 to choose from including dynamics, reverb and glitch and you can use up to four at once, two inserts and two sends. These are very cutting edge, modern-sounding effects and encompass stuff like stutter, grain delay, frequency and pitch shifting, and they sound awesome!

These are very cutting edge, modern-sounding effects and encompass stuff like stutter, grain delay, frequency and pitch shifting, and they sound awesome!

Better still, you can add movement and life to the effects by assigning the envelope follower section to effect parameters for rhythmic modulation. Also assign the LFO, envelope or velocity sections to modulate many different parameters, such as the attack envelope or sound pan with variable amounts and you can quickly create a fluid, dynamic, shifting effect. And remember that all this stuff can be set up for each individual layer of each of the eight slots. You can see how much control you can have over the drum sounds. 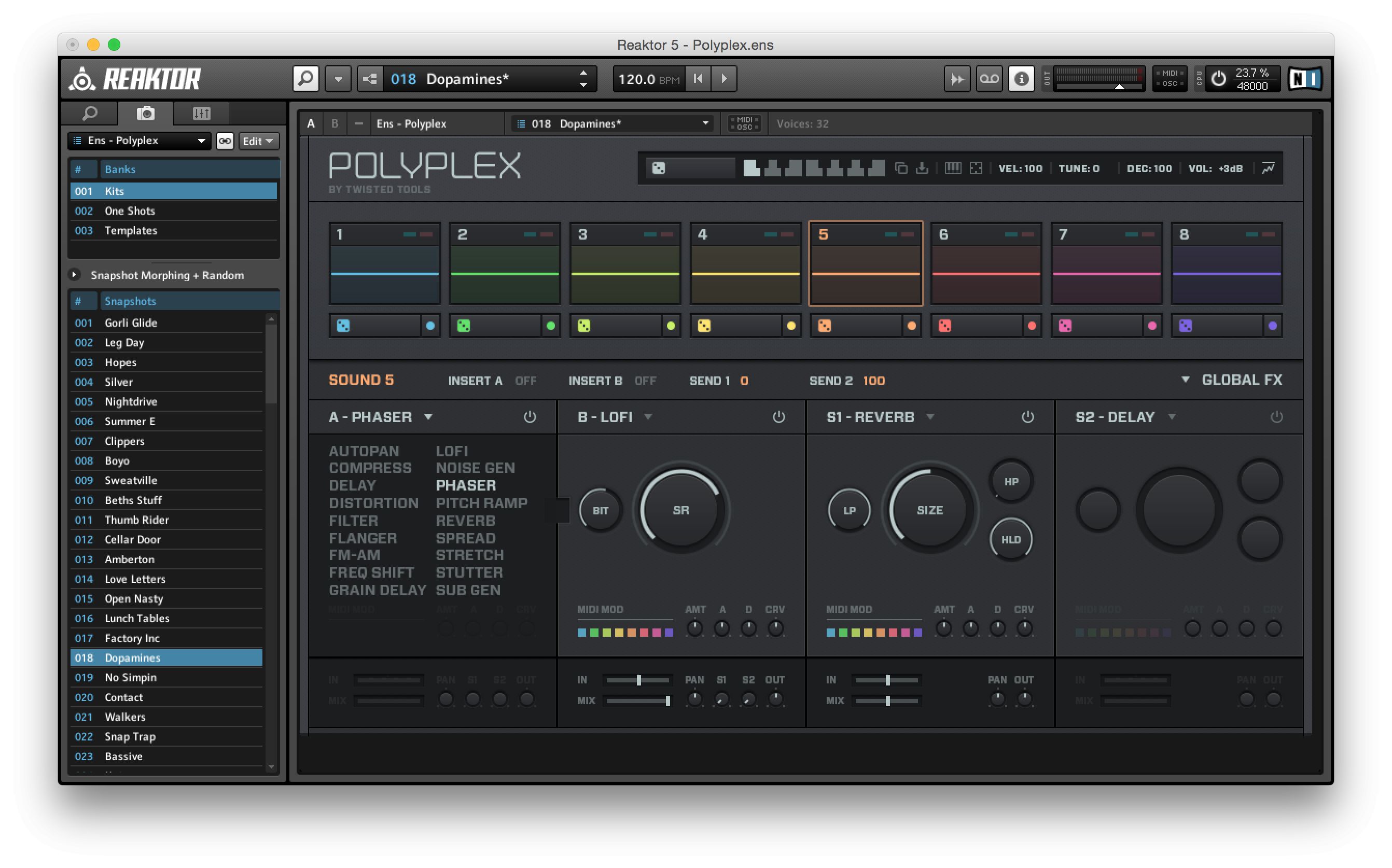 Some cool-sounding effects to spice up your sounds.

Poly is a cracker

All of this would be a bit dry were it not for the fact that Polyplex sounds excellent. Check out the audio demos on NI's website and you will surely be blown away by just how usable these sounds are. They beg you to build epic tracks around them, with their huge kicks, crisp, animated snares and cymbals and a weird and wonderful assortment of bleeps, sweeps and futuristic sound effects. This is a very different instrument to something like Battery that comes with a stack of content and focuses on waveform manipulation. Here, you are presented with a rather different set of controls but ones which are even more useful for the majority of electronic producers. The 142 presets are mostly great too. 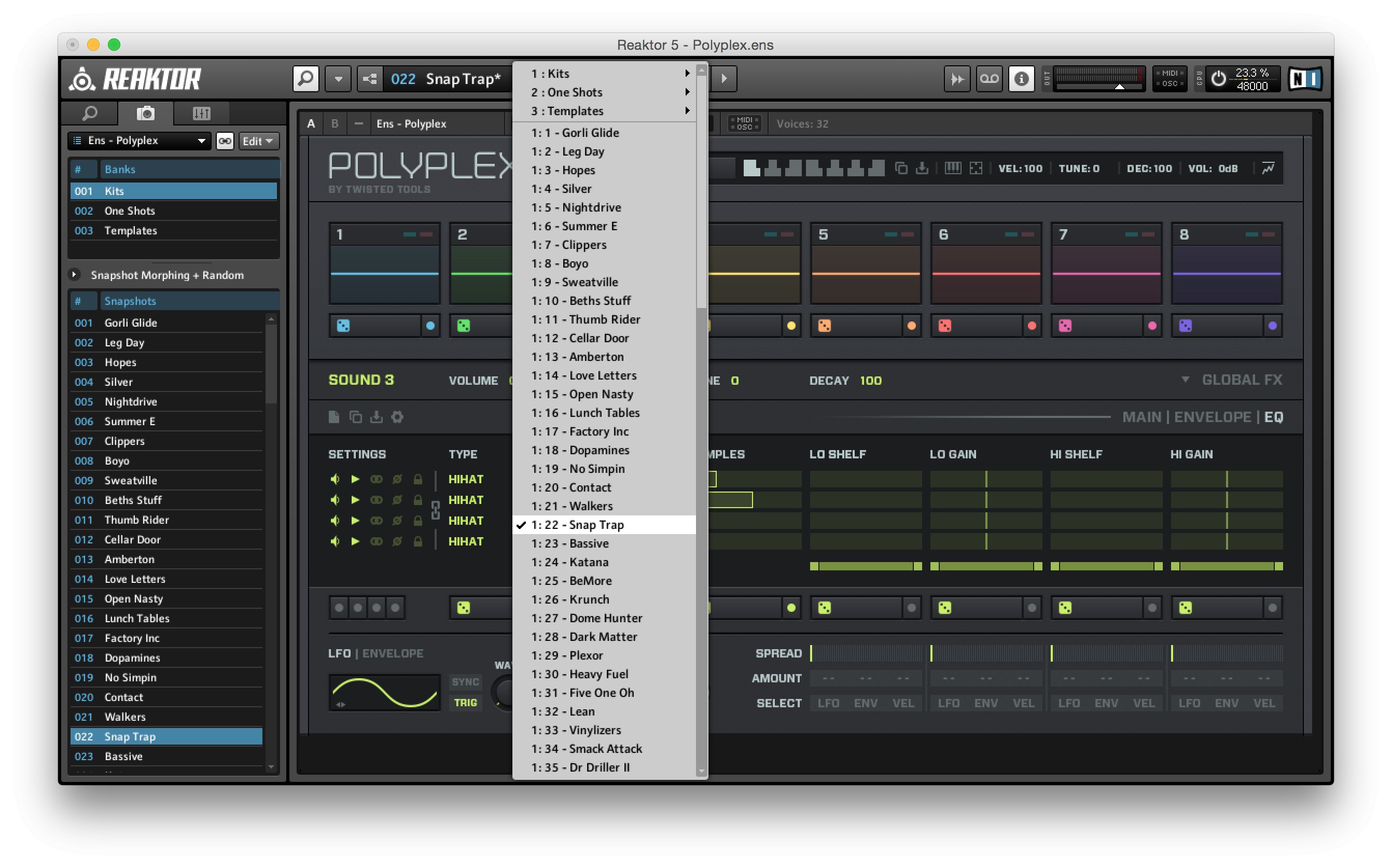 Let's be honest, building drum kits can be pretty dull, cycling through hundreds of vaguely similar sounding samples until you start to go nuts. Polyplex does away with a lot of that tedium. Sure, you can go into great detail with tweaking the sound if you like, and sometimes you might. Maybe you're obsessive about this stuff, and that's cool. If on the other hand you want to keep hitting a button until the snare sounds like you want, you can do that too. Or hit the Master Randomize button to just fire all-new settings across the instrument. Dial in some cool sounding effects, tweak them and use MIDI to modulate them too for an even more interesting and dynamic sound, and you'll wonder why you ever spent hours looking for drum hits that worked well together. With the really quite affordable Polyplex, it's a snap to build massive, cutting edge kits and tailor them to your needs quickly and easily.