Native Instruments' Massive X is finally here and it's a completely new version, reinventing this flagship soft synth for the next generation. Rishabh Rajan put it to the test.

Back in 2007 Native Instruments brought Massive to the market, a software synth that would come to define the sound of electronic music. Over the next decade, the sound of electronic music changed and the domination of Massive as the de facto wavetable synth started to wither away in the face of some very strong competition. Now, in 2019 almost a year after the official announcement, MASSIVE X is here. Are they too late or do we have another decade of genre-defining sounds to experience with MASSIVE X? Let’s find out. 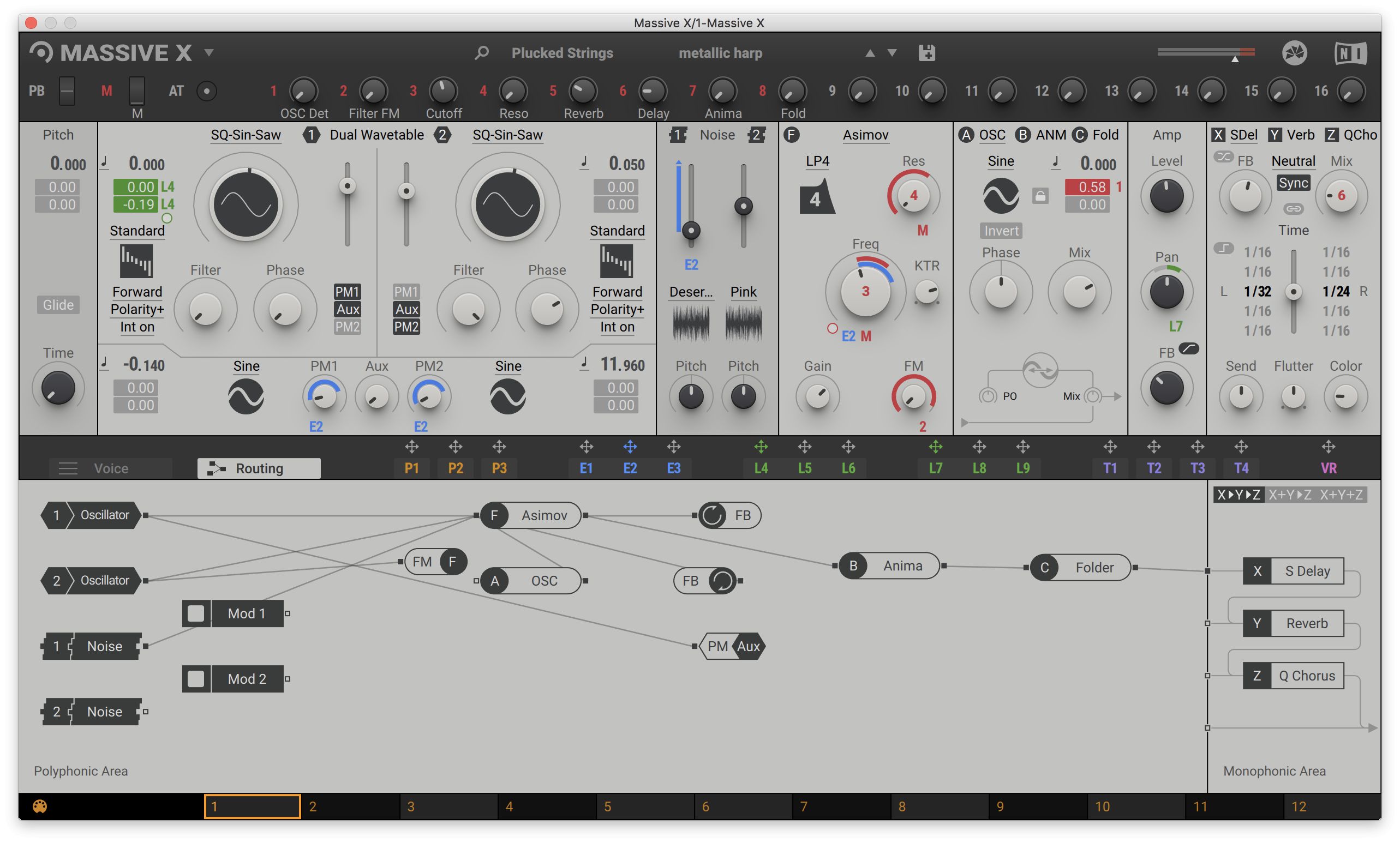 MASSIVE X is not an upgrade to Massive. It’s a completely different software synth. It’s not a Reaktor ensemble, but a completely new application coded by the original developers of Massive. The interface is the most obvious change when compared to the original. Yes, it looks great, but it does take some time to get used to. One of the biggest drawbacks is that there is almost no visual feedback of any kind. Massive probably has more visual feedback than MASSIVE X. Having said that, the software is a work in progress. The development team is working on adding a lot of visual elements to make the synthesizer easier to work with. Most modern synths have tons of visual feedback so this is an absolutely necessary addition. For examples of this, see Xfer Records Serum, Arturia Pigments, Ableton Wavetable & Roli Equator.

Almost every new wavetable synth on the market boasts tons of wavetables and the ability to load in your own wavetables or just make a wavetable out of any short audio sample. MASSIVE X has tons of wavetables but currently does not have an import feature. This is definitely a major drawback but I have been told that this feature is also in development and is coming soon. I remember when Ableton gave us a preview of Wavetable, everyone wanted to know if it could load custom wavetables and initially it couldn’t. So here’s another feature to look forward to in the next release. 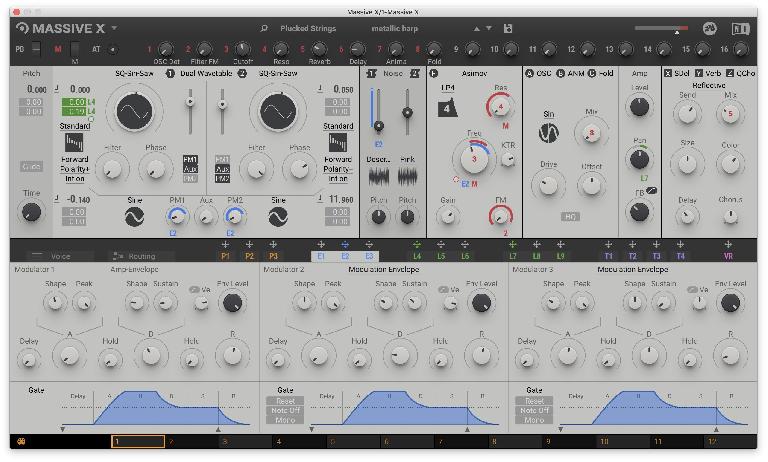 When it comes to wavetable manipulation modes, MASSIVE X blows the competition away. Aside from the usual bending and wave folding modes, NI have developed some really interesting new modes that open up a lot of sound design possibilities within the wavetable section alone. The entire wavetable section is highly tweakable and there’s enough there to keep the user engaged for a while before they might feel the need to load in custom wavetables.  As for dedicated Oscillators, there is a dual wavetable engine, but there are also oscillators  that can be loaded into the Insert Effects. On top of that even the LFOs can run at the audio rate and can be routed to the output. In total you can have 7 dedicated oscillators running simultaneously.

The original Massive had a dedicated Modulation Oscillator, but now MASSIVE X has two modulation oscillators that can phase modulate any of the two wavetable oscillators and there is also the possibility of routing an external signal as a source of modulation thanks to the very powerful routing tab.

I never thought I would need anything aside from white & pink noise until I tried out Xfer Records Serum. MASSIVE X takes this a step further, adding a dual Noise Wavetable engine with plenty of esoteric noise samples and dedicated pitch controls for each. Some of the noise samples are a lot of fun to work even without mixing  the sample with the main dual wavetable.

In a way the filter section in MASSIVE X seems less significant than the original. There is now just one filter but with a lot more filter options. There’s even a more CPU efficient version of the Monark filter. There is also a parallel and serial State Variable Filter module that addresses the need for multiple filters. Personally I very rarely used the multiple filters in Massive, so simplifying this is a welcome change. Having said that, all the flexibility that comes with routing oscillators and noise to the two filters with the crossfader is now gone. 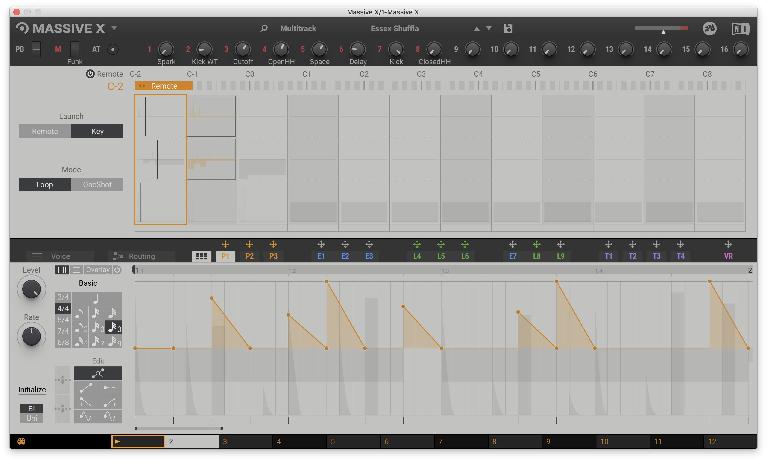 Insert Effects have also become a lot more significant now with three separate slots with 11 unique modules. Aside from the usual bit crushing and distortion modules you get analog style oscillators that can be mixed in with the dual wavetables. You also get a VCA in the form of a Utility module that can be put to good use depending on how it’s set up in the routing tab. One of my favorites is the Anima module, a cross between comb filtering and a flanger.

The Master Effects section has also become a lot more significant than it was in the original version of Massive. You get three effects slots and most of the effects have plenty of dedicated controls. The Reverb is particularly flexible with 17 separate reverb algorithms so you are not stuck with just two reverb sounds like you were in Massive. The Quad Chorus sounds fantastic and that too has a couple of different algorithms to choose from. Overall the Unit Effect is great for adding that final touch of sheen to your sounds and having three effect slots means you can add that much more processing to a sound. Interestingly you can add the same module thrice. Try adding three reverbs set to the Wanderlust algorithm and get an almost infinite decay.

For me this is hands down the best feature in MASSIVE X. Massive had some flexibility with insert effects routing but in MASSIVE X, this seems more like a full-on Modular system. Almost anything can be connected to anything else. Some people are calling MASSIVE X a semi-modular synth but technically if nothing is hooked up in the routing tab, you will get no sound. Just like on a fully modular synthesizer, you have to patch things in to get sound. You can route LFOs to the audio output in the routing tab. You can add a VCA control to any signal in this tab. There is a lot of  flexibility that you just don’t see in any fixed architecture synth design.

If the routing flexibility is my favorite feature  of MASSIVE X, the new Modulation capabilities seem to be the feature most strongly highlighted by Native Instruments. In every sense, the modulation is above and beyond what you get in any other Wavetable synth. There are 9 modulation slots, with one fixed as the amp envelope and the remaining 8 able to be set to a modulation envelope, an exciter AR envelope, a Switcher LFO or a Random LFO. That’s right  - now we have a real random LFO, unlike the previous wavetable-based random LFO in Massive that wasn’t really random as it would eventually repeat.

To top all that off, there’s the all new Performer. The three Performer modulators in MASSIVE X are everything the original one was and more. It’s probably the most customizable modulation source since Absynth’s envelopes. There are multiple shapes to choose from for quickly drawing in patterns. Drawn-in shapes can be easily bent and deformed in all kinds of ways with the bezier curve editing capabilities. On top of all that the overall Performer shape can be squished and stretched like a DAW’s audio warping algorithm to produce some really complex patterns that go off the grid literally and figuratively. To take this a step further, each performer can also have 12 variations with the remote octave control. For me this is overkill but think about morphing through different complex performer shapes across the keyboard range or controlled via an external controller. You can potentially create movement that is constantly evolving and never ending.

Probably one of the biggest issues with MASSIVE X is the lack of visual feedback in the GUI. This should be priority number 1 for the next update. The synth doesn’t work with non AVX-compatible CPUs. AVX stands for Advanced Vector Extensions which are extensions for the x86 instructions set architecture introduced in 2011. In other words, you can’t use Massive X with a computer released before 2011. This shouldn’t be a huge issue as computers tend to have a relatively short life cycle and most people should have a compatible CPU. Having said that there are still some folks who have older machines and wouldn’t want to upgrade just for MASSIVE X.

The synth is also quite CPU heavy  when compared to the original Massive , which in my opinion is probably one of the most CPU efficient software synths out there right now. I’ve noticed this with many 1.0 releases. They usually tend to be CPU heavy but eventually get to a more efficient stage in future updates. I’m pretty sure MASSIVE X will get more CPU efficient in the future. Currently MASSIVE X runs as a plug-in only. There might be that one person out there who still needs to run MASSIVE X in standalone mode, but they might have to wait. It's definitely coming. Lastly, MASSIVE X has lost the Program List feature. With Massive 1 you could create a set list of 128 patches and recall any with Program Change messages, which was  very helpful for live performance scenarios. I’m not sure if this will be back in MASSIVE X in the future but if there is demand, NI might bring it back.

Learn everything you need to know about Massive X: https://ask.audio/academy?nleloc=course/3404/massive-x-explored

Unfortunately this is not true: the original massive had the ability for the performer to be poly instead of mono; here in massive x it is mono only.