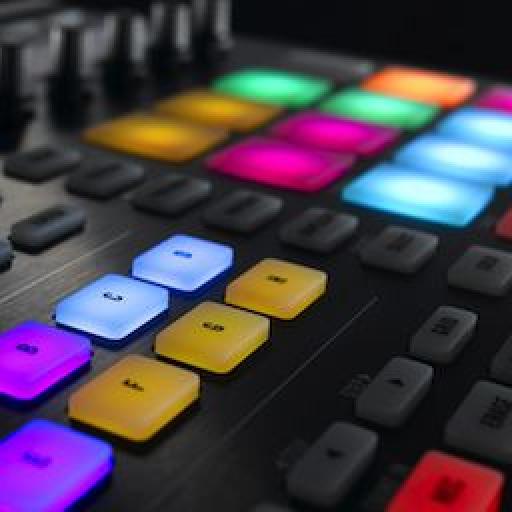 Some products in the world of Music Tech simply grab people's imagination. Maschine has been one of those rare devices that has had everyone talking since its release. When NI announced they were releasing an updated version there has been a healthy amount of anticipation in the air.

I was lucky enough to get hold of one of the early units and have since replaced my Maschine Mk1 with the new arrival. So is the upgrade worthy of the hype it's generated? Let's take a look...

It's always nice to have breakfast with a new piece of kit on the table, especially when it's a new release from NI. I've been a long time fan (and user) of Maschine so I was obviously pretty stoked about testing the new version. 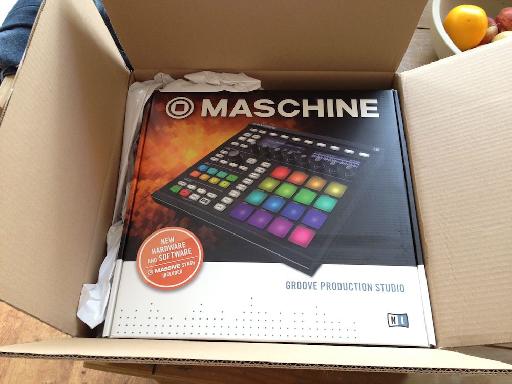 A welcomed guest at the breakfast table.

I'd obviously read the upgrade list and knew that a big part of the Mk2's appeal were the cosmetic tweaks that had been made. The box art clearly showed some of these and as soon as I took the new version out of the box, I could see that a lot of effort had been made to update the product without losing continuity. 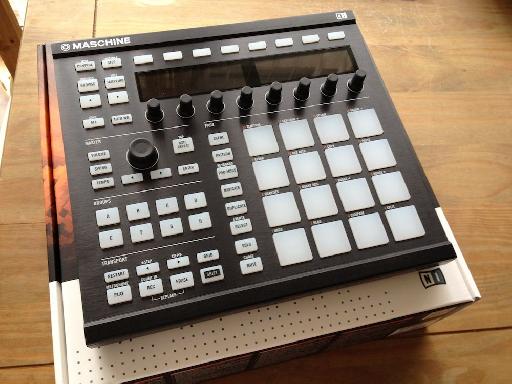 One of the main points that I have heard being discussed over the last few weeks is the addition of multi-colored LEDs throughout Maschine's interface. Let's take a look at this aspect first.

The original Maschine wasn't exactly greyscale in nature. The LEDs used in the pads and buttons presented a great way of seeing what was being triggered, which slots were active and the specific group you were working with, but the Mk2 takes this to a whole new level with no less than 16 possible color combinations per button. 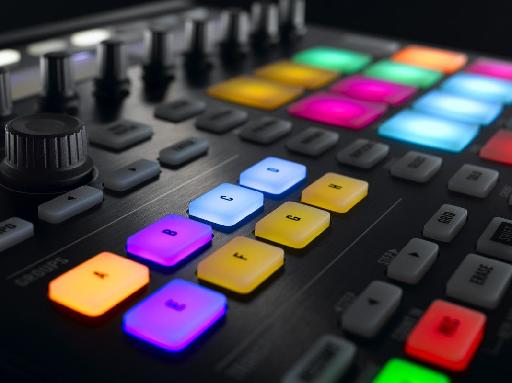 The new color LED system in all its glory.

At first you may think that this dazzling array of colors could be a distraction from your usual workflow but I found that in reality the system proves extremely useful. For instance imagine automatically coloring all of your kick drums red, your hats yellow and snares blue (and so on). 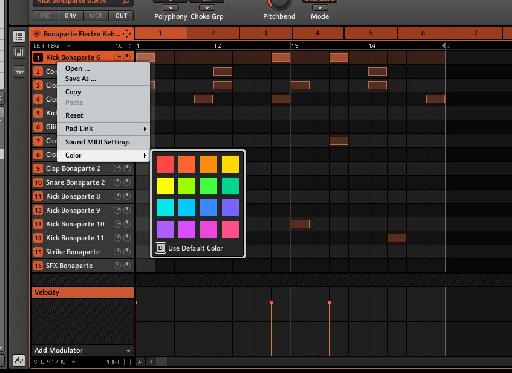 Changing elements colors in the software is really straight forward. 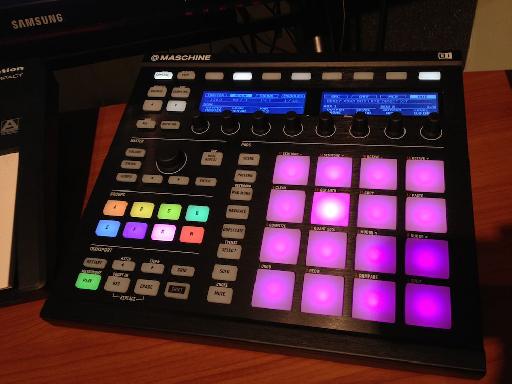 Some color coded groups in action.

This sort of workflow enhancement could mean less time reading menus and more time programming killer patterns. Plus as you can see from the pics taken in a darkened room below, the whole thing looks great. The picture of the MIDI mode shows that the colors can be used a pretty conservative fashion too. 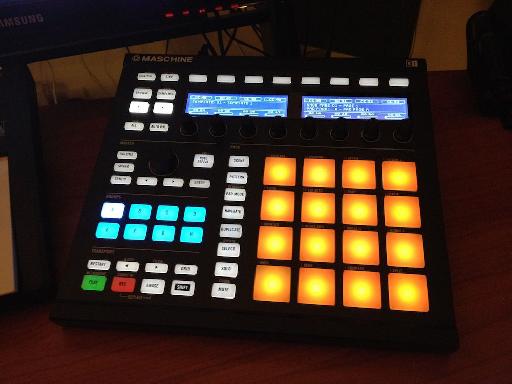 The color modes can be used for more subtle effects.

Apart from the pretty colored LEDs, the guys at NI have obviously listened to user feedback as there are some other important tweaks to the hardware. At a very basic level, the information printed on the front panel is much clearer and a whole lot easier to navigate. 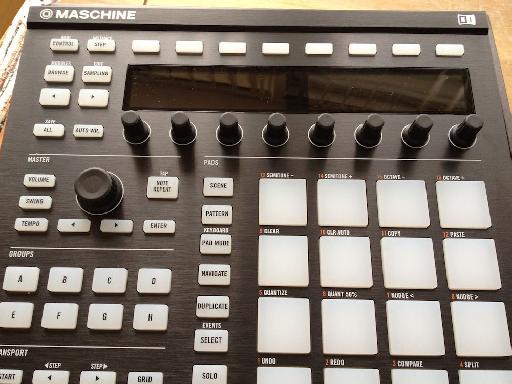 On a deeper level the actual hardware itself has had an overhaul. All the buttons (except for the 16 main pads) now give out a satisfying click as they are pushed. This is certainly a nice touch and makes the whole thing feel much more solid.

The main pads seem to have been tweaked as well and now feel even more responsive. On playing with some familiar kits I noticed that it was easier to input varying velocities.

Another major update is the main / dual displays. They are now inverted which makes the readout much easier on the eye. I suspect there is also more going on here as they are housed in a different plastic covering but all you really need to know is they are an improvement over the last version! The dual displays are now inverted for clarity. Finally, the layout of the controls remains more or less the same as in the Mk1 except for one area. The master section now drops a number of knobs in favor of one single master encoder. This is also clickable and is used for navigating through effects types, samples and kits. I found this to be a great improvement and I'm happy to give it the thumbs up!

All Maschine Mk2's ship with the new 1.8 software (very recently updated to 1.8.1). Don't worry if you are the proud owner of one of the earlier Maschine controllers as the new version is fully compatible with all models of hardware. The only thing you won't have access to are the multi color related features. There are plenty of other new features to get excited about here though, the most important of which is probably the new time stretch capability. Many Maschine users have been waiting for this with bated breathe. Time Stretching is now available directly from within Maschine.

Essentially, you are now able to manipulate the time and pitch of samples within the Maschine software without using a third party application. A huge time saver and the results are actually very good.

On top of this, NI have bundled some new effects with V1.8, including new tube saturation models and the excellent Transient master processor. As an extra bonus any registered Maschine owner will also receive a free copy of NI's legendary Massive synth. Seeing as we all love a freebie this can only  be a good thing. 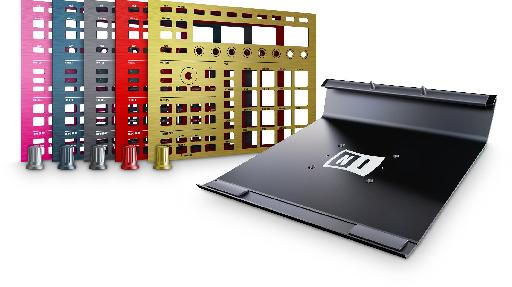 Be sure to grab some of NI's great new accessories to add a bit of bling to proceedings.

While the Mk2 isn't a revolutionary upgrade and at first glance is pretty similar to the original, it really is a solid update to an already solid bit of kit. The somewhat flashy multi colored lighting is actually really useful in everyday workflow, and the minor adjustments to things like pad responsiveness and the master encoder add up to more than the sum of their parts.

If you are a current Maschine owner you may not be first in line to purchase the new version, but for anyone considering delving into the world of NI now really is a better time than any. This tried and tested product just got a serious boost and with constant upgrades to the software, hopefully things can only get better.

Lung
Would you say that the updated pads are negligible or a significant improvement over the MK1?
Mo Volans
Hey Lung... well the difference is certainly noticeable, so yeah I would say it is significant. Especially when you take into account the new clickable buttons.

Whether it's enough of an update to persuade current Mk1 owners to upgrade is yet to be seen ;)

Lung
Very cool. Even though the MK1 pads are great the pad improvements would still be a big deal for me. I will try to demo one locally. Thanks!