Language
It looks like a regular, well-designed, MIDI keyboard, but Hollin Jones finds out there's much more going on with Native Instruments' Komplete Kontrol S-Series than meets the eye.

In a sense, it's surprising that Native Instruments hasn't made its own keyboard controller before now. The company's expansive range of software instruments is MIDI-triggered, and it has enjoyed great success with its hardware for DJs and beat-makers with Traktor and Maschine respectively. But I have been working with NI products for long enough to know that they will only do something when it's absolutely right, so I knew when I first saw Komplete Kontrol at a private demo in London that it was going to be something special. I also received one of the first hardware units in the country for review so I was able to really put it through its paces. 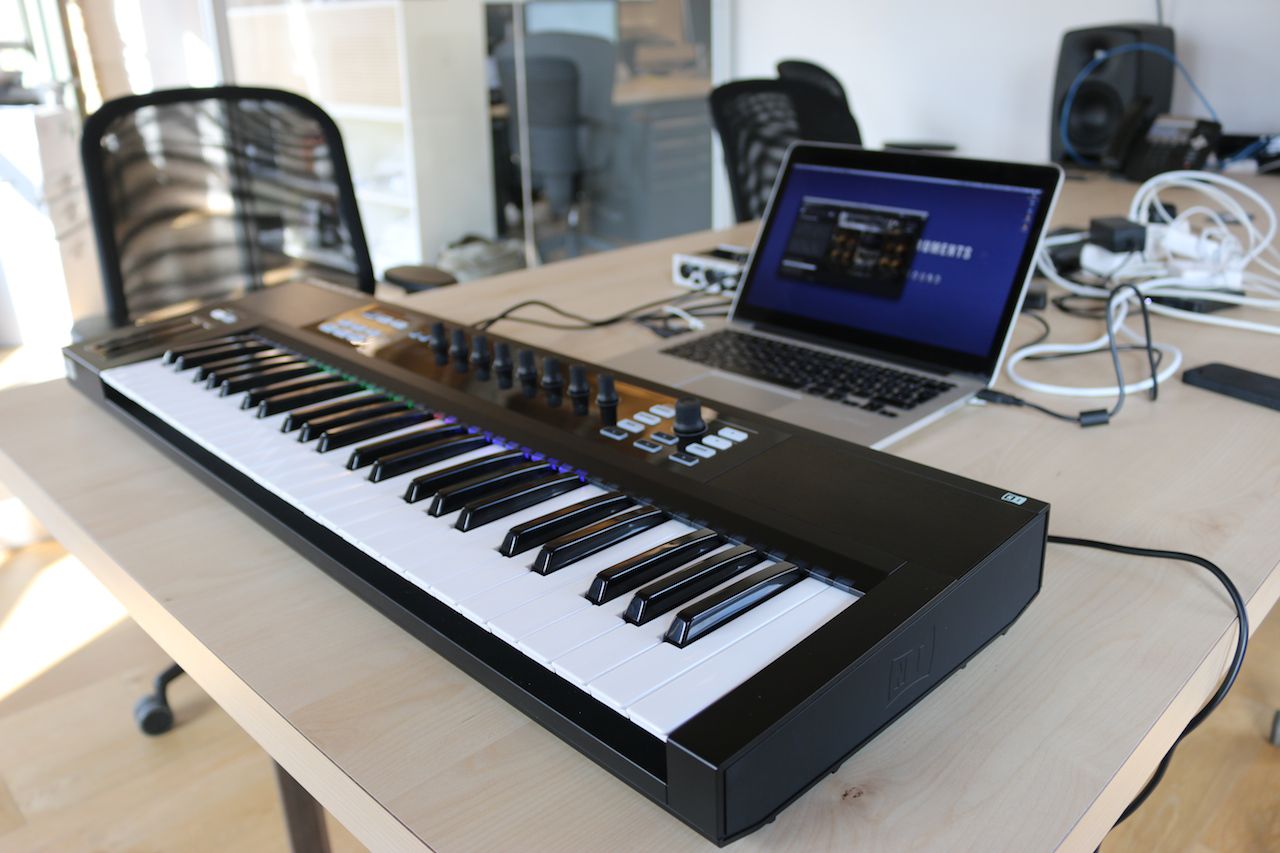 The concept is simple enough. Komplete Kontrol is a two-part system consisting of a USB MIDI keyboard with controls and an application running on your Mac or PC that hosts NI's instruments. It can run in standalone mode or as a plug-in in all major formats, and is built to work optimally with Komplete 10 and also with Komplete 9 when the latest software updates have been applied. It's worth noting that you must own a copy of Komplete 9 or 10: individual Komplete instruments are not supported inside the Kontrol software.

"When you mix Komplete and third party instruments in a session, the keyboard flips between MIDI mode and the Kontrol software automatically."

As with Maschine, although the Komplete Kontrol hardware is designed to integrate seamlessly with NI's software, it can also be switched to MIDI mode to become a more generic MIDI controller. A Controller Editor application is available to allow you to make specific settings for each of the hardware's controls and to save these as templates that can be loaded to control third party instruments. You're really buying into NI's universe if you get one of these, so although generic MIDI control is a nice bonus, it's the integration that you'll probably be most interested in. Helpfully, when you mix Komplete and third party instruments in a session, the keyboard flips between MIDI mode and the Kontrol software automatically when you select a track. 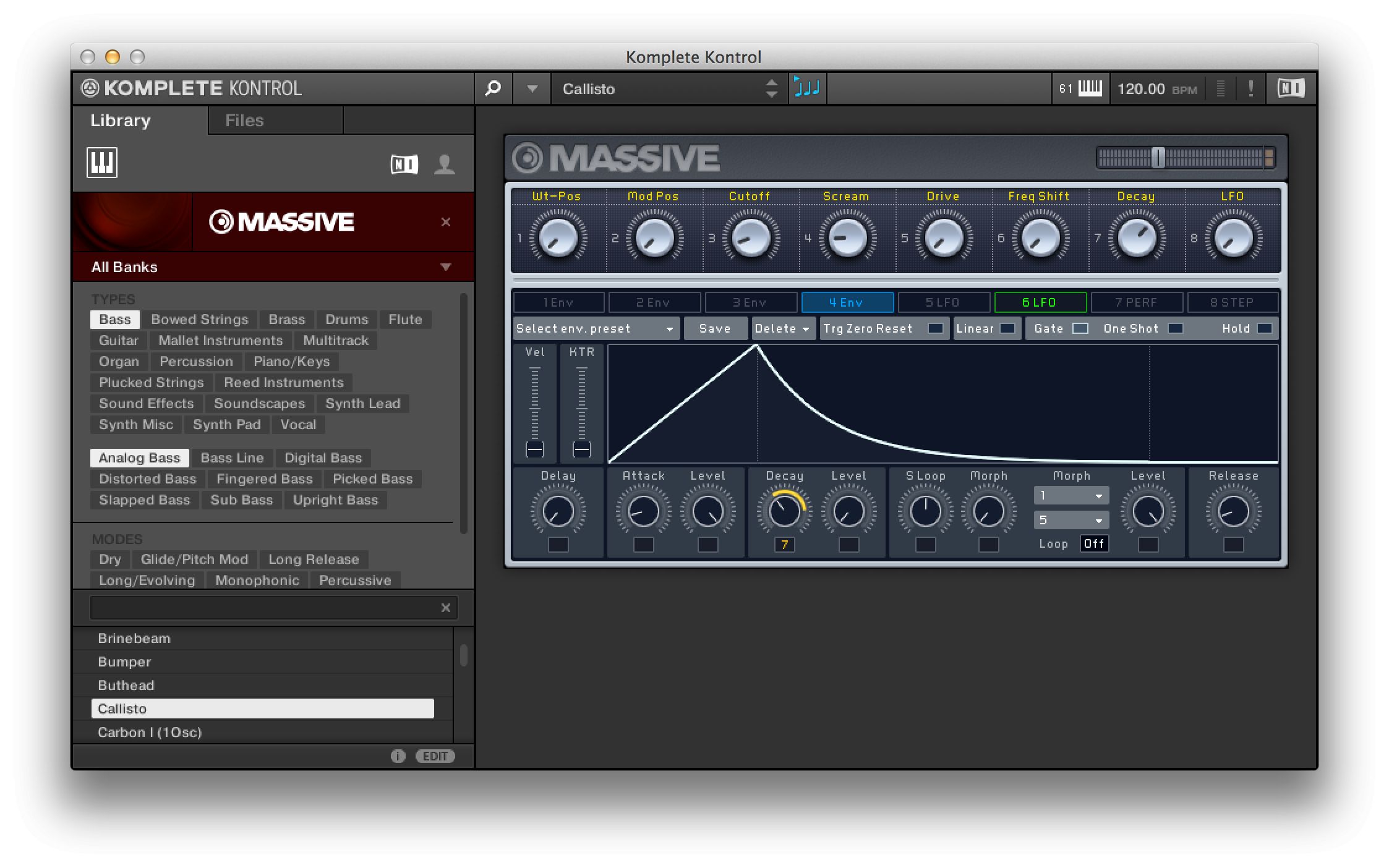 The Komplete software provides the power to the keyboard.

The keyboard comes in three sizes: 25, 49 and 61 keys and all are functionally identical except for the number of keys. I've actually seen all three and my review model was the 61: all are reassuringly solidly built and serious-looking. The design is minimalist and round the back you'll find a power socket and USB port (external power is required), sustain and expression pedal inputs, MIDI I/O 1x1 ports and a Kensington lock port. Communication to your computer is over USB and as ever with Native, the number crunching goes on in the software, not in the hardware. 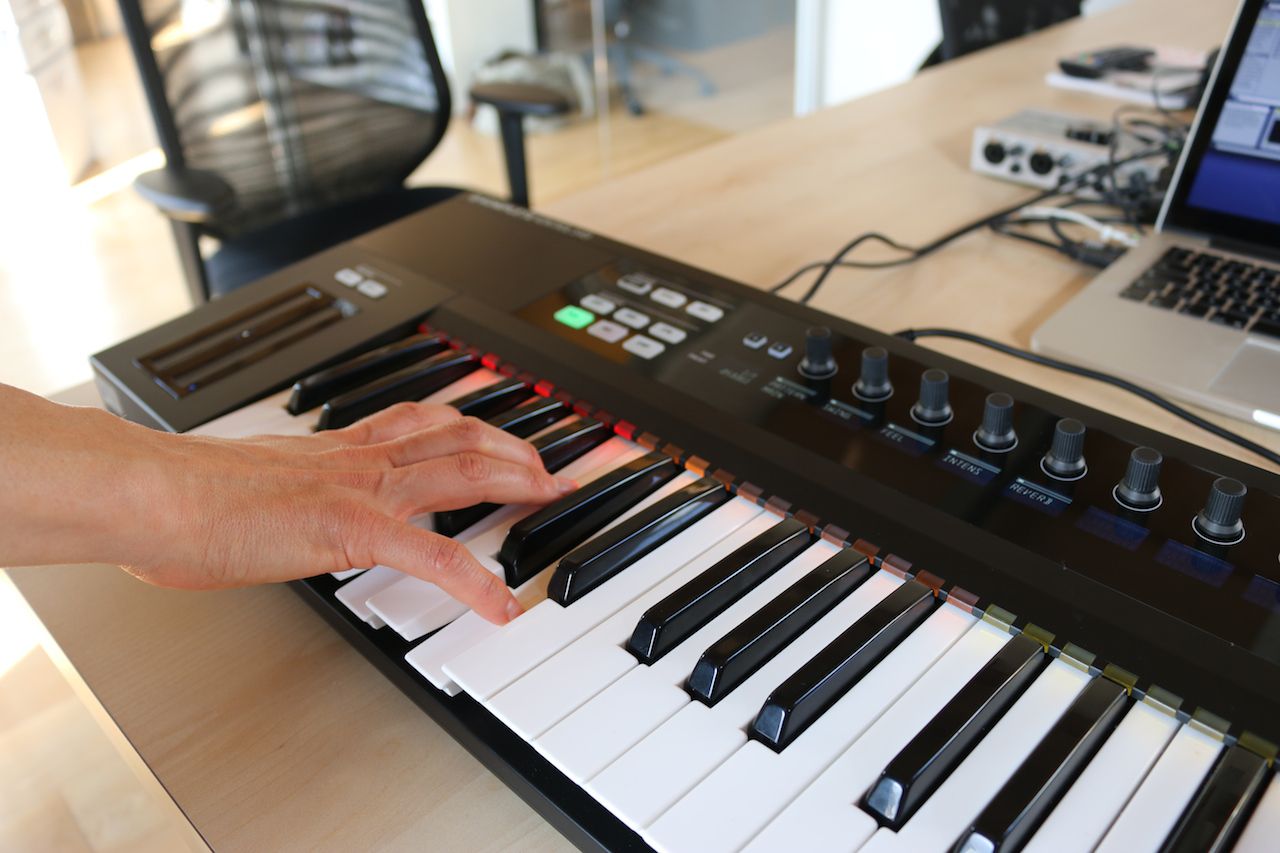 It plays nice too!

The Fatar-designed keybed uses full size, semi-weighted keys and strikes a good balance between synth and piano action. Connect to your computer and fire up the app, and you can use the Navigate section on the keyboard to browse your whole Komplete library. With the arrow keys and data dial it's a breeze to move between instruments and select presets and there's now full tag-based browsing just like in the Maschine software, as well as Back and Enter buttons and preset up/down for cycling between presets. Using tags makes navigating Komplete's vast selection of presets much easier and saves a lot of time.

In the centre of the keyboard are eight endless rotary encoders, each with its own screen. For any NI instrument, parameters are automatically mapped to the hardware (the Native Map system) and multiple pages are available, with the most important parameters on the early pages. The screens are crisp and tell you the current parameter and value, and the knobs are capacitive which means that just by touching them you can display the current value, without having to actually change it to “wake” the display. I'm probably less of a synth tweaker than many people, but even I found the sound shaping workflow here to be just incredible. The hands-on, auto-mapped changing of filter, osc and many other controls was great fun and let me quickly come up with some amazing variations on even simple synth sounds. Everything is available, down to effect types and levels and it really makes sound design an order of magnitude more powerful and accessible than using the mouse.

"I found the sound shaping workflow in Komplete Kontrol to be just incredible." 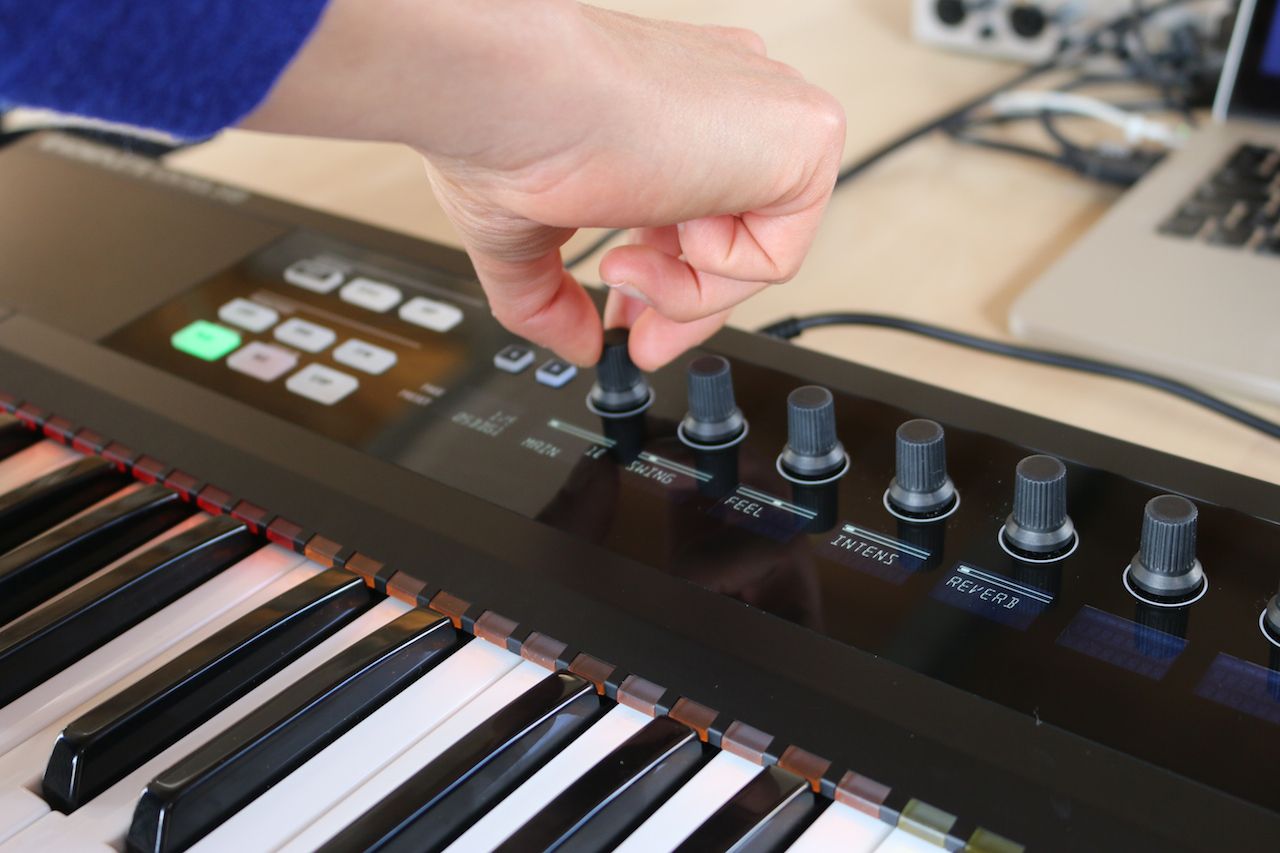 It sounds obvious or simple, but the auto-mapping features are a real game changer.

Let there be lights

The lights on the keybed are another innovation, (NI calls this Light Guide) and fans of Kontakt will be happy to hear that they light up to display the colors of your key maps. So modifier keys, triggers, bank selectors and zones all display on the physical keyboard just like they do in Kontakt, and some of Komplete 10's new instruments use this feature as well so you can perform without having to constantly refer back to the computer screen.

"Komplete Kontrol goes way beyond being just a controller, it also has some stunning performance features."

Komplete Kontrol goes way beyond being just a controller, it also has some stunning performance features. There's a fully programmable arpeggiator and a chord mode, and you can easily set these up and change the way they work using the onboard screens and dials. Again, it's beautifully easy to figure out and use, and playing complex arps and chords is really straightforward. The lights dance up and down the keys and show which chords you're triggering. Root notes display brighter than the others. 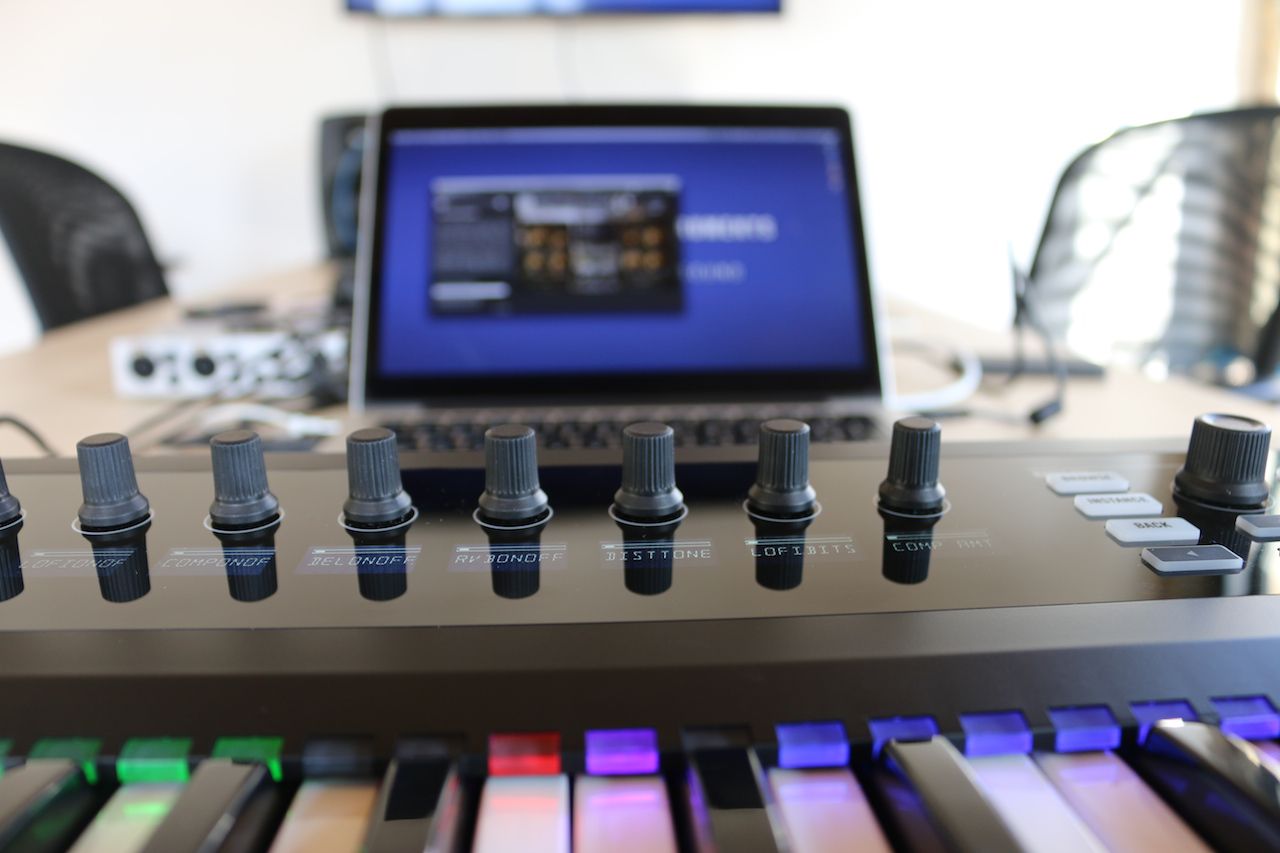 It's got lights... and lights that actually provide functionality you'll find useful!

For less experienced players there are some very enticing features available. Use Scale mode to deactivate all the “wrong” notes for any given scale. Set it to D Major for example, and only the notes in that scale are active, and shown using the lights. The “dead” notes still work, but they play the same note as one either side. Even more mistake-proof is switching to “Easy” key mode, where the “wrong” notes are deactivated entirely so hitting a note that's not part of the selected scale does nothing at all. You can also switch Chord mode on to display specific chords using the lights. Although these features were initially a bit mind-blowing to me as a trained piano player, they would be incredibly useful for anyone learning the keys, or wanting to safeguard a performance against hitting any wrong notes. This scale stuff is really clever, and it's worth watching a video demo to really get a feel for it. 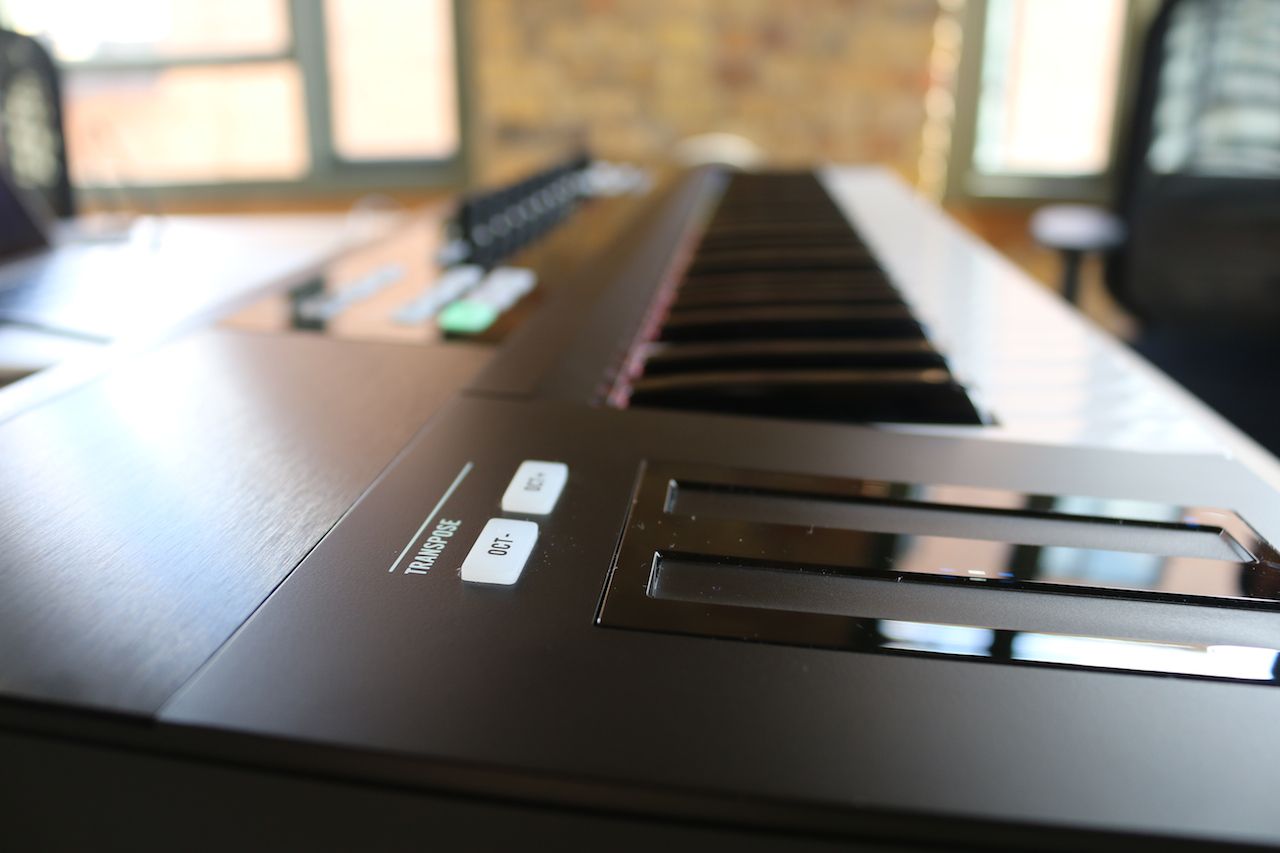 The touch-sensitive pitch and mod strips deserve to be talked about lots and lots.

There are a few more tricks on show, including transport controls for your DAW, and octave up / down buttons on the left side of the unit. There are also touch-sensitive pitch and mod strips with light-based feedback. These can be modified in software, with the pitch strip having tweakable spring strength and the mod strip having standard or ball mode. In ball mode, you can set it off pinging up and down, with adjustable friction and gravity, so you can make a sound modulate up and down, and gradually slow down organically. If this sounds gimmicky, it isn't at all. It's very creative and great fun to use. I didn't miss physical wheels at all. In fact I found these made me more likely to use them.

"The touch-sensitive pitch and mod strips (are) creative and great fun to use."

Watch Hollin show some of his favorite features of Komplete Kontrol in action in this video:

It's not often that I get excited about a controller keyboard, but Komplete Kontrol more than lives up to NI's reputation for seamless hardware and software integration, and sets a new standard for workflow and performance. It's extremely well thought-out and turns patch browsing and sound shaping from a chore into a breeze. The Light Guide and Native Map stuff is just awesome and means that you don't have to be a MIDI expert or even much of a player to really get a lot out of your instruments. If you do want to dig deeper, the controller editor lets you customize maps and use it with third party software and external MIDI hardware.

"The Light Guide and Native Map stuff is just awesome."

It's true that you'll get the most out of Komplete Kontrol when it's paired with the Komplete software bundle, but NI has just given you more of a reason than ever to take the plunge. I'd highly recommend checking it out in the flesh, where you can really grasp what it's capable of.

mistermartin
I worked with the software, not with the keyboard controller. On one side, it is refreshing to look for sounds across all available instruments. On the other side you feel like being lost in a jungle. Say you are looking for specific synth sounds, but you want to avoid the FM8 synthesizer; not possible. You never know which instrument you are going to open, there is no quick preview or overview. A hundred times you end up opening an instrument you do not want to open, for instance that wimpy FM8 again which you want to avoid. This is a huge disadvantage!!!
GTbannah
.... BUT, where are the drawbars?