Language
What if you could have an infinite number of ways to generate sound? NI's Form sample tracking synthesizer might just hold the key'¦

The idea of resynthesis—using samples as the basis of synthesized sound—is not a new one. iZotope’s Iris has been doing it for a while, and it’s generally considered to be a highly creative way to design sounds. Since you are not limited by having a fixed selection of oscillators, the range of sounds you can create using samples is pretty much infinite. That’s not to say that the process has always been the most transparent, but NI’s new Form synth looks set to put a friendlier face on the process. 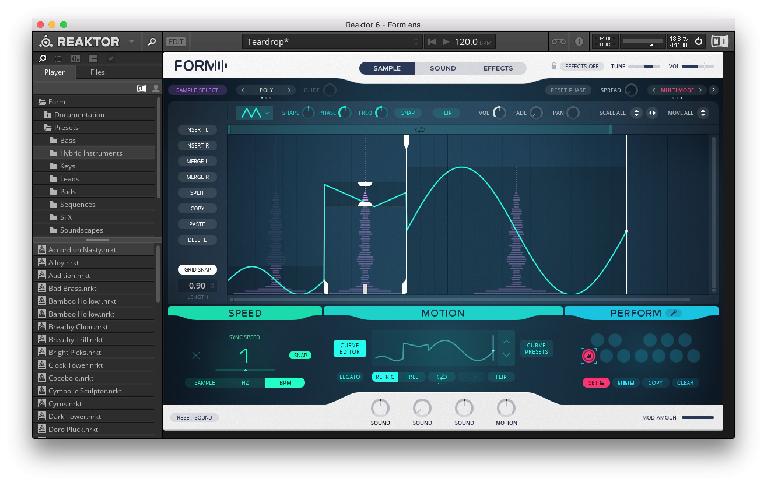 Divide your sample up into regions and process each one differently.

Running in Reaktor 6 (full or free versions), this affordable synth aims to take the mystery out of sample-based synthesis and let you get straight to the important business of crafting your own unique soundscapes. You will probably begin by loading a preset, which will use one of the library samples as the basis for its sounds. You can also drop in any sample of your own of up to 30 seconds in length. Shorter samples of a few seconds are generally better for creating instrument sounds and longer samples for evolving soundscapes, though the tools on offer mean there’s a lot of crossover between these two. What you end up with almost certainly won’t sound like what you started with.

In Single mode you can select a section of the sample to use as the basis of your sound. In Multi mode you can start to split the sample into different regions and apply different settings to each one using the Curve Editor. A practical example of this from NI’s site shows how to virtually divide a vocal sample up and process each part of it to create a robotic, cut-up effect. It’s particularly vivid when used on vocals like this but you can do it for any kind of sound. These areas can be easily modified, merged and copied so it’s really flexible.

Controlling sample playback is at the heart of Form (it’s called a “sample tracking synthesizer”) and you do this using the Speed and Motion sections. The speed and direction of playback can be easily edited: speed as a BPM or Hz value or a factor of the original sample’s speed. The Motion section gives you multiple options including amplitude curve presets that can be quickly punched in to add motion and variation to playback. In the Perform section, you can store snapshots of a processing setup to quickly apply to any sample, and flip between these during a performance. 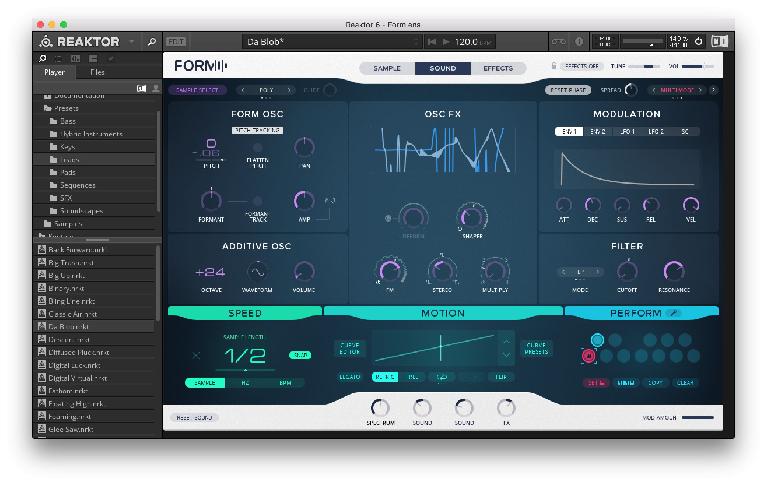 Edit many parameters of the way the sound is shaped.

Jumping to the Sound section, you’ll find a bunch of tools to control the way the sound is processed. Although these might look a little technical, they’re actually pretty intuitive and fun to play around with, and almost every control makes an immediate difference to the way your sound is sculpted. Pitch and formats can be tweaked, and an additive oscillator can alter the harmonic content of a sound. The OSC FX section lets you deform your signal, add frequency modulation, multiply the signal and shape it. A Modulation section lets you choose a source and assign it around the synth to add further movement to the behavior of various sections, plus there’s a filter stage with various filter types for further morphing.

In terms of how you are able to bend and shape your sounds, Form offers a tremendous amount of power and flexibility. As a nice bonus, there’s also a dedicated onboard effects section featuring dynamics, delay and reverb as well as frequency shaping. This last one is particularly interesting as it lets you creatively separate your sound into two frequency bands and then control them independently. Last but not least, a Warmth stage adds some boost and gain to the signal. I found myself using this quite a lot. 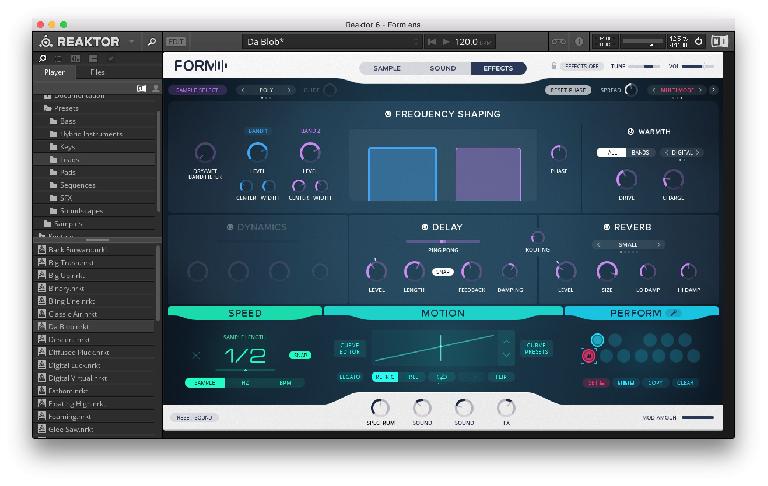 Along the base of the instrument are four quick controls that link to various parameters inside each of the sections and let you make changes en masse to different sets of tools. There’s Spectrum, two for Sound and one for FX and they correspond to specific knobs inside the interface. Changing these controls independently will alter the starting point of that control so you can also tweak them separately and then still move them all as one using a quick control. Various other shortcuts throughout the interface let you reset patches, copy and paste settings and more.

Form is a really interesting synth and, thanks to its use of samples, isn’t constrained by some of the things that might ordinarily apply in a synth with a fixed number of ways to generate sound. With almost unlimited creativity comes a moderate learning curve, but only in the sense that getting a very precise end result requires a bit of time and effort in understanding the curve and modulation tools. It’s just as likely that you will play with a few settings and quickly come up with something totally unique that you would never have thought to aim for otherwise.

Although Form has some patches that are recognizable as conventional synth sounds, its real strength lies in its sheer sonic palette. By cutting up your sample into different regions and applying different amplitude curves and other settings, then changing the way playback happens in any one of myriad strange ways, you can come up with some thrilling and wildly futuristic sounds. Leads and basses are possible but so are weird, evolving and pulsating soundscapes. It’s perfect for atmospheric sound design and will also find a home in any electronic music setup.

The presets are excellent but they’re really only a starting point since everything is so infinitely malleable. Best of all, it’s attractively priced, as many Reaktor-bound synths seem to be. With a clever but approachable interface, powerful but accessible tools and an incredible sound, Form is sure to change the way you approach creating your own, unique sounds.

Cons: A few randomize buttons would have been a nice touch.

Learn how to use FORM in this excellent video course in the AskAudio Academy here.