Language
If you're looking for a physical modeling resonator eurorack module, then you've probably heard of Mutable Instruments Rings. In this in-depth review, we find the sweet spots in this synth module.

Rings from Mutable Instruments is a physical modeling resonator eurorack synth module with a healthy dose of joyful surprises lurking in its patch points and parameters. It’s designed to mimic the resonant behaviour of vibrating bodies like metal bars, plates, strings, and more, with the ability to blend and bend their attributes. Controls are available for Coarse Frequency, Structure, Damping, Brightness and Excitation Position. Each of these parameters has an input with a handy attenuverter to control the amount and polarity of external modulation, making it easy to integrate with other modules.

A while back I had a look at another resonator module from 4MS (you can read my thoughts here). The 4MS Spectral Multiband Resonator works as a collection of six bandpass filters tuned to selectable frequencies with glassy ringing resonance at high Q values. If you’re asking which one to get, I’m afraid in my case the answer was both. 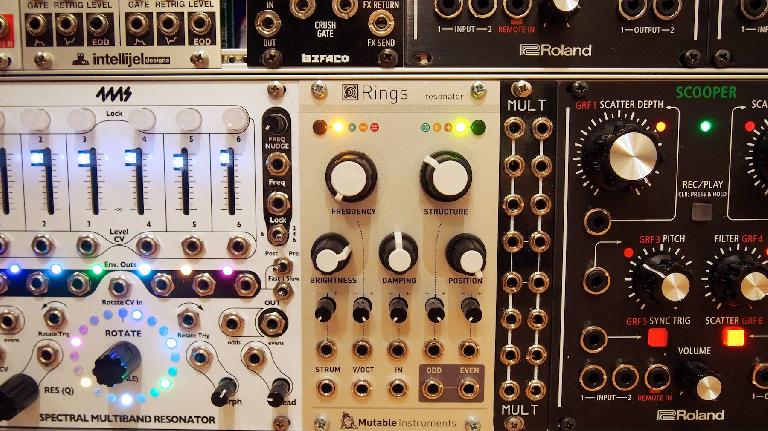 Mutable Instruments has been on my radar for a while now, and I’ve been eager to try Rings for some time. I started my rack with the intention of processing field recordings to layer with my music, hoping to replace what I had been doing in Ableton Live with Resonator, Corpus, and Reaktor. While the SMR is great for extracting musicality out of a noisy source recording, Rings can add lovely tonality and completely transform the source. Rings relies on three pieces of information to operate correctly: 1v/Oct determines the pitch, gate signals to “Strum” tell it when to initiate a new voice, and the audio Input generates the excitation. Without a Strum input, Rings intelligently extracts Strums from transients in the input signal, and it will synthesize an excitation signal without an audio input.

A waterfall recording provided a tasty meal for Rings:

A hydrophone recording of geothermal bubbling for some rhythmic Ringing fun:

At the top of the module are two buttons. The left selects between various “Polyphony” modes. In this case, polyphony refers to how the notes ring out and overlap, or ping pong between the Even and Odd outputs. Pushing the polyphony button cycles between one, two, and four note modes. In one voice, or monophonic mode, the partials are split between the Even and Odd outputs. Additionally, a long press of the polyphony button engages “Threesome” mode; a three-voice mode where the notes alternate between the Odd and Even outputs in an 8-step paradiddle pattern (O E E O E E O E). This is the first of a range of hidden features contained in the module, as each resonator type has an alternate mode and there’s also a hidden easter egg mode.

Rings can even put out a decent bass drum: 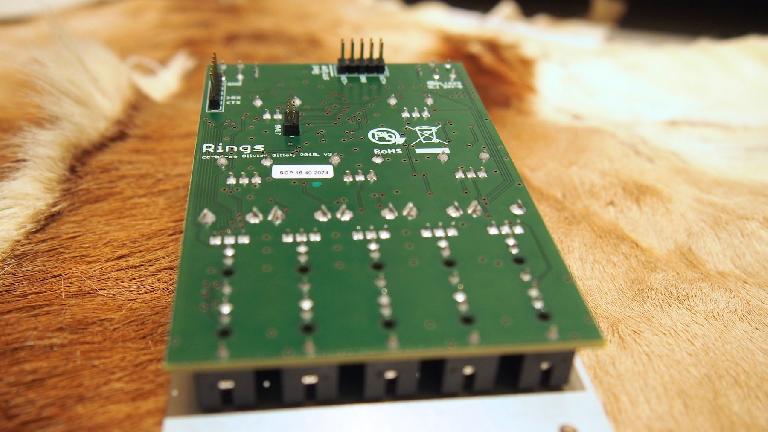 The top right button toggles between the different resonator types. Green is Modal, mimicking the behaviour of vibrating objects. In this mode you can get some lovely metallic chimes, and use the Brightness control to transition from darker, woodier sounds like xylophones, to metallic and then glassier bright tones. The Structure control changes the frequency ratio between partials, and is used to recreate the behavior of bars, strings, and plates with smooth sweeps between these types. Position is meant to determine where the object is being struck, strummed, or otherwise excited. Adjusting this knob often has a similar audible effect to pulse width modulation.

Modal Mode with no audio input:

While in Modal mode if the Resonator Type button is held down, Rings will become a Two Operator FM synth. In this mode, Structure controls the frequency ratio between the operators, Brightness the FM Index, Damping changes both the FM Index along with Amplitude Decay, and Position the Feedback Path with no feedback at 12 O’clock. The audio input goes into an envelope follower that changes the FM Index and Output Amplitude. The FM mode is great for bouncy bass lines, chiptune leads, or wild noisy squelches.

FM Mode with no audio input:

If the resonator mode light is yellow, the Sympathetic Strings setting is active. This mode was made to behave similar to the way a collection of strings respond to neighboring vibrations by adding overtones or undertones, as in a sitar, or sarod. In this mode, the Structure knob controls the frequency ratios between all strings. This can create various frequency arrangements and chordal structures with some really nice plucks or washes of sound.

Sympathetic Strings with no audio input:

A long press on the mode button with Sympathetic Strings active will change rings into “Western Chords” mode. Now the sympathetic strings are tuned to chords instead of fifths and octaves, and the Structure knob changes the assigned chord.

A red light on the Mode setting means the Inharmonic String mode is active. This setting is based on the Karplus Strong technique of sending an excitation signal through a comb filter and an absorption filter. This is meant to mimic the behavior of a string with absorbing bodies attached at either end. For extra fun, Rings adds “a delay-compensated all-pole absorption filter creating more drastic plucking effects, delay time modulation emulating the sound of instruments with a curved bridge (like the sitar or tanpura), and all-pass filters in the delay loop, shifting the position of the partials and recreating the tension of piano string or completely bonkers inharmonic timbres.” In this setting, Structure changes the amount of modulation and detuning of the partials. This is the most wacky and potentially noisy of the three main modes, but it has some awesome musical sweet spots. At some settings it sounded like a digital synth, while at others it added a breathy emphasis or mimicked melodic clay percussion.

Inharmonic Stings alternate mode is “Karplusverb”, which adds a reverb whose absorption and decay follows those of the string. As you crank up the decay, your reverb tails get longer and more lush. Rings is already quite a spacious and full sounding module, but the reverb is definitely a nice touch to add a sense of distance to your patch.

In addition to all of these alternate modes, Rings has an Easter Egg mode called Disastrous Peace. The knobs must be arranged in a particular way, and a clue for this configuration was first released as a poem in the description of a track on SoundCloud. This secret handshake unlocks an Organ/String Machine synth loosely based on the Roland RS-09. The polyphony button sets the chord size from 10-note with no overlapping, to three-note with the ability to overlap. The model button switches between three effects variations; Green for formant filter, Yellow for a Roland-style chorus or Solinaesque ensemble, and Red for “Caveman Reverb”. Frequency now sets the root note, Structure the chord type, Position the effect amount, and damping will create a constant drone when fully Clockwise. Brightness scans through a variety of registrations, or combinations of gain settings for the oscillators, arranged from darkest to brightest. It’s amazing that a feature this rich was just thrown in. It’s very powerful to be able to produce these full, chordal tones from such a small module with basic but effective and musical controls. 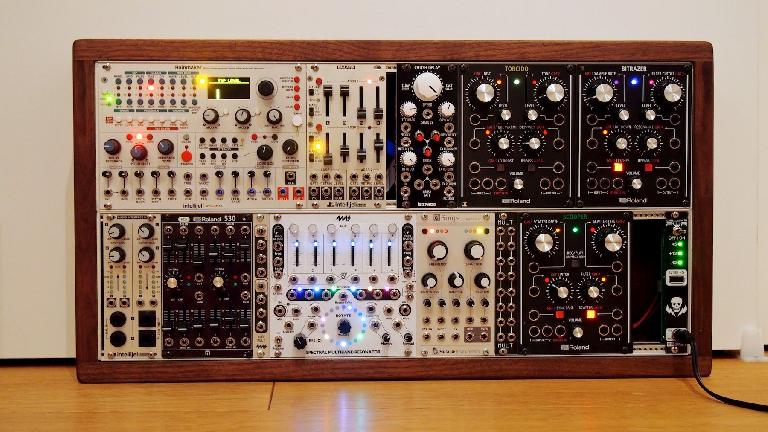 Use this knob arrangement and a long press of either button to activate the Rings Easter Egg: Disastrous Peace.

I had a lot of fun running a drum loop through the Rings. The transient detection on the audio input is fantastic with dynamic rhythmic material. For each of these examples I started with everything fully counterclockwise, except for the Frequency which was dead center. I then brought up the brightness and damping before sweeping through the Structure and Position ranges. In some cases I added a simple slow two-note melody and in the last one I used some drum gates to strum a rhythm. I used the same drum loop for each example, and you can hear the original unaffected version first. 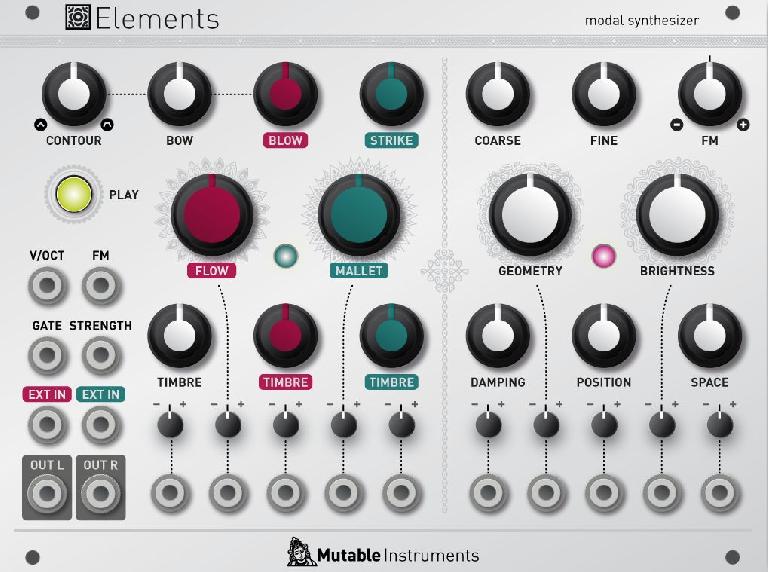 It’s necessary to mention that Mutable Instruments has another module with some overlap in functionality. Elements is also based on physical modeling of vibrating structures, but in this case, extra emphasis is put on the excitation stage. It is able to synthesize excitation in the form of bowing, blowing, and/or striking with the ability to blend and control these virtual techniques. Elements also has a dedicated reverb. It has a Resonator as its right half, with all of the same resonator types as Rings available through a firmware update. Elements has two inputs for the resonator, one of which passes through a granulator and VCA before hitting the resonator. Of course because it’s a bigger module it also has a more expensive price tag at $539 instead of $359 for Rings. In my case I was more interested in the added control of the resonator type because I planned to mainly use it as an effect, so that drew me to Rings. There’s enough differences to make them both excellent worthwhile modules, and I have friends who are happy having both. 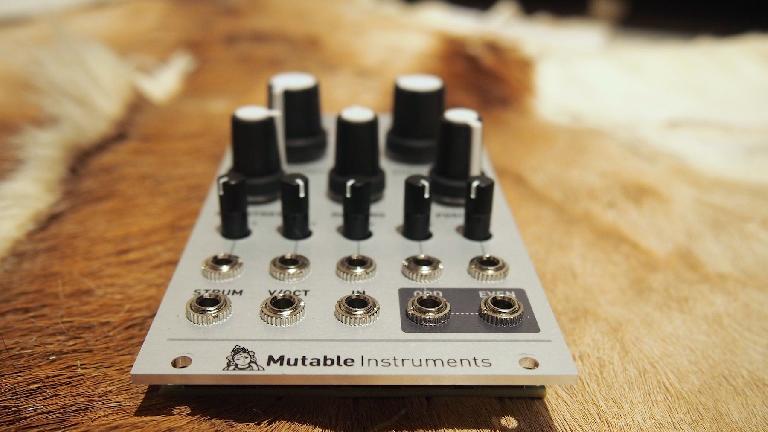 Rings definitely lived up to my expectations, and actually blew them away. It really is a joy to play with, whether you’re using the internal sounds or running something else through it. For the size and price, Rings offers a huge level of flexibility. The alternate modes are not just thrown in gimmicks, but compelling useful additions. I started using Rings thinking it was a pretty specific niche product perfect for my system, but I really think any rack would benefit from having it as part of the arsenal.

Pros: Works as a sound source or an audio processor, Full deep bass and a bright glassy top end, Very musical and easy to find sweet spots, Attenuverters on each CV input, Alternate modes and an easter egg add even more flexibility.

Cons: Mono input, A temptation to want to use it on everything.