Language
It might not be new, but the Moog Slim Phatty still draws gasps of admiration from musicians everywhere. Mo Volans digs into this modern classic by Moog to find out how it stacks up.

It's been a few years since the release of the Slim Phatty but due to the release of so many Analogue mono machines recently, I thought it might be a good idea to revisit this modern classic.

Let's take a closer look at this little analog monster and see if it's still the best bang for your buck or if the competition has knocked it off the top spot.

Before I get into this synths capabilities I'll give you a bit of background. I actually used to own the Slim Phatty's big brother (The Little Phatty) and have recently had the Slim on loan from Moog for about 3 or 4 weeks. It's truly been put through its paces as part of my new Reason 7 tutorials.

I've also owned and used mono synths from just about everyone you can think of including Dave Smith, Korg, Roland, Arturia and even other Moogs. With all this in mind, I thought I was in a good position to type up a bit of a 're-review' of the Slim Phatty and perhaps compare it to some of the other contenders. 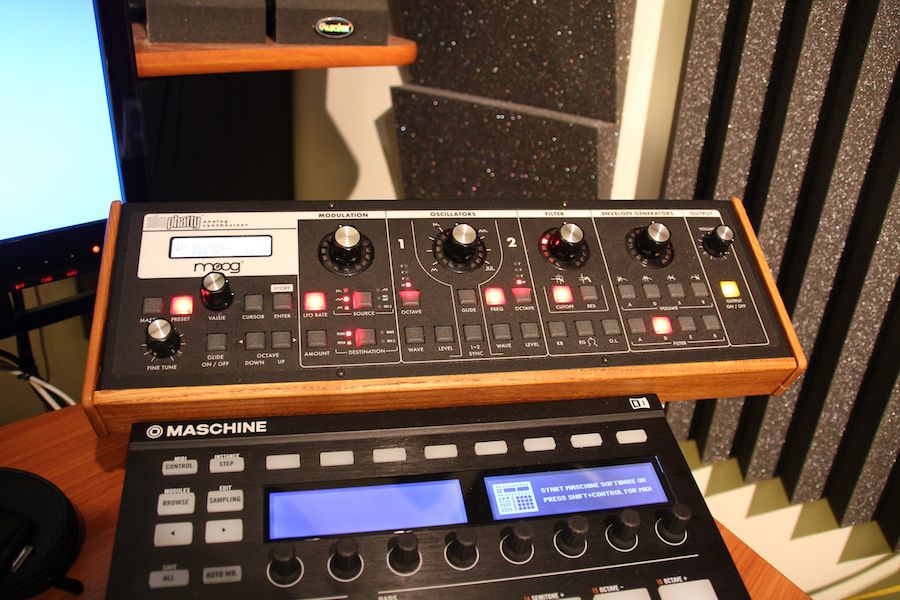 (Pic 1) The Moog fitted nicely into my desktop setup.

Add to all of this the fact that there have been a pretty large amount of new Analog synth releases of late and we have the perfect environment to see if the Phatty still has what it takes to keep its head above water.

Obviously, the most important aspect of any synth is how it sounds but before we talk about the Phatty's sonic prowess, let's first look at how it performs when it comes to connectivity.

All of the mono synths that are arriving on the market at the minute feature very (very) basic features when it comes to MIDI and audio. For example the new Korg MS-20 Mini sounds great and does feature USB MIDI but simply allows MIDI in and transmits no controller data. Other synths, such as Dave Smith's Mopho, offer a more complete MIDI spec, and audio inputs, but have no USB.

It seems there is usually a compromise somewhere along the line. The Slim Phatty however doesn't seem to skimp in any area. Although it does only sport a Mono audio output, it features USB (and standard) MIDI connections, audio in and out, headphone out and even CV/Gate connections.

Another feature is that the Phatty transmits every major control as MIDI controller data. This extra connectivity may be down to the fact the Phattys retailed for a substantially higher amount, on their release, than you can find them for now.

With the Slim coming in at  under £700 now this puts it firmly in the grasp of the entry level synthesist and right in the same price bracket as most of the new product releases we've mentioned previously.

One of the first things you'll probably notice about any of the Moog Phattys is the fact they only have a handful of knobs on the front panel. The Slim Phatty has a total of 4 main controls and three other smaller knobs.

The reason that Moog have got away with this is due to the fact they implemented a rather clever multi function control system. Usually this sort of system sets alarm bells for me but Moog have implemented it perfectly. 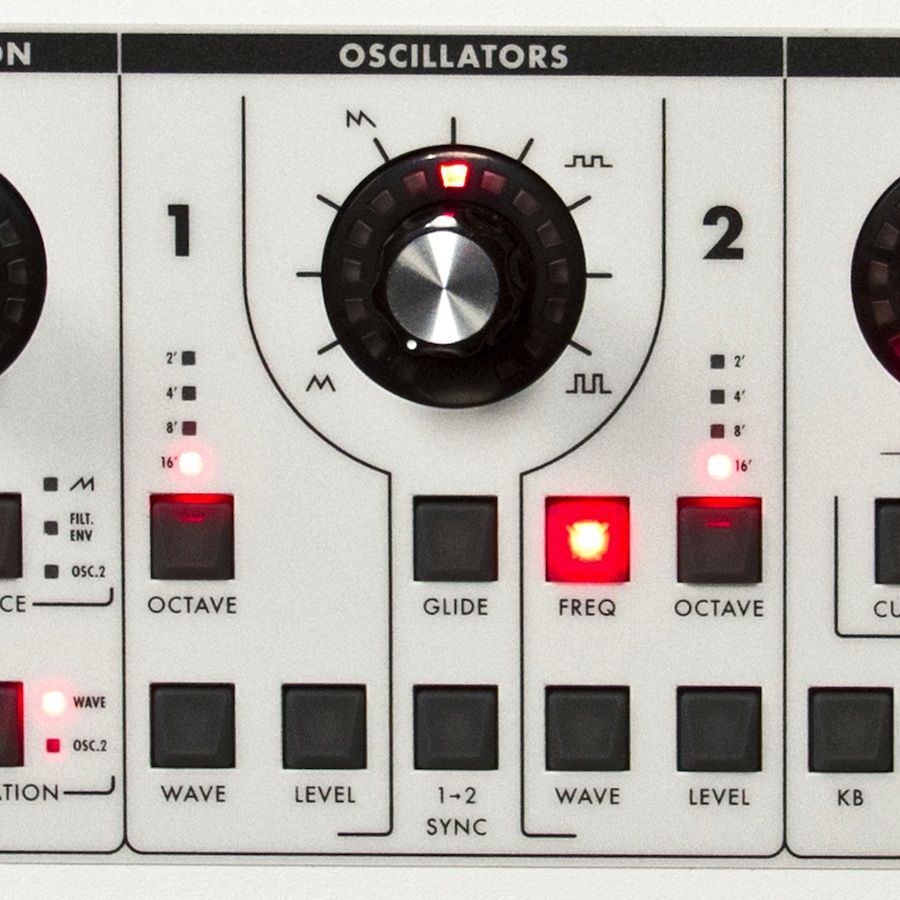 Another nice feature here is that although the knobs are not endlessly rotating, they feature an LED surround. This lets you know the position of the knob pre adjustment and gives you a great way of seeing the currently selected value, even if the knob has been moved.

All in all this is a very slick system. It's worth remembering that all of these knobs, no matter which parameter they are controlling, will send out MIDI controller information to your DAW. This is sent out via the traditional DIN sockets or the USB MIDI port. A simply awesome feature for recording your tweaks.

It's also worth mentioning that Moog supply an AU/VST plug-in that acts as a virtual control interface for the Phatty range. This is implemented over USB and is available from their site for around $70. Pretty cool and works very well. 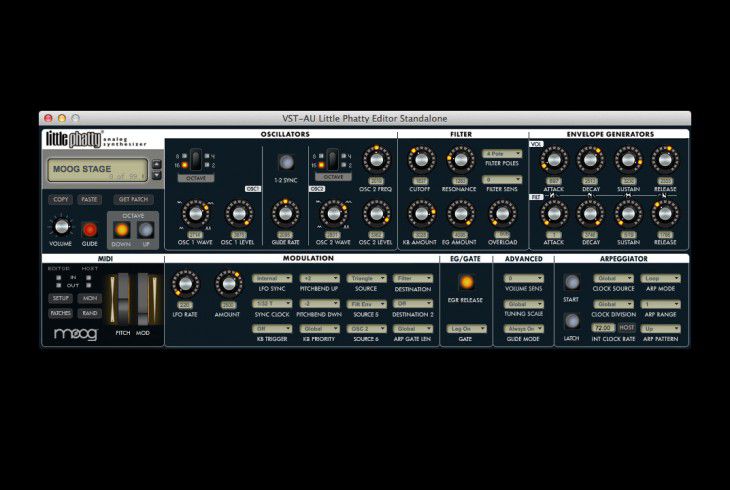 Most people don't buy a Moog for the operating system, amount of outputs or its flashy lights. They buy it for one reason, the fat, fuzzy sound it makes. The Slim Phatty doesn't disappoint in this area and sound... well great.

You get two oscillators here both capable of everything from a smooth triangular wave to crunchy saws and squares. There are also sync and glide options for extra expression and edge.

The oscillators are great, but the real star of the show is the classic Moog ladder filter. Sadly, it's a fixed low pass model, but its rich harmonic output more than makes up for the lack of other modes.

When it comes to modulation, there are also a fair few options for such a compact synth. Two independent envelopes are used for the amp and filter. There is also a fully featured LFO that can be assigned to a variety of destinations. The LFO can be synced to incoming MIDI clock, and during my tests the results were surprisingly tight.

An internal arpeggiator has also been introduced in one of the more recent OS updates. This can also be synced to incoming MIDI clock. In latch mode, I found this the perfect way to audition patches and tweak parameters.

With enough change from £700 to buy a round of drinks, the Slim represents extremely good bang for your buck. Although it's a few years old, forward thinking design and regular updates have kept it at the top of the pile when it comes to entry level analog mono synths.

I'd love to see an updated version with a stereo output, some basic analog effects and dual LFOs. Even if a new version of the Phatty doesn't materialize, this is about the best way to get that legendary Moog sound into your studio.