Language
The Minimoog Model D Reissue has received a lot of attention and brief, hands-on demos across the web. But we've decided to give this powerful classic analog synthesizer a real-world review & video.

It’s the year 2016 and mankind has finally invented the time machine! Well, if you consider being able to purchase a synthesizer from 1970, brand new in 2016. Say hello to the Minimoog Model D Reissue.

Now this reissue is not an exact replica of the original Minimoog as there are some additional features that have been added, which makes this synth even better than the original. So, to rephrase my initial statement. Imagine being able to purchase a classic synth from 1970 with an LFO, some additional routing capabilities and also MIDI.

Now some people are disappointed that this reissue is not an exact replica of the original (feature-wise), but personally I like the additional features as it makes it a much more powerful synth than the original. The main essence of the original is maintained as Moog probably had to use a time machine to source out parts that were used in the original back in the late 1960–1970s. No change has been made to the original sound engine or audio signal path so this still sounds like a classic Minimoog. 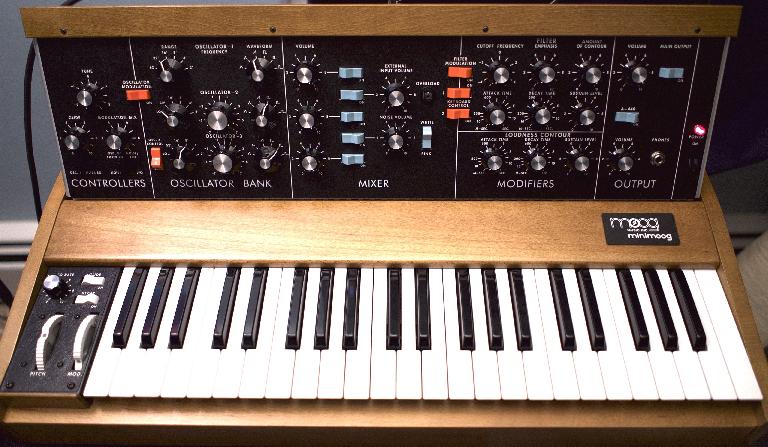 The original Minimoog was a 3 oscillator synth with a noise generator and an external input. These sources would then go through the legendary lowpass ladder filter which had a basic ADS filter cutoff envelope as well as an ADS amp envelope. There was no LFO but the 3rd oscillator could be set to a low mode which could then be routed to modulate the pitch and filter cutoff. That was pretty much it. For today’s standard this may seem like quite a limiting mono synth, but that was the idea behind the design. Prior to the Minimoog, the other synth that Moog manufactured was the massive modular systems. Bill Hemsath’s ingenious idea to put together a compact portable system using scrap parts not being used on the bigger modular systems to create the Model A version of the Minimoog was liked a lot by Robert Moog and the rest as they say is history. It became the first portable keyboard synthesizer. Musicians could relate to it, not be intimidated by it and get a fantastic sound out of it even if they knew little to nothing about synthesis. Till today, people swear by this synth.

Watch our video demo of the Minimoog Model D in action:

New in the Reissue

As I mentioned earlier, the reissue has the exact same sound engine but there are some additional features. The biggest being that it has a dedicated LFO. The LFO can be set to a triangle or a square shape. There is a dedicated rate dial for the LFO right above the pitch wheel. By default it’s set to the triangle shape but you can pull the rate knob up a little and switch to the square shape. The 3rd oscillator can still be used as an LFO so any classic patches that used this configuration can be recreated. 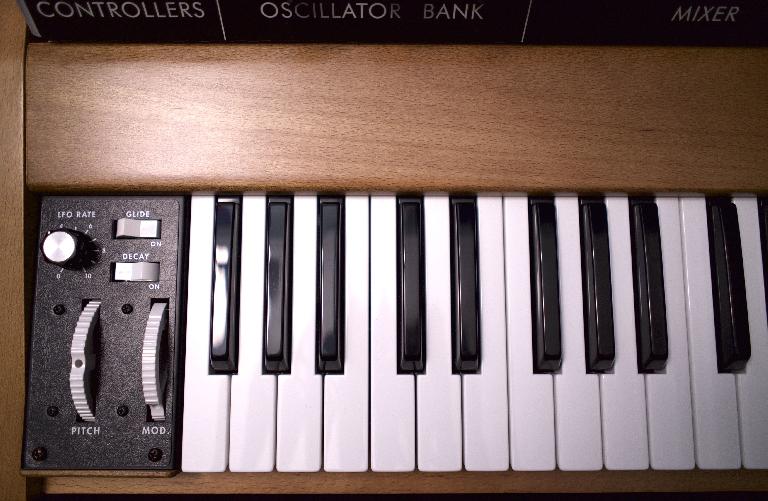 The second big feature is that the filter envelope can be used to modulate the pitch. This is key for synthesizing percussion sounds or even for doing pitched risers and SFX. 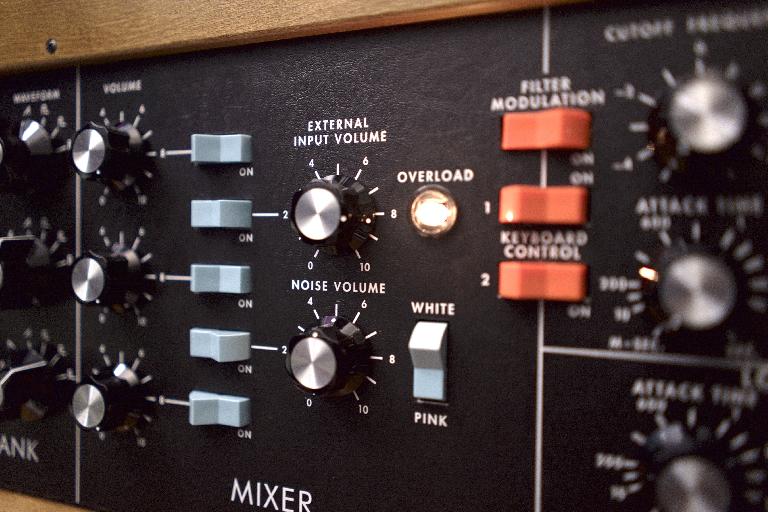 The keyboard is a new Fatar TP-9 model which can transmit velocity as well as after touch control voltages. By default this does not work but there are outputs at the back of the unit for both velocity and aftertouch. These CV outputs are accompanied by trim pots to control the voltage range.

There is now a built-in MIDI interface albeit a very basic implementation of it. None of the pots send MIDI CC data. There are 5-pin DIN connectors for MIDI in, out and thru. No USB MIDI which disappointed me a bit as it’s so much more convenient to use USB cables than those 5-pin DIN cables. 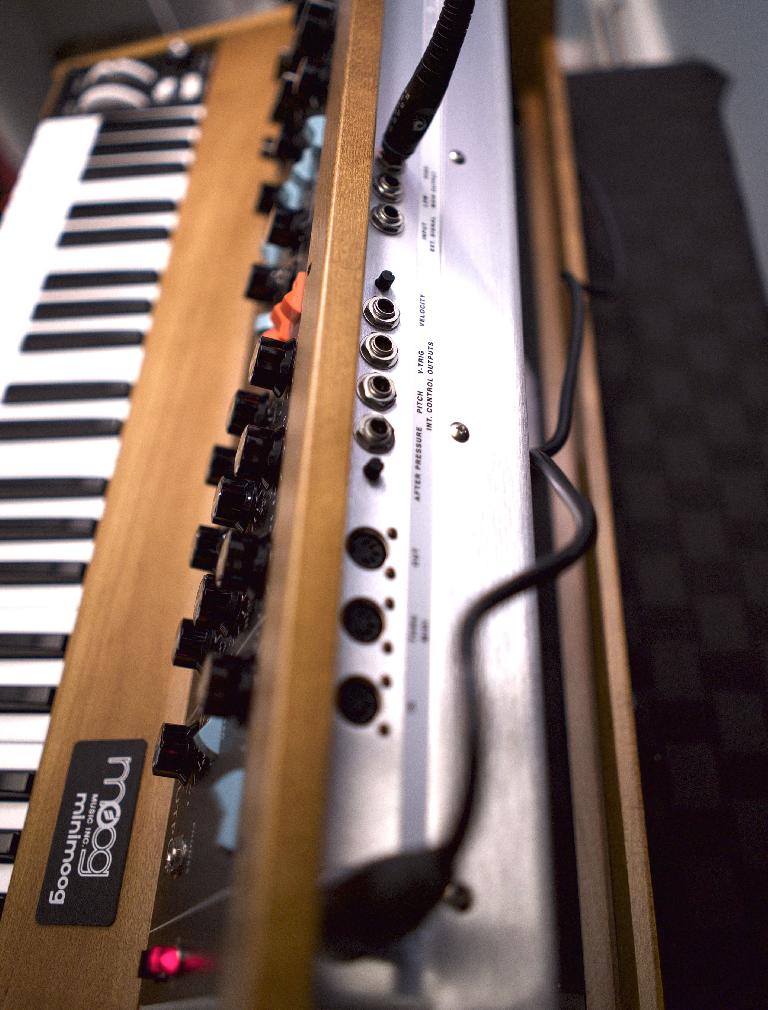 The power supply is now external which makes the unit itself a bit lighter and cooler.

There are additional global commands for setting MIDI channel note priority, transposition etc., which can be accessed by holding down specific notes and powering ON the synth.

I don’t think anyone has ever doubted the richness and sonic quality of the original Minimoog. It's a legendary sound that was heard in pop, jazz, funk and rock music throughout the ’70s and is still heard today in all kinds of genres. Check out Disclosure’s Moog for Love EP.

After recording the audio from the Minimoog, I did notice a DC offset being applied on some parts. It wasn’t consistent but was visually noticeable in the waveform, especially when just using 1 oscillator. Now I’ve noticed this on many other analog synths so it could be an inherent issue, which does not affect the sound so much but in a mix, it could create headroom issues. DC offset can be solved pretty easily in the software domain without compromising the quality so this is not a big issue. 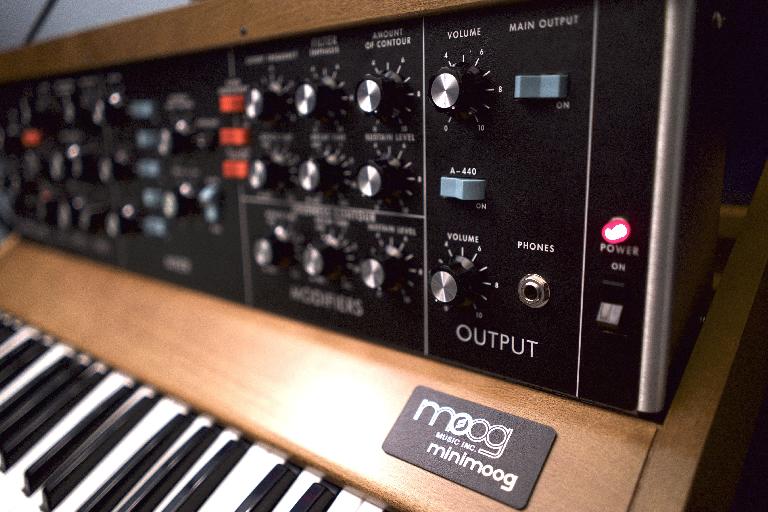 The Minimoog is known for its legendary sound and Model D reissue continues the tradition.

This is just one oscillator set to a sawtooth with the filter completely open and no resonance (emphasis).

This is two oscillators, both sawtooth shapes with the second tuned to a fifth above, again with no filtering.

This is all three sawtooth oscillators, with one a fifth above and one below. No filtering.

This is the same set of three oscillators, with some noise and feedback going through the filter which is manually swept. Each successive sweep has the resonance higher with the last one having full resonance. Watch out for those high frequencies when the resonance is up. 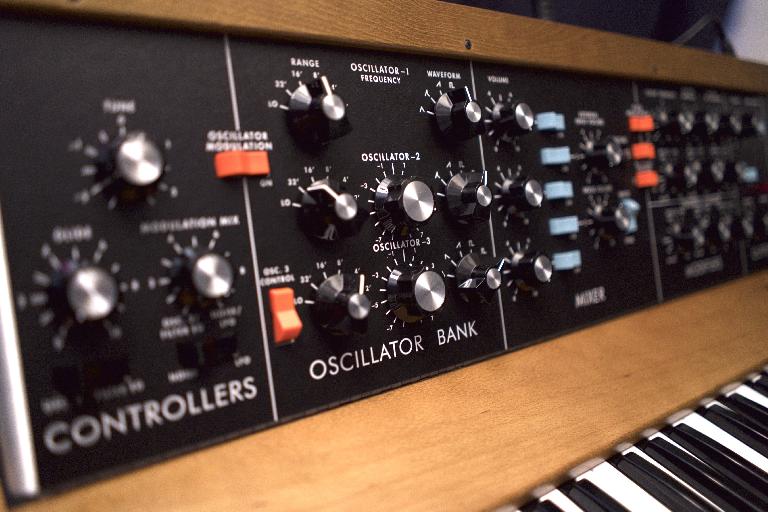 A lot of people might be comparing the Minimoog reissue with the original hardware but I thought it might be more interesting to compare it with Monark from Native Instruments which might just be the best software emulation of the Minimoog yet (author’s opinion).

When comparing the waveforms from each it looks like the triangle shapes are pretty much identical but the sawtooth and square are a bit sharp on the edges on the Minimoog while the Monark shapes look more clean. It’s very subtle but these little things can add up, especially when all three oscillators are used. 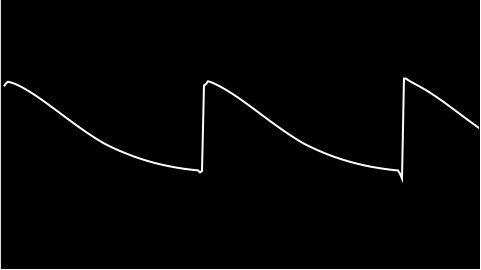 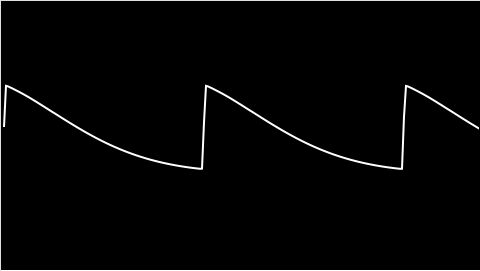 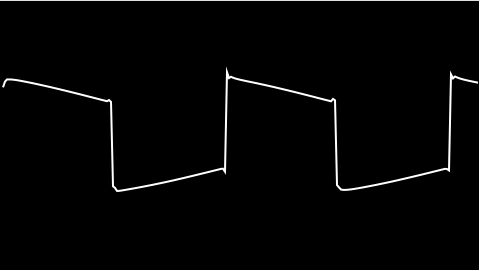 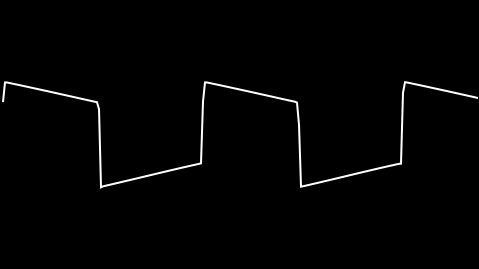 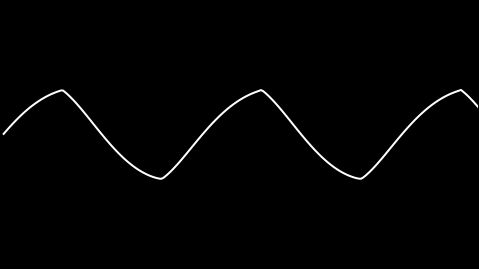 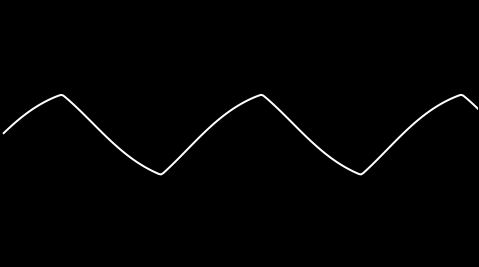 For the audio examples, I have decided to not label them. This could be a good exercise in differentiating between the software and hardware. Try and see if you can guess which one is the hardware and which one is the software. For some of you this might be quite obvious, but if it isn’t, don’t fret. It just shows how good digital technology is today. 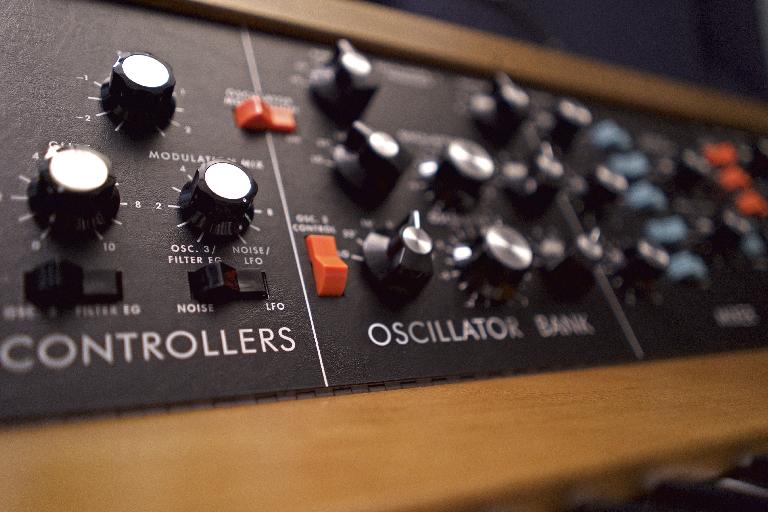 It is a bit hard to recommend the Minimoog Model D reissue for purchase. It is not a cheap synth. It’s probably one of the most expensive mono synths in the market. But despite the hefty price tag, this synth will be purchased by many. It might just be a nostalgia thing, it might even become a collector’s item thing or as it is in my case, it might be a curiosity to experience something a lot of old people keep raving about. I wasn’t even born when this synth was originally released but now I can experience that same analog goodness from the Minimoog that everyone swears by and not have to spend almost $10,000 for a used and abused ‘vintage’ version from eBay.

Besides these scenarios, it’s really hard to justify a purchase of this magnitude. It’s a bulky design compared to some of the newer designs even from Moog themselves (compare with Sub37). It has way less features compared to almost every comparable analog mono synth.

Think about this, the Minimoog costs $3499 while Native Instruments Monark costs $99. Is the Minimoog really worth $3400 more? Some might say yes, but personally for the cost difference I couldn't really justify purchasing it.

For me, the Minimoog is to synthesizers what the Roland TR 808 is to electronic drums. Everyone has software emulations or samples of both but the people who have the hardware have the hardware!

Pros: It sounds like a Minimoog (after all, it is a Minimoog). More features compared to the original.