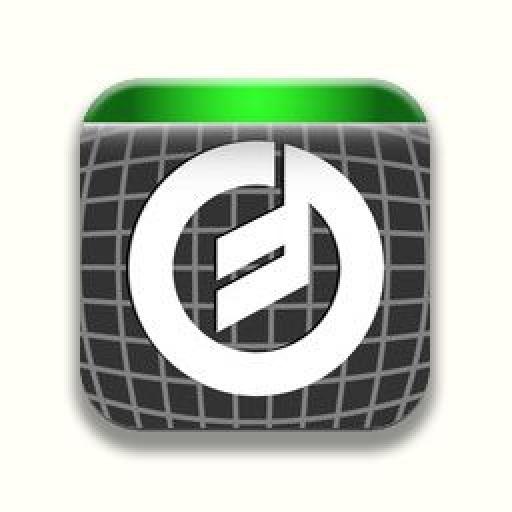 Language
Moog releasing Animoog for iPad has created a lot of buzz amongst iPad-wielding musicians. Richard Lainhart delves in deeply, as only experienced synthesists can, to discover how special this app is.

On October 17, 2011, Moog Music released Animoog, a music app described as "the first professional polyphonic synthesizer designed exclusively for the iPad". Whether or not Animoog is in fact the first professional iPad synth is arguable (and that statement certainly has been argued about since the release), but any new music technology from Moog is worth taking a look at. In this review, that's just what we'll do.

When you first launch Animoog, you'll see a display with a large X/Y Pad dominating the screen, a keyboard along the bottom, and some classic Moog-style modules on the right. Triggering the keyboard produces one or more tones (I'm using the Afterbuzz preset here:  just tap the Presets list under the X/Y Pad to chose one), which by default displays a waveform of the tones and some colored rotating orbital "comets": 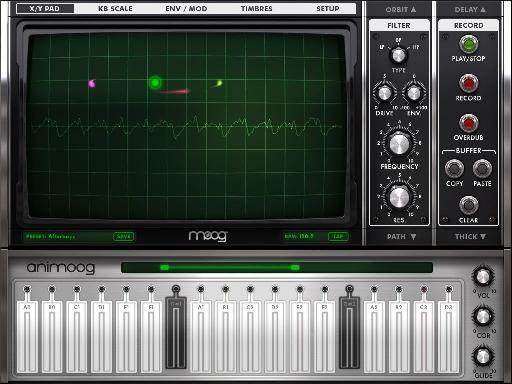 Playing this preset reveals that the keyboard along the bottom, styled after the touchplate keyboards found in some early modular synths, lets you slide from note to note and add a manual vibrato to the tones, somewhat like the Haken Continuum, as well as slide along the length of the key to add another level of expression. The keyboard is polyphonic, with individual finger control over each note. In this example, still using the Afterbuzz preset, I'm playing a low drone and improvising over it, gliding between the notes in a very organic and expressive way:

You can also hear the notes getting brighter as I slide my finger along the length of each key (on the Y axis), which in this case opens and closes a filter. This expressivity makes Animoog a joy to play, and you can spend hours just improvising with the more than 60 preset sounds available. They all take advantage of this two-dimensional keyboard in different ways. And you're not limited to just this one exotic scale: tapping the KB SCALE button above the grid lets you change the keyboard to a standard black-and-white chromatic scale, if you like, or one of a wide range of pentatonic, modal, and non-Western scales, as well as setting the root note of the scale. Dragging the handles of the green bar directly above the keyboard lets you change the overall range of the keyboard and the number of notes displayed.

But there's much more to Animoog than just the presets, as you'll see when you dig under the hood a bit.

Moog describes Animoog as powered by their new Anisotropic Synth Engine (ASE). Anisotropy means "being directionally dependent" (wood, for example, is anisotropic in that it's easier to split along the grain than against the grain). In this case, it refers to the main way Animoog generates timbres. Unlike the standard analog subtractive synth model, where you start with a basic static oscillator, then filter it, modulate its amplitude, and so on, Animoog generates its basic timbres by starting with wavetables, essentially short samples of synthesizer sounds, which may be static or changing internally. Moog calls these Timbres. These Timbres are then stacked in groups to make a grid of different tonalities you can navigate through, either manually or automatically, to create complex tone color changes over time.

For example, if we load the Afterbuzz preset and tap the TIMBRES button above the grid (the X/Y Pad), you'll see a list of eight Timbres in slots on the left, with a much longer list of available Timbres on the right: 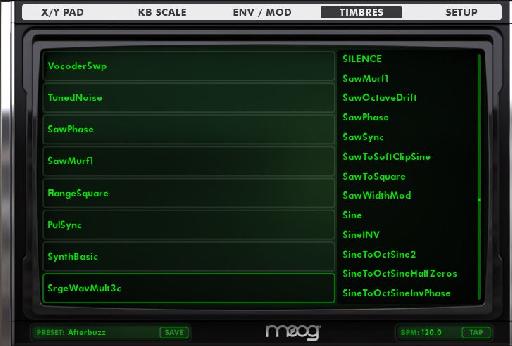 The eight Timbres on the left correspond to the eight horizontal rows of cells in the X/Y Pad grid, top to bottom. Tapping a Timbre previews it, tap one on the left to select it, then tap one on the right to load it into the selected slot. Referring back to Figure 2 above, the bright green spot in the grid (called the voice location) corresponds to the currently active Timbre. In this case, we're hearing mostly Timbre 3 (Saw Phase) with a little of Timbre 2 (TunedNoise). If I manually drag that green voice location spot around in the grid while playing, you'll hear the sound smoothly morph from one Timbre to another, depending on the position of the spot:

Dragging vertically morphs between the Timbres, dragging horizontally slides you (in a sense) through the current Timbre, so that if it's an evolving Timbre, you can play different parts of that evolving sound directly. Dragging in the X and Y axes together both morphs and slides. It's a wonderfully interactive way to create complex changing timbres.

The real strength of the ASE however, comes when you automate the changing timbres, which is where the "directionally dependent" part of the engine makes an appearance. If you load a preset like "Analogwobbulator", you'll see an angled path in the X/Y Pad. And if  you play a single note, you'll see that the "comet" representing that note follows along the path, sweeping through the grid as it goes and morphing and sliding between the loaded Timbres: 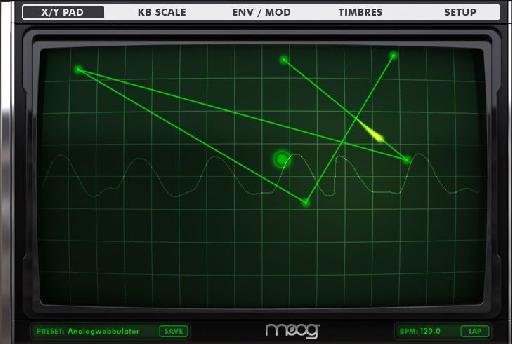 You can drag the voice location dot in the grid to offset this Timbre path to a different location in the grid, and your notes will still follow the path, but through a different group of Timbres.

You can also edit the path points by selecting the PATH module on the right (tap the arrows at the top of the lefthand module group), tapping the Edit button, and then dragging individual points to new locations. Tapping in the grid lets you add new points to the path. The RATE control in the PATH module sets the speed of the note's journey along the path, and consequently how quickly the timbres change. The MODE control tells the note to loop along the path, to ping-pong, or travel once and stop. You can have paths of up to 15 points, so quite complex shapes are possible. 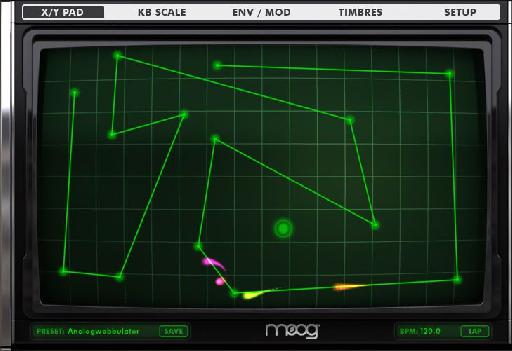 It's all something like the various Vector Synthesis technologies found in certain keyboard synths of the 80s and 90s, and it's a very powerful technique for generating organic shifting timbres that really can't be created any other way. Moog is to be applauded for incorporating this synthesis technology in an iPad-level synth, and giving it such a friendly and easy-to-use graphical interface.

Beyond the complexities of the Timbre Grid, Moog has also included some more familiar synthesis features: a multi-mode filter; amplitude, filter, and modulation envelopes; an LFO, as well as the ability to control Animoog parameters with external MIDI controllers. You can get to through all of those through the ENV/MOD tab: 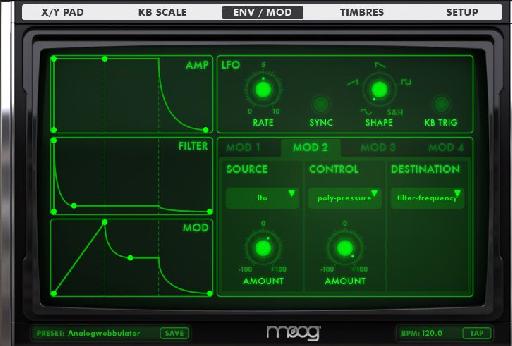 You change the envelope shapes by dragging the breakpoints in the envelope curves. These can be a little hard to grab at this size, so in a nice touch, Moog lets you zoom an envelope to the full window size by double-tapping it: 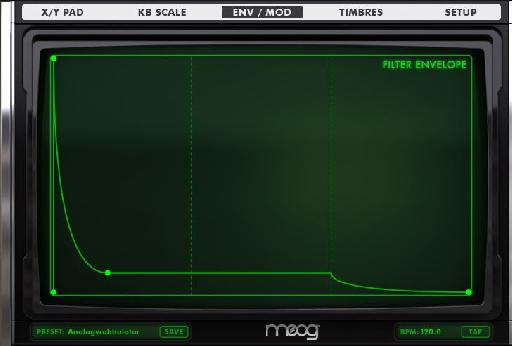 As mentioned, Animoog supports the iOS CoreMIDI standard, so any USB controller or external MIDI interface that supports CoreMIDI can control it. Animoog isn't multi-timbral however, and only responds to one MIDI channel at a time, so you can only play one sound at a time. External keyboard splits, for example, aren't possible.

Beyond that, Animoog includes modules for Orbit, which lets your note "comet" spin around its center as it follows the path, for even more complexity in timbral morphing. The Thick module adds bit-crushing digital distortion, Drive is for analog distortion, and Detune, which adds a chorus effect when Unison (which stacks voice for extra density) is set to 2 or 4.

The Delay module provides a standard digital delay with Time, Feedback, and Mix controls, and the Record module lets you record short sections of your playing, then loop and overdub them. Record also lets you Copy and Paste your recordings into other apps that support AudioCopy and AudioPaste, and you can use iTunes to extract your recordings for use outside the iPad. That's how I recorded the examples in this review.

Animoog is one of the most powerful music performance apps currently available, and one that turns the iPad into a genuinely expressive and creative synthesis platform. If I knew I was getting an iPad for Christmas, I'd want to have Animoog waiting in the wings, too. It's that good.

Thanks for this very detailed, in depth review. I first spotted Animoog for iPad a while back, and have been holding off because I could see I'd be spending a lot of time playing, experimenting, and learning. This article will help greatly with this process.

Your sound examples are very expressively played, by the way. One could say that the app is expressive, but it takes a musically expressive person to bring that out of the app.


rlainhart
Thanks, Adam, for your kind words - I'm glad you found the review useful. Animoog is a wonderful app, as I mentioned, and I think you'll have a lot of fun exploring it. Good luck!