Review: Modstep, The Most Powerful MIDI Sequencer for iOS?

Modstep is arguably one of the most powerful iOS MIDI sequencers around. We put it through its paces and were more than pleasantly surprised.Â

It’s no secret that the iPad has become a serious platform for music making, and thanks to the accessibility that the App Store affords smaller developers in terms of getting their products out to the world without incurring huge costs we have seen some really cool products emerge from independents in recent years. Modstep fits that description to a tee: it’s a fully-fledged MIDI sequencer that has been built from the ground up to provide a wide-ranging set of tools for working with MIDI both inside and outside your iPad. Having worked with it for a little while, it’s fair to say that I haven’t come across anything quite like it before.

When you first load Modstep it can seem daunting. It does a lot, and it’s not based on ‘emulating’ any desktop DAW in particular so there is a moderate learning curve to begin with. The manual is clear though and there are some good up-and-running videos on the website which taken together with a bit of playing around will teach you the basics relatively quickly. 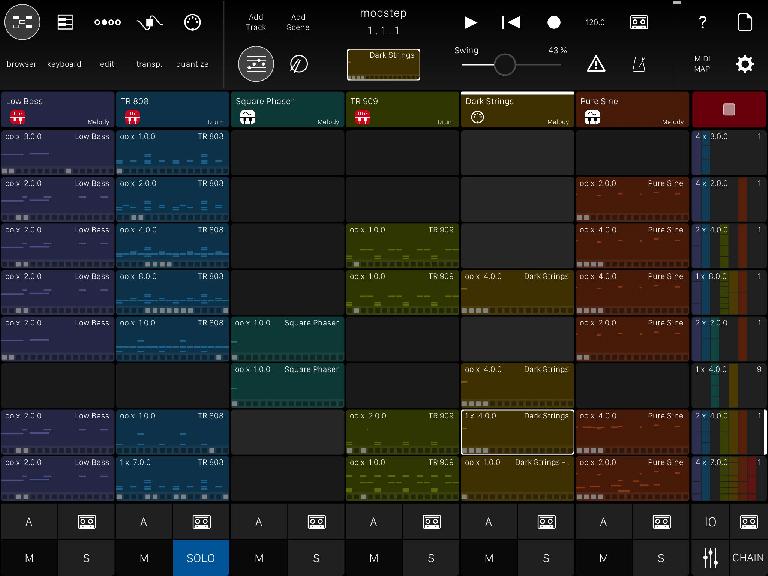 One thing that is potentially slightly misleading is that the name suggests, to me at least, that this is going to be primarily a tool for modulating and step sequencing MIDI. While it does indeed do both those things very well there is in fact much more to the app. It’s arguably a complete MIDI studio – albeit with a few omissions at present. But more on this later.

The main interface is made up of a grid of clips and scenes, a bit like you will have seen in other DAWs. If you press and hold on any clip you can name it, specify its length up to 16 bars and how many times it loops (or plays indefinitely), as well as importing or exporting MIDI files into the clip. Playing clips is done by tapping on them, a bit like in Launchpad, and you can set trigger behaviours so they come in after a specified time, though this is often best left set to the default “end of clip” jump setting to avoid timing issues. 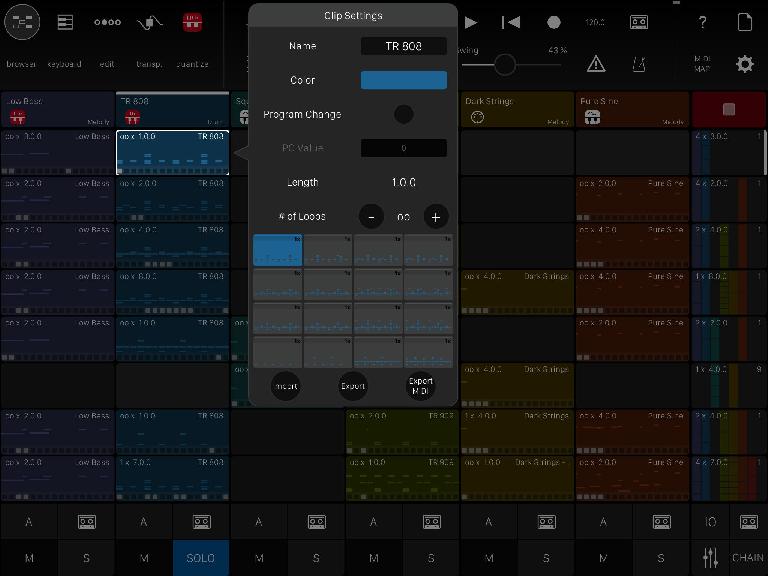 At the top left of the screen is a toolbar and from here you can tap to access tools to copy, paste delete, transpose and quantize data which work across the clip view and the MIDI note editors. Getting MIDI into a clip can happen in any one of several ways. Entering the Piano Roll view lets you enter notes by tapping, in either keyboard or drum modes depending on your instrument type. You can set a grid resolution here for either more precise or longer note input, and also access velocity, modulation and scale controls for any clip. A clever virtual joystick lets you move to other clips without having to go back into the main view first. 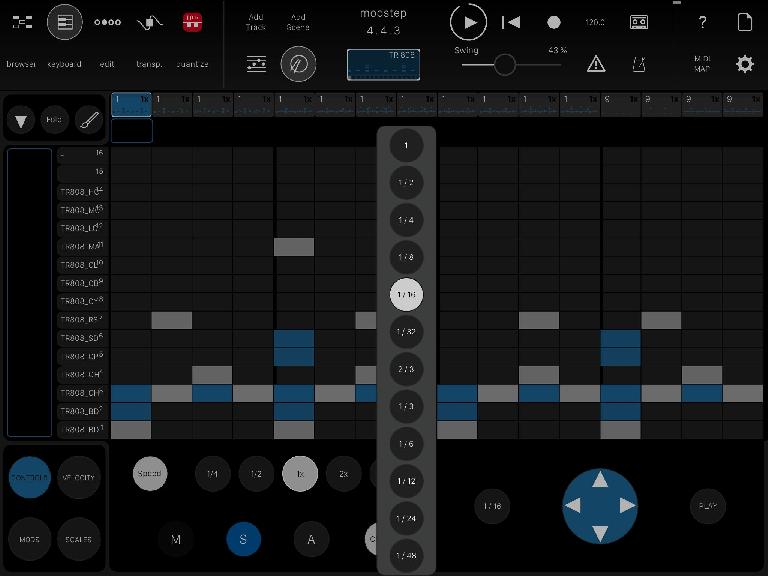 You can use a virtual onscreen keyboard to play notes too and use custom scales, which you can edit in the template editor. Modstep can send and receive MIDI using any connected hardware device as well as wireless MIDI and templates are supplied for a range of popular synths, with more being added all the time. If you go into Step Input mode you get a different kind of editor where you can program clips in non-linear fashion. This view also provides you with some more input methods including Pattern, Keys, Pads, Chords and Scales and has two X/Y modulation grids with fully customisable slots. There's song mode of sorts, with the ability to trigger rows of clips by tapping along the right hand edge a bit like you do in Ableton Live. 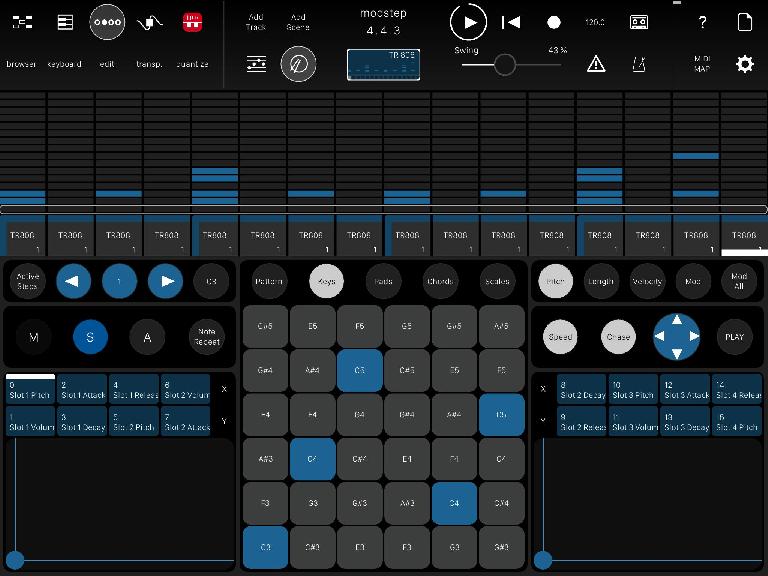 Of course you’ll still need some way to actually generate sounds and to this end Modstep comes with two instruments of its own. First is a sampler with full sound shaping controls, a bunch of content, effects and the ability to import your own sounds. There’s also a synth with multiple waveforms and again, lots of tweakable controls. These are good and provide a decent selection of presets, plus of course each can be endlessly modified to create your own sounds. 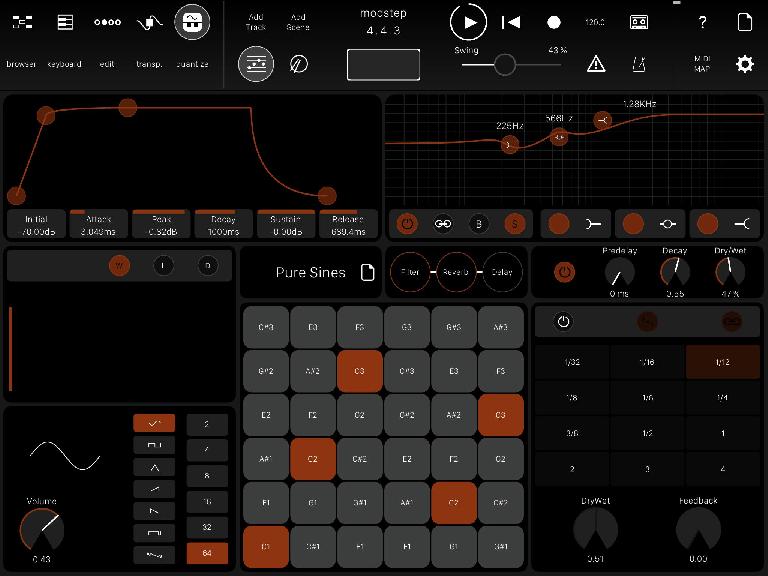 Instruments are loaded by dragging and dropping them from the browser into a channel, but Modstep also supports both Audio Units (in iOS format) and Inter-App Audio-compatible instruments and effects. With more and more iOS apps adding IAA compatibility and a small but growing marketplace for iOS Audio Units, this really opens up the system a lot. I have used IAA to route sound and MIDI between apps on an iPad, but I haven’t seen it work so seamlessly before. Where you have an IAA app like Korg’s Oddysei for example you still get “jumped” out to that app to tweak its sounds, but where you have an AU plugin, its interface opens inside Modstep. 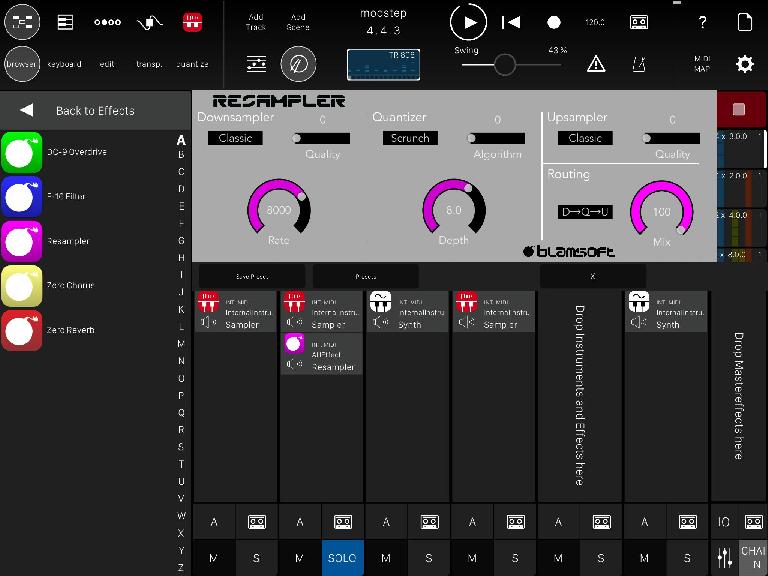 IAA apps are restricted to one instance per project, but AU instruments and effects can be used as many times as you like provided your iPad can power them all. Remember also that you can run external MIDI hardware alongside these if you have an external audio mixer, and those use no DSP power on your iPad. MIDI managenment is as simple as tapping the IO panel in the main view and assigning devices and channels to tracks. In my experience it just worked, and there’s very little fiddling to actually do. 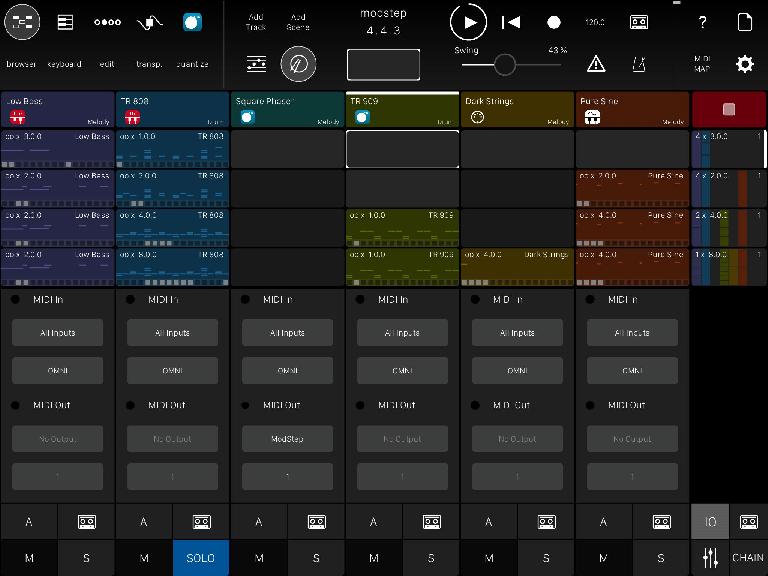 There’s a channel audio mixer plus another interesting feature which is the ability to record clips as audio loops which can then be exported via Audioshare for use in your DAW. The file management section could arguably be slightly tidier, but does make sense when you get to know it. Useful features like autosave of projects, copy audio clips to the sampler and export of MIDI clips all live here. Helpfully there’s also app-wide MIDI mapping which makes it simple to very quickly assign any hardware MIDI control to almost any part of the app as well. Studiomux is supported for streaming audio and MIDI to your computer directly over its USB cable and there’s Ableton Link too. 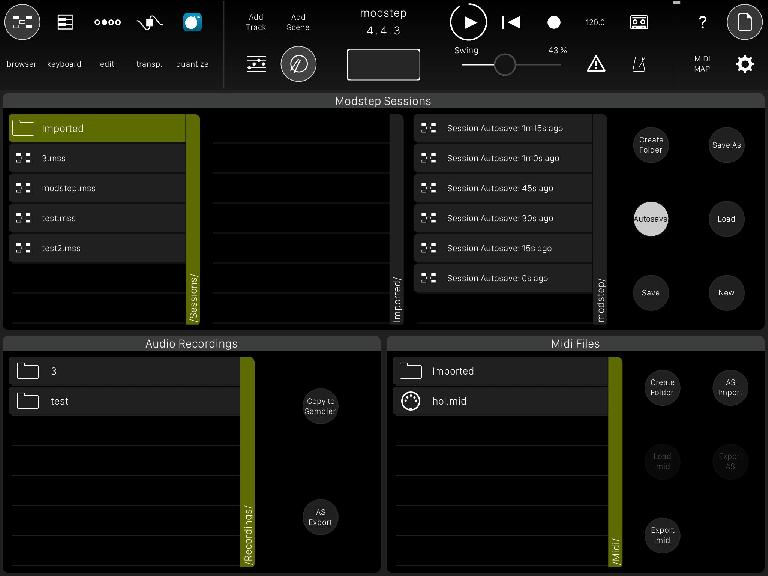 Modstep is a very powerful MIDI sequencer that takes its own unique approach to programming and modulating instruments both inside and outside the iOS environment. The IAA handling is really smooth and the ability to load Audio Unit plug-ins really expands your music-making potential. The interface takes a little learning but really not all that much considering the sheer number of tools on offer. There’s more to it than I have had space to really cover in detail.

There are still a few omissions: quantization is not yet customizable, though this is apparently coming in an update. Parts of the interface could arguably be cleaner and clearer to new users. Given the power already on offer however, I’d expect to see things like this – and much more – added in future. As it stands, Modstep is an excellent way to make music with MIDI on your iPad.

Cons: Quantization not fully customizable yet. No conventional song mode.