Language
Featuring 300+ percussions samples, the new ModeAudio Raw Material is a collection of diverse and interesting found sound samples. G.W. Childs finds out how well-recorded and mapped they really are.

All babies love banging on pots and pans. But, it’s musician babies that really love playing on pots and pans, and as you probably know, infancy is not a requirement. As an adult, I’m still doing it, as well as ModeAudio. Recently, they released Raw Material, a really sweet sample pack containing over three hundred found percussion samples ranging from tea kettles, utensils, snapping wood, and more— A veritable treasure trove of foley material and industrial treasure. But, does the pack stand up? Let’s find out!

Like all of the ModeAudio packs I’ve worked with, there’s always something extra and this tradition did not stop. I was excited to see an Ableton Live session included with the pack, so I fired it up, before even listening to the audio files, just to get an idea where the ModeAudio guys are coming from with programming. Surprisingly, there’s quite a bit that’s gone into this, besides mere audio. Which is kind of mind-blowing, considering the price of this pack.

Both audio Effects Racks and Drum Racks have been programmed for Live, and as soon as I started listening to the pre-programmed example loops, cascading across the top Scene of the Session View, I already started to hear the influences of old Depeche Mode, and several other sampling pioneers of the '80s, as I soloed different examples.

Thankfully, the raw samples, remain raw. No over-processing, while still nicely level-balanced. Thanks to the included effects racks, you can quickly get that coffee grinder sounding like a freight train.

The Drum Racks are great! However, I was a little irritated with the mappings. I tend to be a puritan for General MIDI mapping, as this allows me to drop in programmed beats of my own. And, because the mapping is always C1- Kick, C#1- Rim Shot, D1-Snare, D#1- Clap, my loops sound right, even though the samples change. While ModeAudio’s are close. They’ve mapped one of the Hi-Hats to D#1, and a few other strange choices. But, the mappings are the same all the way across the pack. So, one MIDI loop of your own from this pack will easily work with all of them.

What About the Sounds?

You can tell ModeAudio are getting more savvy to what the modern sound designer for music and video games really need in a library. Samples are broken down categorically by Metal, Ceramic, Plastic, Water, and more. So, if you know the sound you’re looking for, the organization is there. And, if you’re keeping your own database, I think you’ll find this one fairly easy to integrate without too much paperwork. 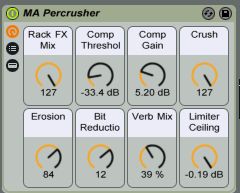 Sound design is crisp, and the audio sounds like the description. I particularly enjoyed the Kitchen Appliances directory, as there are more complex items like Dishwashers, Coffee Grinders, Kettles and more. Most people don’t realize the elaborately diverse range of sounds that can come from a simple dishwasher... and all dishwashers make different sounds! When you start adding these into percussive loops, and as sound effects, particularly when the sounds are being used in ways they weren’t intended, you get these sci-fi/ action hero environments that sound both organic, and industrial, all at once.

This is one of the best packs from ModeAudio I’ve reviewed, thus far. The sounds are well recorded, and audibly represent what the titles describe. The Effects and Drum Racks are thoughtfully put together. This is a library that is well organized for both the pro, and the enthusiast, at a price that one might think was actually novice. I would advise picking this up, before they raise the price.

Cons: Would prefer a more traditional drum mapping, in regard to the racks.