Custom built, this 64-button version of the much-admired finger drumming and performance tool is finally available. Rishabh Rajan put it through its paces.

After creating more successful mashups using the 16 buttons on the MIDI Fighter Spectra/3D Shawn eventually contacted Michael Mitchell from DJTechTools to build a custom prototype of a MIDI Fighter with 64 buttons! The first mashup Shawn created with this controller, Marble Soda, is still one of his most popular mashups with over 18 million hits on YouTube.

DJTechTools at that point did not consider mass producing the Review: Midi Fighter 64 and Shawn Wasabi was the only mashup artist to own one. Many MIDIFighter fans including me really wanted to get the 64 button controller. There was even a change.org petition with over 2000 supporters.

In April of 2016, an unfortunate incident of Shawn having his MIDIFighter 64 stolen led to DJTechTools, with the help of Garet Biglow (http://www.gbmidi.ca) creating a new prototype of the Review: Midi Fighter 64. They decided to create additional controllers for other hardcore fans.

Here’s a performance routine on the Review: Midi Fighter 64 by a Launchpad user, Kaskobi.

Finally, DJTechTools decided to hand-build and sell an initial run of 1000 of the Review: Midi Fighter 64s to the masses. These are all custom built in the DJTechTools factory in San Francisco. These 64s are built by a circuit bender and DIY maker named Sondra (I couldn’t find much information on her online).

The Review: Midi Fighter 64 comes in two colors, black and white. You also have the option of getting a clear or a solid bottom body. Personally I wish they had an option for a clear top as the bottom is never really in view. Since these are all handmade and specific to each customer, you get a DJTechTools Certificate of Authenticity with your name as the designer, the serial number and a polaroid of the controller. The device comes with a 1 year manufacture warranty so the product can be returned within that period if there are any defects.

UPDATE: The manufacturers have told us there are more than two colours available:

"While black and white ones are our main lineup we also make custom ones. Currently customers can also request theirs to be fitted with blue/pink buttons or have something cool like an all black unit with white buttons (and vise versa). Needless to say, these custom ones are the same price as the all black or white devices." 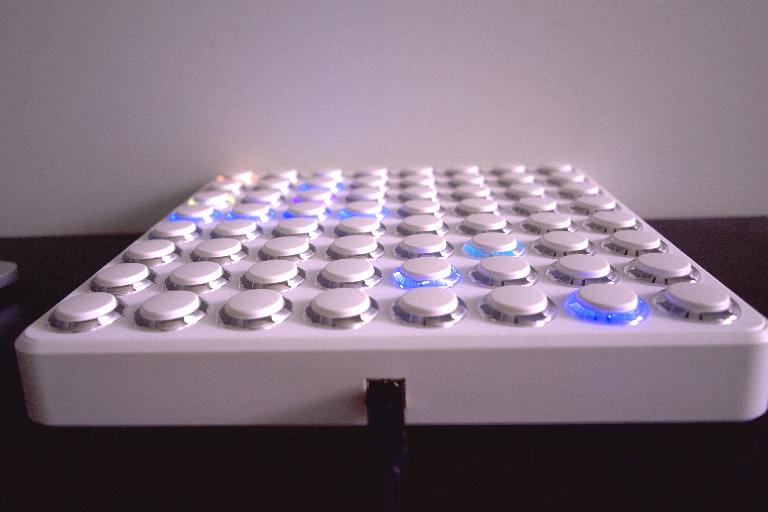 The hardware has a very similar feel to the MIDI Fighter Spectra except that it's 4 times bigger. The entire body is plastic including the sides, unlike the rubberized sides on the MIDIFighter 3D. You don’t get additional bank switches on the sides, which is understandable since there are enough buttons to never have to use bank switches, but to quote Justin Bieber, ‘never say never’. Shawn Wasabi in Marble Soda used way more than 64 samples in the entire routine so he assigned the bottom left 4 buttons as bank switches. So with that you can potentially have 240 slots for samples.

UPDATE: The manufacturers added the following on the bank switch issue:

"Since it doesn't have side buttons you can hold the top left/right buttons for 2 seconds to allow you to access the 2 available banks on the latest firmware. We offer a few different ways to handle this in the Midi Fighter Utility. If more is needed then you simply need to arm a track containing different sounds or use this method if bundling them in the same track is preferred."

The highly popular arcade buttons feel just as good as on the smaller MIDI Fighter. The RGB LEDs are super bright and are visible through the rings around the arcade buttons. Now it may be a bit unfair to call these LEDs true RGB as the color palette is limited to 19 specific colors, which includes white. Though, I wouldn’t consider this a major issue. I’m quite happy with the 19 color options. 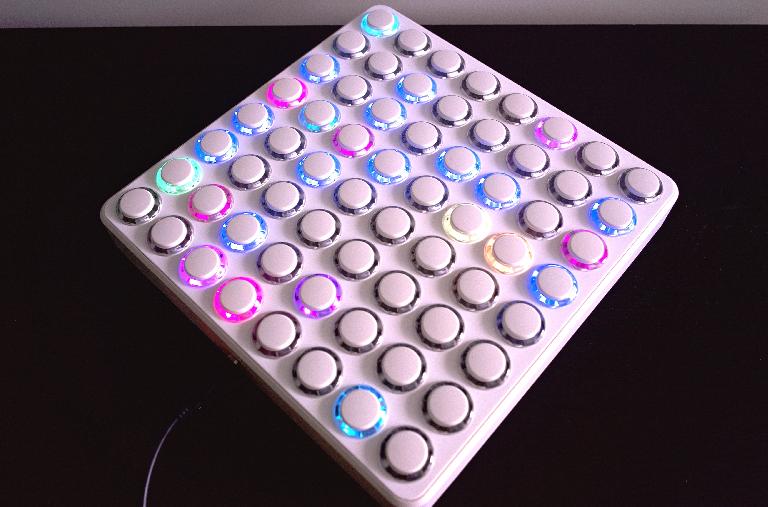 The MIDI Fighter utility application can be used to set the color of individual buttons and also specific lighting animation patterns can be selected. The buttons are ON/OFF switches so you don’t get velocity sensitivity like Ableton’s Push or the newer model Launchpad Pro. But what you do get is a very snappy response for quick-fire triggering of samples with a very smooth tactile feel. Performing on the buttons can be audibly ‘clicky’ and not too different from the sound of a mechanical keyboard. The buttons send Note ON/OFF messages or CC messages or both simultaneously. More on that later.

Aside from the MIDI Fighter Utility, you don’t get any software with the 64. You do have access to some really neat sound packs including one from Shawn Wasabi himself. These are Ableton Live sound packs so you will need to have that installed on your computer in order to use the sound packs. Technically the Review: Midi Fighter 64 can work with any software that accepts MIDI Note ON/OFF messages though it's more popular and convenient to use Ableton Live. 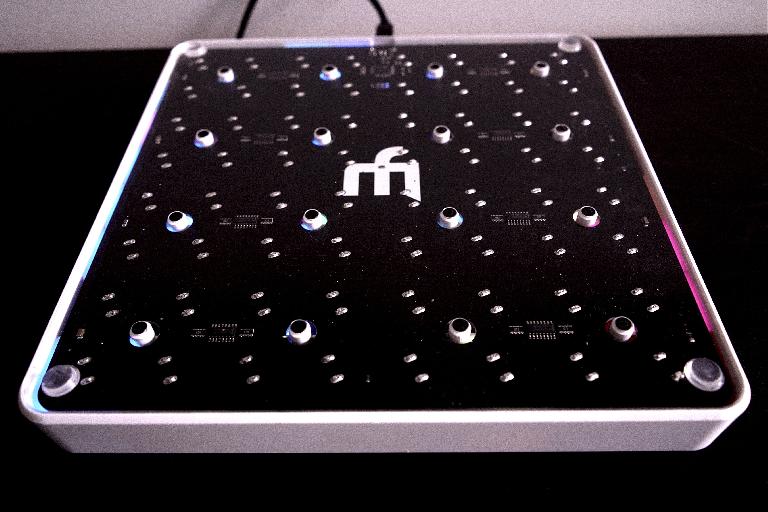 The integration with Ableton is nothing like the Push or even the Launchpad. You don’t have a ‘Scale mode’ or a ‘Clip Launch’ mode but with Ableton’s Drum Rack and streamlined MIDI mapping features, its a breeze to set up. There is a CC (Continuous Controller) & Note+CC mode where every button sends a CC message or a CC message along with a Note message when triggered. But again these CC values are fixed so you can’t really treat it as a continuos control but just to turn ON/OFF effects or to toggle parameter values from minimum to maximum.

If you have been creating mashups using the Launchpad’s User Mode, it will be very easy to translate those Ableton session to work on the Review: Midi Fighter 64. The only difference will be with the LED feedback. To create custom light patterns on the Review: Midi Fighter 64 you need to make sure the MIDI data is sent to Channel 3 on the MIDI Fighter. Everything else works just the same. Here’s a video explaining how to do this on the Ableton Push User mode. It works the same on that controller too.

Now if you have created mashups using the Ableton Push controller’s User mode and want to translate that to work on the Review: Midi Fighter 64, its going to be a lot of work. The MIDI note layout is completely different on the Push. The MIDI Fighter and Launchpad lay out the notes chromatically left to right in fours. So the first bottom 4 notes from the left on these devices will be C1, C#1, D1 & D#1. The next 4 notes E1, F1, F#1 & G1 will be accessible on the row right above. The Push does not follow this pattern. It lays out the notes chromatically left to right in eights.

So the entire bottom row on a Push from left to right will be notes C2, C#2, D2, D#2, E2, F2, F#2 & G2. It also doesn’t help that the Push starts from C2 rather than C1. So a mashup session created using the Push will be laid out completely differently when used with the Review: Midi Fighter 64. The samples for each note can be moved around but this can be an extremely tedious task.

The Review: Midi Fighter 64 is a great nostalgia-laced controller that is limiting in many ways but also equally rewarding. Great for mashups, finger drumming and creating visually exciting performance routines. It's priced a lot higher than a Launchpad Pro but considering that is is not mass produced in a factory in China the price is reasonable. I was expecting it to cost four times that of the MIDI Fighter 3D, but it's a lot less than that figure. 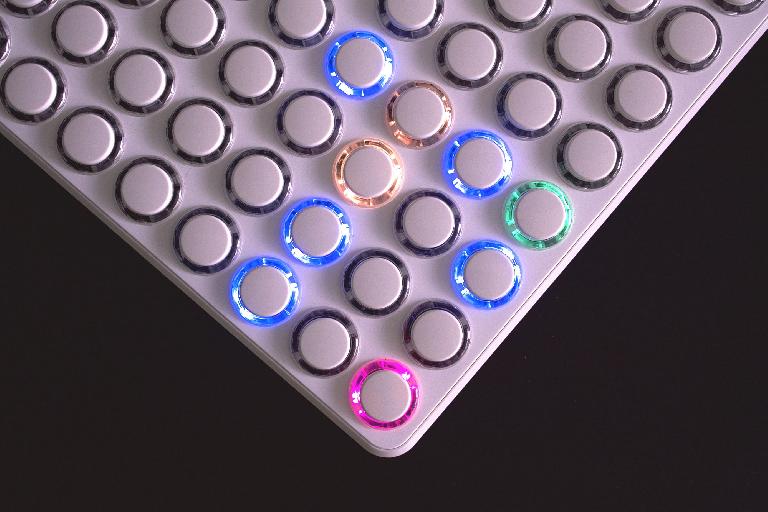 Considering the MIDI Fighter 3D and Spectra were already niche products, the Review: Midi Fighter 64 is definitely not for everyone. It does not have an out of the box solution like the Launchpad or Ableton’s Push. If you get one of these, you will spend some time setting up and customizing it to your performance routine needs. You can get some instant gratification with the included Live packs, but the fun of using a controller like this is to create something unique like the works by Shawn Wasabi.

Cons: A tad pricy. Only two color options for the hardware (white is already sold out).