Language
So you want to edit and manipulate audio as easily as you can MIDI? Multiple tracks? Polyphonic material? Hollin Jones finds out if Ceremony's Melodyne Studio 4 is the best app for your audio jobs.

Not so many years ago, something like Melodyne would have seemed like impossible magic from another planet. MIDI has always been pretty easy to manipulate but digital audio was for much of its early life a very different story. True, people made a virtue out of the fact that it would bend and warp when sampled and slowed down, but there wasn’t really all that much you could do with it beyond messing it up or cutting it. When Melodyne came on the scene it changed all that. Here was a tool that could see inside digital audio and let you alter certain of its characteristics, but without destroying it in the process.

Now at version 4, this iteration of Melodyne makes the first one look positively prehistoric. It’s almost on its way to becoming a production environment in its own right, albeit one with some pretty specialized features. At its heart is still the ability to manipulate polyphonic digital audio in astonishing detail, but there are some eyebrow-raising new tools as well, stuff you may not have even realized you needed. Some of these are admittedly restricted to the flagship Studio version, but others are not. Before we dive into the detail though, a few basics. 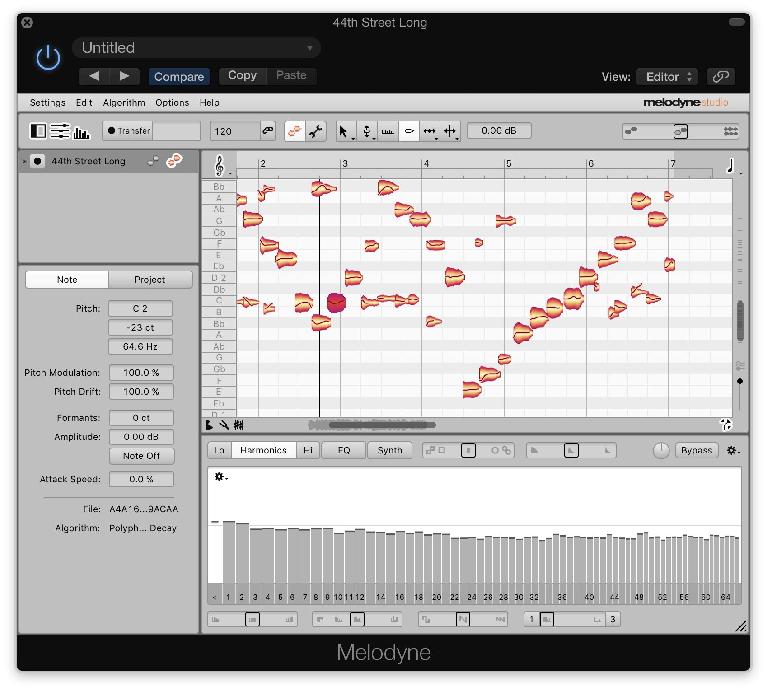 Melodyne comes in four versions : Essential, Assistant, Editor and Studio and you can find a precise breakdown of their features compared here. http://www.celemony.com/en/melodyne/editions-and-technical-matters#3555

All versions run both in standalone and plug-in modes and have ReWire compatibility, perfect for integration with Reason and other ReWire apps. When running in standalone mode, operation is slightly different in some ways. Mainly these relate to the fact that as standalone you have to import or record audio tracks into Melodyne, whereas in a DAW they’re “sampled” in from DAW audio tracks by pressing a button in real time.

Bring audio into Melodyne and it is analyzed for pitch, duration, formant, intonation and other characteristics. At this task, it’s second to none, able to pick apart even complex polyphonic sounds like stereo mixes and split them into separate notes inside its grid editor. It deconstructs more or less any sound into something resembling MIDI information, although it’s actually more powerful than that. I threw some complex stuff at it and it did an exceptional job of extracting it to editable data. 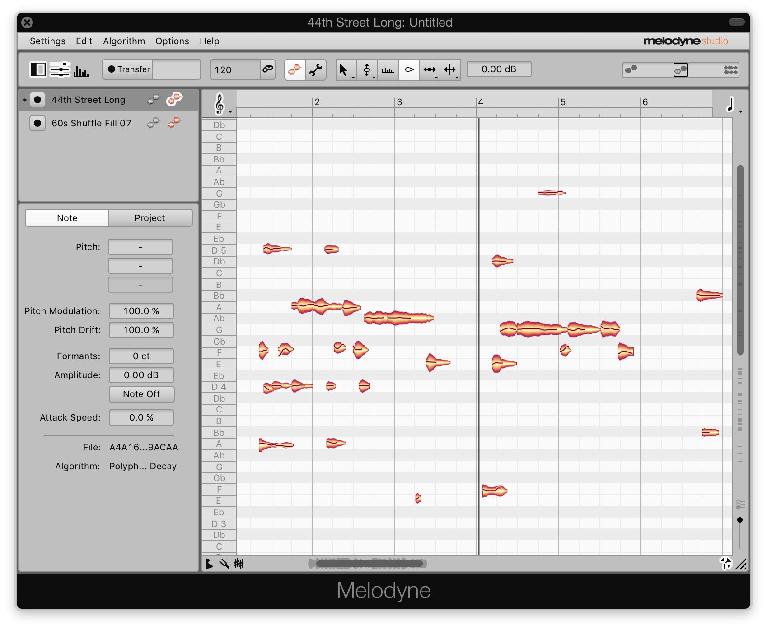 The Studio edition is able to display and edit all instances of Melodyne in a project from any single window.

Here’s where things get interesting, in the Studio version at least. You can now work on an unlimited number of tracks with Direct Note Access. A multitrack view can be enabled that allows you to see all instances of Melodyne in a project from within any one of those instances. What that means in practice is if you have Melodyne inserted on several vocal tracks for example, you can view and edit all those notes at the same time from a single window, changing them by the same amount, conforming them and so on. Or, just view some parts but edit others thanks to the show/hide controls. It makes editing multiple tracks infinitely easier. It would work with any type of source material, though you’re likely to be group editing sounds of a similar type. You now also get track-transcending macros that let you correct multiple tracks at once, and define one track as a quantize master and sync the others to it. 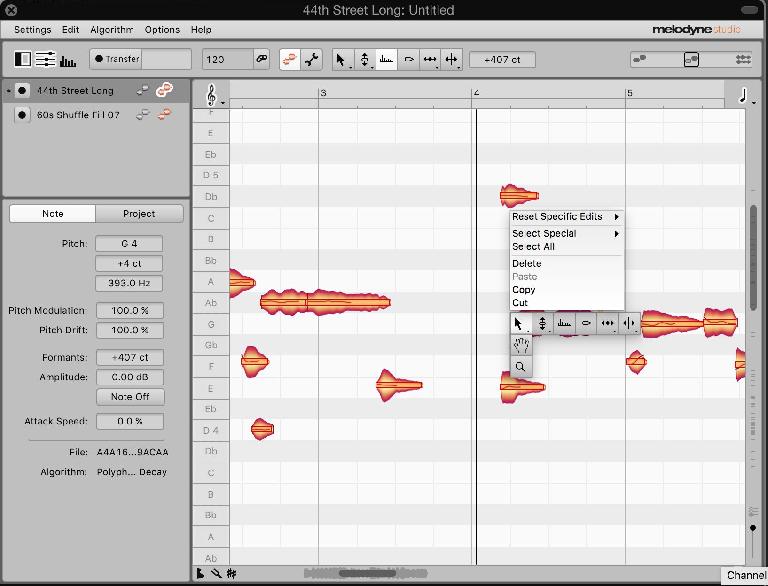 The tools are powerful but easy to understand.

If you’re recording into Melodyne, it can track the tempo and time signature of a live recording, generating a click that follows the musicians rather than the other way round and then providing this as a template to the DAW. This lets you add other MIDI parts without having to rigidly quantize the originals, or allows you to cope with actual timing problems without over-quantizing the feel of the original. There are multiple algorithms available depending on what kind of material you’re working with. Use Polyphonic Sustain for things like strings or organs for example, and Polyphonic Decay for pianos and guitars. If you don’t need Direct Note Access, the Universal algorithm is highly adept at accurately time or pitch stretching entire mixes. 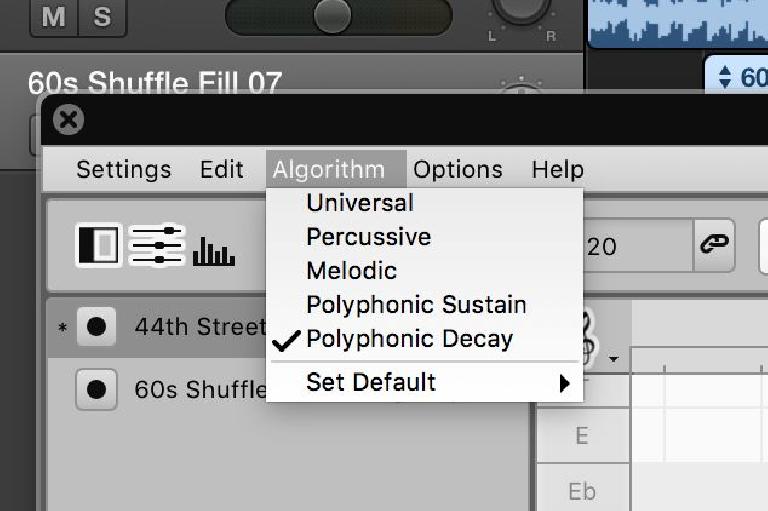 As well as multiple tools for changing the duration, timing and pitch of any notes within polyphonic audio, Melodyne Studio 4 has a new Sound Editor section that runs underneath the main part of the window. This lets you perform changes based on the partials that make up your sounds—partials that have been analyzed to enable Melodyne to do its thing in the first place. So whereas a regular EQ just acts on a fixed frequency range, here the tools adapt to the audio material itself. So you can change the “shape” of sounds as well as just their EQ, relate the timbre or envelope of a sound to its pitch and so on. It is sound shaping but in a greater depth than regular tools allow. It’s well worth checking out the videos Celemony has produced on its website to delve deeper into how this and indeed other features work. 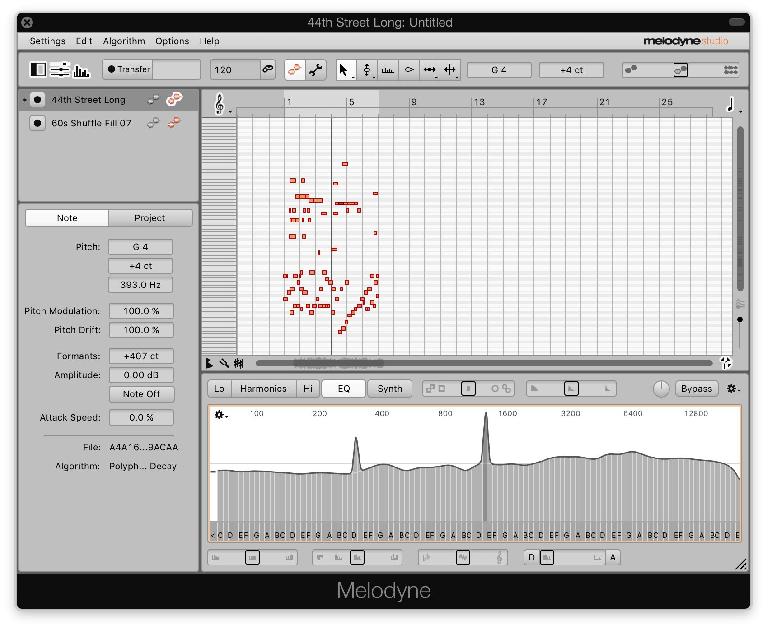 Melodyne Studio is fantastically powerful and arguably the best software of its kind around. You get a stunning level of control over even the most complex of polyphonic audio and correcting, altering and generally working with it is both extremely accurate and easier to get to grips with than you might think. For professionals, it’s likely to be something you turn to again and again for all kinds of tasks.

Studio is costly though, at $849. There are three other versions that might suit different kinds of users better, with varying feature sets. Editor at $499 gives you the key features but leaves out the multitrack functionality. Assistant at $249 works on monophonic but not polyphonic material, and Essential at $99 has a basic toolkit for editing pitch and timing. There are 30-day fully functional demo versions of the different editions available so you can try before you buy.

Although your higher-end DAW may include similar features to the more entry-level versions of Melodyne, the features in Editor and certainly Studio are pretty unique. Power users will definitely appreciate the multitrack editing and Sound Editor as well as macros that can be applied across multiple tracks. For manipulating digital audio, it doesn’t get much better than Melodyne 4.

Pros: Probably the best app around for manipulating digital audio. Direct Note Access for polyphonic as well as mono audio. New multitrack in Studio is a great timesaver. Apply macros to multiple tracks. Sound Editor gives even greater shaping power. Extremely accurate results. Easier to learn and use than you might think.

Cons: There’s quite a leap in price for the most powerful Studio version. If you have a higher-end DAW you may have some of the more basic features already built in.