Language
An 8-in, 8-out audio interface for under $400? M-Audio's new M-Track Eight comes bundled with Cubase LE, has XLR combos for all channels with Octane preamps. But does it make the grade? We find out.

The M-Audio M-Track Eight is a quick and easy way to get eight channels of audio both in and out of your DAW. Its simplicity in design will either make you smile or cringe, depending on what you're looking for. I spent some time with it and here's what I found… 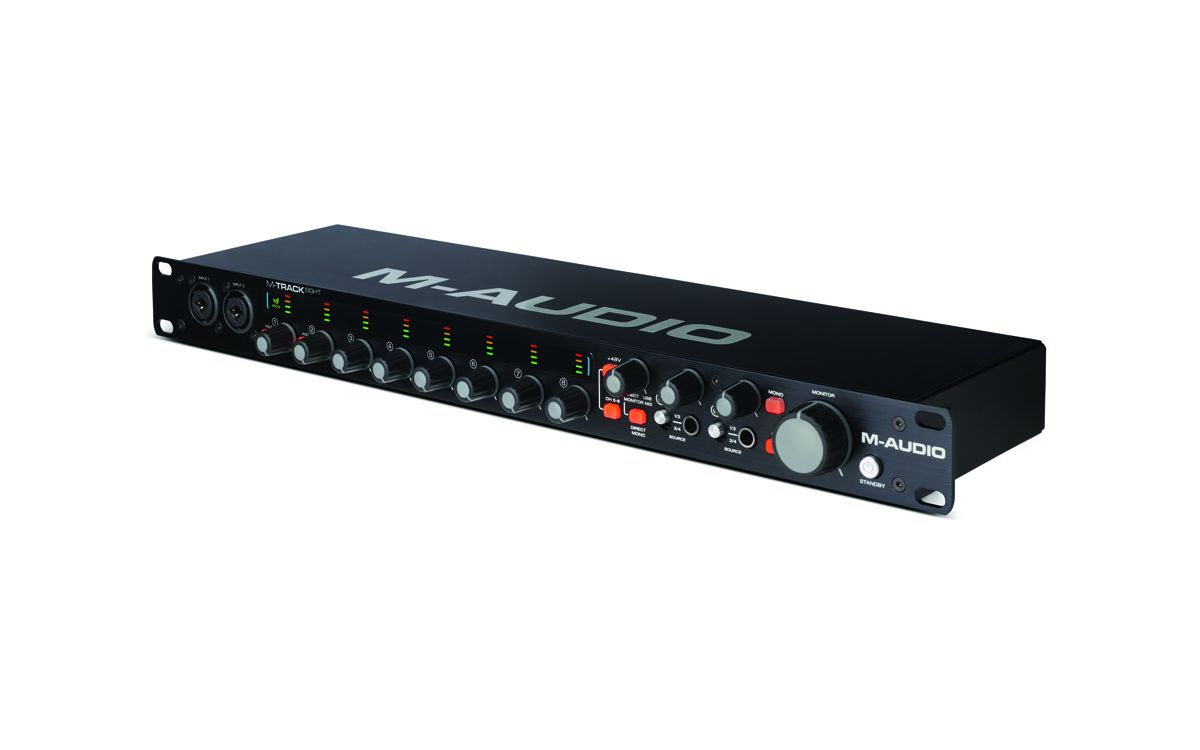 The M-Track Eight feels like a solidly built device. The knobs felt a little wonky at times, but they were large and in particular the monitor output knob is huge and easy to grab in a hurry. The metal chassis is sleek and all of the connections were firm and clean. The monitoring source selector switches were a little difficult to engage due to their close proximity to the headphone jacks themselves, but you'll likely be 'setting and forgetting' those switches anyway so it's not such a big deal.

If M-Audio is known for anything, it's that usually their devices do not require drivers or software to get you up and running and the M-Track Eight is no exception. I plugged it in, hooked up the USB cable and my system immediately recognized it and used it for the main output as well as an audio device in Logic. If you're just stepping into the world of recording, you can't get a simpler device than the M-Track Eight. You can literally be recording within minutes of opening the box. 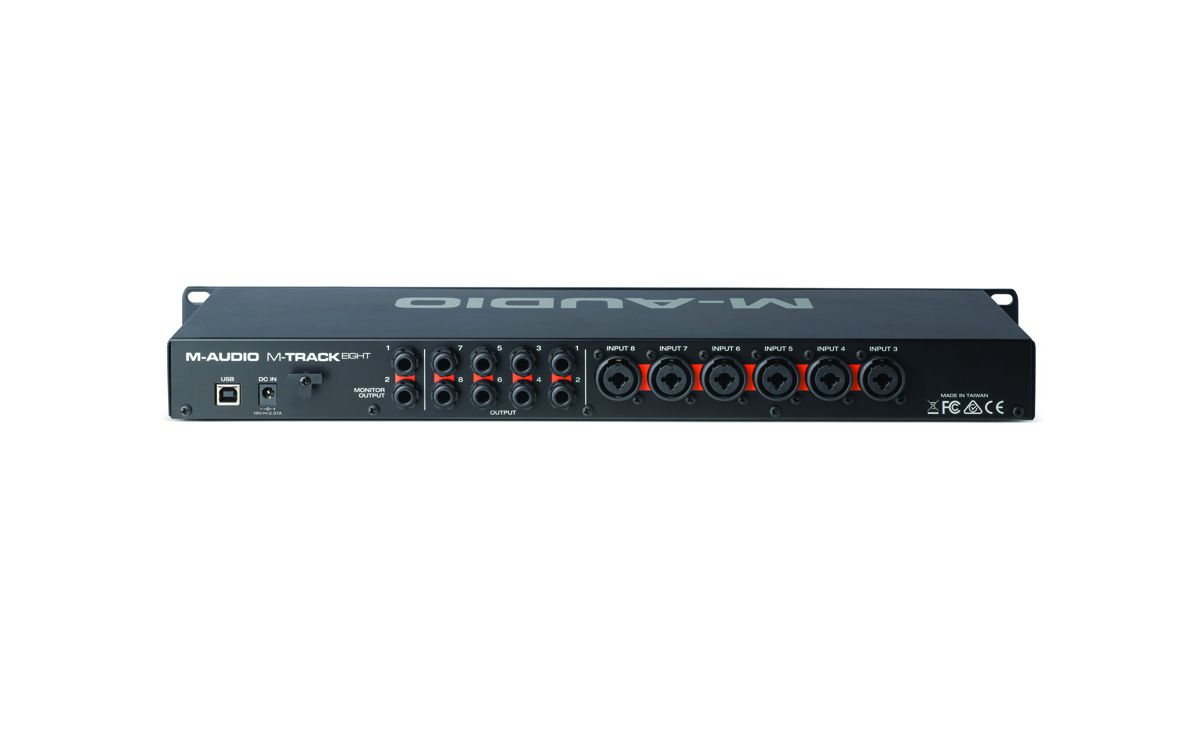 All of the inputs on the M-Track Eight are XLR-1/4” combo inputs, which is great for maximum flexibility. The first two inputs can be switched to instrument level and there is a hardware gain knob for each input located on the front of the unit. There are 2 headphone outputs that can mirror outputs 1–2 or 3–4, so it's somewhat up to you to configure what's going there inside of your own DAW. The device itself does not do any selective routing/mixing to the headphone buses.

You can monitor your inputs directly by using the direct/monitor mix knob, but you don't have any control over the mix itself. You just get a 'sum' of the odd channels in your left ear and the even channels in your right ear. You can make this sum mono with a button, but you can't adjust the volume of each individual input without modifying the input stage of the signal itself.

The Octane preamps are fairly clean and have adequate headroom for a device in this price class. They don't particularly color your sound much, and what you get out of the M-Track is always going to be fairly close to what you put in, signal-wise.

The M-Track Eight includes a free copy of Cubase LE—further helping the claim that you can truly be 'up and running' within minutes of opening the box. M-Audio has also partnered with Waves Audio to include some really nice plug-ins with the M-Track Eight. These include AudioTrack, Kramer Effects Channel, TrueVerb, L1 Ultramaximizer, and the Manny Marroquin Delay. I did not download them for this review as I already owned most of them and can vouch for their quality. They're good plug-ins and a welcome addition to any audio package.

Overall, I was impressed by the M-Track Eight. With any audio interface in the price class the M-Track currently occupies, there are going to be some compromises when compared with truly boutique (and more expensive) interfaces. The pros definitely outweigh the cons here and the M-Track Eight is a solid choice for someone looking to get started in the world of studio recording.

Alex
I'm guessign Matt must have reviewed this using a Mac, as one of its biggest flaws is that it *does* require drivers on Windows, and even worse, the drivers are buggy, which makes it a disaster in professional settings.

This is a potentially excellent product spoiled, as are several of M-Audio's products, by buggy Windows drivers. Just look at M-Audio's own support forum or search online for M-audio Drivers Crash to see the scale of the problem.

It's very clear that M-Audio really needs to get its act together and hire driver experts to resolve the niggles before what should be trivial issues drag the company's reputation down the pan.

The 'tech support' staff really don't help - they just try to point the finger at anything else they can think of other than an obvious problem with M-Audio drivers.

Whatever the root cause, if drivers installed on otherwise smooth running machines from a wide range of users and situations cause them to fall over repeatedly and frequently, then the drivers are not fit for purpose.

Writing reliable drivers is perhaps one of the toughest software jobs to do, but that is what we are paying good money for, not a pile of bundled software tat that we could get as a cheap add-on if we really wanted it.

Good software drivers cope with real situations on real machines, day-in day-out. Sadly for those of us who have bought into the promise of their hardware, M-Audio's current drivers for the M-Track Eight do not do this.

The unit also gets very hot in use (and takes a lot more power than ought to be necessary). The line inputs go into clipping at rather low levels for 'professional' hardware.