Language
There are more monitor speakers coming to market for the home studio/bedroom studio music producer than ever before. M-Audio's latest offering, the AV42, are compact, well balanced and economical.

Desktop speakers are no longer just something you pick up as an afterthought in the computer shop. Pro audio manufacturers have begun to produce speakers that aim to combine the small footprint and connectivity of computer speakers with the higher fidelity of more serious boxes. They’re not necessarily aimed at hardcore music producers, rather those who want accurate reproduction but also more consumer-friendly features.

M-Audio’s AV42s are named in a way that should give you a clue as to their focus: audio visual usage. In practice this means anything from music playback to gaming, watching movies and yes, producing music. They are smaller and lighter than the images might lead you to believe, with a decent build quality, although I found the shiny plastic area surrounding the tweeter looked a little cheap in real life. The right speaker is passive and must be connected to the left speaker using the bundled speaker wire. 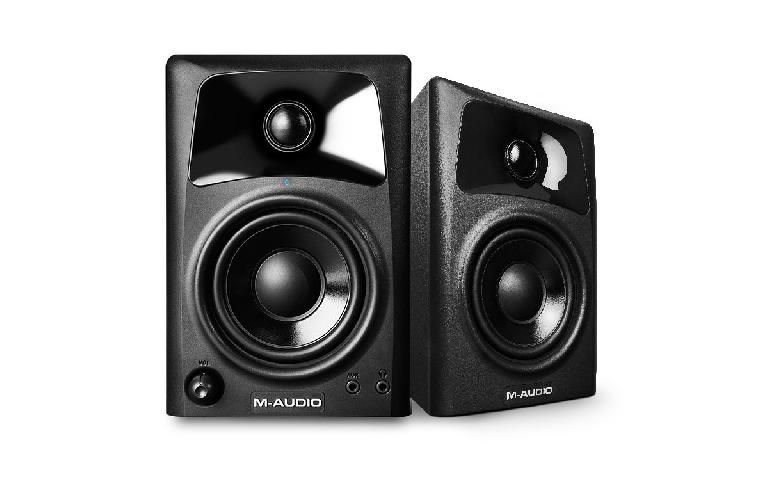 You plug the left speaker into the mains as it contains a 20W/channel amp with Class A/B architecture. On the back you’ll find phono inputs and a phono to mini jack cable is provided, as well as a mini-to-mini jack cable for connecting things like phones to the port on the front. A headphone port is available too, and there’s a volume control on the powered speaker. In terms of connectivity, M-Audio is guessing you’re likely to plug in from your mobile device, laptop or phone. If you do want to connect from something like a mixer, a simple phono cable will do it. 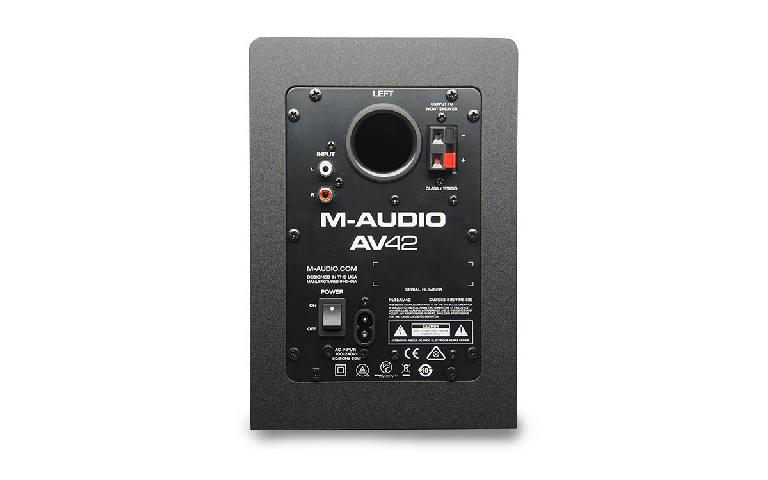 The speakers are rear ported and have a 4-inch woofer and 1-inch tweeter apiece. The sound they produce is well balanced and surprisingly accurate, especially for budget speakers. Bass is solid and tight thanks to the ports, but not overwhelming. Top end is crisp and mids present and correct. The laws of physics mean that small speakers are never going to sound as massive as large ones can—they simply can’t move enough air. But the AV42s did a good job with everything I threw at them as far as general music and video listening goes.

These are perfectly decent speakers on which to work on music projects, though entry-level speakers are always going to lack the soundstage and clarity of more expensive studio models, since they aren’t really designed for strenuous production work. Certainly when it comes to mixing you should try to work on the best speakers you can get access to. That said, these will be a step up from any kind of standard computer speakers you may be using at present. The provision of an aux in and headphone out are useful and the footprint of the speakers is small enough that even cramped workspaces will be able to accommodate a pair. If space is ridiculously tight, M-Audio also makes the slightly smaller AV32s.

Cons: They are called AV, so designed primarily for general media consumption and gaming.